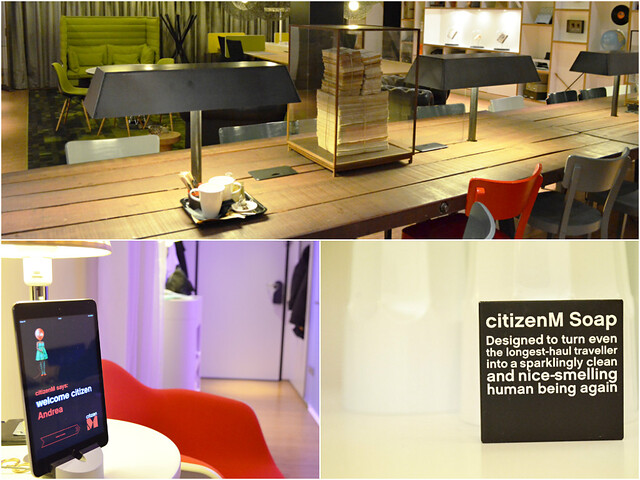 When did city hotels become so cool? I can say, hand on heart, that staying at the citizenM in Glasgow was the best British city centre hotel stay I’ve experienced, even if I did feel I might need to spend a few hours in hipster school before stepping through its raunchy red entrance. Fun, funky and functional, staying there is a blast; I am a devout citizenM convert.

Location
Located on Renfrew Street, citizenM is close to the shops of Sauciehall Street, Glasgow’s theatre district and the world’s tallest cinema, Cineworld. There are plenty of restaurants and bars nearby. Buchanan street bus station is about a 5 minute walk away whereas Glasgow Central and Queen Street train stations are roughly 10 minutes on foot.

Rooms
CitizenM have completed destroyed the clearly outdated notion that city centre hotel rooms need to be basic, small and dull. There are 198 vibrant pods with king-sized beds which take up a good area of the room. The flat screen TV is also huge, offering a great range of free movies from old classics to latest DVD releases. The bathroom is a sort of DayGlo cubicle. The colour scheme is up to you as you control ambient lighting by way of a tablet MoodPad which also controls the television, blinds, temperature and wake up alarm. A fantastic little toy. 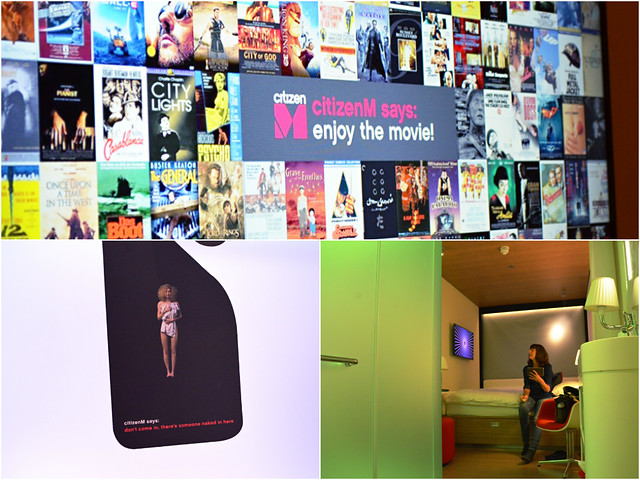 With a sort of IKEA on LSD style approach, citizenM have even managed to make room for a small desk and a sink within the confines of the room. Storage space is under the bed, which works quite well. In short, the rooms are incredibly well thought out and look fab into the bargain.
There are loads of little, original touches that help keep a smile on your face, from messages on soap and cushions to a do-not-disturb sign with a difference.

Facilities
From the second you walk through the door, it’s obvious you’re in for a totally different experience. It’s self service check in where you even create your own room keycards. There are staff on hand to help out, so even any few remaining newbies to working on a screen don’t have to worry. It actually works a lot smoother than some hotel receptions with an army of staff.

Communal rooms are as fun and funky as the bedrooms and are more like an ultra cool bar than a hotel lounge. The real bar area doubles as a restaurant and we were tempted to just stay in and eat in drink as it was so sexy and welcoming looking, but we only had one night and wanted a wee taste of the Glasgow outside of the hotel. It was touch and go for a moment though. Similarly, we were tempted by their full Scottish breakfast but we’d already decided on Jack McPhee’s around the corner – I fancied a greasy café type experience. 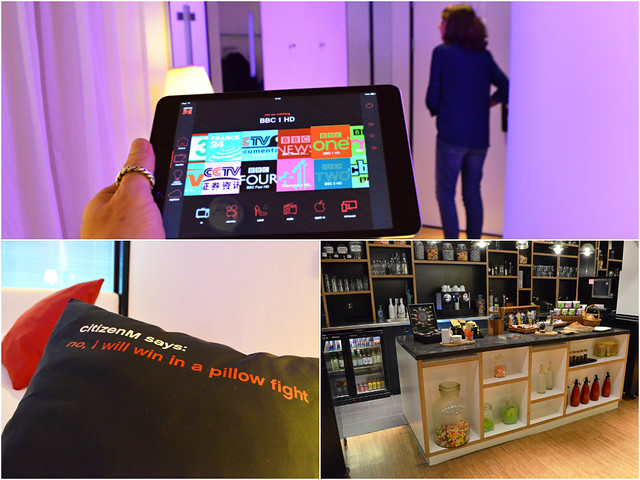 There are 24 hour refreshments available in a lounge that could have been titled ‘if hipsters designed libraries’.

Our train out of Glasgow wasn’t until the afternoon, but it was no problem to leave the luggage whilst we went shopping. Everything was no problem. CitizenM just made a stay in the city all very easy. That might sound odd as surely it’s what city centre hotels are there for, but it’s not always the case. This was effortlessly easy thanks to the way the hotel is carefully designed to meet the needs of urban travellers.

I can see that people who like their hotels to be on the conventional side might not fully appreciate citizenM’s hi-tech style and quirky sense of fun, but the bottom line is next time I’m in a city with a citizenM hotel, that’s where I’ll be staying.