The taxi ride from the airport hardly inspired. All I could see was a flat, beige world with virtually nothing of interest. There aren’t many locations we’ve been to where the journey from airport to final destination didn’t give some flavour of what to expect. But there was nothing. Before becoming Sal in the 16th century the island was known as Llana – flat. Pretty much a case of say what you see.

I didn’t know a lot about Sal, one of the Cape Verde islands, before we touched down. I knew plenty of people who’d been and the description had generally been ‘good weather, great beaches, not a lot else.’

The barren landscape beyond the dusty taxi window backed up just about everything we’d been told. 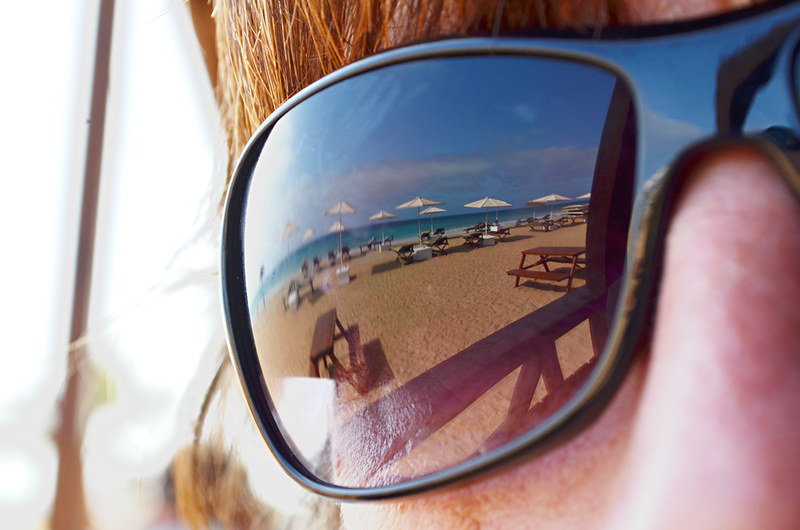 And yet judgement was reserved. We know from experience the reputation of popular holiday destinations is often created by the masses who don’t stray too far from their hotel. For example, the Tripadvisor forum for Cape Verde seemed to be full of people who thought Cape Verde was only made up of Sal and Boa Vista. Hardly credible sources.

Santa Maria on Sal
Our first stint in Sal was for a period of around eight hours; the time between landing and catching an internal flight to our true destination, Sao Vicente. It was just enough to get a taster flavour of Sal. The Hotel Morabeza kindly looked after our luggage, leaving us free to explore Santa Maria, the island’s famous tourist resort and a place that Cape Verdeans on other islands would tell us had sold its soul to the devils of tourism. They’d clearly not been to some of the mass tourism fuelled places we know. 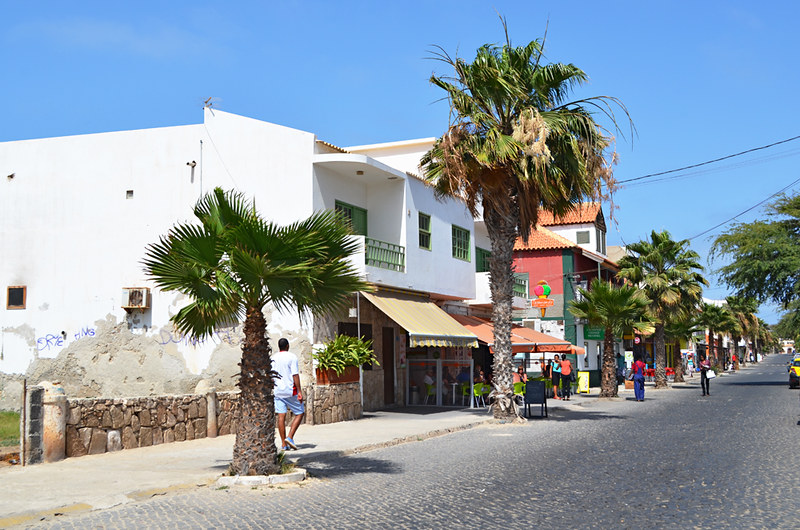 We expected a characterless resort. What we found was a little town that wasn’t without charm and which had a vibe that felt part African, part Caribbean. Santa Maria’s main street is a cobbled affair lined by bubblegum pink oleanders, palm trees and modest, low-rise colourful colonial buildings, many of which are home to bars, cafés and restaurants.

Nothing I had read suggested it was a rather pretty little town. 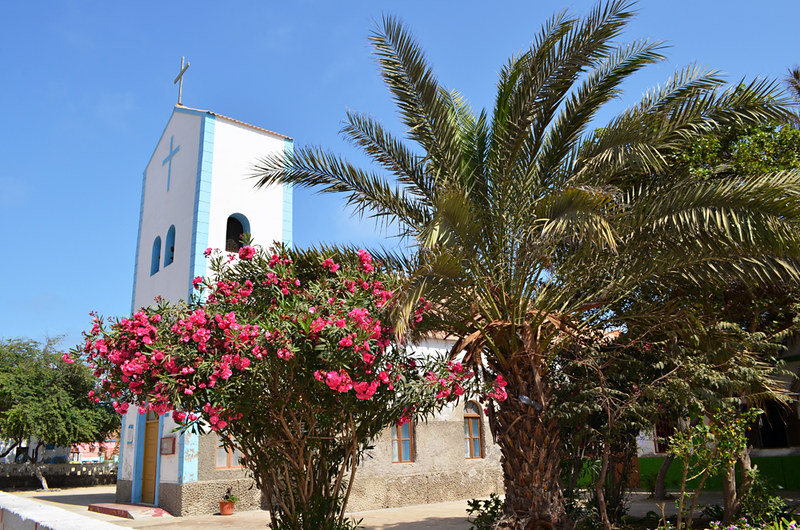 Our first stop was to change money at a bank which was mostly filled with locals, waiting quietly and patiently; a reflection of the laid-back atmosphere on the streets outside. The cashier was delightful, her huge smile infectious.

As we explored the town a few people tried to coax us into souvenir shops, but not in a heavy way. It quickly became apparent that Santa Maria wasn’t one of those places where you get hassled to the point it’s puts you off leaving your hotel. And yet the streets were hardly brimming with tourists. Re-reading travel sites after we returned, I got the impression many people didn’t experience much of Sal outside of their all inclusive hotels. 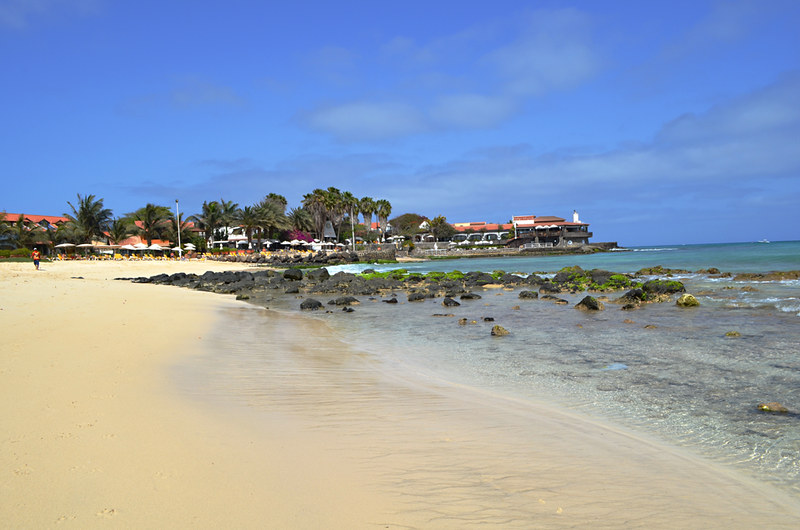 The African sun had brought on a raging thirst, so we decamped to a randomly chosen wooden beach shack bar. Angulo with its wooden benches, surf board ceiling and billowing muslin curtains was the sort of beach bar I could easily spend time in, a lot of time. It had a compelling feel-good factor to it, especially with a pint of Strela beer in hand. The other customers around us included what seemed to be a mix of locals and escapees from the big hotels. The food placed in front of the people at the next table looked decent and not typically bog standard tourist fare, it got my juices flowing anyway. 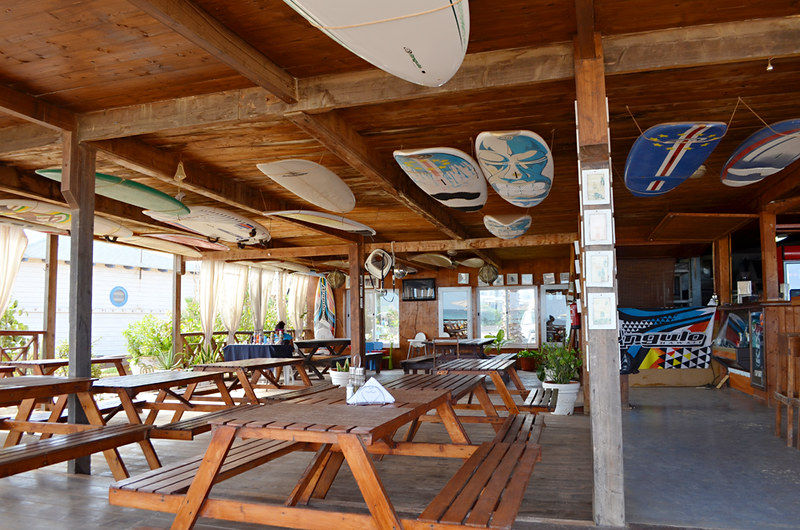 There was a temptation to just stay put to eat dinner, but a few places in the centre of town had looked interesting. With the sun rapidly dropping, we left the sandy scene and strolled the cobbled streets back towards rua de Junho, checking menus as we went. One place had been recommended for its cachupas but the prices on the menu seemed excessive. Not expensive in real terms, but elevated to take advantage of the tourist market.

After dark the Santa Maria streets felt no less safe to wander than they did during the day. The difference between bars and restaurants aimed at an audience who wanted ‘back home’ transported to an African island became more marked. Some bars advertised Sky Sports and British pies whilst from others the sound of bad and dated karaoke acted as an effective forcefield that made us give them a wide berth. We actually sat down at an attractive looking beach-front restaurant, but one look at a menu, which had not the slightest flavour of being in Africa, had as on our feet and out of the door. 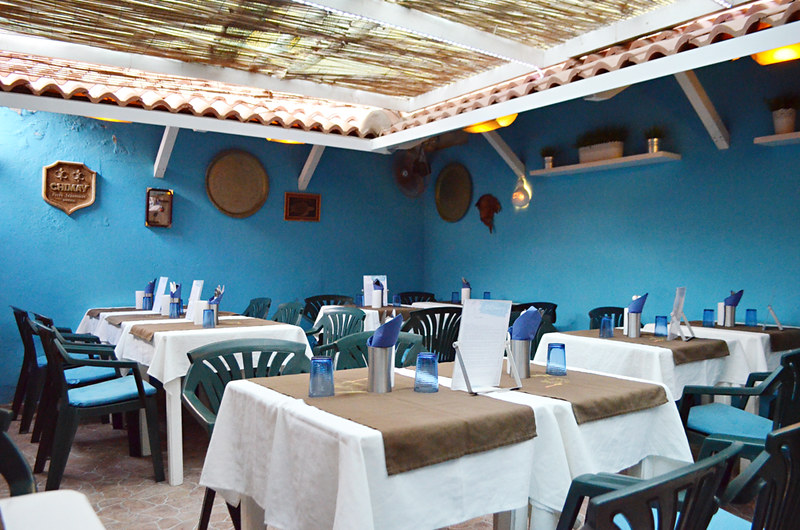 In the end we moved in a street to where the Afro-Caribbean influence was strongest and took a chance on OCaranguejo, a restaurant whose interior was hidden as it lay at the end of a small corridor/alley. The reason? It had francesinha on the menu.

It was the perfect place; an unassuming little courtyard with a cane roof and bright blue and white walls softened by creative lighting. It felt cosy, welcoming and local; the menu included a mix of Portuguese and Cape Verdean dishes. Whereas I’d decided on the francesinha before entering, Andy went for a Cape Verde version of chicken curry. Both were a cracking introduction to food in Cape Verde and set us up nicely for our onward journey. 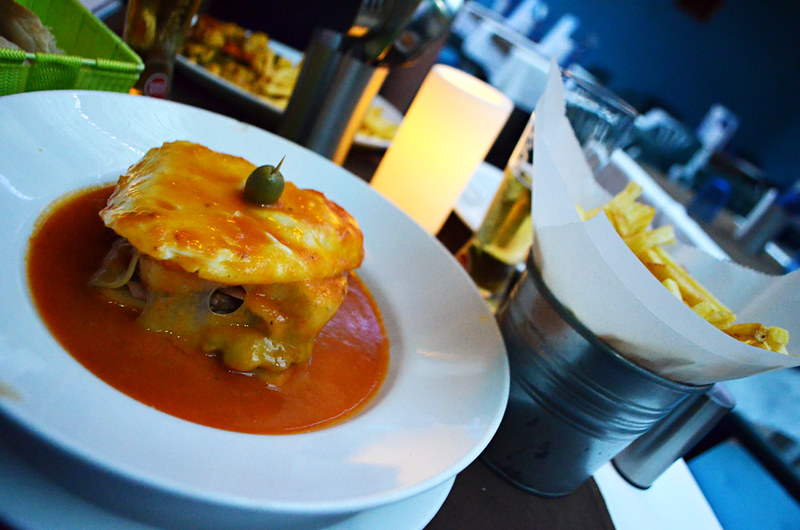 Our Cape Verde trip had been planned to end with a night in Sal as our flight home was an early one. Before visiting we hadn’t been looking forward to ending the trip in a resort we expected to be a soulless, purpose-built mass tourism hell. After a few hours in Santa Maria we’d learned yet again that you simply can’t trust the opinions of people who rarely stray from their hotels. 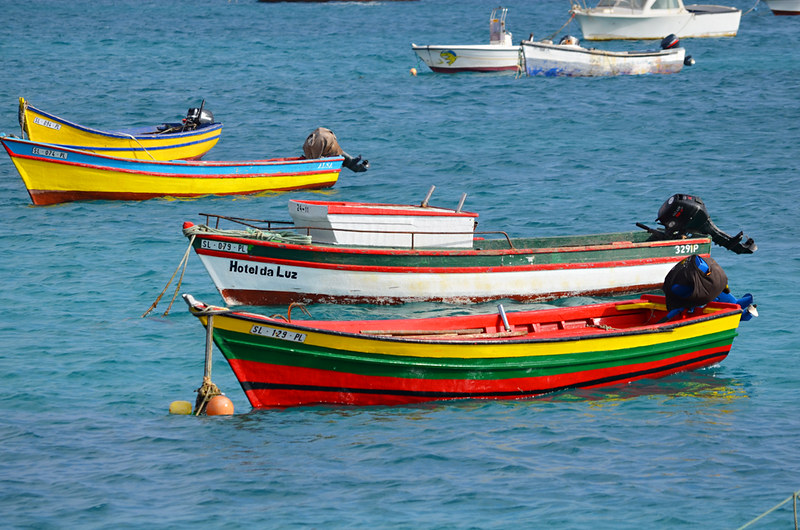 Sal might not have much more to it than beautiful beaches and a sunseeker-friendly climate, but as resort towns go, Santa Maria is okay. It has far more of an attractive personality than many, many purpose built resorts I know and as a place to chill out after a week’s walking in Sao Vicente and Santo Antao, it was absolutely hunky dory.