Friends are currently travelling around South East Asia, their journey starting in Thailand’s watery capital, Bangkok. Images posted on social media provoked memories of staying there. Memories dominated by journeys up and down the Chao Phraya on a motley selection of craft; some swift as speedboats, leaving dancing plumes of spray in their wake; others lumbering along the wide canals as if they were taking time to enjoy the riverside scenes as much as we were. After a day’s exploring we’d sit on our hotel room’s generous corner balcony, entranced by the 24 hour cycle of life on the river.

Water does that, it hypnotises. And anything that happens to be nearby is touched by its magical spell. 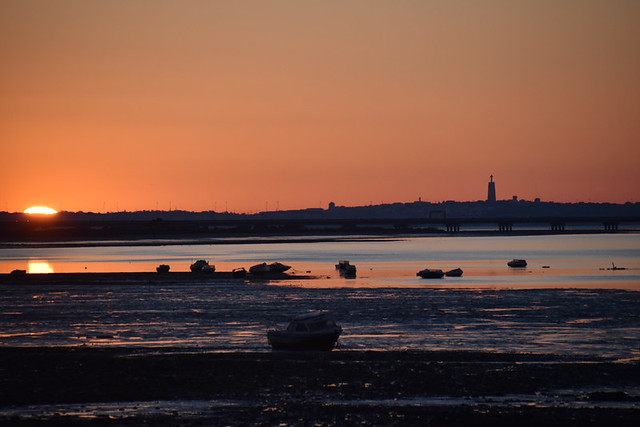 Sunset on the Tagus
As the wintery sun yawns and slips towards the duvet of the horizon there’s a mini pilgrimage in Alcochete on the southern banks of the Tagus. The place of worship is Alcach, a bar with jazzy sounds and chairs facing west. At first the glare from the last sunburst is too much to look at and we turn our attention to watching the first twinkling lights from the big city on the other side of the water. Then it’s gone, an upside down farewell smile giving way to an endless mauve band. The pastel shade doesn’t streak across the sky like many dramatic sunsets; it more cuddles the heavens in a loving embrace. The still waters of the Tagus act as a mirror, doubling the impact. It’s the sunset of dreams, calming and warming. As a black curtain descends on the dusky performance we finish our drinks and head back to our hotel across the road. After two chilly steps we realise the warming bit was courtesy of the bar’s outdoor heaters. 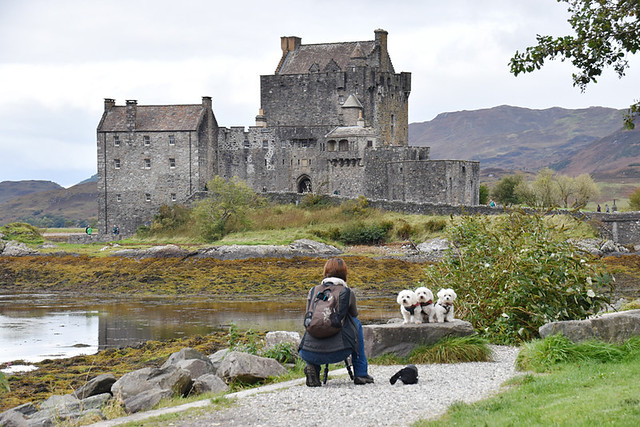 The dogs of Eilean Donan
Long have I wanted to gaze upon Eilean Donan Castle, a thirteenth century centrepiece where three sea lochs converge. But then so, apparently, has every other visitor to Scotland – eager to take photos of a shortbread tin scene which typifies the wild and wanton romanticism of the Highlands. The castle’s car park is a heaving, multinational meeting place. But I’m canny, I steal away from the pack and head away from the castle to a more serene spot with equally commanding views. It is empty, more or less. The more or less bit being a lone photographer who has carefully positioned three neatly groomed, cuter than cute white dogs wearing tartan collars. They occupy prime position on a flat rock, with the castle on the loch filling the background. The photographer calls for them to look her way. Two does, one doesn’t. It is more interested in what I’m up to and stubbornly refuses to pose for her camera. The defiant wee dug ruins her shot, and in doing so enhances mine. 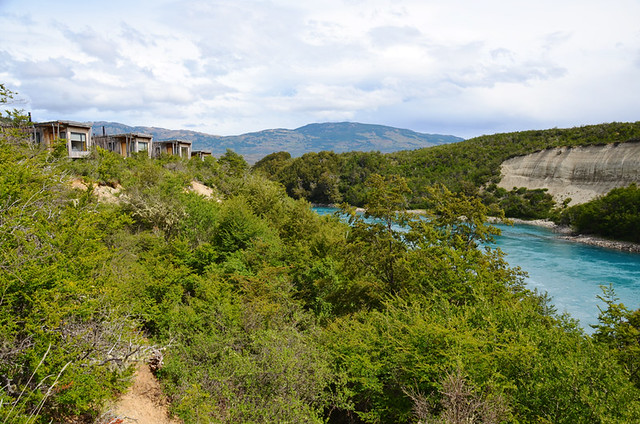 Wine and water on the Baker River
“You can’t take a bottle back to your chalet, the lodge owners don’t want to risk anyone spilling wine on the bed linen.”
We’re in the middle of nowhere, it’s not late, and the embers of the sunken fire in a showcase-worthy lounge overlooking the Baker River in Chile have been allowed to die down, taking it out of the running as a venue for a post-dinner wind down. We’ve paid a substantial amount to be there.
We explain to the lodge’s manager why it’s a ridiculous rule which deserves to be ignored, and take the wine back to our wooden chalet suspended high above luminescent glacial waters. After dark it’s cool outside, and a wood-burning stove inside makes it invitingly cosy. But a seed has been planted. The bed linen is expensive and snowy white. Every time I raise a glass to my lips I can feel the magnetic pull of the plump duvet. I know exactly how this is going to play out if we stay indoors. We take our wine outside and onto the small balcony-perche. Below us the invisible river roars a lively song whilst from the silhouetted forest canopy opposite, a backing group of unidentified night birds add an exotic, improvised chorus of clicks, howls and haunting chirrups. The manager has done us a favour. 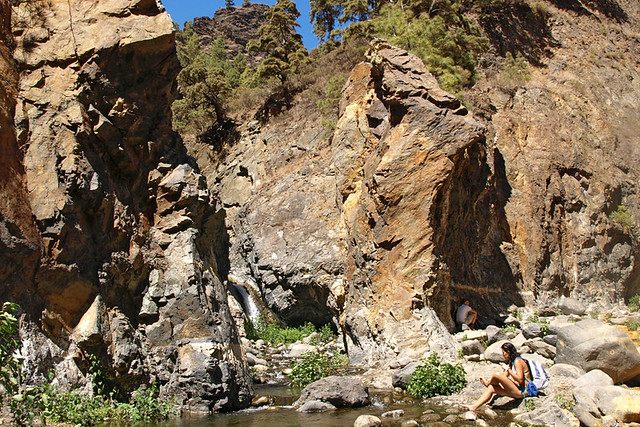 The colourful watery cauldron
The bikini-clad girls sit on a rock washing grit from the soles of their feet. An everyday summer scene of sunbathers at the water’s edge. Except this water’s edge lies kilometres inland, in a gorge leading into the heart of La Palma’s Caldera de Taburiente. It’s an image which feels slightly off kilter. We follow the cooling river upstream to where it narrows and turns mustard-coloured; a mineral-rich teaser of things to come. The walls of the barranco tighten their belt in an apparent attempt to squeeze out inquisitive explorers until, ahead, the path appears to run out at a mini waterfall. We almost give up, convincing ourselves we’ve somehow taken a wrong turning. But we scramble up the slippery rocks… just in case. It was an optical illusion, a false ending. The gorge curves sharply and there before us lies one of the wonders of the Canary Islands, a waterfall cascading over an array of spicy colours – paprika, turmeric, ginger, cumin. We have reached la Cascada de Colores. 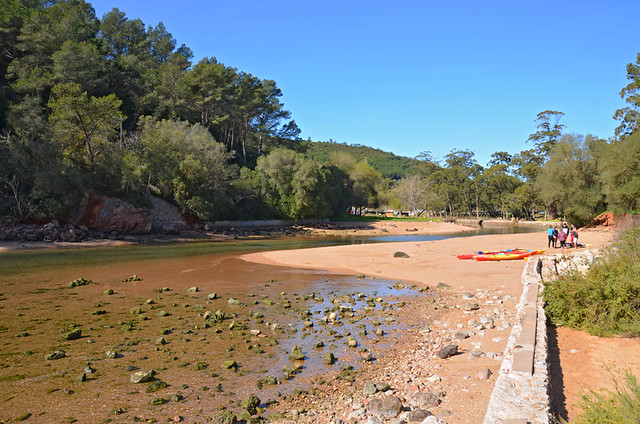 What’s in the bottle?
Contrasting bookends. Where the river flows into the estuary there is an Italianate villa, a throwback to a different era; halcyon days when glamorous darlings toasted fame and fortune on a Tuscan-styled balcony overlooking the Sado Estuary. Now it lies abandoned; although its star quality hasn’t completely faded. Beyond the picnic tables at Parque da Comenda, where the river narrows, is a shed of a kiosk. It has a small, make-shift terrace with polythene windows. The terrace is open only on the side facing away from the river; its patrons clearly aren’t there for the views. We need water and the kiosk is open. Not only is it open, it’s doing a brisk trade. Inside the protective wooden arms every chair is occupied by Portugal’s version of the cast of Last of the Summer Wine – the deep etches on their faces betraying a life lived and worked al fresco. They barely glance at me as I “com licença” my way past; too busy listening to gravelly, smoke-ravaged voices sharing local gossip. Every one of them nurses a plastic beaker filled with a murky substance which looks as though it could have been scooped straight from the riverbed. At the counter the female owner, cast from the same mould as her customers, fills more beakers with the same ruddy brown liquid, poured from a 6 litre plastic water bottle. I’m curious, but not that curious. We still have some kilometres of walking to notch up. Next time I’ll try it… or at very least ask what it is.