There are destinations which have occupied special podiums in my mind for many years. The trouble is, whenever you place something on a pedestal there’s always a danger of it toppling off and smashing to smithereens on the hard surface of reality.

It happened with Marrakesh and to a lesser extent Dubrovnik. One fascinated yet I found it difficult to like; the other immaculately beautiful but with a soul which had been partly erased by the soles of too many cruise passengers.

Venice is one of those destinations which sat loftily on a grand cerebral column. But reports of it being an overcrowded tourist destination (regularly lumped in with Barcelona and Dubrovnik) had made us wary that it might be just another dreamy bubble waiting to be burst. 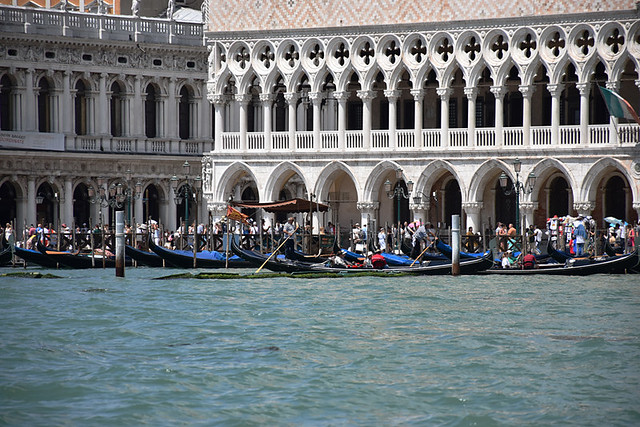 Ponte della Paglia was a bustling human ant hill of activity. On the choppy canal below, sleek ebony gondolas queued up to ferry their passengers under the Bridge of Sighs. The promenade in front of the Doge’s Palace leading to Piazza San Marco ebbed and flowed with a rippling sea of people. It was every bit as busy as I’d expected. But, as the vaporetto (water bus) deposited me in the midst of the madness, my first impression was that for all the photos I’d seen of Venice I wasn’t at all prepared for somewhere, as Shelley so eloquently put it, “temples and palaces did seem like fabrics of enchantment piled to heaven.” 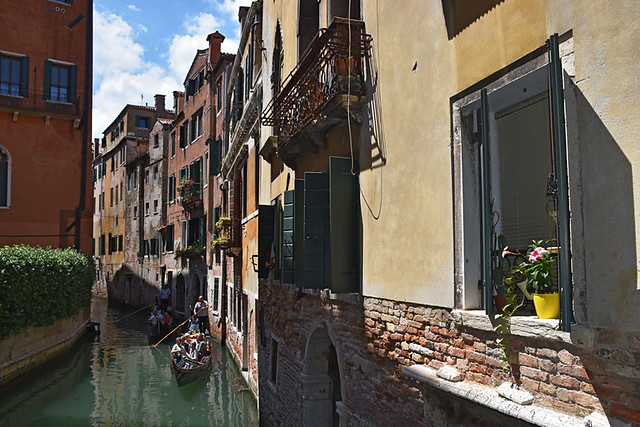 It isn’t the volume of people in some of Venice’s slender old streets which is the problem, all cities are by their nature busy places, it’s the marauding gangs of excursionists. There’s a self-regulated flow when people move as individuals or in pairs. But big groups clog up main arteries, getting in the way as they blindly follow the person with the umbrella or raised flag. It quickly became apparent the excursionists all followed the same over-trodden path between wherever they alighted and the main Venice attractions. Sometimes it was necessary to briefly do battle with the herds, but in a city where every unassuming lane leads to postcard scenes it was easy to escape the masses to enjoy streets which, if anything, were quieter than the average city. 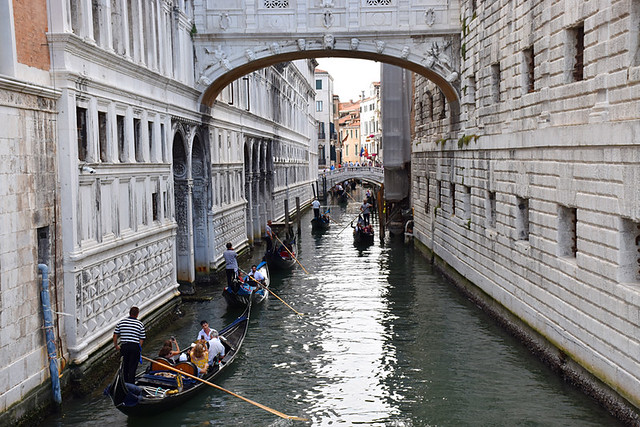 … places attract the hordes. Because they are worth seeing. Piazza San Marco is as beautiful a square as I’ve seen anywhere. After dark, when cruise passengers are safely back on board their floating metal cities, it is especially magical. I might prefer to spend most of my time away from the frantic throng jostling for selfies on a tick-list of historic bridges, but I’d bitterly regret not taking a peek at what all the fuss is about. So, like everyone else, I happily elbowed my way into pole position on Ponte della Paglia to take the classic shot of gondolas gliding under the Ponte dei Sospiri. 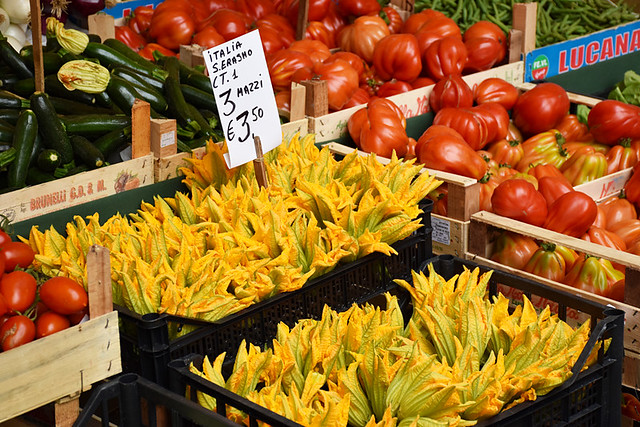 Rialto Bridge might be one of Venice’s architectural landmarks and another huge tourist magnet, deservedly so as it’s a gorgeous piece of work, but its ‘bookends’ were both interesting and illuminating. On the San Polo side is the Rialto Market which has been providing Venetians with fresh produce since the 11th century. Where the bridge was in danger of buckling under the weight of people, the market was relatively tranquil at around 10.30 on a Thursday morning. Crates of sunny courgette flowers gave me a yen for a plate of deep-fried ones, whilst neat rows of butterflied sardines looked ready to pop in the pan and then the mouth without fear of annoying needle-like bones getting stuck in the gums. 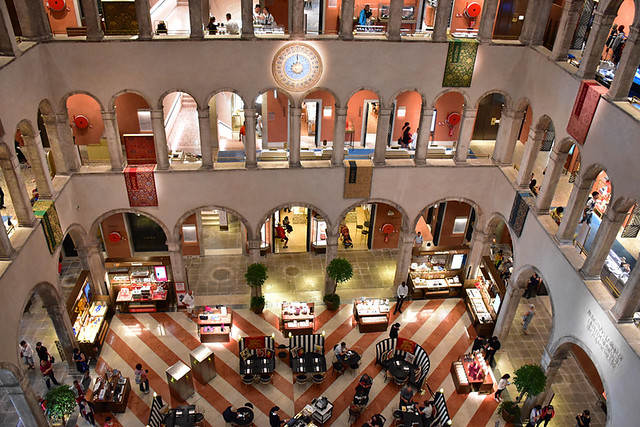 On the other side of the bridge lay a more sophisticated shopping experience – T Fondaco dei Tedeschi, a palatial shopping centre inside what was originally a 13th century trading centre. You’d expect it to be busy but, like the market, it wasn’t. It’s now a shrine to designer labels and, whether fashionista or not, it’s worth popping inside for a gander (there’s also a rooftop terrace). Both modest market and luxury shopping centre provided clues to why some parts of Venice are mobbed but many interesting parts aren’t. It comes back to that old slow traveller’s nemesis, cruise ships and their passengers. Theirs is a whistle-stop experience of Venice, subsequently anywhere that requires time to explore at leisure is likely to be off the agenda. Even in the Doge’s Palace we noticed excursionists were given an abridged tour. 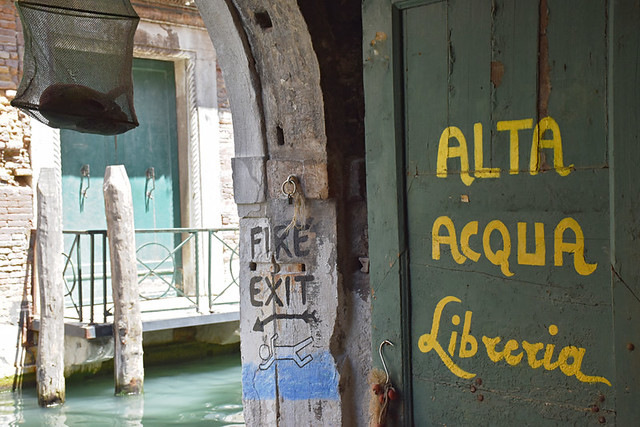 Having spotted a sparkling, silver rhinoceros from the water bus which brought us to Venice, we set off in search of the mythical creature on the banks of the Grand Canal. Almost as soon as we left San Marco to enter the Castello district the canal-side became devoid of crowds, with only a handful of people strolling the same route. We found our shining rhino and continued exploring inland after reading about a bookshop with a difference. Apart from an annoying quartet of instagrammers who hogged a mouldy, water-damaged book staircase, the few other customers at Libreria Alta Acqua were actually browsing books, some of which were safely piled up in roll top baths. This quirky bookshop is full of interesting tomes and whimsical touches; like the fire escape pictured. 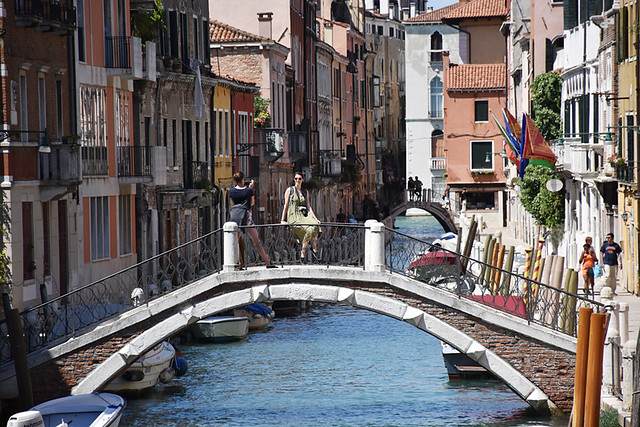 The multitudinous bridges across canals around San Marco, both grand and humble, buzzed with visitors vying for a spot to capture their Venice visit on their phones. On some there were even small queues of people waiting their turn. Had they walked in any direction away from the main drag for five minutes they’d have found a pretty bridge all to themselves; the city is a glorious maze full of them. My navigational skills were trashed by Venice, but it didn’t matter in the slightest as this is a city where getting lost really does lead to hidden treasures. 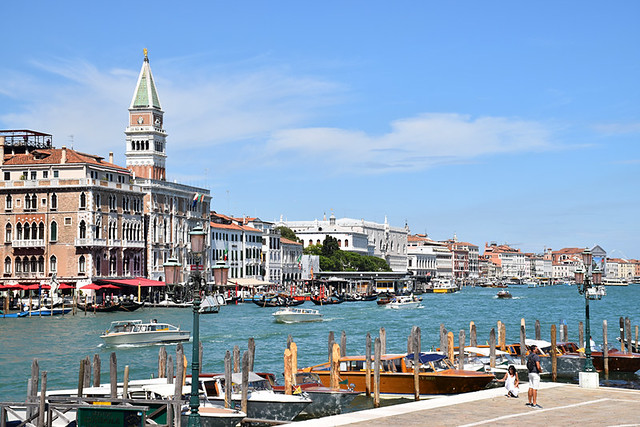 The more we strolled, the more we saw much of Venice wasn’t very busy at all, yet nowhere in the five districts of Venice we wandered through was anything less than architectural eye-candy. This is a city where grandiose historic buildings are as common as the pigeons on Piazza San Marco. Anyone who stands on the San Marco side of the Grand Canal can’t miss the twin domes of the Basilica di Santa Maria della Salute across the water. But there weren’t many who crossed the Accademia Bridge into Dorsoduro where the Basilica is located. We sat on its steps enjoying watching life on the canal with the Doge’s Palace as a classy backdrop from a tranquil, crowd-free setting.

The monster of Venice 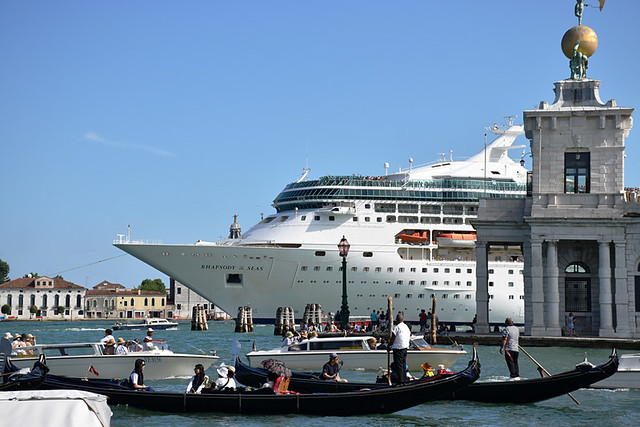 I’d seen photographs of cruise ships on the canals, none prepared me for the reality of just how incongruous they are. Like a behemoth rising from the depths, one suddenly appeared above the historic rooftops, making the buildings look as though they were models. Everyone stopped in their tracks to stare as it passed, thankfully at a snail’s pace. It is a shocking, sobering vision; however, it is spectacularly eye-catching and I’m glad to have witnessed it.

Ending in another Piazza 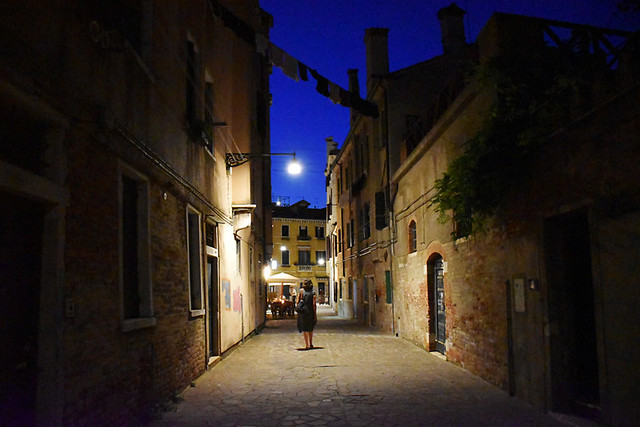 Our first night in Venice had involved being spellbound by its most famous piazza, our last night was spent in a square in Dorsoduro which was a complete contrast. Long, wide and lined with bars and restaurants, Campo Santa Margherita is located close to the university; subsequently it is students who give it its personality rather than visitors. Narrow alleys lead to it from all directions – on the south side one leads to a bridge known for bare-knuckle fighting – giving it an air of almost being hidden away. We could hear the buzz coming from the piazza before we found which spoke of the maze actually led to it. It was a square which reinforced the notion that, for all its popularity as a travel destination, Venice firmly retains the strength of character which has seen it flourish for centuries.

The greatest surprise about Venice? That it was more beautiful than I could ever have imagined. Romantic and visually stunning – an aristocrat which was also refreshingly down to earth – it not only met expectations, it towered high above them.

A Taste of Urban Grit – Glasgow in Photos

Mad, bad and dangerous to know. That’s what I thought about Glasgow growing up ‘doon the water’ in Rothesay. It always felt as though there was an undercurrent of violence simmering just beneath the surface… […]