Deciding where to eat in a city I’m visiting for the first time overwhelms a bit, there’s just too much choice.

Normally we’re only in a city for a few days at best, which doesn’t help, but with Lisbon we had seven nights in which to explore the culinary scene. Thanks to local advice, guidebook recommendations and spontaneity, we covered an interesting mix of cafés and restaurants, eating at some crackers and a couple of duds along the way.

These are the delicious delicacies, the so-so, the surprising and the never-again places of the Lisbon restaurant scene where we unrolled our napkins. 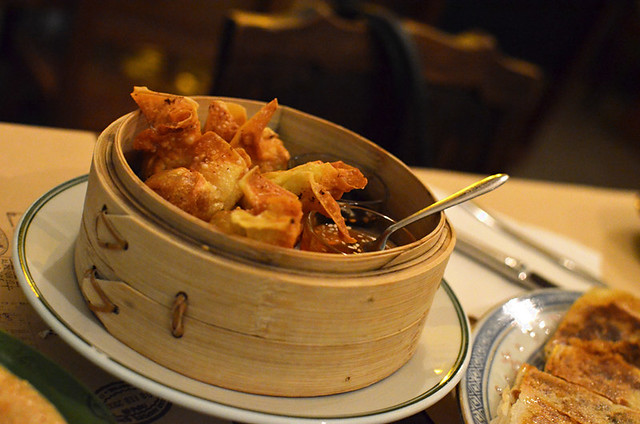 Day One: A Cracker of a Local Tip
Dinner: As we didn’t arrive at our apartment in Barrio Alto until near 7pm, some restaurant advice from owner André was seriously appreciated. Our apartment was on one of the most photographed funicular tram routes in Lisbon and Estrela da Bica (Travesia do Cabral 33) was a short distance further down the steep street. It was the perfect introduction to eating out in Lisbon – a small, atmospheric Portuguese version of a tapas bar serving an eclectic mix of tapas from around the world. At 8pm it was empty, half an hour later people were queueing for tables. Crispy squid tempura, roasted garlic hummus, olives and a game sausage bric had us happily toasting our arrival in Lisbon with a couple of glasses of Portuguese red.
Verdict: Highly recommended. 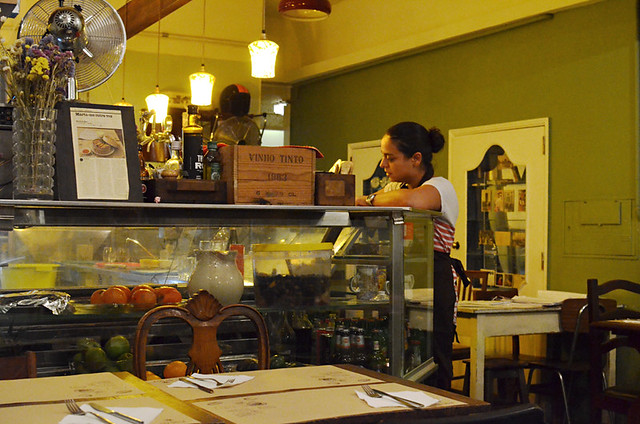 Day 2: Disappointment and Delight
Breakfast: We dived straight into the pasteis de nata experience at guidebook fave and Lisbon landmark Café Nicola (Praça Dom Pedro IV). Great for people watching and very good pasteis, but seriously overpriced at over €9 for two coffees and two pastels.
Verdict: Not worth it.
Lunch: Cervejeria de Trindade (Rua Noca da Trindade 20) is an impressive former monastery, with painted tiled walls and arched ceiling, that’s been around in one format or another since 1294. The restaurant part was quite pricey so we chose to eat  a selection of petiscos (Portuguese version of tapas) in the bar. Asking what the petiscos under a glass dome at the bar, the reply was ‘fish, fish, fish, meat’ – not really the most helpful of answers. The tapas were cheap and decent and the beer good, as you might expect from Portugal’s oldest brewery. But service was a bit surly.
Verdict: Only so-so.
Dinner: We’d stumbled across the gastronomic palace that is Mercado da Ribeira (Cais do Sodré) on a post-lunch explore and instantly decided that was where we were eating that night.
Verdict: It’s a must – so good, it got a post all to itself. Here’s the link to our review of Mercado da Ribeira. 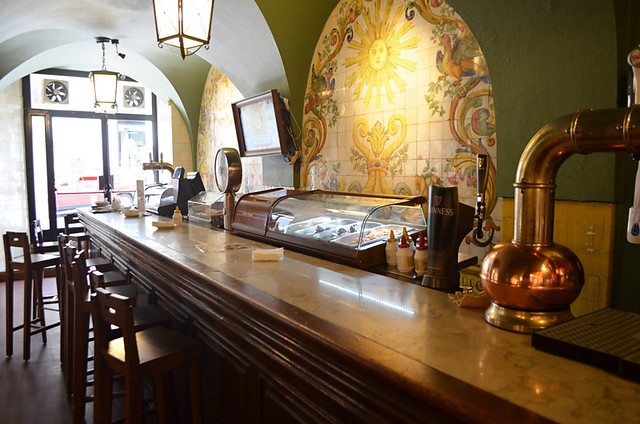 Day 3: Pasteis de Belém and a Tripadvisor Favourite
Breakfast: A venture out to see the sights at Belém started with a coffee and a cake at Pastelaria Adamastor just down the road (on the opposite side) from the famous Casa Pasteis de Belém. Being a hundred yards or so away from the main attractions meant that it was quiet, cheap, friendly and the cakes were great.
Verdict: Good local place for avoiding the crowds. 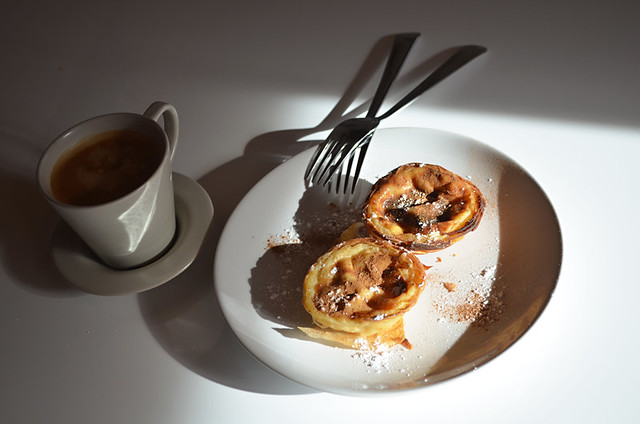 Lunch: A spontaneous choice at Honorato Hamburgueres Artesanais (next to Casa Pasteis, but there are branches all over Lisbon). The burgers with French fries were good and not bad value, averaging around €7,  but it’s a bit of a strange set up. For a fast food place, they took forever to be prepared (it was very busy) and there weren’t enough seats for everyone.
Verdict: Maybe Belém isn’t the best place to try Honorato.
Dinner: Back to Barrio Alto and a bit of an institution, restaurant 1 de Maio (Rua da Atalaia 8)  which was recommended by André as well as a group of Canadians who told us it had good reviews on Tripadvisor. It’s fun, friendly and small – we shared a table with the Canadians who had vouched for it. The menu is traditional Portuguese cuisine and quite basic – I had veal with chips and a spinach purée. It was nicely cooked but lacked finesse and was a bit pricier than other places we’d eaten, probably because of its reputation.
Verdict: Good if you want to try basic Portuguese cuisine, but we’re used to this sort of simple traditional cuisine where we live and so the food didn’t really ring our bell. We enjoyed the experience though. 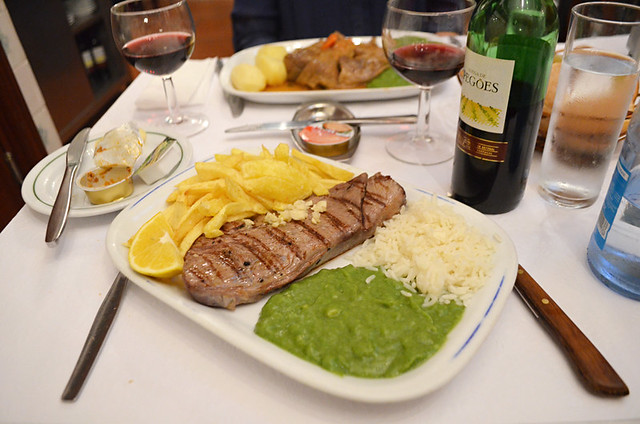 Day 4: Trip to Sintra and a Repeat
Breakfast: Coffee and a couple of Pasteis de Belém on the terrace of our attic apartment – perfect for an ‘easy like Sunday morning’ wake up. The pasteis were good as always, but we couldn’t really tell the difference between the famous ones and the bog standard ones bought in the average pastelaria.
Lunch: We figured a trip to popular Sintra would bring with it tourist prices, but we were pleasantly surprised that generally speaking prices didn’t seem any different than other places and certainly not at Piriquita (Rua Paradias 1/7), a nice, no frills café/bakery where you take a ticket, point out what pastries you fancy and grab a seat. Piriquita is famous for its sweet queijadas and travesseiros. We didn’t know this, which is why we ended up with the Portuguese version of pork pies and sausage rolls.
Verdict: Buzzing little place and great value, we liked it a lot.
Dinner: A return to the Mercado da Ribeira to try different stalls. 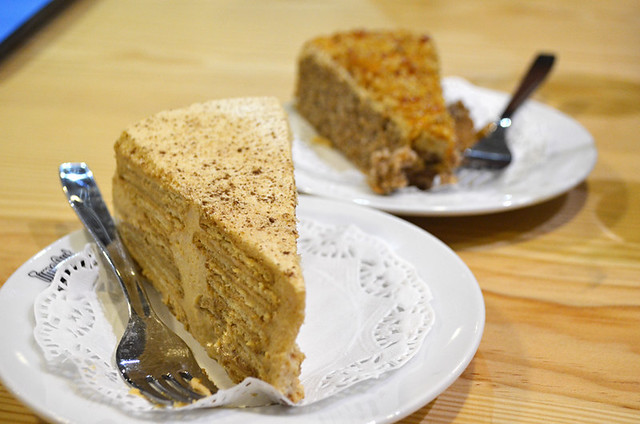 Day 5: Change of Scene and a Top Restaurant
Breakfast: For the second half of our visit to Lisbon we decamped to the Hotel Inspira Santa Marta to experience a different side of the city. As we breakfasted at the hotel, it was only lunch and dinner from here on in, but we did stop at one of the little pastelerias on Rua do Loreto en route to the hotel. These were a much better experience than Cafe Nicola on day 1.
Verdict: These places are bustling with local life and cheap.
Lunch: Feeling tired and hungry amidst the ‘hard to tell apart’ restaurants in the streets around Rua Augusta, we picked one almost at random and had lasagne and prego (a steak sandwich advertised everywhere). Both were run of the mill fare but good value.
Verdict: I didn’t bother taking a note of the name, a lot of these restaurants are interchangeable. I wish I’d eaten more pregos though.
Dinner: The gastronomic peak of our visit was dinner at Tasca da Esquina (Rua Domingos Sequeira 41C) again so good it gets a review all to itself.
Verdict: A must visit for any self respecting foodie. 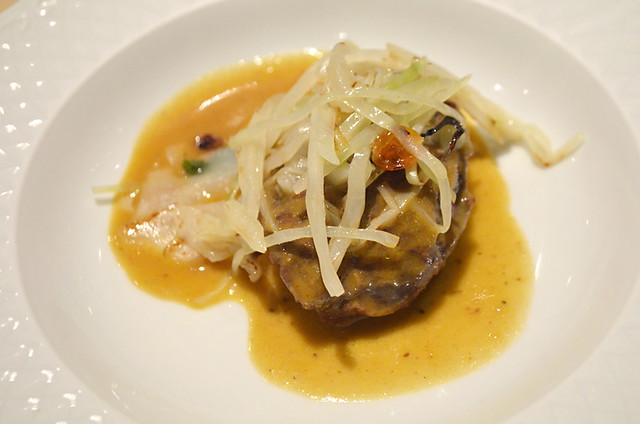 Day 6: Lunch and Dinner in the Praça
Lunch: A special affair at Aura Restaurant on the historic and grand Praça do Comercio. It wasn’t the best of days so we ate indoors in the elegant and opulent interior. Another interesting Lisbon restaurant that deserves a separate review (coming soon).
Verdict: Ideal for a special meal in a special location.
Dinner: We ended up back at the Praça do Comercio mainly because I wanted some after dark photos of this part of Lisbon. It had been a hearty lunch so petiscos were the order of the day or, in this case, night. It was a toss up as there are a few stylish cafe/restaurants. Ministerium Cantina won because it had funky seats. Prices in the  Praça are a bit more expensive than inland, €5 for four cod balls with yoghurt and onion and the same for four steak croquettes in a mustard sauce. But it is a rather special setting and we enjoyed lingering over the petiscos with a bottle of red watching locals launch Chinese lanterns from the square.
Verdict: Friendly staff, decent tapas and a good people watching spot. 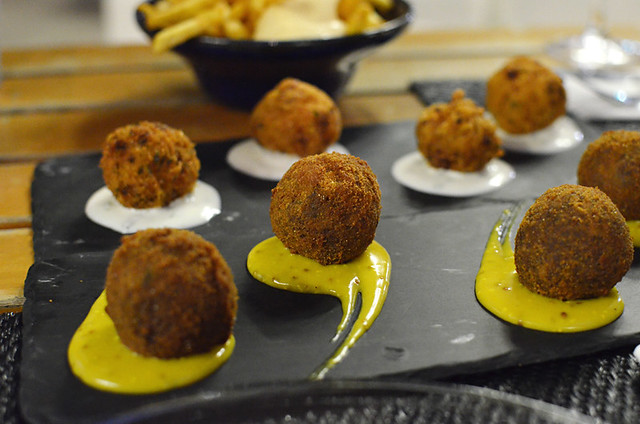 Day 7: A Special Experience
Lunch: Another case of choosing one of those ten-a-penny restaurants around Rua Augusta after spending more time than planned exploring the Castelo Sao Jorge. This time it was fillet of fish sandwiches with glasses of vinha verde.
Dinner: This couldn’t have been a more fitting last night in Lisbon treat, Maria de Mouraria; an authentic fado house off the beaten track.
Verdict: A memorably haunting and emotional must. See the full review for more information. 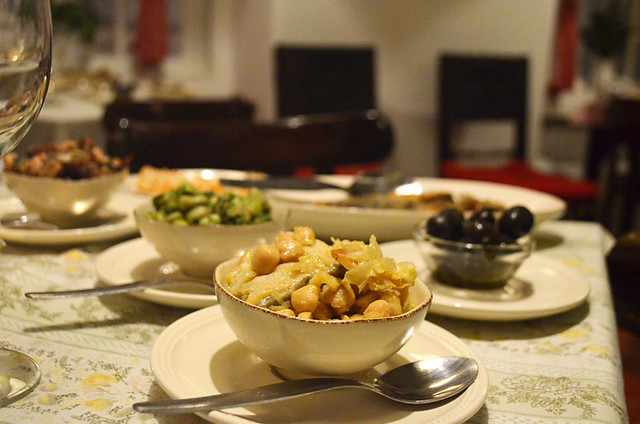 Day 8: Pizza with a difference
That left a last lunch and an opportunity to try Luzzo Pizzeria (Rua de Santa Marta 37) opposite our hotel. We were intrigued by Luzzo as we’d read that you do all your ordering by tablet. The place was full of office workers and students. Buzzing, with incredibly friendly staff who talked us through the tablet ordering process (probably would have been easier for them to take our order the old fashioned way) and an imaginative selection of pizzas. Using the tablet we ordered a champagne prawn pizza (€10.80), split between two, a couple of glasses of red wine and waited to see what happened. A few minutes later, the wine appeared (generous measures) followed by the pizza, split between two plates. Easy peasy.
When it was time to go, we hit the tablet again and the bill was waiting at the checkout beside the door.
Verdict: Great fun, very friendly and good pizzas.

We loved it and left Lisbon with smiles on our faces. 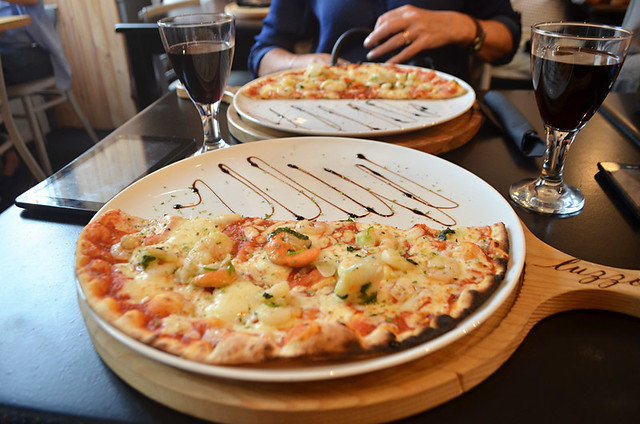