In a world where it can sometimes seem too many people equate bigger and newer with better, we still get a thrill out of the small things when it comes to travel; an unusual amuse-bouche, an imaginative sign, an enchanted tree, an ancient crooked cottage… whatever, surprises can take infinite forms.

There are small sparkling trinkets everywhere, easily overlooked by anyone blinded by a quest that involves constantly searching for the next big hit.

These particular seven mini wonders of the world are located in the Canary Islands.

Tunnels of Life on La Palma 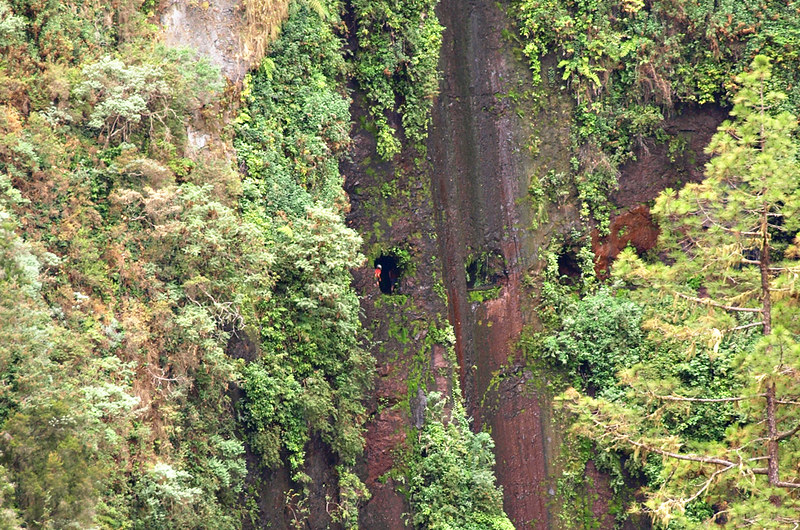 Thirteen tunnels hacked through the rock to channel water from the Marcos y Cordero springs on La Palma double as a wet ‘n’ wild walking route (hard hats and waterproofs required) on La Isla Bonita, La Palma. It’s a trek to get to them in the first place which keeps them exclusive to those who are willing to invest the effort in experiencing a wonder created by man and nature. 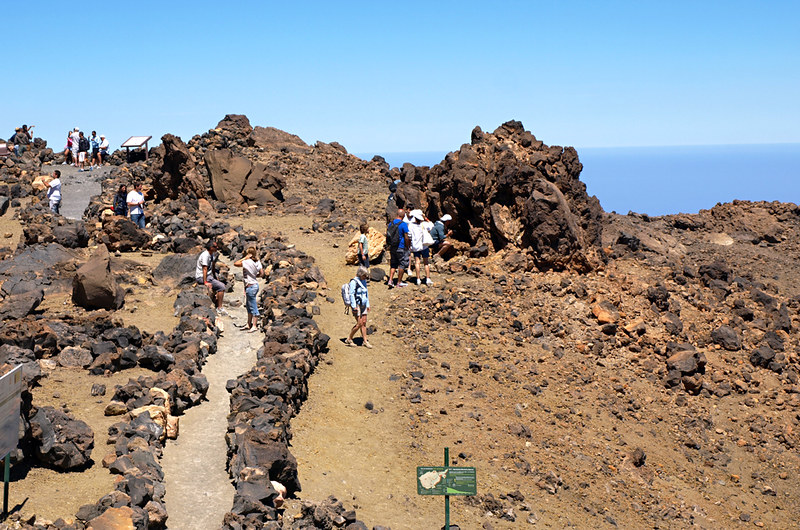 Millions of people walk these paths each year, most of whom miss an anonymous little rock near the summit of  Mount Teide and close to the path linking the upper cable car station with a viewpoint overlooking La Fortaleza. Stick your hand in the hot hole in the rock for a surprising instant hand sauna; it’s like the sweat explodes from the pores. 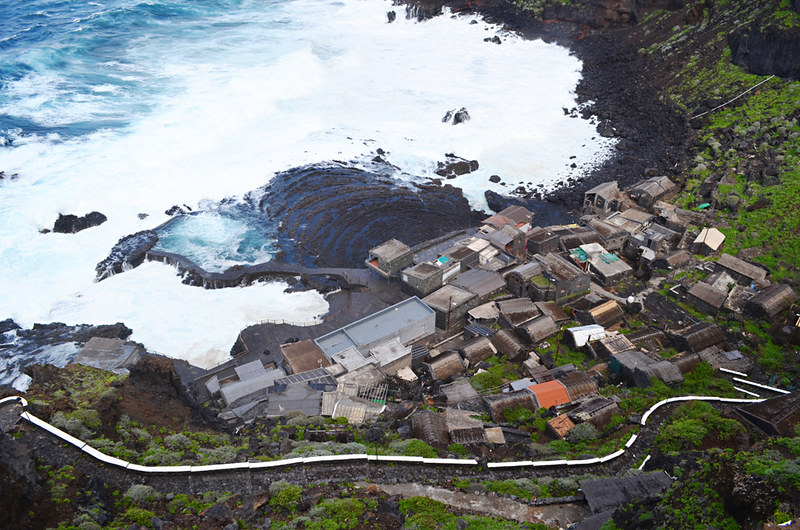 With what looks like a mix of military style pillboxes and volcanic stone cottages with thatched huts, Pozo de las Calcosas is a curiosity of a town that has existed since the 17th century. There doesn’t seem to be a lot of information recorded about its past raison d’être apart from the fact that there’s a lot of sorrel about. Now it’s a summer hangout with a rather snazzy sea pool. In summer it’s a lot more inviting than in this photo. 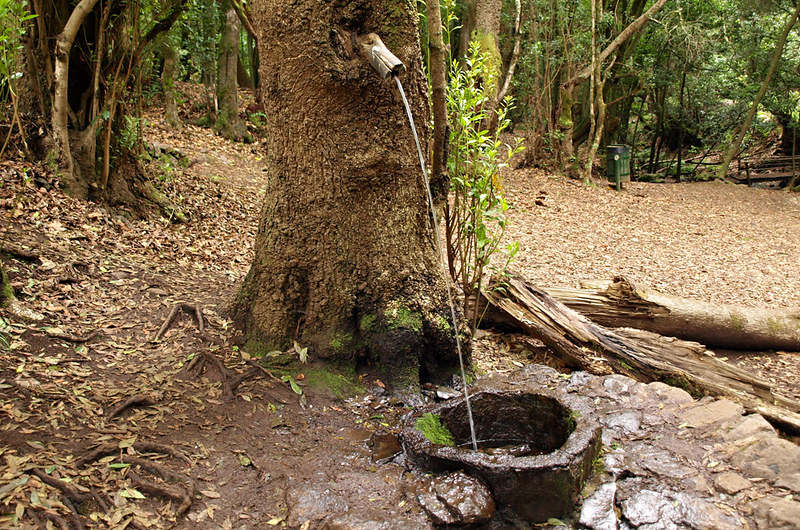 In the misty depths of the Garajonay rainforest, beside a small church in an area known as Las Mimbreras, stands a tree that could have grown from the pages of a fairy tale.  A spout of water pours from a hollow branch and into a stone bucket at the tree’s base. We’ve been transfixed by the tree in the rainforest many times but, like one of Dynamo’s magic tricks, we’ve no idea how it works. In a way, we don’t want to know in case it erases some of the magic. 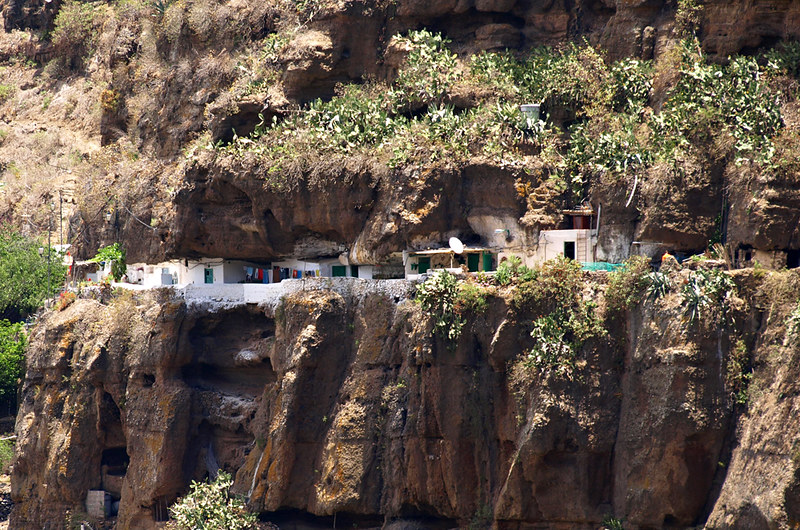 People have lived in caves in the Canary Islands since the first humans set foot on the islands. It made sense, caves are instant housing – cool in summer, warm (relatively so) and dry in winter. That troglodytes still exist on some of the islands in the 21st century is quite astounding. These ones are at Los Lugarejos in the north of the island.

Town with no Roads on Lanzarote 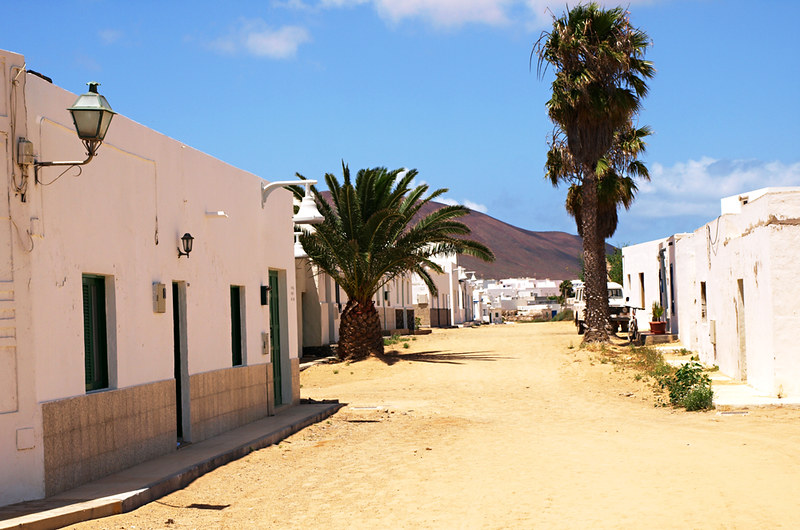 The small island of La Graciosa lying off the north coast of Lanzarote is a sandy quirk in itself but it’s the town of Caleta de Sebo which ramps up the curio factor. Lying next to an island known for mass tourism, the sight of a town with sandy streets devoid of tarmac which looks like it belongs in the desert is a sign that the Canary Islands have far more depth than the ‘existing only for sun-seeking tourists’ image. Africa feels close here.

Cave of the Dead on Fuerteventura 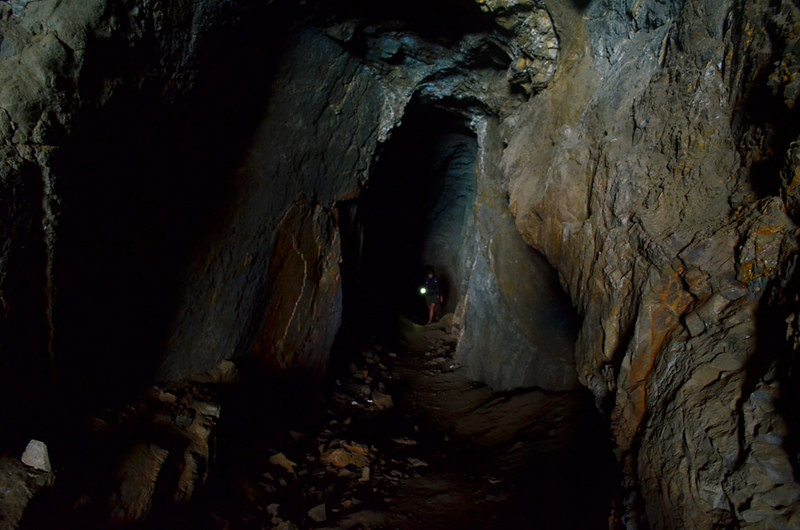 Ajuy is a magnet for coach excursions and the coastal route to the caves can be quite busy, hardly off the beaten track stuff. And yet eagle-eyed visitors might spot a barely discernible opening to a sister cave to the main cathedral-sized chamber. Known as the Cave of the Dead, the second cave is overlooked by most visitors, possibly because it’s a bit of a scrabble to enter. Or maybe it’s ignored because it’s a bit spooky and ghostly sightings are not uncommon there. Enter if you dare.

Apart from all being located in the Canary Islands one other thing that all the above have in common is that we saw nearly all of them whilst exploring the islands on foot. There are always rewards with slow travel.