Ask someone to define Slow Travel and you’ll either get a blank stare or a thousand and one different opinions. Often the phrase ‘state of mind’ is used in connection with the term Slow Travel. I believe it’s a fair interpretation as it is something which is difficult to define – it means different things to different people. But you know it when you experience it… or see it.

To cast a net around the definition of Slow Travel and reel it into the one sentence; it’s about interacting with the authentic face of the destination you happen to be visiting. 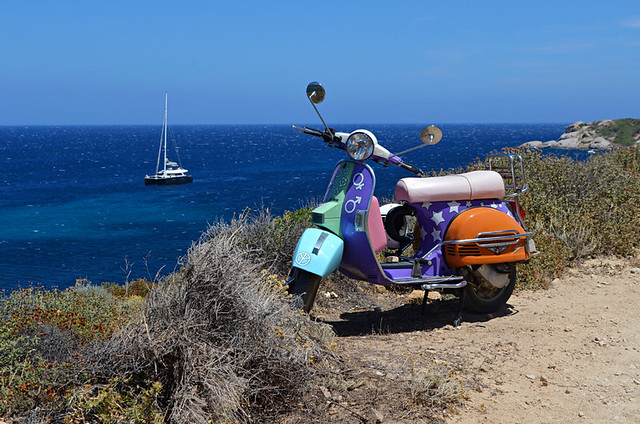 Recently I was tasked with judging a Slow Travel photography competition. It’s not a role I feel comfortable with as I’m not a ‘technical details’ type of photographer. For me photos either work or they don’t. There’s far more to a photo than knowing the mechanics of how a camera operates, or even a series of rules. It’s a photographer’s eye which impresses me more. I marvel at photos which are completely blurred but which convey their message/feeling with crystal clarity. That is what I aspire to – being able to capture the soul of a scene.

We specialise in writing about Slow Travel. An aspect of that involves helping design and create Slow Travel holidays with UK specialists Inntravel. Part of that remit involves pulling together a portfolio of photographs for specific destinations. It’s a constant challenge to look at any new location and consider how to ‘capture’ it in a series of images. Especially as classing something as a Slow Travel photograph is a seriously subjective business. 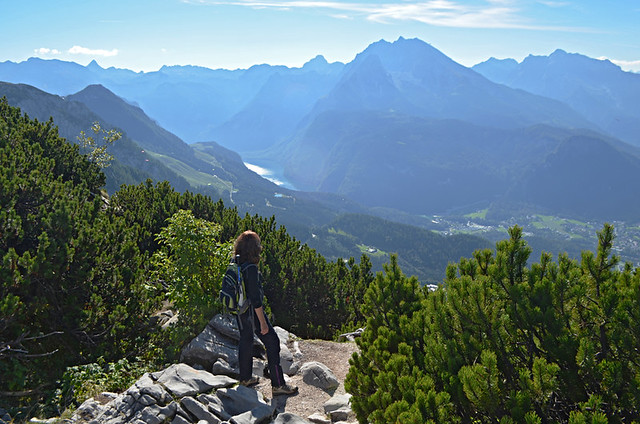 What makes an image of scenery a slow travel scene? Surely all rural scenes suggest an element of Slow Travel? Not to a cynic like me. Who’s to say a coach load of ‘ticking-off-the-boxes’ excursionists haven’t pulled into a viewpoint, snapped a few shots and headed off to their next ‘attraction’? There are signs in a shot which should at least imply slow travel. Misty morning shots suggest someone rising early and possibly the sense of setting off on a journey. Having someone in the scene who has a rucksack, walking boots/poles etc. shows they’ve made an effort to get to a spot on foot. These sort of ingredients in a photo make me trust its authenticity as a Slow Travel scenery shot. 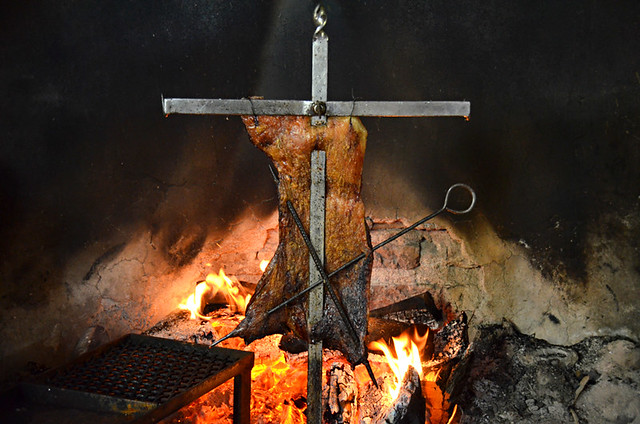 Food in a photo can illustrate Slow Travel in many ways – food markets; images of local dishes featuring unusual ingredients; people serving food; chefs preparing dishes, especially when you can see ‘local’ products; and images which instantly give you the nod something about the food in the shot is in another destination. In the case with this image, the way the lamb is being cooked tells you it’s more than likely a traditional method. The fact it’s being roasted on an open fire with a soot blackened background shows it’s somewhere with no frills. The clear message is this is no international fast food joint. 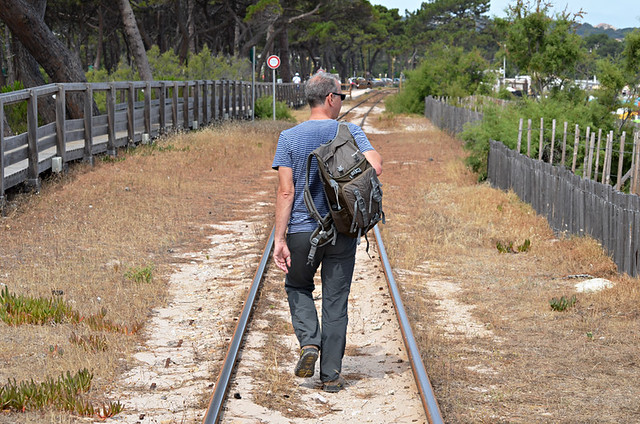 People are ideal for conveying a sense of Slow Travel. That doesn’t necessarily mean photos of people doing next to nothing, unless their surroundings add another element. Someone lying on a sun lounger on a tourist beach doesn’t say ‘slow travel’. Whereas someone lying in a hammock in a sun-dappled orchard does. Context is everything. It’s the same with animals. A photo of a cute animal simply doesn’t have anything to do with the concept of Slow Travel for me unless there is also context. This is a manufactured Slow Travel shot. I saw a railway line (slow railway) and thought it would be quite neat to pretend to walk along it, like a character in a C&W song. 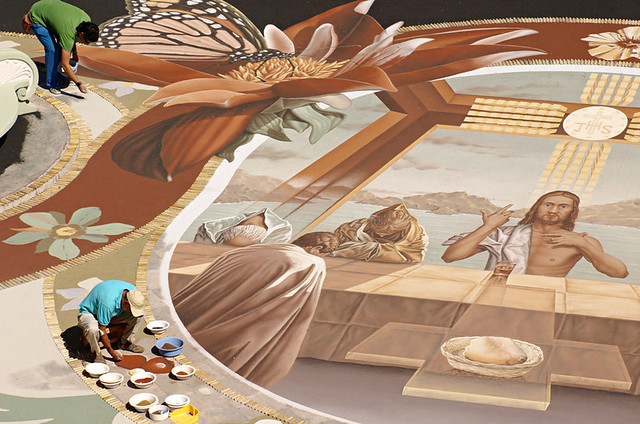 Local fairs, fiesta etc. are places which are guaranteed to throw up any number of Slow Travel photo opportunities. You can’t go wrong really. As Slow Travel is all about interacting with a destination, being at a local cultural/traditional event means you’re automatically interacting. Cultural shows in a hotel lounge don’t count. In this image, to celebrate Corpus Christi alfombristas (carpetmakers) in La Orotava, Tenerife, create a masterpiece of a tapestry with sand and soil taken from Teide National Park. 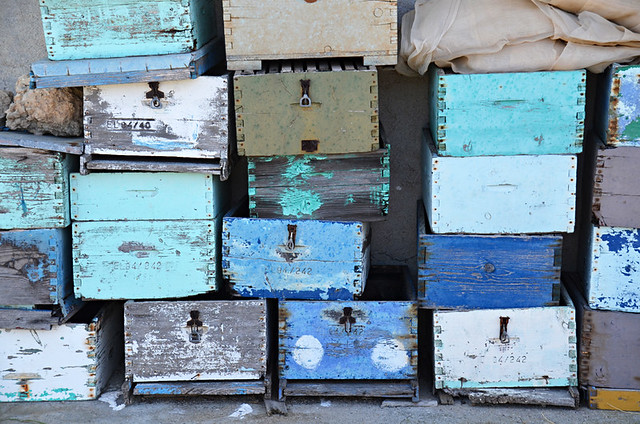 Little things mean a lot when it comes to Slow Travel photography. Going for close ups of something – a poster, signpost, specific object – can get across all sorts of information about a destination. Sometimes from the image that information is obvious. At other times, and even better, it requires the person looking at the photograph to fill in the gaps with their imagination. This is simply a mish mash of boxes of varying shades of mainly sun-bleached blues. True. But what are the boxes for? They’re portable beehives. 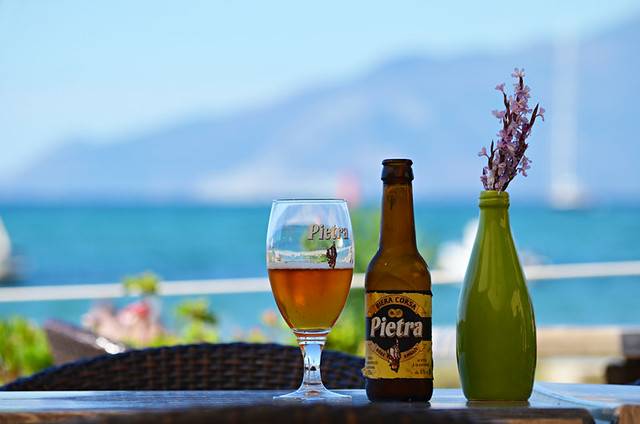 As with food, there are all sorts of ways to use drinks to get across Slow Travel, a feeling of kicking back and enjoying the surroundings, especially when combined with a backdrop which adds the back story or even just provides a hint to the destination. For example, in this image the bottle itself shows it’s Corsican beer whilst a deliberately blurred background is designed to create an enticing notion of drinking it in refreshing shade beside the sea. The vase with the flower is meant to add a certain je ne sais quoi. 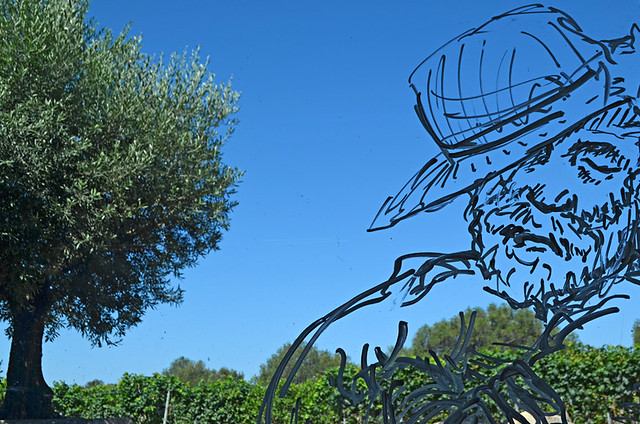 My favourite Slow Travel shots are the ones that are almost impossible to define, or to set up. Things you stumble across which are unique and which positively ooze that Slow Travel vibe. This drawing on the window of a vineyard building evoked warm ideas of spending the afternoon drinking wine in the sunshine and then snoozing the effects off in the cooling shade of an olive tree.

But maybe that’s just me. Like I said, it’s a subjective business. 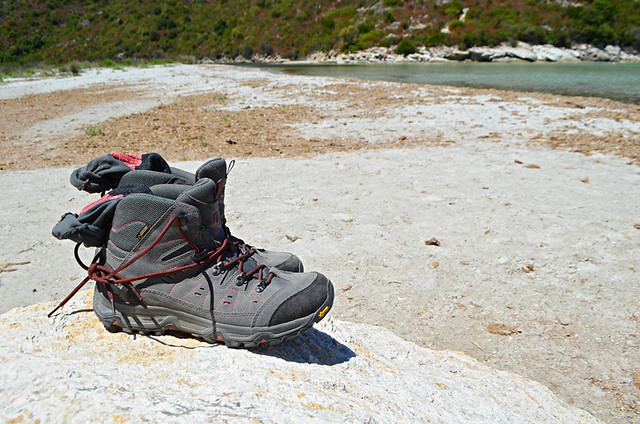 I’m off to take a photo of a shepherd gazing dreamily at a picturesque hilltop town. He has a cute lamb under his arm and a mandolin slung across one shoulder. He’s also sitting in the shade of a fruit-laden orange tree with a half drunk bottle of wine, wedge of rustic bread and a round of ripe cheese at his side.