There are many reasons we enjoy working with Slow Travel specialists Inntravel; one of them being we regularly find ourselves exploring areas of Europe which we knew little about previously, piecing together new Slow Travel holidays on their behalf. On this occasion it was Drôme Provençale, the northern gateway to Provence, an area which, bizarrely, has so far been mostly overlooked by British visitors to the south of France.

We’ve slow travelled in Provence before but Drôme Provençale, although exhibiting many of the classic Provence ingredients, had a slightly different personality; one which was typically soft and beautiful in that dreamy Provence way, yet with a slightly wilder, more carefree edge.

Here are ten scenes to give a taster of what I mean. 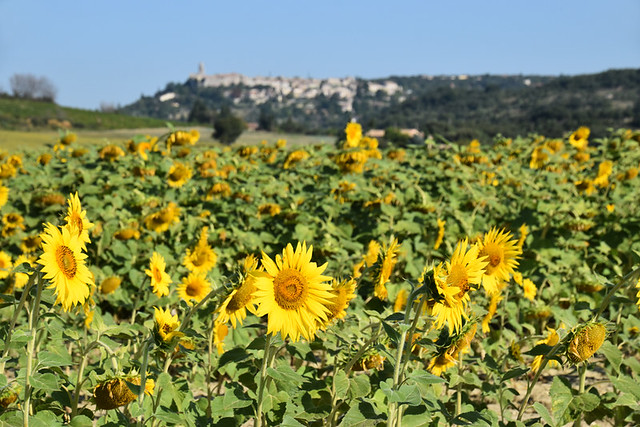 One day we shall fall to our knees in reverence when gazing over the wondrous sight of neat rows of lavender in full bloom flowing gracefully below honey-coloured villages-perchés. But so far our timing has been out. The evidence was there – the tidy lines of plants beside picturesque villages – the bloom had long gone. However, there were still pockets where fields of smiling sunflowers added a vibrant blast of colour to an already exquisite landscape. Classic Provence. 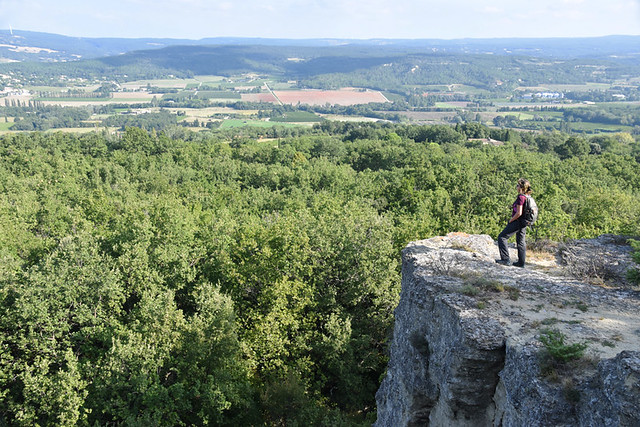 After our last foray into the Provence countryside I wrote ‘walking in Provence was like enjoying a light dessert after a hearty meal.’ Drôme Provençale has the gently undulating hills, neat fields, dappled paths and quaint farmhouses with Provence-blue wooden shutters and doors. But it also has clifftop paths above deep crevasses and dense woods where wild boar snuffle for truffles. Routes flow from pleasant Stella Artois advert farmlands to more rugged terrain where natural balconies give expansive views across the countryside. And the magical thing about it is, switching from one to the other doesn’t involve a great deal of effort. Paths generally climb gently so walkers get the sort of views which would normally require much huffing and puffing. 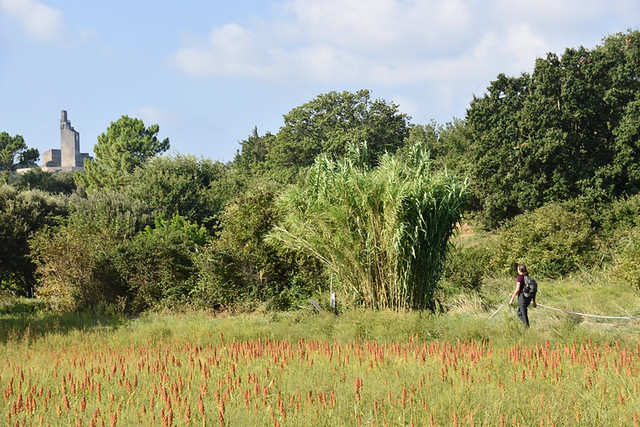 Where do I start? Good walking routes require a variety of ingredients as far as we’re concerned, including a richness of historic snippets. The area of Drôme Provençale we concentrated on had it by l’ancien bucket-load; from Romanesque churches to Medieval castles and neo-classical fountains and beauty spots where nymphs bathed to stones used for sacrificial stones (allegedly). One of my favourites was Chamaret’s feudal keep, a 33m high dungeon which can be seen pointing to the heavens from all over the surrounding countryside. 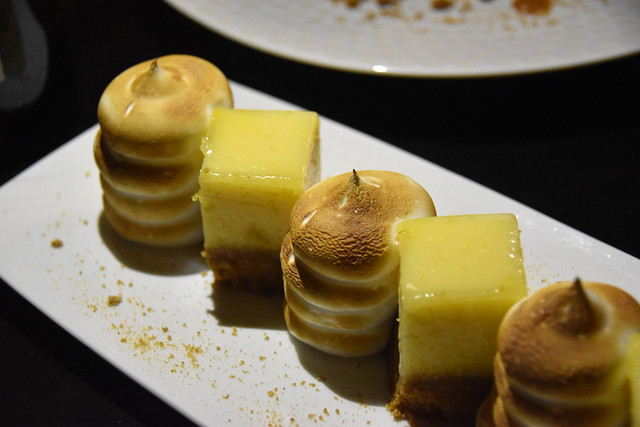 On our last trip to Provence there were some areas where I have to admit to being a tad disappointed with the culinary offerings in restaurants. In one place it seemed impossible to avoid lamb, nice though the local lamb was. Drôme Provençale was completely different. Restaurants were quietly sophisticated, even in relatively small towns. This was reflected in our rural accommodation where gazpacho was served with a goat’s cheese ice cream island. But there were also coarse Provençale pâtés and flavoursome creamy cheeses so, overall, a tasty balance between the traditional and contemporary. 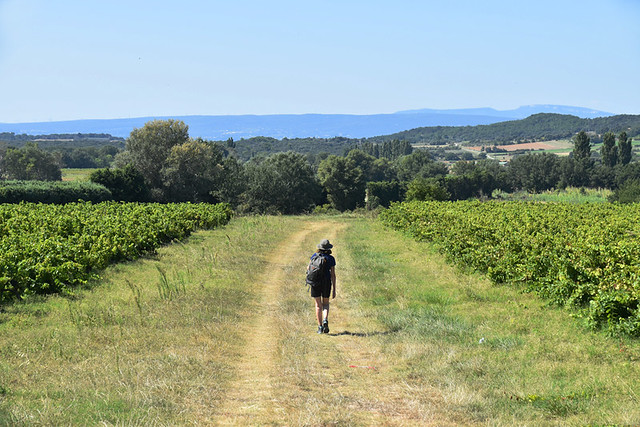 It’s Provence, you know you’re going to get the sort of scenery where instead of having litres of water and energy bars in your rucksack you really should be strolling through vineyards with a knapsack filled with rounds of cheese and a bottle of vin rouge. 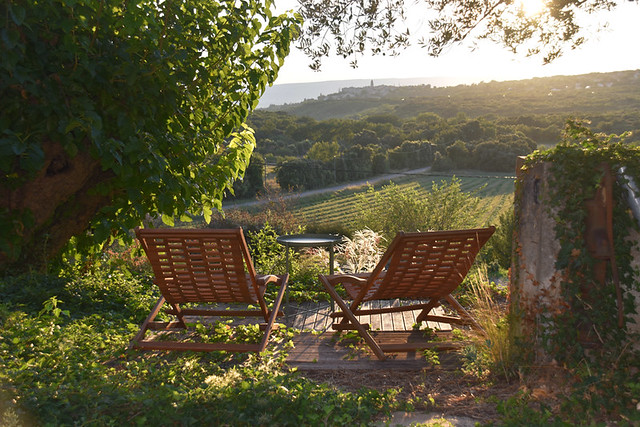 As dreamy as the Provençale countryside – mostly small, boutique, rural hotels run by people as charming as their exquisite abodes. Honestly, the sort of places you instantly covet. We enjoy a wonderful lifestyle but I looked at some of the small hotels we visited and couldn’t help but ponder what it might be like to live in such idyllic settings. Instead, we had to make do with temporarily enjoying sipping post-walk beers in the late afternoon sun outside our mini gite, and tucking into dinner al fresco as the sun set, lapping up views across a gentle valley to one of the area’s most picturesque villages-perchés. I’m deliberately not mentioning their names as the actual Slow Travel holiday which includes them hasn’t ‘gone live’ yet. 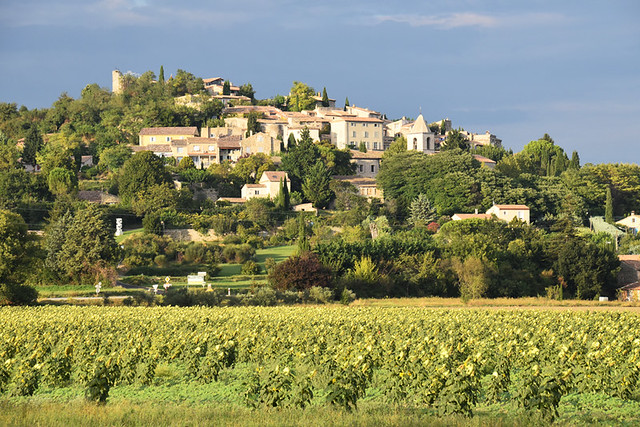 Talking of villages-perchés gives me an excuse to include an image of one. It doesn’t matter which, they’re all picture postcard material. 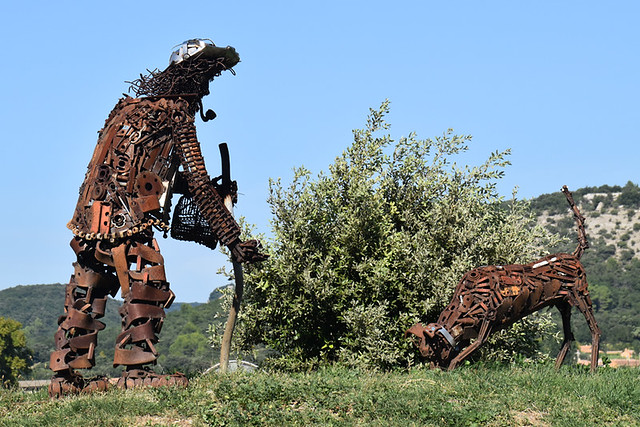 An integral aspect to getting to know individual areas is finding out what sets them apart from other places; what traditional activities are a bit different. This area was especially renowned for its truffles; the world’s top source for black truffles in fact. We didn’t see any truffle hunters or snuffling dogs, but we loved this rusty, arty homage to them on a roundabout. There’s lots of truffle trivia to be learned in the area, like eating black truffles was once considered to be akin to dabbling with the Devil. 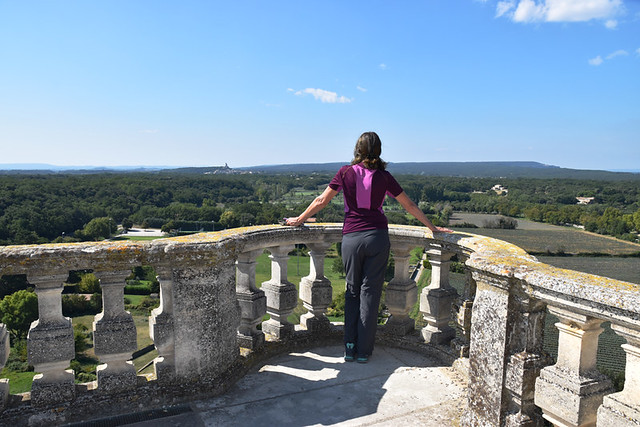 One of the aspects to the Drôme Provençale countryside which elevated it was that at key points we’d find ourselves on hilltops, either in small towns or on ridges, where we were able to trace where we’d come from and look forward to where we were going; you could say literally high points of the routes. 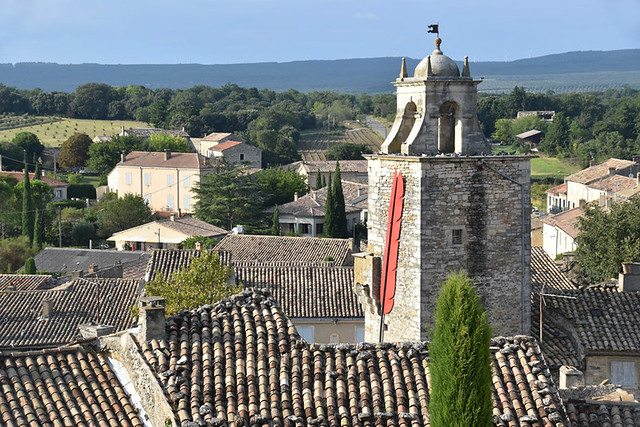 Finally quirks. We adore quirks, follies, oddities. They often add uniqueness to a place as well as prompt people to utter “bugger me, I didn’t know that”… or maybe that’s just me. Scarlet quills decorate buildings in the town of Grignan as it was sometime home to Marie Sévigné (shortened version of her name), a French aristocrat famed for her witty and colourful letters. Thanks to her evocative scribblings, each year in July the Festival de la Correspondance celebrates the art of letter writing attracting authors, actors and artists. Isabelle Adjani was at the 2018 festival (the one name I recognised on the programme, but that’s probably down to my ignorance of renowned French authors and artists).