Ask me two years ago what visions the word Alentejo formed in my mind and my immediate answer would have been vast golden plains; a landscape devoid of people save for a handful of settlements, often clustered around an old fort atop a lonely hill.

Alentejo is the least populated region in Portugal, its residents averaging the oldest of any in the country. It is an intriguing region in many ways, but after four months of staying in deepest Alentejo, right on the border with neighbouring Spain, it felt like a place which took an awful long time to get anywhere else from.

Jump forward and there now isn’t one vision, but many; all of them pushing and shoving each other out of the way to claim “I am Alentejo,” “No, I am Alentejo.”

These are ten scenes from the land beyond the Tagus to illustrate why. 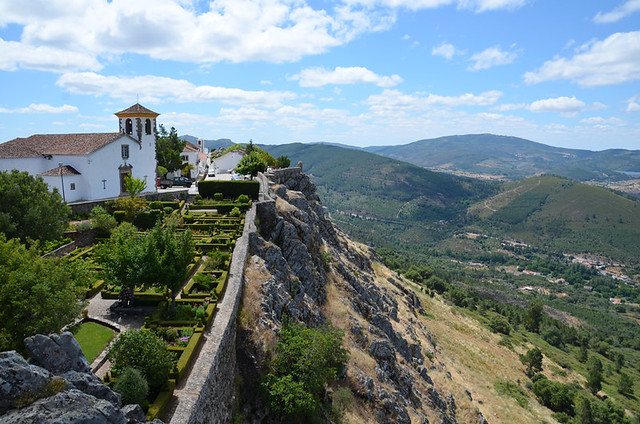 Marvao
The town which was our architectural eye candy for four months. We couldn’t step outside the house we were renting without being treated to views of Marvao, the lord of the Serra de São Mamede Natural Park. Once a Moorish stronghold, now simply a joy of a place to a) look at b) have a wander around. Two years ago we described it as being one of the most beautiful small towns we’d visited. It still is, but now it’s been joined by a handful of Alentejano mates. 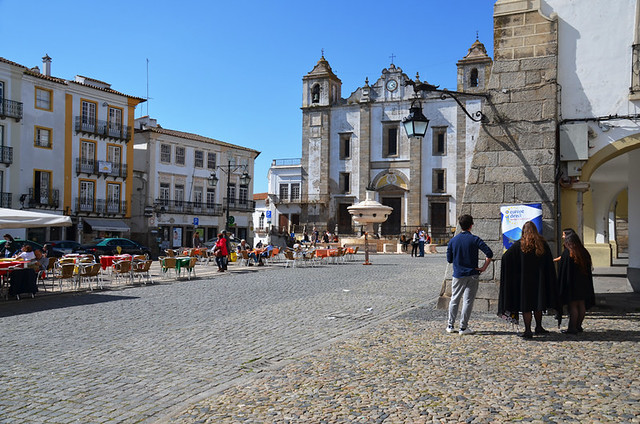 Évora
One of two towns in Alentejo which are UNESCO World Heritage Sites, Évora seemed like a cultural metropolis to us during our time in the wild plains. It was an hour and a half drive from the Portuguese border to Évora where we could catch a train to Lisbon, and the world beyond. The town is historically picturesque with some wonderful quirks – Capelo dos Ossos (Bone Chapel) – and it has a handful of excellent restaurants, some of which have menus which are tad more sophisticated than the generous, hearty and usually meaty traditional Alentejo gastronomy. 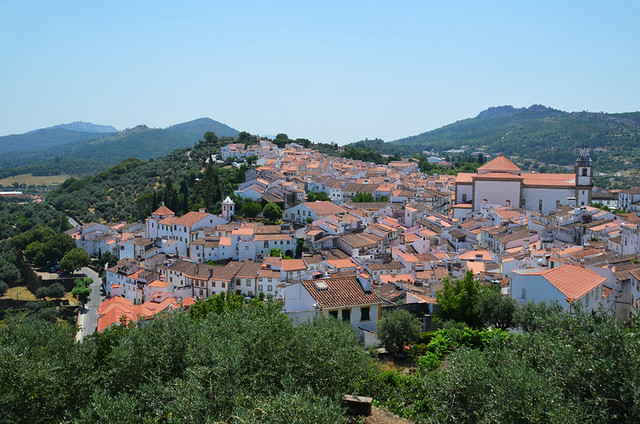 Castelo de Vide
Castelo de Vide is another pretty Portuguese hilltown with a relatively lively cultural scene. As well as having an attractive old centre with a maze of strollable streets, it’s home to what was our favourite restaurant within driving distance – A Confrario, mainly because they serve a sensational Portuguese gazpacho. It was also home to the nearest decent-sized supermarket and the source of free spring water gushing from lions’ mouths on a rather elegant fountain which is right next to the factory which bottles the same water, for sale in the area’s shops and supermarkets. 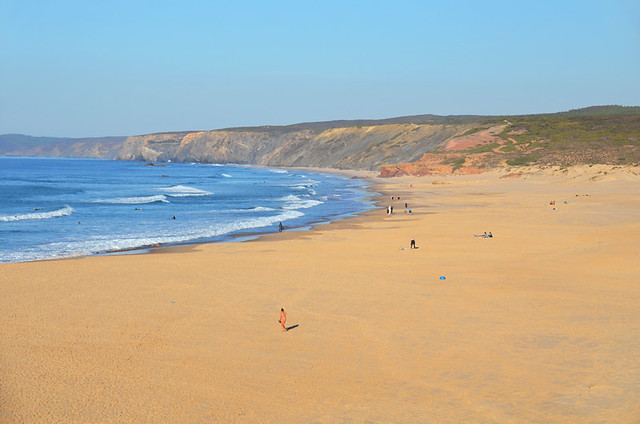 Costa Vicentina
South West Alentejo merges into the Algarve along the Costa Vicentina. But where the coast to the south is home to numerous resorts that have sprung up to meet the demands of sun-seeking tourists, the Costa Vicentina, like much of Alentejo, is wilder and lacks purpose-built tourist developments. Subsequently, the coastline has become highly popular with hikers, whilst its travel-magazine-cover-worthy beaches tend to feel more bohemian than those of the southern Algarve; being either virtually empty or populated by surfers and neo-hippies. 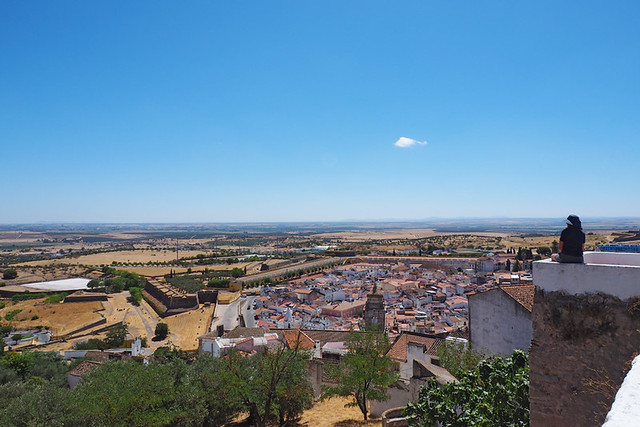 Elvas
The second Alentejo town which is also an historic UNESCO World Heritage Site, Elvas isn’t as well known as Évora, and it doesn’t feel quite as sophisticated. But it does have the capacity to surprise more; from the seven kilometre Amoreira Aqueduct which forces jaws open on arrival to the views from the largest star-shaped fort in the world across those golden plains to neighbour Badajoz. Elvas’ tiny British Cemetery is a poignant spot to contemplate what life must once have been like in this garrison border town. 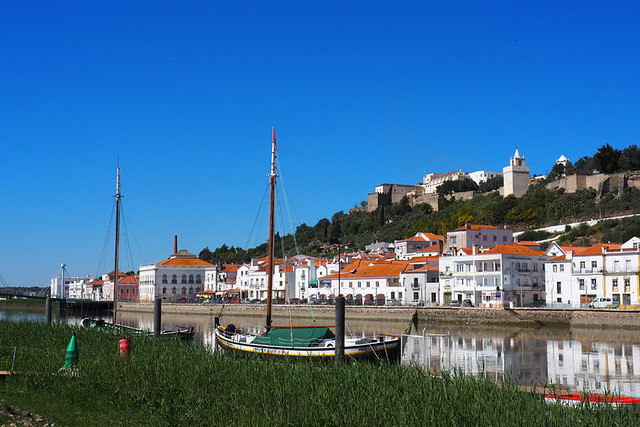 Alcácer do Sal
On the opposite side of the country, near the western coast, the scene and scenery is quite different. I don’t think of Alcácer do Sal as being Alentejo purely because it feels like such a contrast to the land we experienced to the east. Sitting on one side of the Sado, more river than estuary at this point, Alcácer has many of the ingredients of your typically pretty Alentejo towns – hilltop castle, cobbled streets, whitewashed buildings etc. – but its riverside setting and the robust iron bridge which connects the centre with the opposite bank, combined with the surrounding paddy fields, give it a wildly differing vibe. It’s also a good place for choco frito butties. 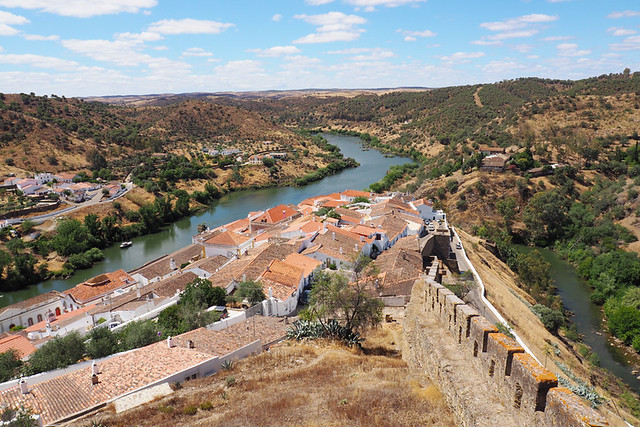 Mértola
We’d never heard of Mértola before we drove into it whilst following a driving route given to us by the Pousada de São Francisco in Beja. Although an attractive old town, Mértola itself isn’t quite as pretty as Marvao. However, its location in the Vale do Guadiana, on a hill above the confluence of two waterways, elevates it to stunner status. The former trading post is located in what is described as Portugal’s hunting capital, and subsequently a good location for anyone who enjoys eating game such as rabbit and partridge. 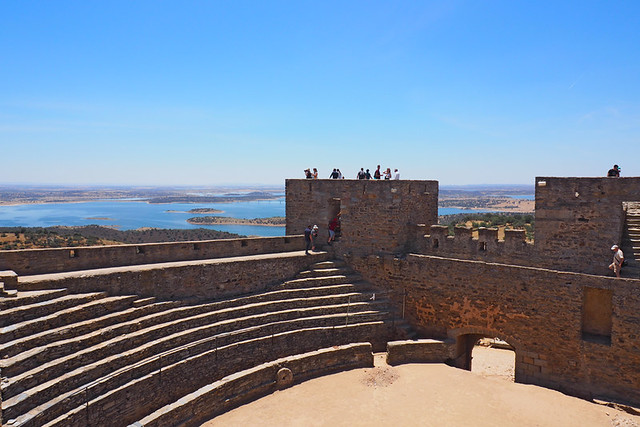 Monsaraz
The day after we visited Mértola, we rolled into Monsaraz. Monsaraz and Marvao could be twins as there are many similarities between the two. Both boast an old castle perched at one end the town; pretty white houses with roofs of orange tiles huddled snuggly within the protective confines of ancient fortified walls; a lofty position looking out across endless flatlands – a wheat coloured patchwork quilt with green and silver flashes courtesy of cork and olive trees. But what Monsaraz has that Marvao doesn’t is the Alqueva Dam Reservoir. Covering 250 square kilometres, it’s Europe’s largest artificial lake. It is so immense it doesn’t look artificial at all, the aqua blue water amidst the golden plains adding extra razzle dazzle to the Alentejo countryside. 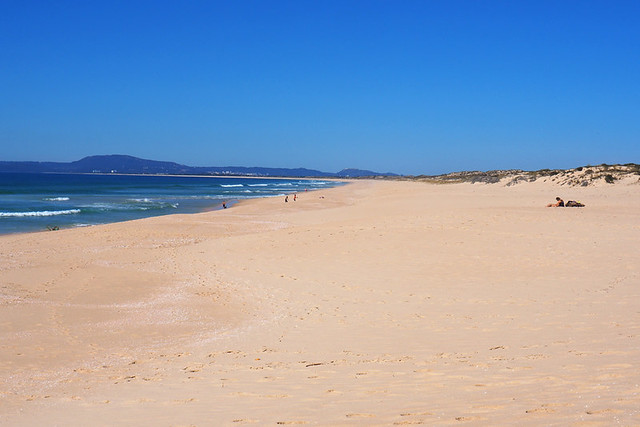 Comparta
By now a lot of people will have heard of Comporta because Madonna rides her horse along the beach there. To be honest, knowing this put us off. Not because we don’t like Madonna, but because we imagined a blingy resort. It’s an image that isn’t helped by those travel articles which describe it as the ‘Hamptons of Portugal’. Even a Tripadvisor Destination Expert for Portugal didn’t dispel this notion by advising it was “just a long strech of sand with expensive beach restaurants and bars…” It’s neither of those things. There is an endless beach where there are a couple of chic restaurants, but the main village is unmistakably traditional, albeit with a more bohemian side than most. It isn’t even on the coast. Anyone turning up in their Jimmy Choos expecting an upmarket coastal holiday resort is in for one hell of a surprise. 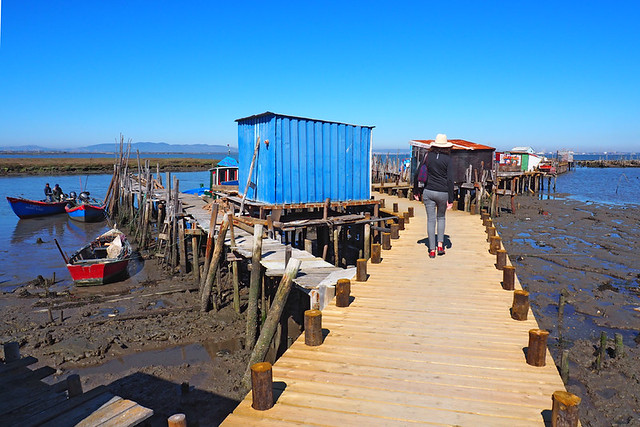 Carrasqueira
And then there’s Carrasqueira, a humble ramshackle fishing settlement on the southern banks of the Sado Estuary. With its dusty streets patrolled by packs of mongrels and the rickety network of fishing jetties which stagger into the estuary’s waters, it feels remote, really remote. It’s close to Setúbal and not far from Lisbon, and yet it could be on the other side of the planet. In some ways it reminds me of some places we visited in Chile; it’s a backwater which feels as though it belongs in a different time.

But then, that could apply to much of Alentejo where there are many places that feel as though they remain rooted in a previous age. That’s part of its multi-faceted and spread out charm.