If I’m honest, the words ‘Germany’ and ‘gastronomy’ have never readily coupled in my mind. In the culinary lexicon of my imagination, it has always been words like hearty, filling and dare I say, even stodgy, that have occupied the Germany pages alongside images of sausages in multiple guises, mounds of sauerkraut, and fat slices of Black Forest Gateau. On the other hand, the Black Forest has long loomed large on my hiking wish list, nurtured by travel accounts of labyrinthine trails threading their way through a fairytale landscape of epic proportions.

Spending ten days walking the Hochschwarzwald (Black Forest Highlands) before moving onto Freiburg and the Kaiserstuhl, the reality of our experience versus our preconceptions was both wide of the mark, and on the nose, in equal measure.

Walking in The Black Forest – Seeing the Wood for the Trees
Arriving at the beginning of October and just as a cold front slipped its icy cloak over the higher ground, the first revelation to hit our retinas was just how extremely un-black the Black Forest is. Emblazoned in autumnal glory, rarely have I seen such vibrant displays as multiple varieties of maple, acer, beech and cypress trees cast off their summer inhibitions and flaunt their gold and crimson hues. 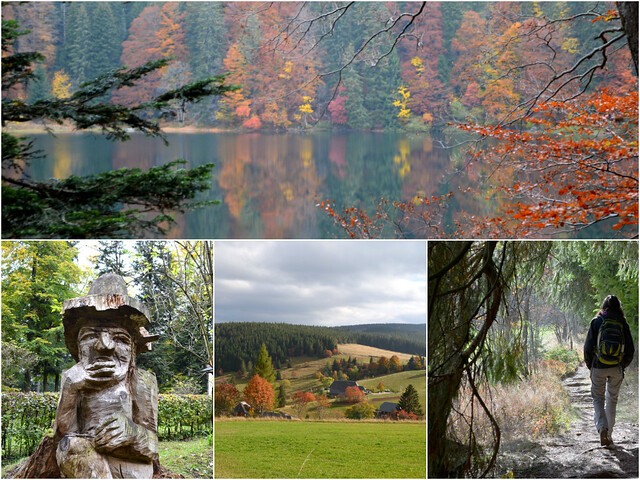 Even without the glory of the season, the multifarious faces of the forest were a joy to explore. Trails so comprehensively waymarked that even the most directionally-challenged of hikers would struggle to get lost on, meander through forests that morph from light and airy, golden leaved beech and ash trees through which the sunlight pours, to dark and brooding, dense firs and pines whose emerald embrace shuts out all ambient noise and light leaving you cosseted in its perfumed cradle.

But walking in the Black Forest is not all about the trees. Every route that we walked emerged frequently into wide open meadows with far reaching panoramas which showcased the full glory of the Schwarzwald. Each day was a new yin and yang adventure trail where we found ourselves stepping through the back of the wardrobe into snow dusted pine forests and then emerging from a wall of wood into sun-filled meadows where thin spirals of woodsmoke rose from chimneys atop oversized roofs whose eaves swept down to the earth. From circumnavigating their shores to stumbling across one hidden deep inside a forest, manifold lakes are another outstanding feature of the Schwarzwald, bringing a compelling tranquillity and reflected glory to the already arresting landscape. 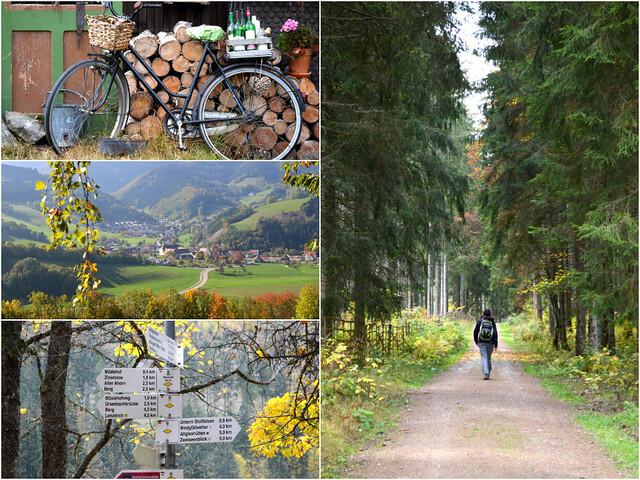 In its swaddling environment, the Black Forest liberates your mind from the mundanity of the outside world, leaving it free to wander its own trails. Understanding the relationship between the forest and those who live within its confines is one such journey within a journey, a gradual awakening that seeps further into your consciousness with each day spent on its paths.

Wining & Dining around the Black Forest
There’s no escaping the fact that the kuchen of choice in the Black Forest is its eponymous Gateau. Far from the synthetic mush that still makes its way onto our supermarket shelves, the ‘real thing’ is light, moist, rich in cherries and cream, and perfect with a cup of coffee at around 4pm. Equally, the ubiquitous wurst is a welcome sight after a long, cold day’s hiking. Particularly memorable wurst experiences were wild boar sausage (complete with the obligatory sauerkraut) at a specialist restaurant in Freiburg; the city’s famous red sausage, Lange Rota, served steaming hot in a bun from stalls in Münsterplatz, and a flavoursome currywurst in a lakeside hütte in Schluchsee. 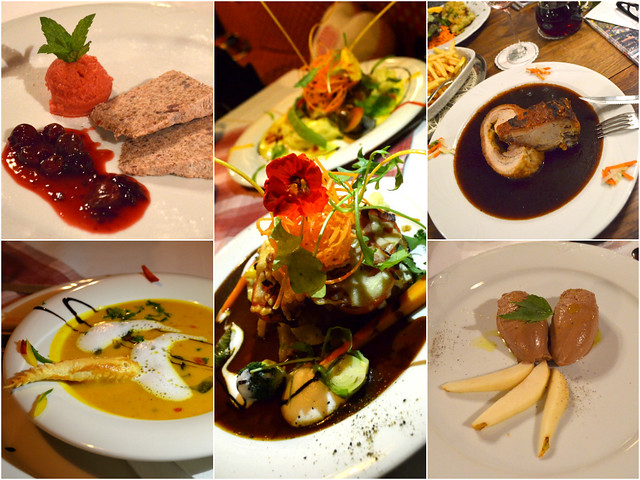 But that’s not why the Black Forest makes it onto our recommended gastro-hike destinations list.

Presumably influenced by its proximity to the French border, this region of south west Germany punches far above the culinary weight of the country as a whole and has no less than 28 Michelin Star restaurants within its borders. Blessed with a ready supply of wild herbs, nuts, mushrooms, venison, wild boar, lake fish and fruits, we encountered superb food, sometimes even in the smallest gasthaus or hütte where traditional recipes were being creatively reinvented using local produce so fresh it transported you right back to the trail. 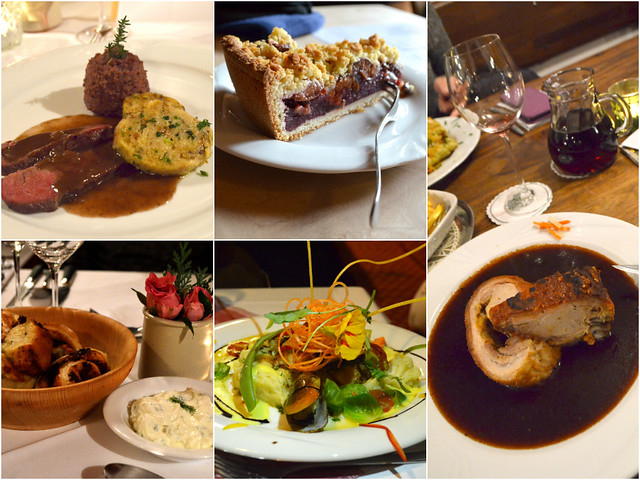 One night in Falkau, falteringly making our way along unlit forest paths by the light of a phone torch, we arrived at a little Gasthaus where the presentation was somewhat over dressed but the taste of the dishes was superb. A balance of German and New Zealand specialities to reflect the nationalities of the husband and wife team who run it, Bierhausle prepared a moist and flaky piece of fresh lake perch in a saffron foam along with a dangerously quaffable pinot noir from a local vineyard. 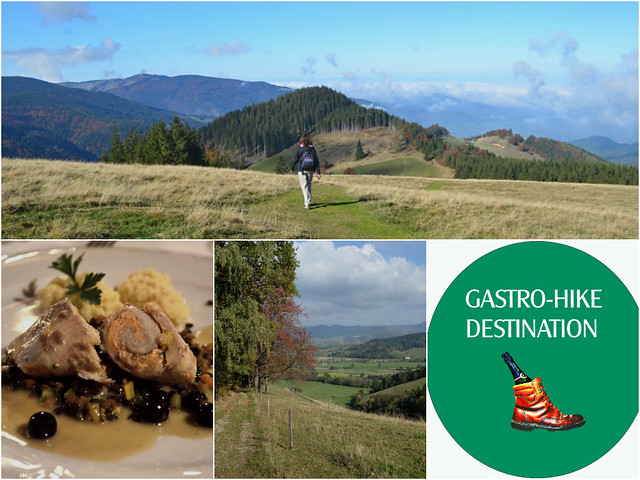 Before we went, we had high hopes for the Black Forest as a hiking destination but little hope as a gastronomic one. In hiking terms it exceeded expectations and as a foodie destination, it blew them out of the water altogether.