“Anything new and exciting happening in Porto?”

“No, not really,” the man behind the counter of the tourist board office shrugged.

“We’re updating a guide with information about the city and want to make sure we don’t miss anything.”

“Send an email,” the man replied.

“Then send it when you get back to Britain.”

Mostly we avoid tourist boards in destinations we visit for a couple of reasons. Some are exceptionally helpful when it comes to pointing us in the direction of things which might be different, quirky or new. But too many are of the ‘draw circles on a map of the places everyone knows anyway’ school. 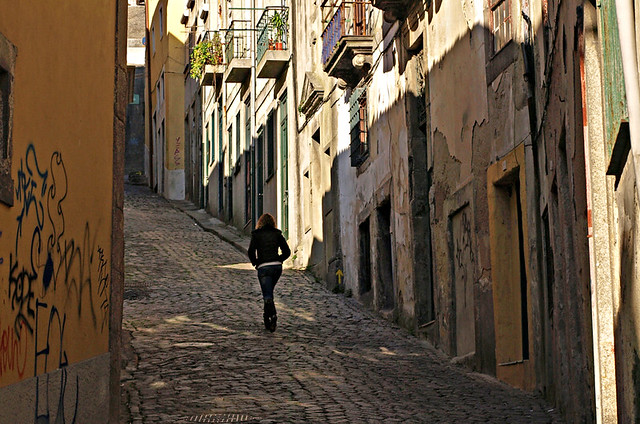 We left the office none the wiser and reminded ourselves that everyone else we’d spoken to since arriving in Porto had been extremely welcoming and friendly.

The ironic thing was that there had clearly been significant changes in Porto since our previous visit. Whilst fundamentally it retains the same faded grandeur personality, some areas are still in the process of being given a serious makeover. Streets which only a few years ago had appeared rundown and borderline seedy have blossomed into arty, colourful and bohemian walkways. 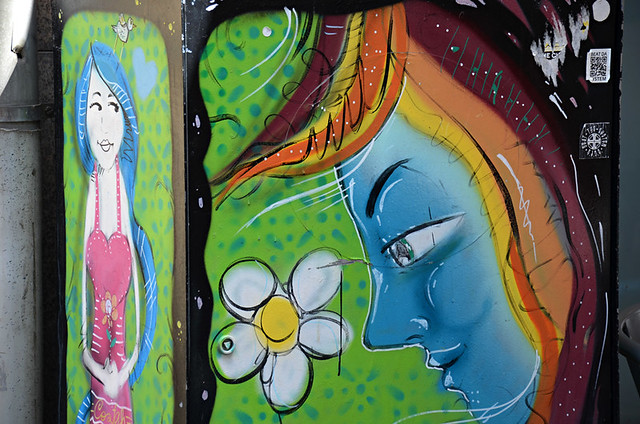 The route from uptown Porto to the Douro via Rua das Flores is a prime example. Last time we were in Porto we felt as though we’d strayed from the path when we stood on its quiet cobbles, now it’s one of the busiest streets in the city. It doesn’t take a sharp detective with questionable social skills to figure out why. 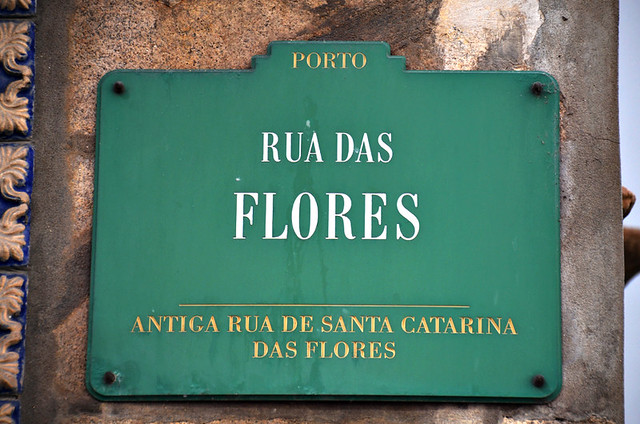 Rua de Santa Catarina das Flores, to give it its full name, dates back to 1521 when it was built by order of King Manuel. For centuries it was one of the busiest trading streets in Porto, but in more recent years it played the supporting role of one of those inner city streets which tended to be ignored by visitors. Its rebirth came about after it was pedestrianised in 2013 and many of the historic buildings which line it were given a much needed facelift. 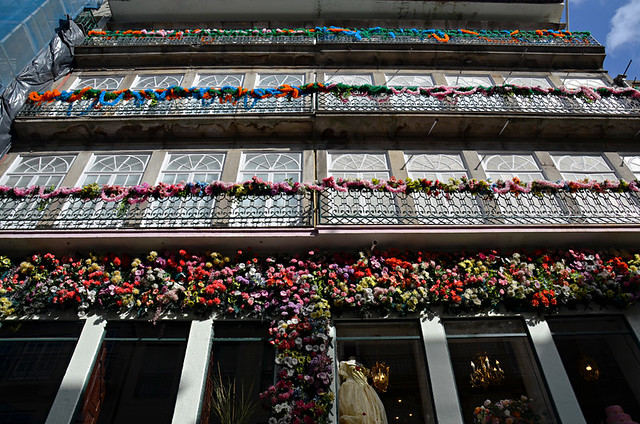 Ironically, despite a shop facade decorated with floral garlands at the start of the route, there aren’t many flowers along the street of flowers, but there is vibrancy and colour. Electricity boxes have been transformed into witty and beautiful features; it’s worth treading the street for these alone. 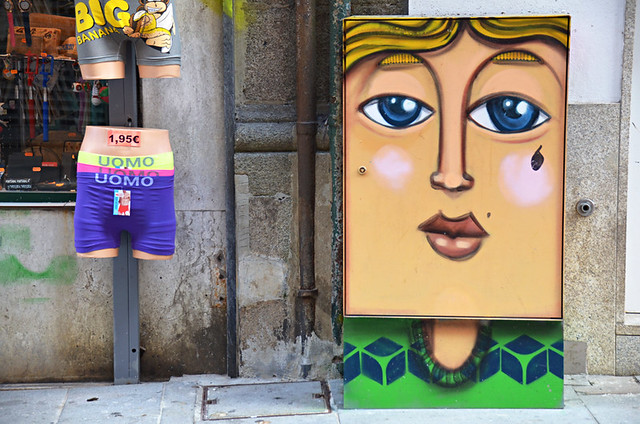 Each cosy café and coffee shop looks as though it was created by and for artists. The road is lined with inviting places to eat and drink, arty establishments where you feel a book under the arm would be an essential accessory. Restaurants are of the intimate variety and feature creative menus. Hostels look more like boutique hotels. Shops are quirky and independent; present buying must be joyfully easy on a street such as Rua das Flores. Even street hawkers ooze artistic talent – gorgeous urban photos or paintings are pinned to strings on walls with little notes asking you to make a donation if you take one. 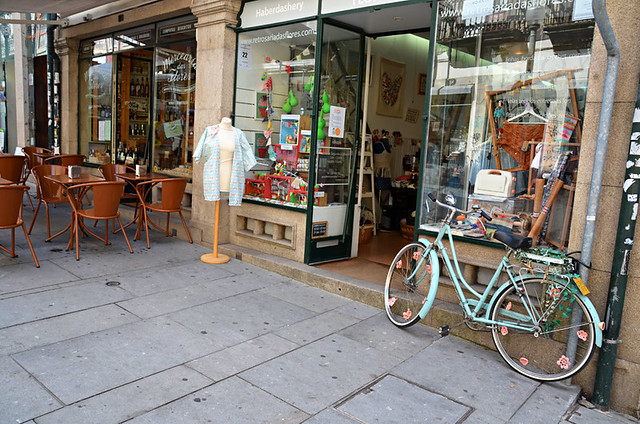 In a way it’s a wonderfully decadent street: too many places tempting you to eat, drink and part with your cash. We succumbed, buying bars of chocolate hand made using cocoa beans from equatorial countries. Their flavours included passion fruit, salted caramel, and port. They were so intoxicating they could have been created by Willy Wonka himself. 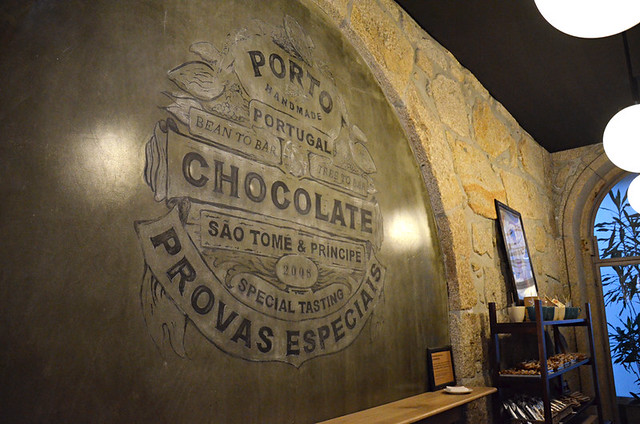 But it’s not all bohemian decadence, history is never far from your side as you wander wide-eyed. The past resonates from the painted tiles of smart town houses, the fancy facades of pharmacies and the Rococo richness of the 16th century Church and Museum of Misericórdia. 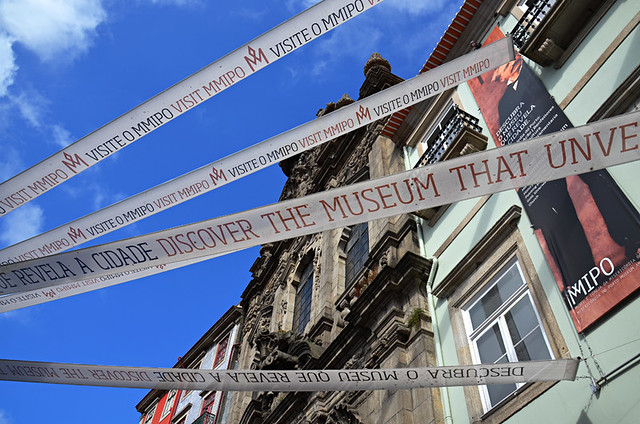 Last time we visited the streets between uptown Porto and the river were a bit of a chore to be negotiated when we wanted to enjoy the bustling river front scene. Now I actually prefer them to the hustle and bustle of the northern bank. 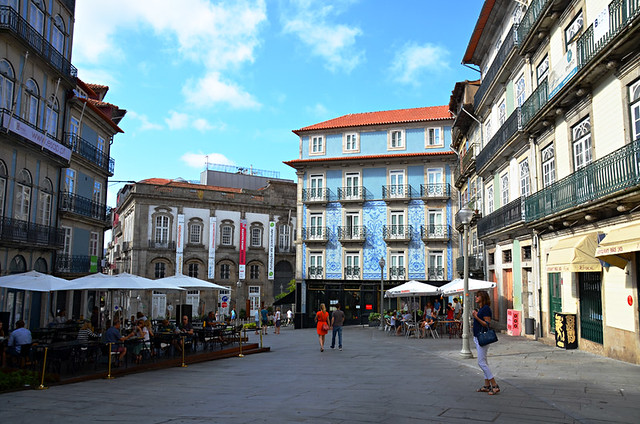 Old is the new ‘new’, and a city which was already a charmer is even better as a result.