“No it isn’t, it’s a rainbow of colours as it happens.”

Saying that, I didn’t peer into its seemingly infinite depths as a Roman Empire with subjugation and empire building on my mind. There is a darkness if you view it that way; a mysterious blackness which is more of a deterrent than the sturdiest castle walls.

No, we came to the Black Forest, hopefully, as friends who wanted to explore and be welcomed by its benevolent boughs. 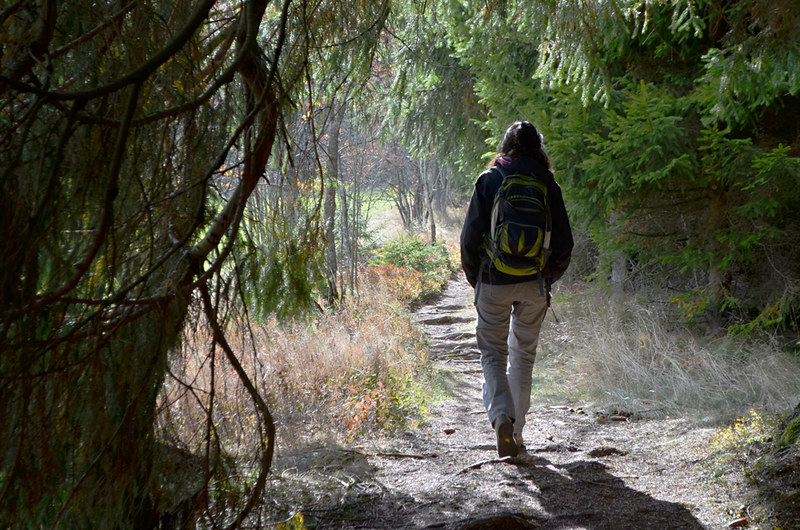 I have a great respect for forests, but in a different way from the respect I show the sea. One is a force of nature not to be toyed with, the other is less lively but no less dangerous if you don’t acknowledge its power. Forests swallow people. Stray from the path and it is easy to lose your way.

But there is also enchantment within the depths of forests; something you can’t quite put your finger on in the light breeze that wafts through the branches. Each forest stirs different emotions. Some are comforting, some unsettling. There were two forests on each side of the bay on the island where I grew up. One I felt on easy terms with and I strolled through it in no hurry to leave its comforting shelter. With the other I always quickened my pace, eager to escape back into the light.

Forests have different personalities. They are the location of many a fairytale, grim or otherwise, for a reason. 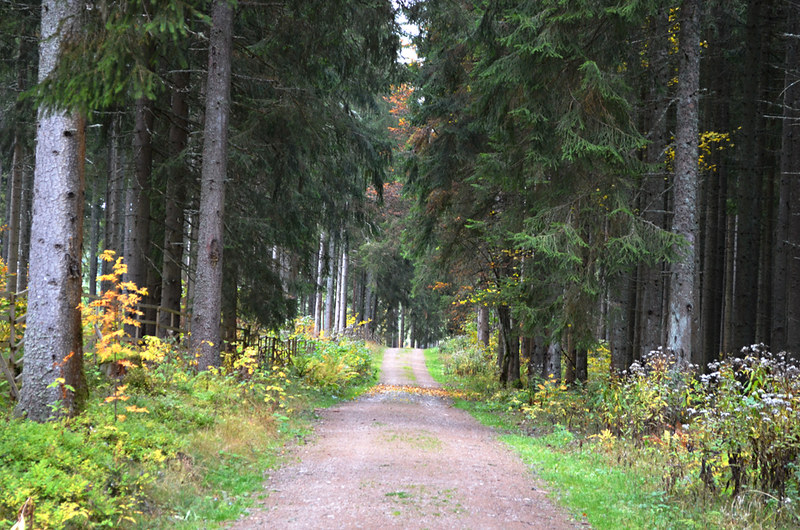 Fir trees are friendly. Maybe it’s because of the connection with cosiness, family gatherings and good times (mostly). Our first route, following in the path of countless shepherd boys, took us through a verdant section of the forest with low soft boughs that at times felt as though they patted me on my shoulders in an encouraging manner. 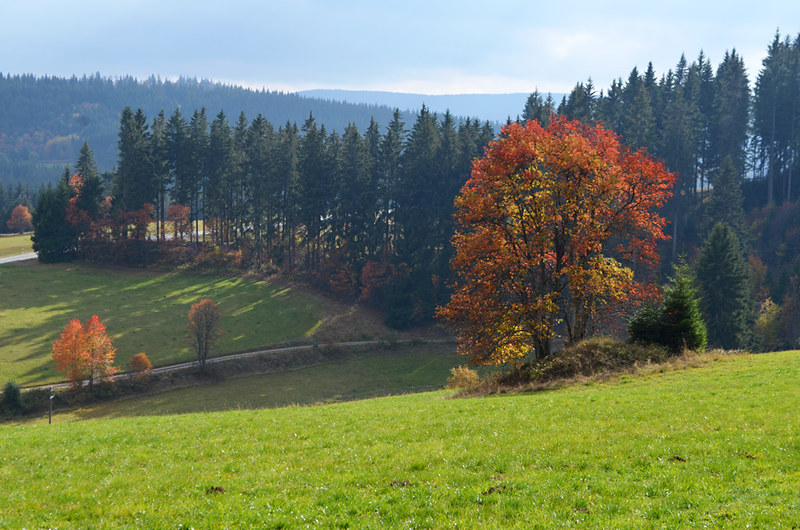 Emerging from the forest every now and again to walk across grassy meadows opened up views of landscapes where man and nature seemed to be able to get on quietly with each other; the world of man and the wild blended together seamlessly; in some instances the open meadows acted as a stage for flamboyant stars of the forest.

The Not So Black Forest 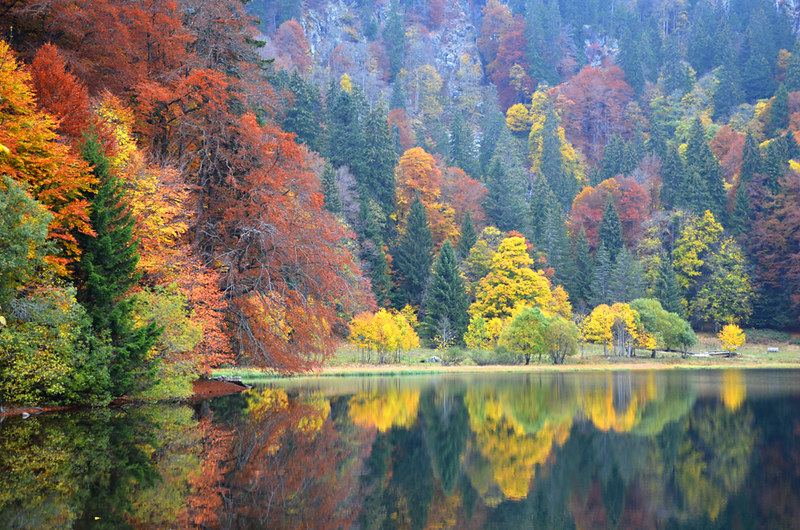 On the dreichest of days where the cloud had reached down to the tips of the trees, robbing the world of colour, Feldsee remained defiant, forcing our mouths to fall open cartoon fashion with a display of colours that transfixed. I’d never seen so much diversity of colour and shape in a forest before, let alone one small section of forest. A magical highlight. 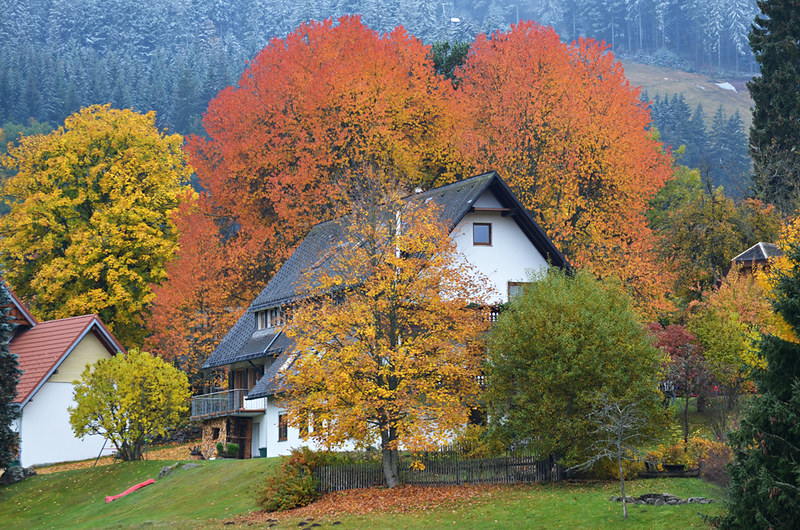 A huge cardboard cut-out? Photoshop tricks? The more I stared at this tree from the platform of Altglashütten’s tiny railway station, the more unreal it looked. Stunningly beautiful but one dimensional, like an oversized photograph used to frame the house. I waited vainly for the sun to bring the colour even more to life, but it wasn’t obliging. We returned to this spot near the very end of our journey and the sun was shining, but by then the leaves had departed. 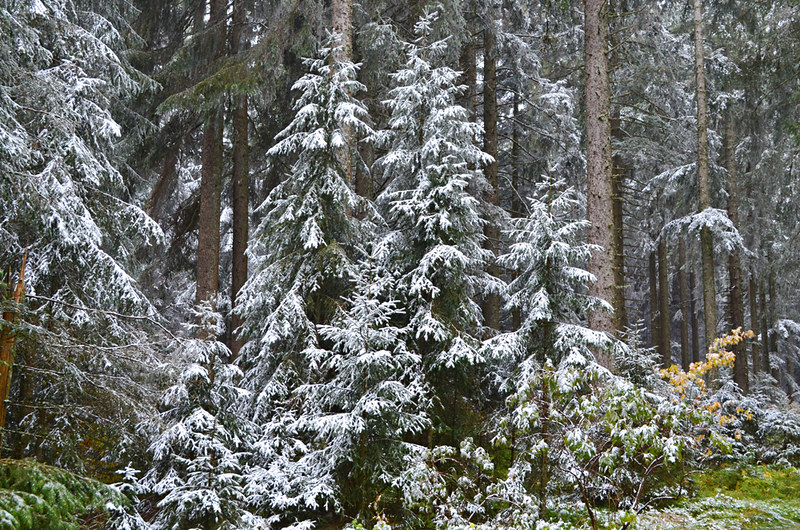 Moving on to our next hotel in a remote valley near Hinterzarten took us up and over the hills, ascending into an unexpected (unexpected until we opened the curtains that morning to see snow falling) wintry wonderland where the snow looked as though it could have been sprayed on to the branches. Time slipped away as we were spellbound by a world which could have come straight out of The Lion, the Witch and the Wardrobe. 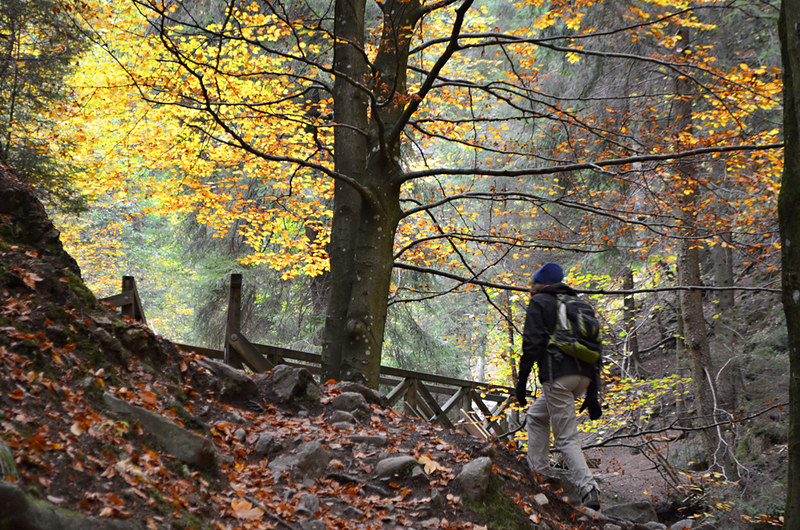 In the depths of the dark woods where everything else is muted green or grey, a tree glows golden. Why is that? Tell me there is no magic at play in those forested lands. 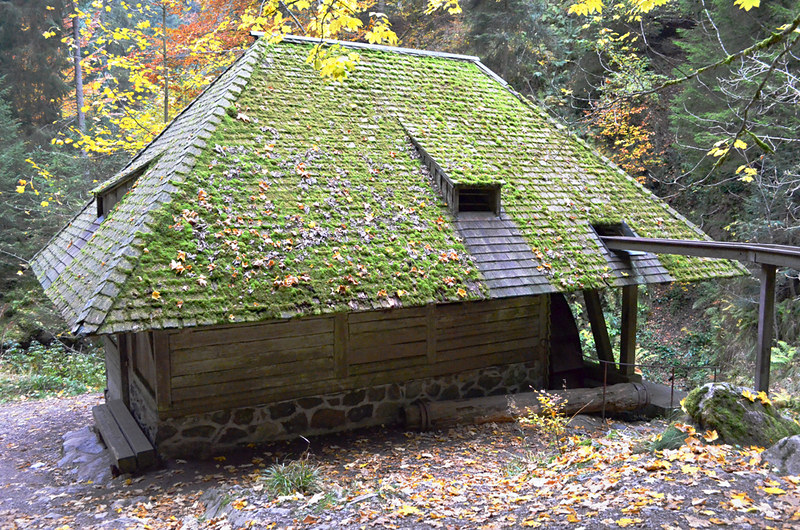 As much a part of the forest as the firs, beeches and oaks. Linger a while and you would be sure to see a girl in a red cloak come skipping along the path. 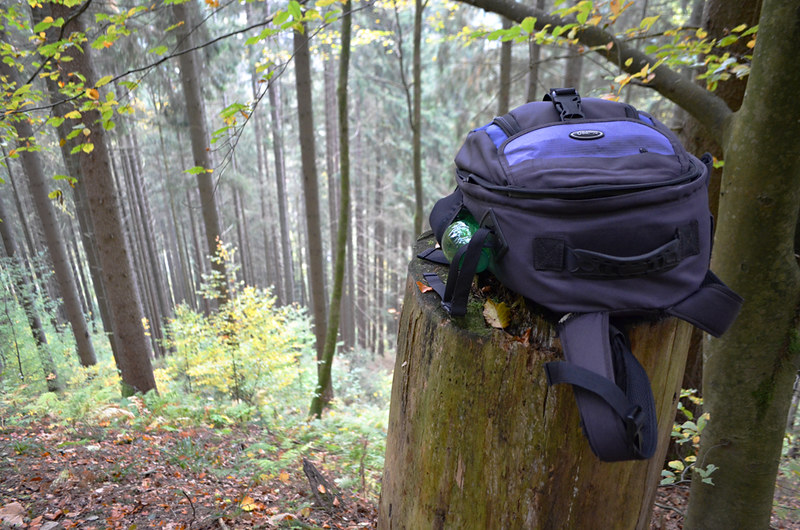 There was one short stretch which did motivate a quickening of the step. The imagination was stoked initially by strange tiny unexplained constructions at the base of a couple trees. Here the land fell away steeply and the thin trunks closed ranks to form an impenetrable curtain. 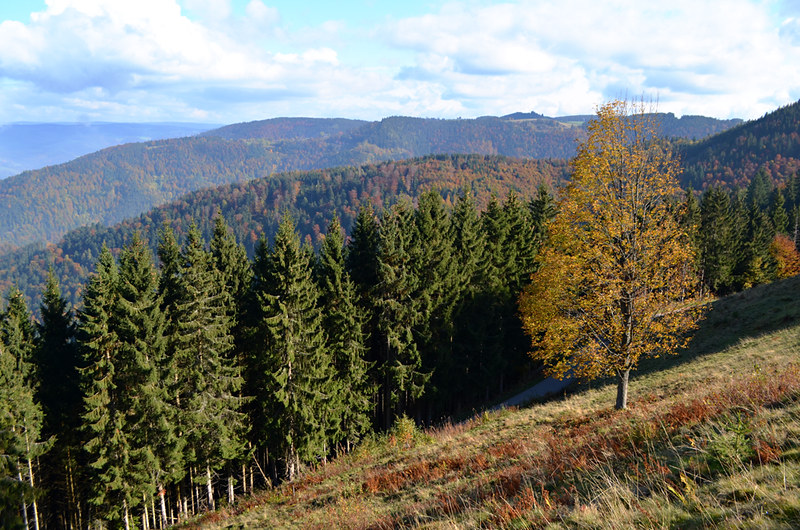 I wonder if trees like this are considered the golden sheep of the forest family? Maybe it’s a Roman general, alongside his centurion ranks, trapped by a spell cast by a wizard of the woods.

Light in the Darkness 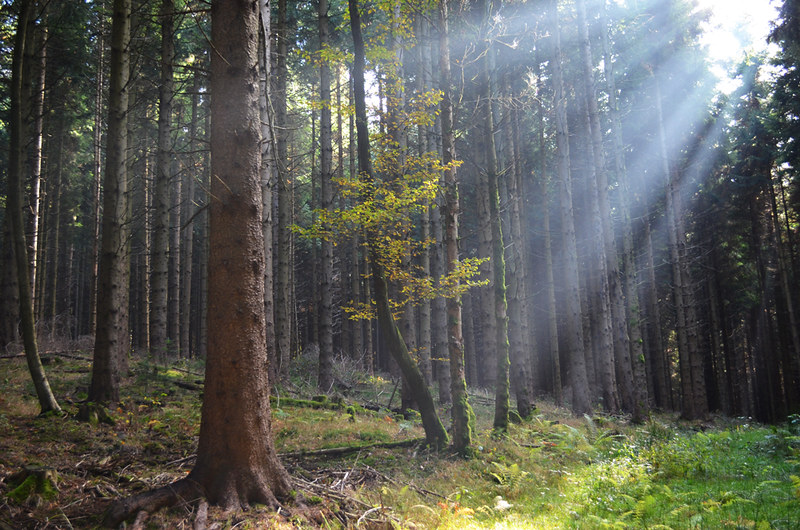 I make no apologies if I’ve increasingly slipped into a realm of fantasy and fairytales, spouting fanciful notions. Ultimately that’s what the Black Forest evoked. The domain of the trees became my whole world for two weeks. It was a very different place from the one I normally inhabit and I don’t just mean that geographically or culturally. The Black Forest cast a powerful spell and I confess to being captivated by its ever-changing personalities and moods.

Walking from Feldberg to Freiburg I like to think we got to know the Black Forest reasonably well. Whether we made friends with the trees I don’t know, but at least they didn’t devour us.