There’s a poster on the wall in the bar. It’s a picture of a handgun and we’re looking straight down the barrel. The space around the gun is peppered with bullet holes. The text simply reads: “We don’t dial 911”. 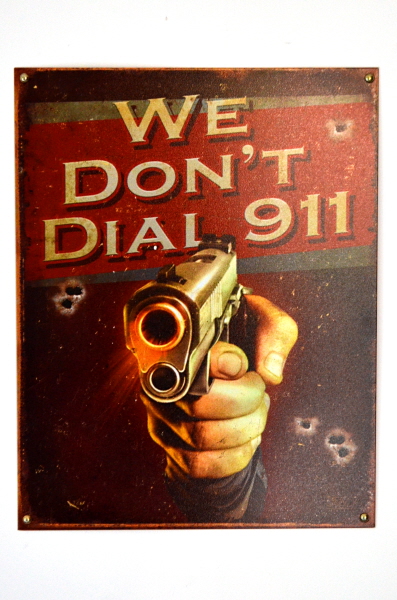 “Every Corsican keeps a shotgun under the seat of his car…” our guide nonchalantly informs us as he drives us from the airport, along the Cap Corse coastline, watching the moonlight ripple over the dark waters of the Mediterranean.
“…But that’s for feuds that have raged for generations. Tourists are okay. Just don’t talk politics. And don’t get into an argument, or if you do, don’t call me!” He laughs and we laugh with him.

The next morning we follow a winding trail through the impossibly pretty villages that are strung along the Sisco valley at the foot of Monte Cagnolu and Monte Corvo. Stone cottages with crooked windows line a maze of uneven cobbled streets, their gardens spilling over gates; flowers escaping from window boxes and tumbling down deviant walls; dogs sleeping in the shade, unwilling even to open an eye at our passing. On our way back, we call into a charming chambre d´hôte where the owner, Pierre Jean, takes us on a tour of the farmyard. 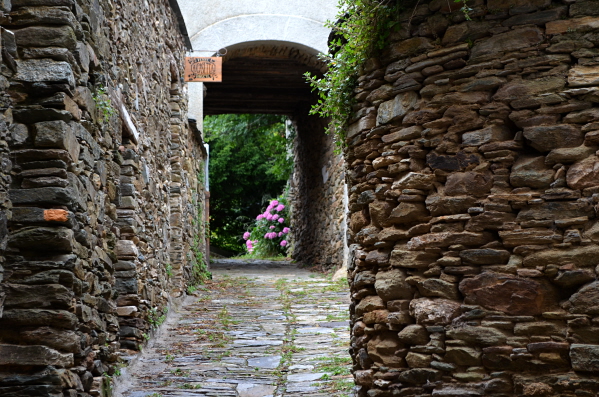 A menagerie of pigs, chickens, rabbits, goats and a pet donkey are contentedly snuffling and grazing in the dappled sunlight of the farmyard and orchards. The pigs are even being true to their adage and are rolling around in muck with what I swear are smiles on their faces. It’s an idyllic scene and we slip into relaxed conversation in our stuttering French until Pierre Jean asks us where we come from. With newspapers and radio broadcasts across Europe buzzing with Brexit and the ugly face of nationalism that has raised its head in the UK, we default to our roots.
“Andy’s of Irish descent,” says Jack. “And I’m Scottish.”
“Scottish!” Says Pierre Jean, his interest ignited. “People who are not afraid to fight for independence?”

The blood freezes in my veins. “Just don’t talk politics” is still ringing in my ears. We’ve been here for precisely 16hrs and already we appear to be on the brink of a political discussion. We wait for the next words to come from Pierre Jean’s mouth.
“My favourite film of all time is Braveheart!” And his face lights up as we three become instant brothers-in-arms. After that, we can’t get away. He showers us with home made pâte and cakes, fresh orange juice and stories of how good his English is after a few whiskies. 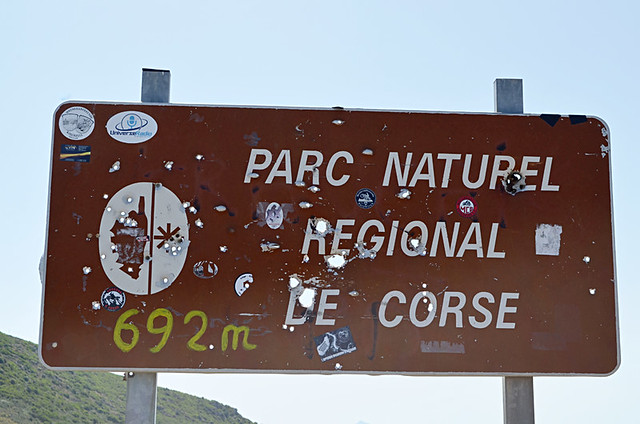 Driving across the mountains of the north a few days later, we stop at a viewpoint on the edge of the Parc Naturel de Corse where the sign proclaiming the boundary of the park, is riddled with bullet holes.
“That’s very common,” says Anthony, “I guess there’s not much else around here to use as target practice.” Continuing our journey across the mountains, we pass several more road signs peppered in bullet holes. I mentally speculate on who might have created them; a group of bored teenagers on a Saturday night; a drunken farmer; an angry partisan; an off-duty Legionnaire. 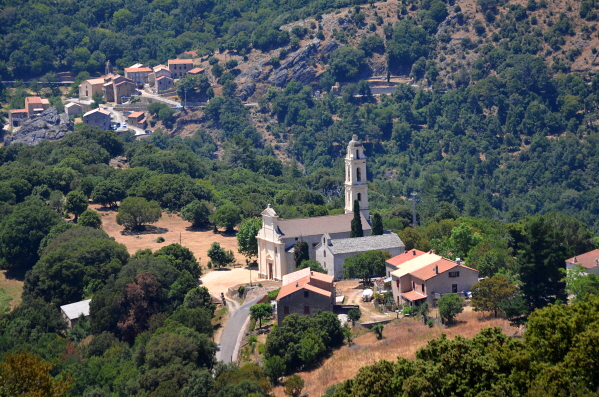 There’s not much to the village of Olmi Cappella, just a smattering of honey coloured houses shimmering in the heat haze of a green valley at the foot of the mountains. The air is oppressive, thick with the scent of flowers and resonating with the sound of insects touring the orchards, loading their legs with pollen. Apart from the church and a small supermarket with erratic opening hours, the only sign of life is the bar/restaurant L’Osteria where, alongside a small terrace overlooking the mountains, a bachelor pad-style lounge with a giant screen advertises forthcoming games of Euro ’16. That’s where I see the poster that tells me Corsicans don’t dial 911.

Inside the bar which lies on the other side of the street, is a drawing of three skulls wearing red neckerchiefs. One has his tied over his ears, the second is using it as a blindfold and the third wears it robber style, across his mouth. It’s Three Wise Monkeys morphed into Hell’s Angels.
“That’s the three of us,” says the chef, Ivan, proudly. He’s referring to the waiter, a young lad with a smiley face and a smattering of English; the boss, a small, gruff looking man whose face is not naturally given to smiling and who I could easily imagine shooting at traffic signs; and himself. 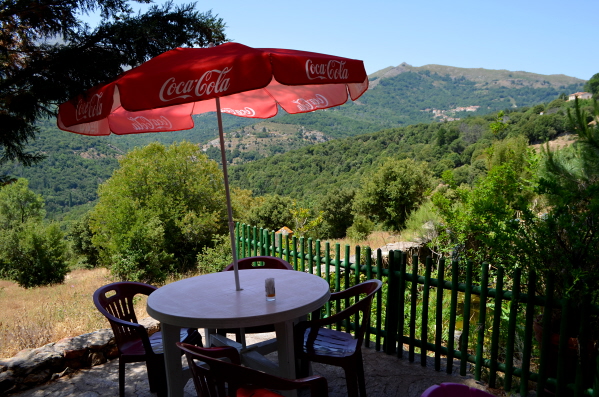 That evening, as we finish our wine while watching the sun slide towards the horizon, Ivan is rummaging around at the edge of the small pond on the terrace. I assume he’s going to switch on some lights but he emerges with a worried look on his face. A few moments later the boss emerges. The two men extend the rummaging activity from the pond to the front of the terrace.

Tentatively, we ask what they’re doing.
“We’re looking for Sacha,” they say, their brows knotted in anguish. Suddenly the owner shouts: “He’s here!”
Emerging triumphant from the undergrowth he holds a small tortoise aloft before placing him gently onto the terrace. Both men smile down at the tortoise as if watching their son take his first steps. Ivan runs into the bar and re-emerges with a strawberry which Sacha tucks into with gusto. I think about the poster of the skulls and wonder if it’s meant to be ironic.

From the terrace of our chambre d’hôte, over a table laden with fresh fruits from the garden, home made jams, freshly squeezed orange juice and a pot of coffee in a porcelain pot, we stare over the mountains bathed in morning sun, thin slivers of trails running across their faces. The air is not yet hot enough to distort the picture but within the hour, their mighty bulk will shimmer like a mirage. 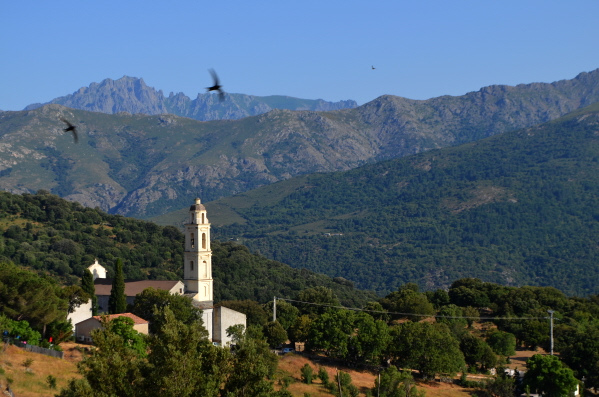 A fellow guest is getting ready to continue his journey. A quiet, contemplative Scandinavian who looks a little like Daniel Craig, this is no novice hiker. His personal journey is taking him into those mountains this morning where two days ago, he had to turn back, exhausted and lost, unable to find the trail locals assured him was there. Every summer he returns to Corsica to tackle those mountains again.
“I’m in love with this island,” he tells us, choosing his words slowly and carefully. He looks up at the peak of Padro which is still wearing vestiges of snow and where he’s heading. His eyes narrow. “I don’t know how to stay away.”

Even now, at 8am, the heat is oppressive and we almost feel guilty as we bid au revoir and bon chance to the hardcore hiker, pick another cherry from the bowl and enjoy the shade of the terrace before embarking on what will be a gentle walk to a crystal river beneath old, stone, Genoese bridges. The ever-smiling Françoise brings some more toasted baguettes and offers to top up our coffee while his wife, Antonia, sits at her easel in the kitchen window, capturing the beauty of Monte Padro in oils. The contrast of serenity and power couldn’t be more marked.

Corsica has taken me by surprise in many ways. I had heard it was beautiful, I wasn’t prepared for the scale and diversity of that beauty. I had heard the hiking was tough, I hadn’t realised just how unforgiving those mountains really are. I had heard the Corsicans were not to be messed with, I never imagined they could also be so charming and welcoming.

There’s no doubt the Corsicans trade on their reputation as the hard men of Europe. The most popular T shirts in the souvenir shops of Calvi proclaim “We don’t take orders, we’re Corsican”. But, like the mountains that dominate the island, as long as you respect the power that you know lies within, whatever private feuds they indulge in and however many road signs they regularly shoot at, we found them to have a great sense of humour and to take genuine pleasure in welcoming visitors to their island.

Just don’t get into an argument with them and don’t talk politics, unless you’re Scottish.