The landscape is thirsty, the skeletal remains of grasses which weren’t exactly bushy to begin with look tinder-dry. Even in one of the sunniest spots of a sun-kissed island you might expect a dash more greenery in midwinter. But water, or lack of, has historically been a problem on these arid slopes. Plump prickly pears do their best to add a splash of colour to the muted canvas, but with limited success. 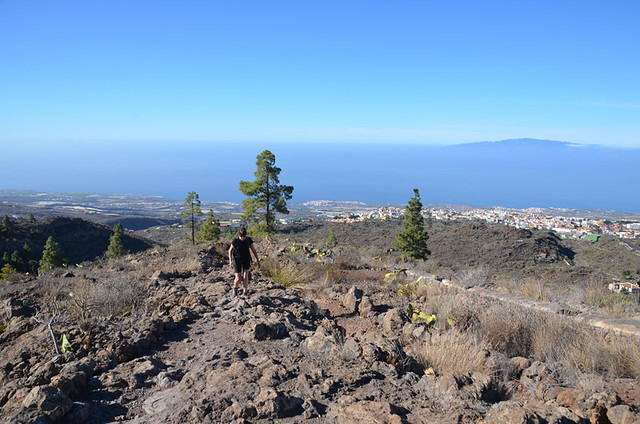 Our pebble-dashed, volcanic trail takes us from the edge of a sparse gathering of pines toward the coast and a sea which, after the island of La Gomera (on view) and El Hierro (hidden) dips beyond the horizon to continue all the way to the Americas.

This is an area where street names, chunky black letters painted on white tiles, act as a description of local features – Lomo Los Pinos, Los Madroños, Hoya de las Burras. We don’t dwell long on pondering how the last earned its name.
We pass through dormant hamlets of traditional campesino buildings with sun-bleached wooden door and window frames, and whitewashed walls which are broken by the occasional exposed boulder. Linking the hamlets are hard, rough paths of sharp pebbles which test the thickness of our walking boots. These are lined by water canals, troughs, threshing circles, and lime kilns – remnants of a not so distant past. 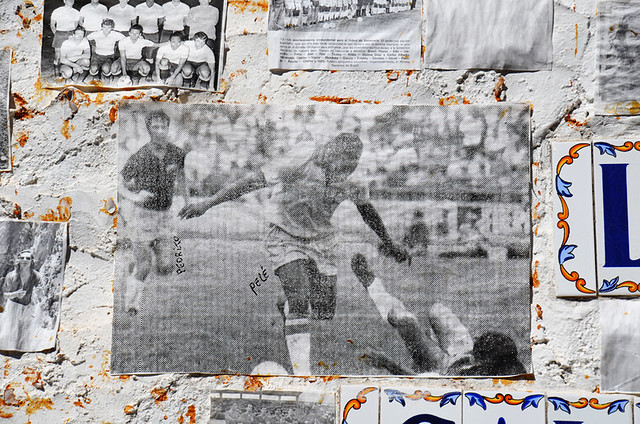 One building in particular piques our interest, Cabaña La Galipani. It stands out from others of its ilk because one wall is entirely plastered with newspaper cuttings. As we move closer to read the desaturated snippets, a dry voice announces itself to be the subject of the articles – Pedrito, a Portuguese footballer.

His face betrays the weather-beaten look of someone who has spent decades outdoors in a sunny climate. But there’s also a lithe youthfulness to him which makes it impossible to guess his age, something we only try to do out of curiosity because some of the photos of him at the height of his career date from sixty years ago. Pedrito eases onto a bench in front of his open air photo album and shares a few tales from a very different life. A time when he pulled on the national strip of his homeland Portugal to play against such masters of the game as Edson Arantes do Nascimento – Pelé – during the Brazilian football team’s tour of Europe, just before they went on to lift the World Cup in 1958. 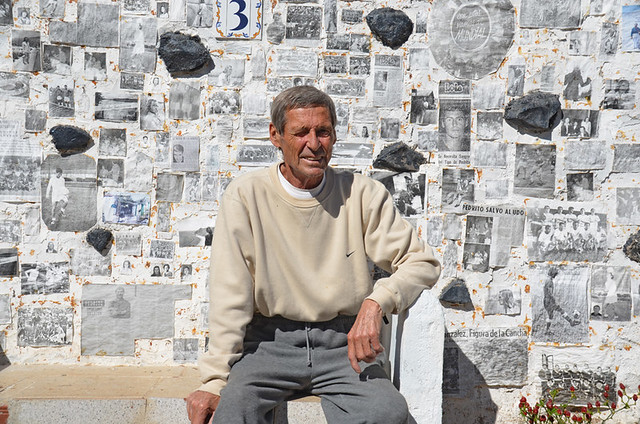 He’s more than happy to pass some time with us, reminiscing on his Tenerife hillside on a warm January day, and he’s a joy to listen to – as well as being somewhat of a curio. It’s not every day you bump into a former international footballer on a quiet hiking trail on an island in the Atlantic.

As we say our farewells to Pedrito he asks us to wait and ducks back inside a gate to his house where we briefly glance a shady courtyard. He returns a couple of moments later with a handful of mandarins.

We smile and thank him for his time and generosity, and wonder about preordained paths.

Twenty minutes earlier we’d eaten two juicy oranges which had travelled in our rucksacks from a farm in central Portugal. There’s a satisfying equilibrium to the fact our Portuguese oranges have been replaced by mandarins grown on a Spanish island by a Portuguese football player.