“Have you seen any piglets,” the young man with a Jon Snow beard (Game of Thrones not the newsreader) seemed amused at his own question.
“Piglets?” I don’t know what we’d expected when the 4×4 drew level with us on the dirt track in the hills on El Hierro, but it wasn’t a question about piglets.
“Little black piglets” he laughed. “Ours have…” he hesitated. “… escaped.”
“No, no piglets. Some sheep and a kestrel, but no black piglets.” 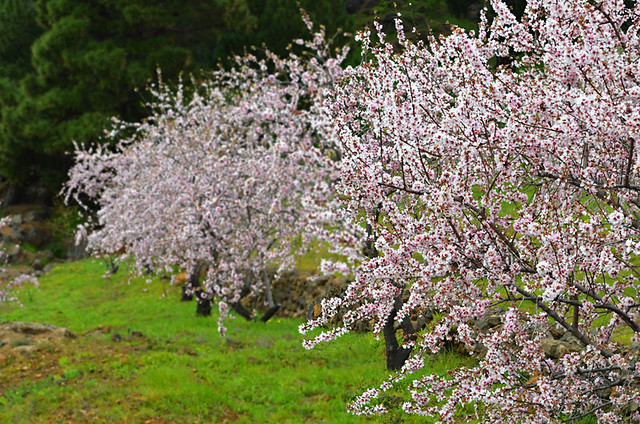 He drove off and we carried on our way between dry stone walls topped on one side by blossoming almond trees and prickly pear on the other.
After a couple of hundred yards we emerged at a crossroads where an elderly woman in a straw hat stood outside a stone cottage. She looked concerned.

“Have you seen any piglets?” She asked.
“Black piglets?”
“Yes,” her eyes lit up.
“No, sorry. We met a man looking for piglets.”
“Ay,” she put her hand to her mouth. “I only left the gate open for a moment… and they were gone.”

Aha, the culprit. No wonder she looked concerned.

We left her calling names (presumably those of the missing piglets) into the misty low cloud. 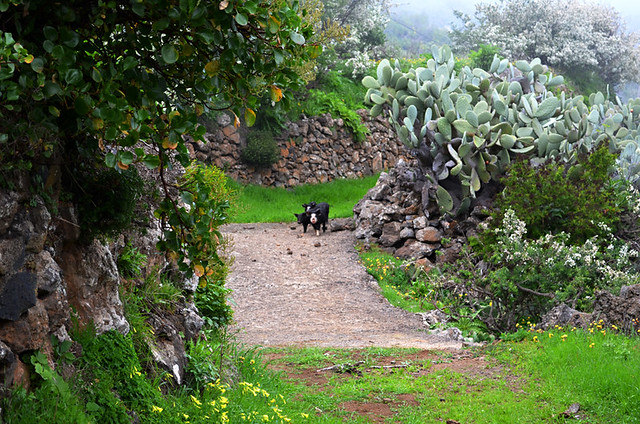 We’d walked barely two hundred metres when there was a scuffling in the grasses in front of us and a quartet of guilty looking pink-snouted, black piglets emerged from the undergrowth.

Andy ran back to the house whilst I kept track of the piglets’ movements. This wasn’t difficult as they decided that, as they didn’t recognise me, I was no threat. Instead of legging it, they trotted toward me, pausing every so often to snuffle in the verge. 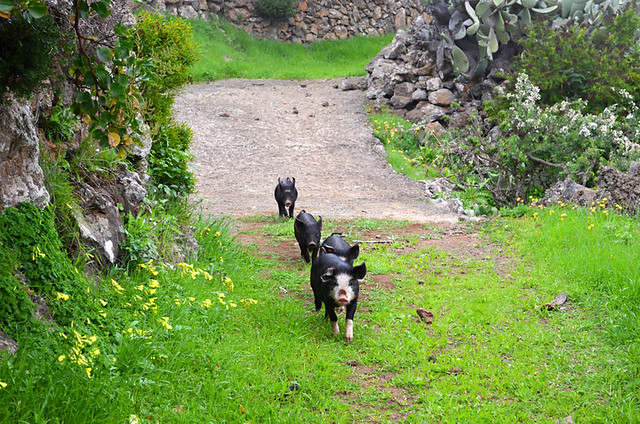 As they drew level I hatched a plan.

Once they were past me, the stone walls acted as a barrier to any further escape attempts. I could drive them all the way home.

As the pigs passed me I raised my arms and shouted ‘vamos, vamos’ to encourage them to trot homewards.

It worked perfectly. The little pigs took off at a brisk pace. 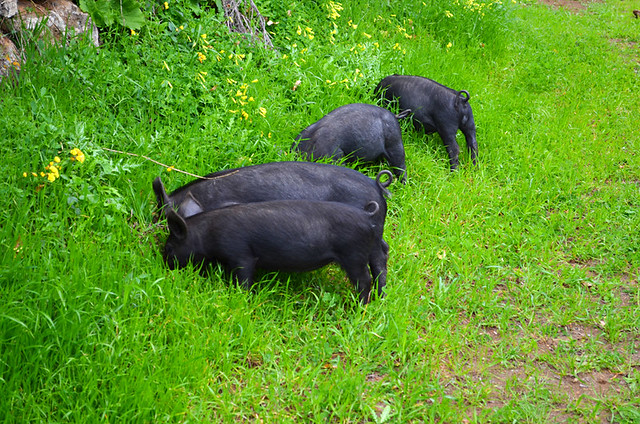 Unfortunately I’d forgotten there was a crossroads between me and the house. Instead of heading straight across it (to home), the piglets veered right. Thankfully the lure of the grassy verges halted them in their tracks before they travelled too far.

I started the whole process again. The piglets were in no hurry to trot in my direction so I put my hands behind my back, whistled innocently and sauntered slowly past them without looking in their direction. 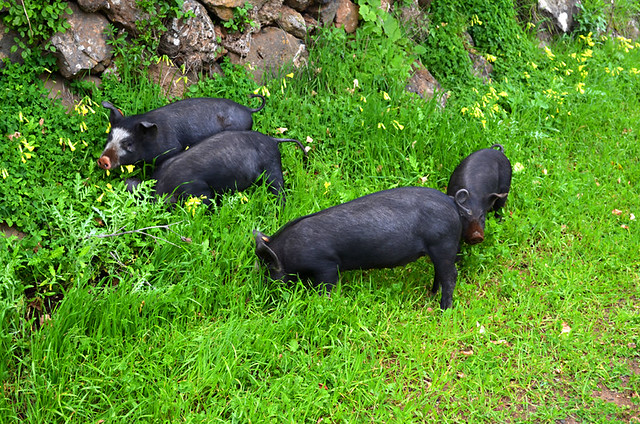 Basic, but it worked. Once again we were ‘vamos-ing’ along the track. This time when they reached the crossroads they took the lane heading to home… and ran right through a big gap in the wall into a field where they disappeared into tall grass.

By this time Andy had found a third ‘searcher’, the old lady had also gone missing, who arrived within moments of the piglets doing another vanishing trick.

“Piglets?” He grunted, obviously a man who was economic with his words.

I pointed at the field.

“Where?” Another one word question.

The branches of an almond tree shook as if a small hurricane was blowing, or possibly a quartet of piglets were snuffling enthusiastically around its roots. As there was no wind…

I pointed at the shaking tree. The man was no animal tracker.

We left him to round up the errant animals and carried on our way.

We should have been happy that we’d found the escaped piglets but the truth is we felt quite guilty at cutting short the piglets’ little adventure. They looked as though they were having a great time.