Enchanted and forests – two words which skip happily along together like Little Red on her way to see Granny. We recently walked a trail through the Bosque Encantando in Chile; it was an enchanting trail, but not really what I’d call an enchanted forest. 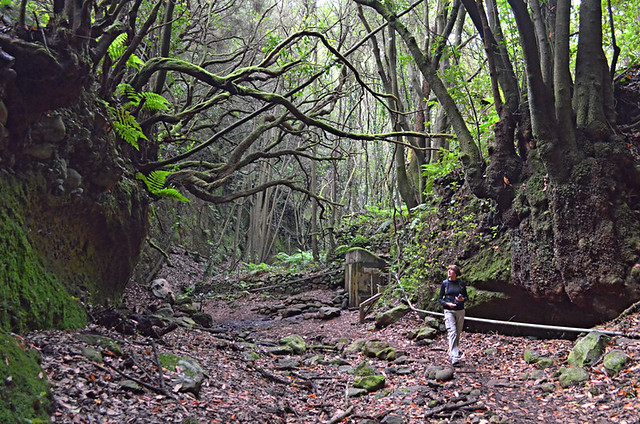 In an enchanted forest there are pixie doors in tree trunks; sorcerer’s incantations can be heard in the breeze rustling through leaves, and spindly branches reach out to tap you mischievously on the back as you pass by. 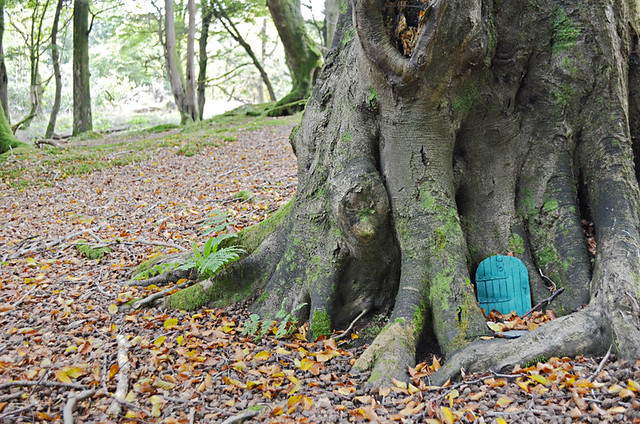 ‘Balderash’ and ‘poppycock’ you may scoff. However, when walking in the depths of a truly enchanted forest it’s easy to believe any of the above… well, it is for me.

But this isn’t just about forests; it is about enchantment and trees and the kind of magic which comes with being hypnotised by a particularly alluring tree-lined avenue. 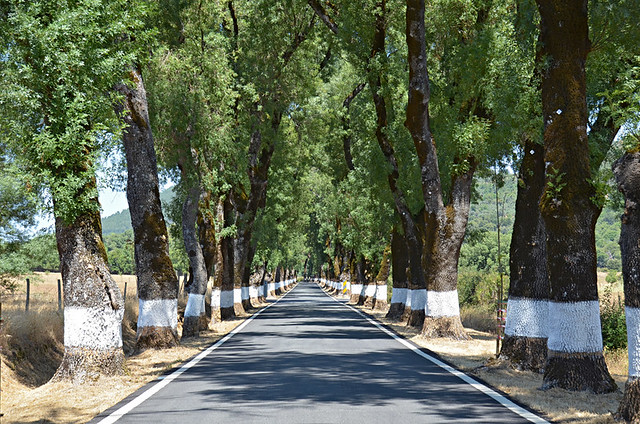 There’s a most glorious one at Portagem in Alentejo known as the estrada dos freixos cintados, and considered by some to be the most beautiful stretch of road in all Portugal. The avenue consists of a kilometre of ash trees with white bands at their bases, the freixos cintados (belted buckle). It’s a long, straight avenue which curves just before it ends (if coming from Portagem). The curve makes it look as though it’s a tree-lined avenue with no end, a road which simply leads to a different dimension.

The estrada dos freixos cintados is barely wide enough for two cars, a fact which can lead to some serious breathing in when there’s a juggernaut bearing down on you. There are passing places along its long stretch, but they’re infrequent so luck and timing has to be on your side if there’s something big coming from the opposite direction. I’ve stood in the centre of the narrow road twice to try to capture a hint of its magic, Andy keeping a watchful eye for any metal monsters heading my way. The road seduces my gaze but I don’t want to end up, like some unfortunate civet, as part of it. 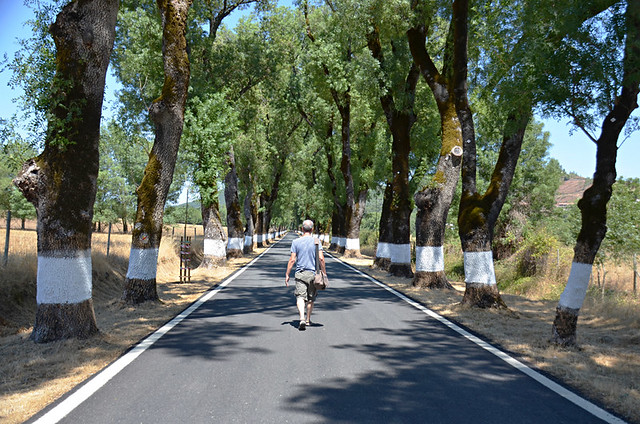 I posted a photo of estrada dos freixos cintados on facebook and a friend responded with an article about another stunner of a tree-lined avenue, the Dark Hedges of Northern Ireland, written and photographed by a couple of travel blogging amigos, the PlanetD’s Dave and Deb. The images are spellbinding, capturing perfectly why tree-lined avenues captivate us so much. 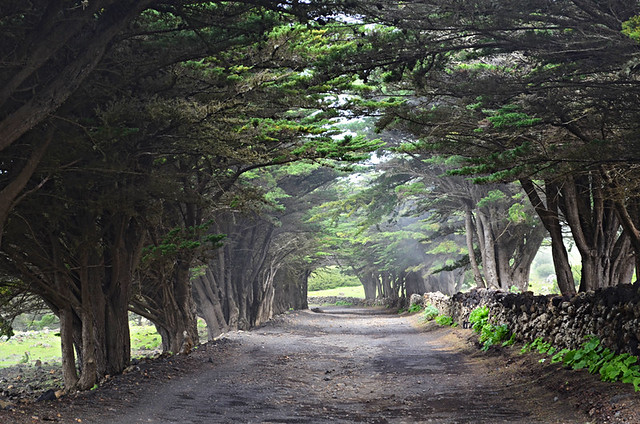 Their Dark Hedges got me thinking of other fairy tale avenues. The first that swirled mystically into my consciousness was an avenue on El Hierro. Appropriately it leads to the island’s famous sabine trees; gnarled, twisted, and beautiful freaks of nature which look as though they could be petrified witches. 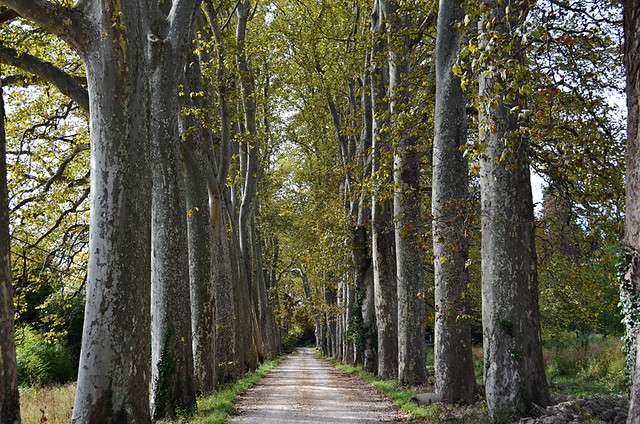 Another avenue whose branches forced their way into the cinematic screen in my mind was a line of tall, proud plane trees leading to an auberge in Provence. More romantic than magical, that avenue made me feel as though I should be journeying along it on horseback, possibly dressed as a musketeer en route to an amorous dalliance. In 21st century reality we strolled through it in sweaty hiking togs. 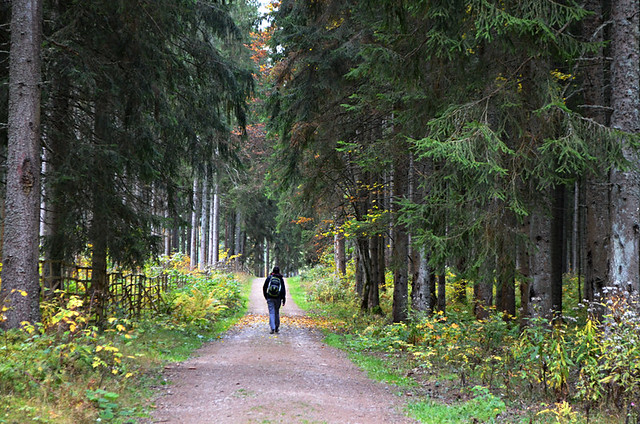 Then there is the Black Forest – atmospheric, fantastical, and occasionally as oppressive as its name suggests. The Schwarzwald is a dense immense forest where myth and magic hang heavy from the drooping branches of gargantuan pines. When you’ve been swallowed by it, the silence at its heart presses painfully against your eardrums. You can take your pick of bewitching tree-lined avenues there. 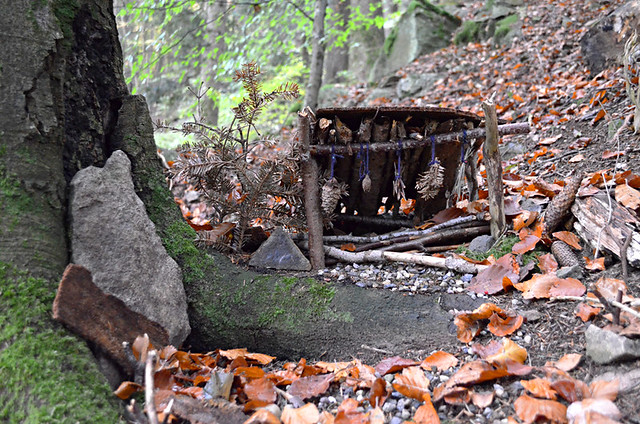 And parts of the Black Forest really are enchanting. I don’t mean that in a travel writing cliched sort of way; in the Schwarzwald there are pixie doors set into the trunks of trees.