Occasionally when we’re helping put together a Slow Travel holiday with UK specialists Inntravel we can end up with additional impromptu ‘missions’. Sometimes these can be quirky little affairs such as searching for a pig-shaped assador de chouriço in the Algarve. Another saw us escorted into a military installation in Lisbon to try to buy maps.

Our mission, tacked on at the end of a trip to Minho in northern Portugal, was relatively straightforward – to take photographs which captured the feel of the Aveiro Lagoon area for inclusion in the brochure which included a new cycling holiday in the area. The timescale, less than 24 hours, meant there wasn’t a lot of scope if anything went wrong, i.e. weather conditions. 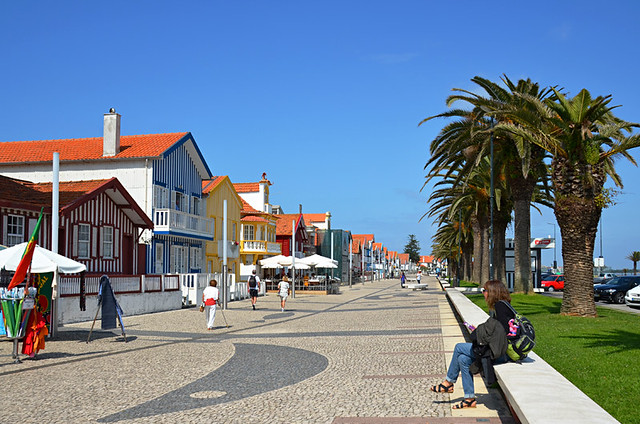 Not knowing anything at all about the area meant we were going in blind. But the 45km long Aveiro Lagoon runs alongside a strip of land so thin that at one point it’s less than 300m wide. This meant we could cover a decent amount of it in the short window of opportunity we had.

Knowing the key features of the new holiday, we concocted a plan based around a wish list of photographs.

The ‘must’ shot – Costa Nova
Looking more like a movie set than a town, Costa Nova is the sort of place you might expect to find a Portuguese version of Jim Carrey leaning on a lamppost whilst announcing loudly “B-O-N-ita”. Shots of the famous striped houses was top of my wish list although not essential as it’s a much photographed location. 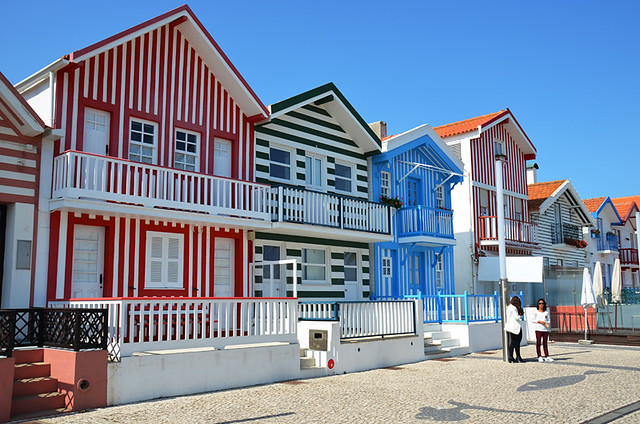 The sky was empty of clouds, perfect. But as it was already 1pm, the sun was heading further west and shadows had already spread across the perky, painted facades of the houses which face inland towards the Aveiro Lagoon. They are a sight to see – built initially in the 19th century as warehouses for fishing equipment the rising popularity of people taking beach holidays in the 20th century led to them being taken over by well to do families who tarted them up for use as summer homes.

Life on the lagoon 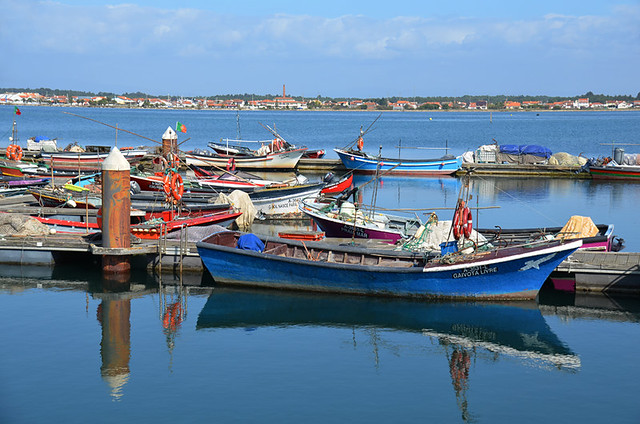 Obviously the Aveiro Lagoon would be an essential aspect of any spread about the area. Although the picturesque houses of Costa Nova are a tourist magnet (even though there weren’t actually many at all on a warm and sunny mid-September day), there’s still a richness of working local life to be found on the lagoon itself. The shallowness of the water and narrow channels leading from the main body of water meant special boats had to be designed to for fishing in various areas and for transporting the likes of seaweed (used to fertilise fields) and salt. A small harbour at one end of Costa Nova provided plenty of material. 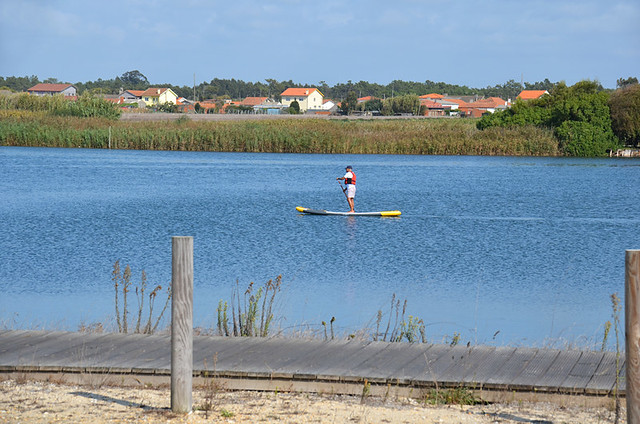 As the holiday was specifically a cycling one, it would have been useful to get a shot of people on bikes using the specially created paths which link Costa Nova and Vagueira. But that required cyclists to appear just at the right time. Some actually did, and on an attractive section of wooden walkway, but I wasn’t happy with the results. However, I did manage an ‘activity’ shot of a man gently stand up paddling on the lagoon.

Capturing the feel of the other towns part one 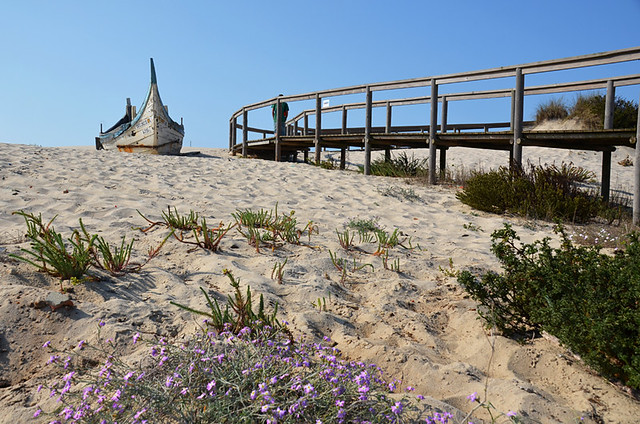 Although the lagoon continues beyond Vigueira to the south of Costa Nova we decided, given the shackles of time, to make it the point we turned back. The town itself is not in the slightest bit picturesque, but the area around the elegantly long Praia da Vagueira had loads of potential material – colourful wooden sardines; fishing nets; surfers; traditional boats on the white sand, and a long, wooden walkway which snaked along the back of the beach behind the dunes. 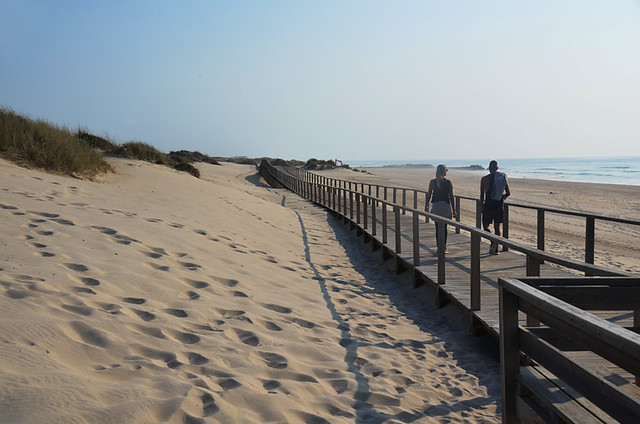 Until Aveiro port was built in the 19th century the narrow strip of land facing the Atlantic on the western side of the lagoon was just one long beach. Getting a beach photo under a cloudless sky was never going to be much of a problem, except as the afternoon stretched toward early evening a haziness entered the fray.

Capturing the feel of the other towns part two 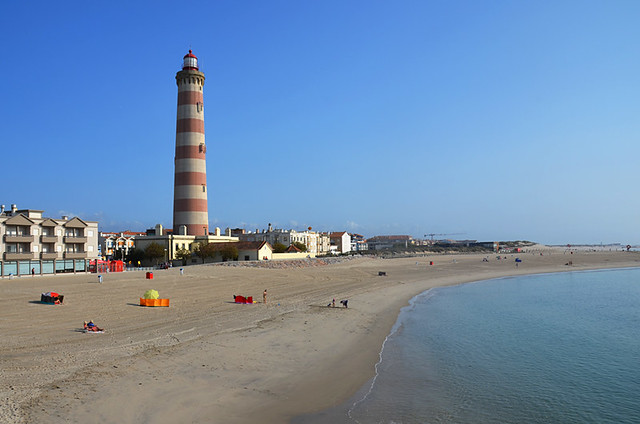 At the northern end of the strip lies Barra, another town which doesn’t rate highly in the good looks department. But it is the home of the red and white striped Faro da Barra, at 62m high it’s the tallest lighthouse in Portugal. 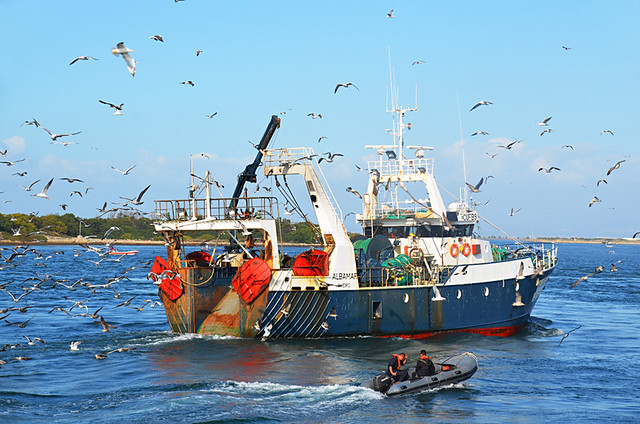 Barra lies at the entrance to the port whose construction transformed the area which meant I was able to take some bonus shots – a battalion of seagulls launching an assault on a larger fishing boat; an army of fishermen, and women, casting their lines from the sea defences. These sort of shots help illustrate the real life of a place. I snapped as many as I could as the afternoon turned, in colourful pastel shades, to dusk. 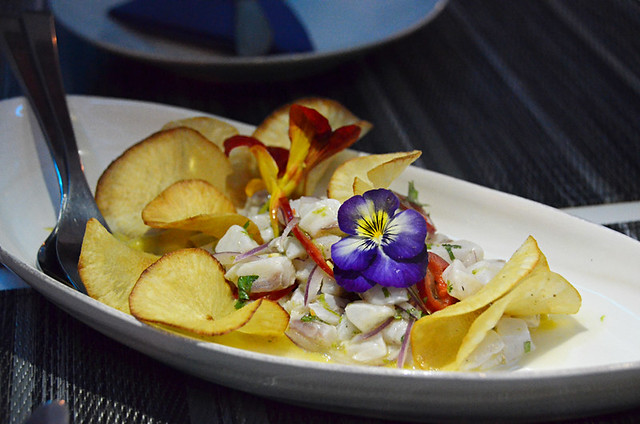 The manager of our hotel recommended a relatively new restaurant, Bronze, a modern affair set right on the beach. As it is window rich and facing west, it would be a great place to dine and drink at sunset. We were just a wee bit too late. The waitress talked me into their signature salt cod dish. I’m not a great fan of salt cod, except as bacalhau à brás, but Bronze’s was as good as the waitress had promised and highly photogenic into the bargain. The image is ceviche, but the cod shot made it into to brochure. 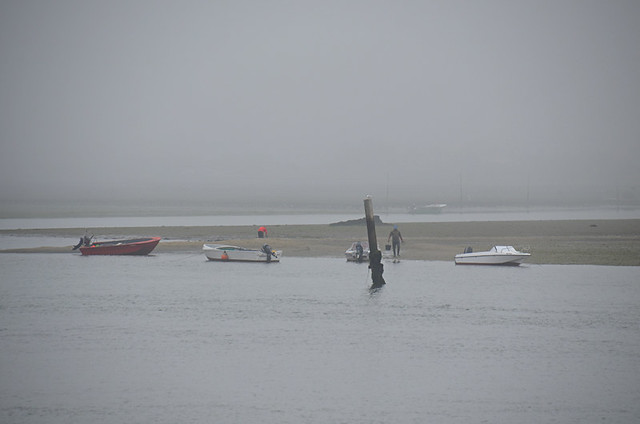 Morning broke and the world outside our hotel window in Costa Nova looked once again like it could have been a film set. But this time one adapted from a Stephen King novel – a dense sea mist lay heavily across the land… and it refused to burn off.

That was the end of that.

Disappointed but relieved we at least had been lucky the previous afternoon, we headed for home having, in reality, had only about four hours in which to capture the Aveiro Lagoon. 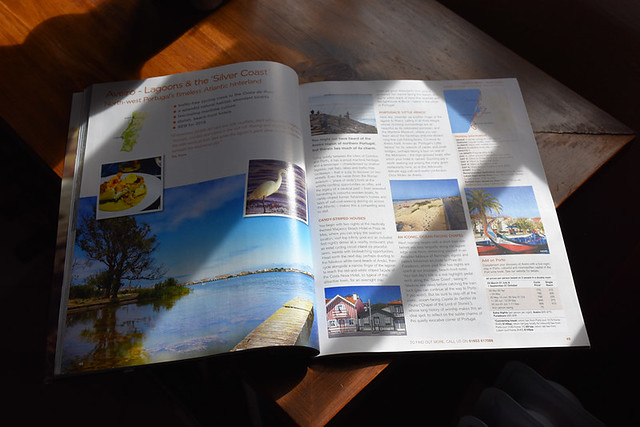 Three images made it into the Aveiro spread in the Inntravel brochure, so although the mission wasn’t an outright success, neither had it been a complete disaster.