I arrive discreetly under the cover of darkness, stay the night, and slip away as bleary morning eyes are still being rubbed, the sun is only beginning to yawn its way across across the rooftops, and the shutters on ovos moles kiosks remain as they were when I arrived – closed.

An illicit little affair. But no one night stand, not quite. 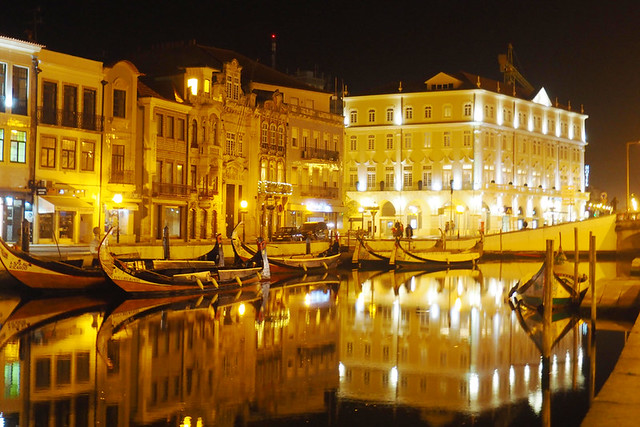 I’d enjoyed another brief dalliance – a morning fling squeezed in between other flirty Portuguese beauties. That fling was enough to show me Aveiro had the potential to be a salacious seductress.

Lounging beside a lagoon on Portugal’s north west coast, Aveiro is often referred to as the Venice of Portugal. Quite a few places with canals are referred to as ‘the Venice of… ‘. It’s a description which dangles a pretty picture on the end of a fishing hook. The reality is nowhere is the ‘Venice of’. Venice is incomparable. 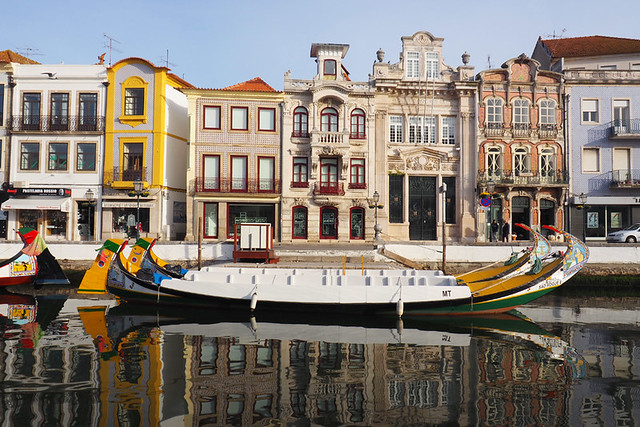 Aveiro does boast canals which are lined by historic edifices; maybe not grandiose Gothic, Byzantine and Renaissance ones like in the Venetian jewel. The jaunty Art Deco buildings which decorate its watery avenues are far more suited to Aveiro’s coquettish personality.

It also has canal boats – a flamboyant fleet of gondolas ready to whisk romantic dreamers, or selfie-obsessed snappers, on a silkily smooth cruise along liquid streets. Except, despite ‘gondolas’ being the word that dances into the head when the sleek vessels are first seen, they are not gondolas. They are barcos moliceiros; a very different animal. For a start, these long, elegant, flat-bottomed craft were originally used for harvesting and transporting moliço, a collective name for sea grasses including eelgrass, widgeonweed, and pondweed which were used as agricultural fertilizer. 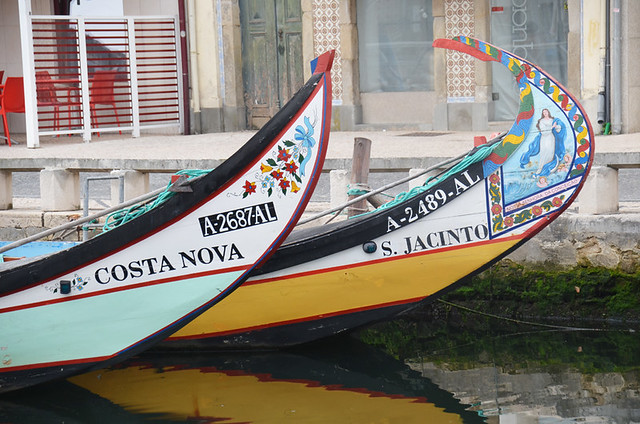 As well as having a distinctive design, it is essential each barco moliceiro is customised during its construction by the addition of original and striking art work. Different sections of the moliceiro are painted to reflect themes ranging from historical and religious, to work related and scenes from everyday life. But the theme which gets prime position and which had me, the first time I spotted one, yanking at an invisible hand brake to bring me screeching to an emergency stop, is the theme described as ‘erotic’ or ‘burlesque’. Personally, I’d call it Portugal’s version of saucy seaside postcards, circa 1960s Britain, painted on a boat. 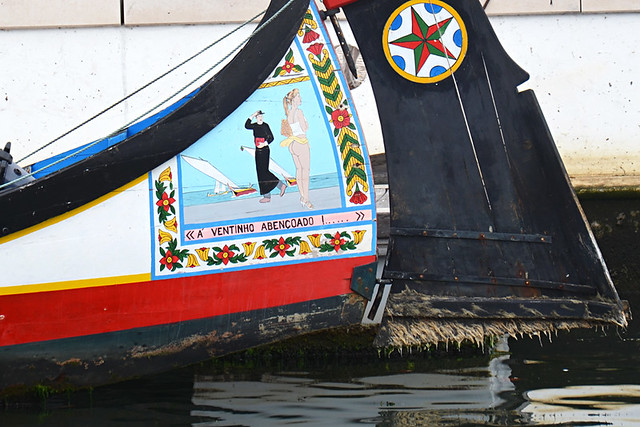 I have yet to get to the, err, bottom of why a tradition which dates back to the 19th century would include scenes such as this – a priest looking at a girl whose skirt has been lifted by the breeze, exposing her backside, exclaims “á ventinho abençoado” (the blessed wind). That’s one of the tamer ones.

Once I spotted one saucy moliceiro on a foggy morning I was intrigued to know if it was a one-off or not. The prow of the next boat, featuring a man addressing a woman who held a plate of ovos moles (a local speciality sweet) in front of her breasts, told me it was definitely an Aveiro curio. 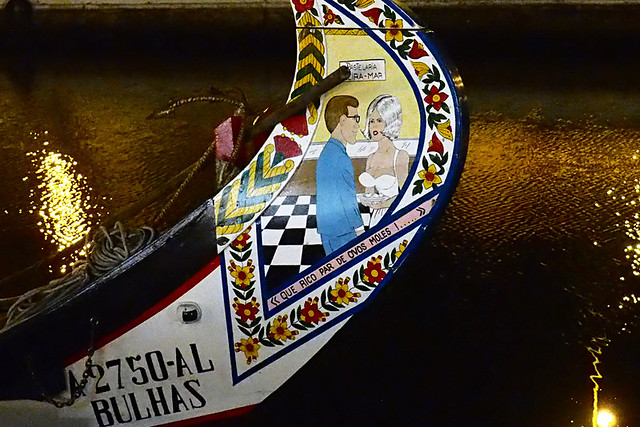 On both brief visits I scampered about the canals, a voyeuristic photographer seeking provocative prows to notch up. There was a lot of material of the sort that will amuse some, bring scowls to the faces of others.

The saucy scenes belong to another time, no question about that, and maybe some will view them as being undeserving of a place in modern society. But the fact they belong to another time is the point. They are a tradition, an integral part of the area’s past. In a way they are no different from scenes of yore on a faded tapestry, hieroglyphics on an ancient tomb, or primitive drawings on the wall of a cave. Like em or loathe em, they’re simply a part of history. I’m a great believer in not sweeping the past under a carpet, even when it’s only metaphoric specks of dust. Anyway, their continued existence helps keep the art of moliceiro building alive. 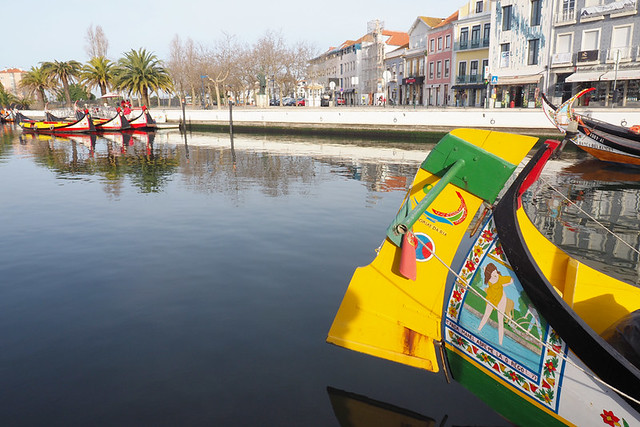 I am guilty of having allowed them to dominate my all-too-short visits to Aveiro. Show me a quirk anywhere and it will distract from all else. Aveiro is more than a town of canals sailed by boats with outdated, cheeky cartoons on them. I have seen enough to know it deserves more of an exploration.

I guess my little affair will have to continue.