The upper reaches of Lake Maggiore know no man-made boundaries. The longest of the Italian Lakes, Maggiore stretches over 64km from Piedmont and Lombardy in Italy to the foot of the Swiss Alps. 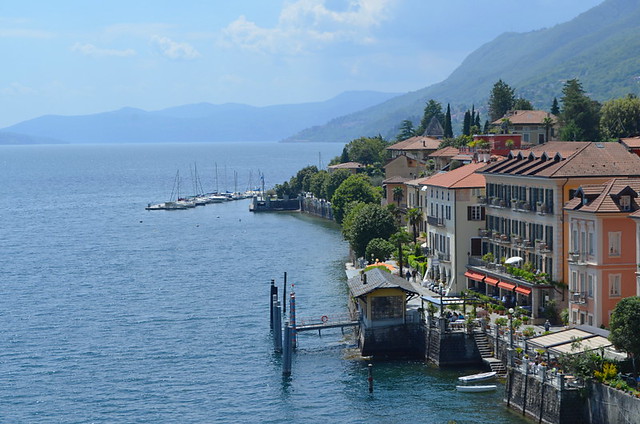 Driving along the sun-dappled coast from the Cannero Riviera, crossing the Italian/Swiss border was about as exciting as driving through a green light. A perfunctory nod from border control police and we had left Italy and entered Switzerland. Almost immediately, I noticed subtle changes in the roadside views; houses replaced Aleppo pines, gardens ceased some of their unrehearsed ballet and pavements became wider and neater. As we drove further north, I began to fear for the beauty of the lake in whose company I had spent so much time.

Had the Mediterranean spirit of its Italian meanderings been lost to the Alpine discipline of its Swiss shores?

Boarding the funicular in Locarno on the northern tip of the lake, we gradually pulled up the steep slopes of Ticino’s mountains. Like an old lady with worn out knee and hip joints, the effort of every metre of the funicular’s journey rattled through its frame as it ground inexorably up its familiar route. Changing to the cable car at Orselina, gravity no longer constrained our movement and we glided through the tree tops to alight at Cardada. Ahead I could see a chair lift that takes visitors to the end of the line at Cimetta, but our aerial travel ended here….or so I thought. 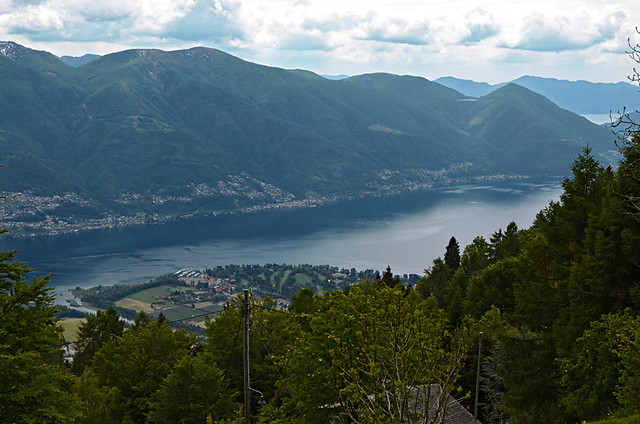 Meandering a forest trail punctuated by wooden lodges that looked as if they were waiting for some Swiss chocolate box designer to come along and photograph them, we arrive at the pretty mountain albergue of  Ristorante Colmanicchio. Taking a table on the sun drenched outside terrace and looking down over Locarno and the Brissago Islands framed by the snow-dusted splendour of the Alps, I reflected how much Lake Maggiore had changed from laid back, Mediterranean hipster into Alpine drama queen. The vain clouds that drifted above its surface stole the colour from its depths leaving the lake little choice other than to reflect their form back at them, like shifting pools of quicksilver across its surface. 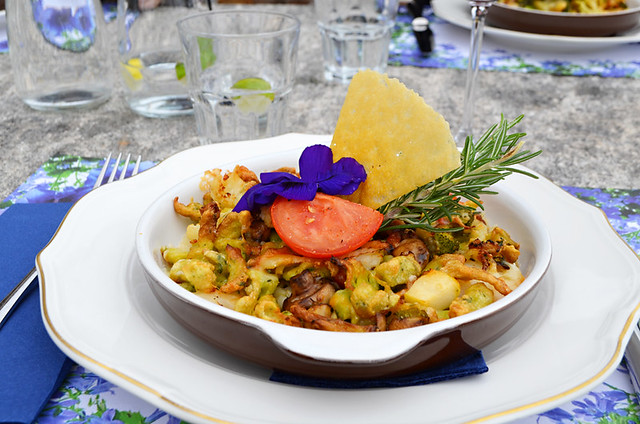 I realised that the mountain air had worked up an appetite. The table next to us had just ordered a plate of Ticino specialities and it had arrived laden with cold meats, sausages, cheeses, pâtés and salads. But I had a yen for something hot so I ordered the Spatzli, a delicious plate of home made pasta with cheese, garlic, cauliflower, cherry tomatoes and onion seasoned with fresh herbs from the garden. I could have been satisfied with that but my dining companions, Roberto and Stefania, made the mistake of letting me see the dessert menu which contained the words ‘carrot’ and ‘cake’. A glass or two of the local Merlot and the sun on my face ensured a relaxed, almost soporific state followed and I could happily have ordered more wine and spent the rest of the afternoon waxing lyrical about the beauty of Lake Maggiore. 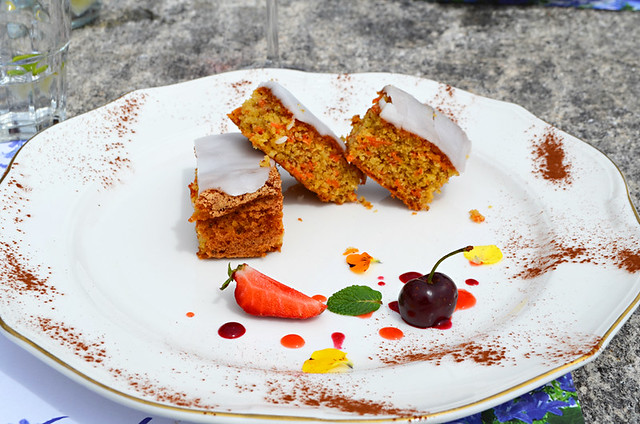 But a new challenge awaited.

I frequently boast that I managed to conquer my vertigo on a trip to Sigiriya in Sri Lanka many years ago. But as I stood above the last piece of solid ground before the silver platform stretched out into mid air at 1142 metres (3746 feet) above the Maggia delta, I wondered if I would now have to retract that claim.

The floor felt solid enough as I took my first step, trying not to directly acknowledge that the sides of the structure were open mesh, giving me confidence to take a deep breath and stride to the railing at the end. Not a vestige of vertigo, just another sharp intake of breath as I let the enormity of the panorama sink in. 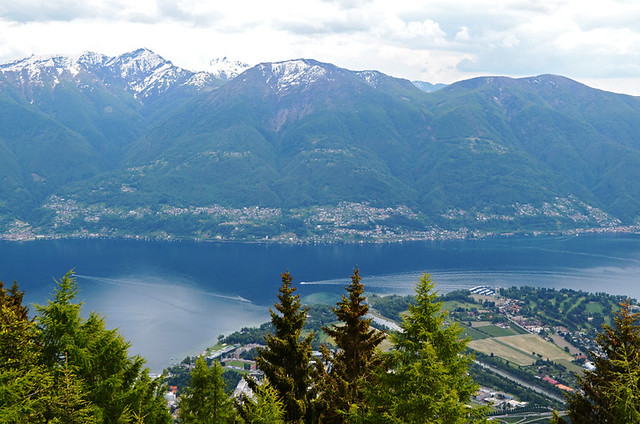 Below my feet, Lake Maggiore shimmered, tiny boats cutting the surface like a seamstress’ scissors through teal silk. To the west lay the tiny Brissago Islands beyond which, the lake continued her journey into Italy. Brushing the clouds, Switzerland’s highest points of Monte Rosa (4554 metres/14,940 ft) and Punta Dufour (4634 metres/15,203 ft) swept down to its lowest point at the Maggia basin providing a depth of landscape that travelled from icy peak to balmy shore in the blink of an eye. 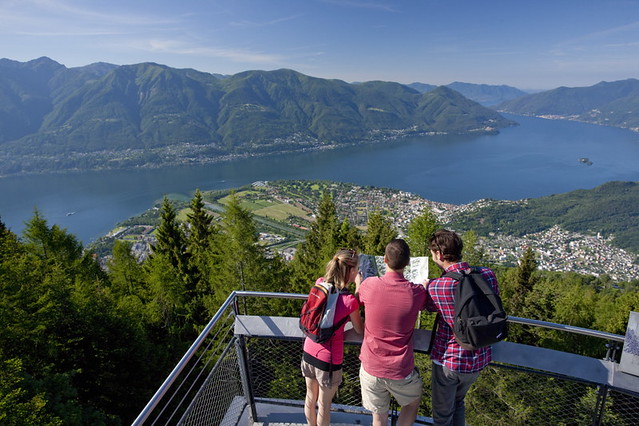 The clouds may have conspired to ruin that perfect shot ( the fabulous pic above is Ticino by Christof Sonderegger with many thanks for letting me use it) but they did nothing to diminish the drama witnessed by the naked eye.

Assured that my vertigo claim was still intact, we dragged ourselves away from the rim of the platform and caught the cable car back down to Orselina from where we made the short journey on foot to the sanctuary of the Madonna Del Sasso. 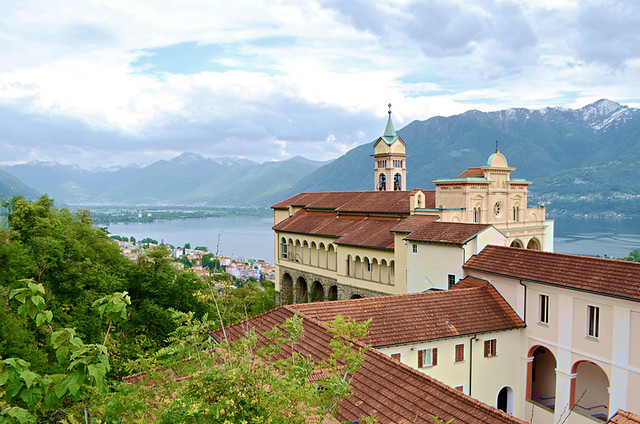 Perched on its rocky outcrop and outlined against the lake and the mountains beyond, the spire of the convent’s elegant bell tower rose above the horizon to punctuate the sky. Beneath it, the cardinal red tiles of its roof tops; lemon arches of its loggia and apricot walls of its façade, created a fairytale palette to the scene, lending it an Italian identity.

Walking its shores, strolling its gardens and exploring its islands, I had thought of Lake Maggiore as a fairly static body of water. But following the lake’s progress beyond its Italian extremities and into its Swiss home, I realised it was far more than that, Maggiore defies borders and brings a piece of Italy to Switzerland, and it’s a marriage made in landscape heaven.