I’m not surprised to discover the Hohensalzburg Fortress in Salzburg was once used as a prison. We’ve not been thrown into dungeons or anything quite as drastic as that, but we cannot find the way out. We’re trapped. No need for chains and bars here.

It’s ridiculous. This is a monster of a fortress, the largest 11th century fortress in Europe. I expect to see huge castle gates. You think we’d be able to find the way out easily. 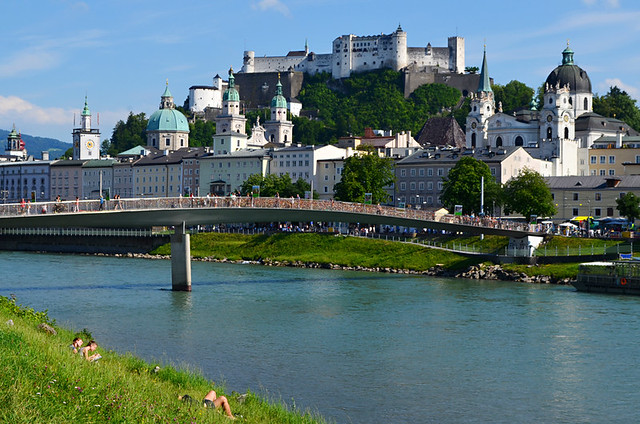 The way in was easy enough, via the funicular which has been in existence in one form or another for half a millennium. It’s an ingenious piece of machinery. In the past sturdy draught horses were used as the engine for pulling supplies up the cliff side and into the fortress, at the same time working a grain mill. It’s an ‘easy on the legs’ way to enter Hohensalzburg Fortress and the plan was to go up in the funicular and come down on foot. But, having circled the castle’s courtyards and terraces twice we’ve… well, just gone around in circles without finding an alternative way in or out.

Apparently no armies ever laid siege to Hohensalzburg Fortress. What would be the point? It looks as hard as nails and they probably wouldn’t have been able to find the way in anyway. 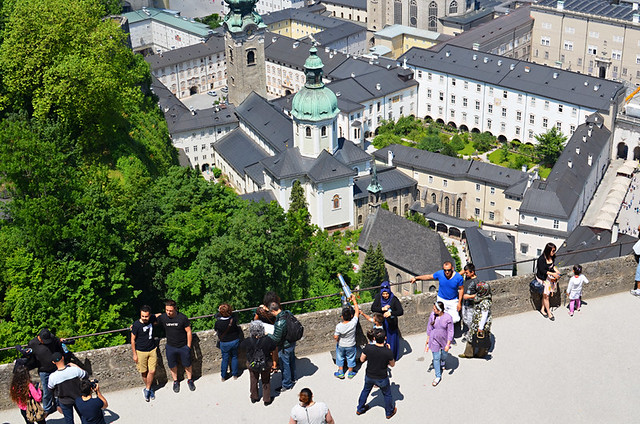 Hohensalzburg dominates the Salzburg skyline. It’s a toss up as to which part of the city offers the best views – the classic Mirabell Gardens shot, or the view from riverside.

Part of the attraction of the castle itself is the views from the ramparts with 360 degree vistas of Salzburg and surrounding area. However a visit is more than just pretty views. Hohensalzburg is quirky and we like castles with off the wall personalities. 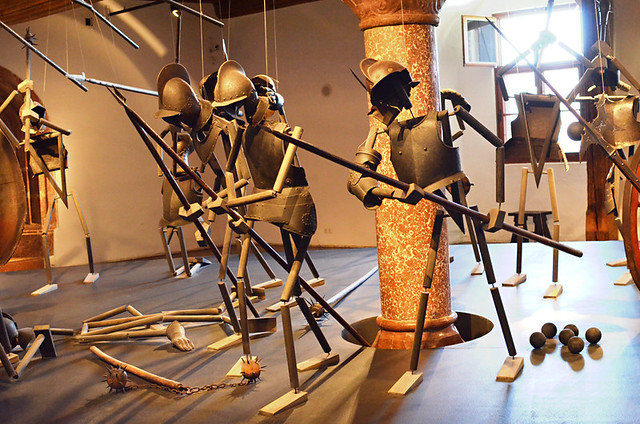 Elusive exit aside, it’s a maze of a place. We know where we want to go, we just don’t know how to get there. Part of the fun of a visit is simply to just go with the flow; wandering from terrace to grand hall to spiralling tower, seeing what we stumble across.

A war room exhibits threatening skeletal soldiers in armour that look as though they could have been designed by Ray Harryhausen. An opulent room called the golden chamber sounds as though it belongs in the pages of a Harry Potter book. 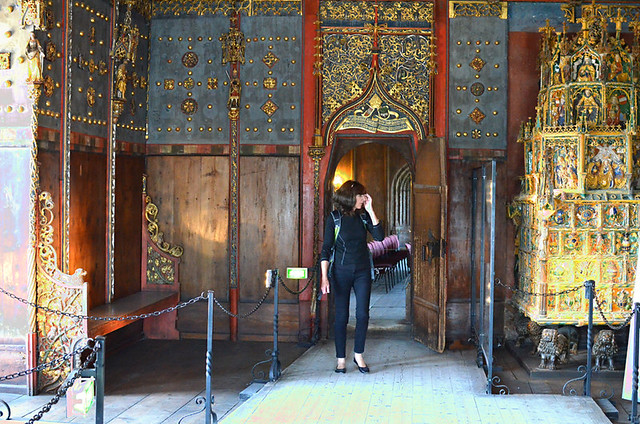 My favourite of all is the torture chamber with gruesome devices that elicit reactions that flow from involuntary grimacing to ‘I don’t even want to think how that works’. Most intriguing of all are the iron masks more akin to carnival costumes. It makes you wonder if medieval Salzburg was a bit of a surreal place to hang out, with men in pig-faced masks strolling the streets.

The exterior areas of Hohensalzburg are also interesting; some offer views over the city and the chance to pose astride a cannon (if that’s your thing), others could be tranquil squares in small towns and courtyards are ‘greened up’ by the presence of lime trees; good places to sit with ale and grub. 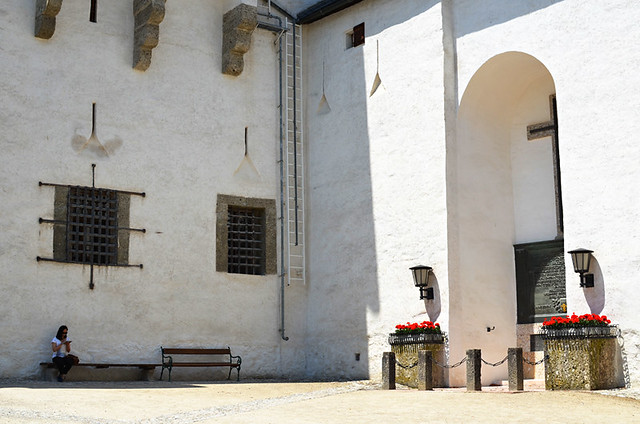 Logic dictates that any conventional entrance would be somewhere in the vicinity of the main courtyard. There are plenty of potential doors and arches but every time we try one, we end up in a chamber, on a dead end terrace, or back at the funicular.

In the end we suspect the fortress’ designers had a mischievous streak. The most unassuming door leading down narrow steps to what seems like nowhere (we’d checked it once and discarded) actually leads to a wooden ramp that winds down and out of the fortress. There’s almost a sense of relief as we reach a gate leading to the outside world, freedom… and lunch. 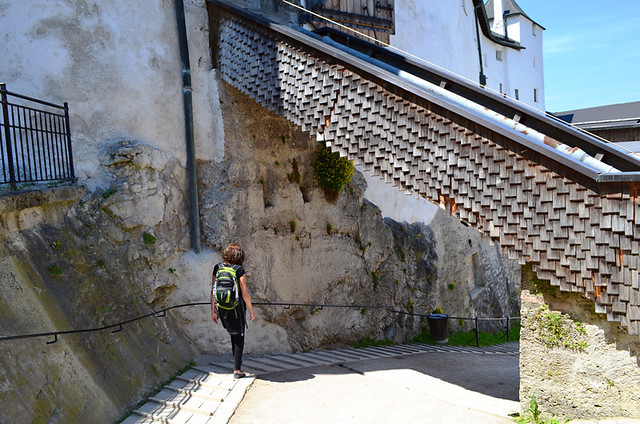 Hohensalzburg is an interesting and attractive place to while away a couple of hours and a visit should be on your ‘things to do in Salzburg’ list… as long as you’ve hatched an escape plan first.

Fact File: If you have a Salzburg Card entrance is free, otherwise it is  €11.30 for adults (includes the funicular). Hohensaltzburg opening times are 9.30am to 5pm in winter months, 9am to 7pm in summer.

I’m Not Singing to the Sound of Music in Salzburg

2015 is the 50th anniversary of the release of one of the most successful musicals of all time, The Sound of Music. The Austrian city of Salzburg is rightly proud… […]