What is it about snowfall that awakens childlike wonder in us? By ‘us’ I mean those of us for whom soft, fluffy snowflakes remain a bit of a rare beast, something to be stared at with wide eyes.

I grew up on a Scottish island where you’d expect harsh winters to bring plush carpets of the white stuff. But we were surrounded by the warm waters (relatively speaking) of the Gulf Stream which I was told from knee-high-to-a-grasshopper days were an invisible force field which often kept out the snow which had turned the lands a short distance across the water white. (Note to self: check if this actually has any truth.)

When we did get snow, it was short-lived. We watched, hoped, prayed it would settle and not immediately turn to yucky slush. If it settled we knew we had a tight window of opportunity to grab our sleds (homemade in the best comic book fashion) and take to the closest slope.
I’m dreaming of a white Christmas was a mantra we repeated over and over, hoping the more we thought it, the more it could be so.
To this day, gazing upon a snowy landscape has remained special, magical, a moment to be treasured. 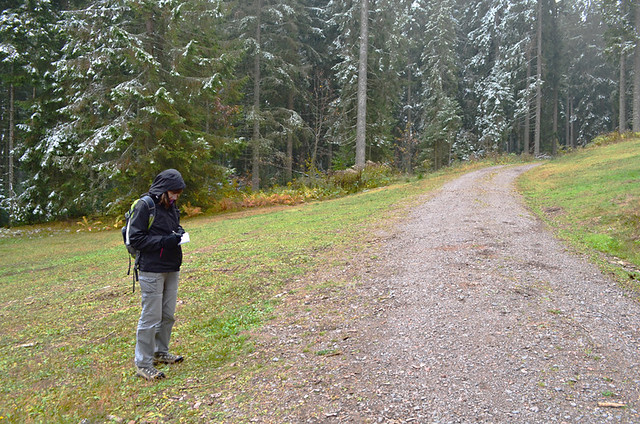 The October temperature in the Black Forest had plummeted to below average. We had the clothes for temperatures in the low teens, not for ones which didn’t have the energy to lift themselves above 0C. The purchase of a hat and gloves was enough to provide some much needed warmth, but we definitely weren’t feeling cosy as we followed the line of trees, climbing higher and higher into an even colder domain on the way to Windeck above Hinterzarten.

The first wave of a magic wand happened as we left a dry meadow to enter a dense forest of firs with much thicker coats than ours. It started to rain under the thick canopy.

It was dry in open ground, but raining inside the forest.

We stood, baffled for a moment, as thick icy droplets splatted off our hooded heads.

It had snowed high up in the forest the day before. Although we were chilled to the bone, temperatures had risen and the snow and ice which had rested overnight on the higher branches was melting so quickly it seemed like gentle rainfall.

We turned our faces skywards and wallowed in the surreal, unreal showers. 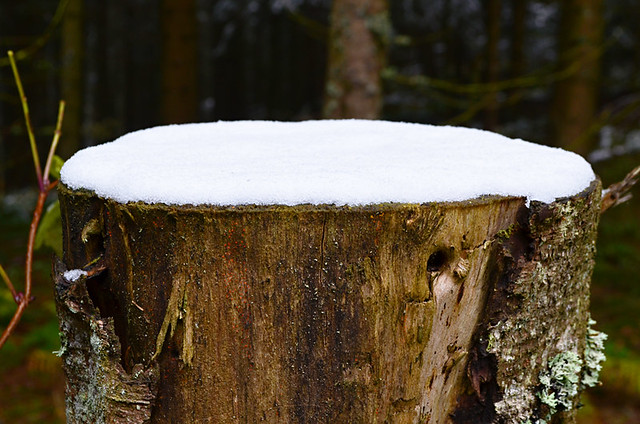 The higher we climbed, the cooler it became. Warmer temperatures hadn’t quite managed to reach the 1000m mark and soon the heavy branches were coated with frosting which became thicker and thicker as we neared the summit where a simple hut in a clearing provided shelter for when it really became cold. We ploughed on, following a path which led back into the forest and a fantastical world.

Brushing a fir tree barrier aside was like stepping through the wardrobe. One second we were in world of green meadows and tall trees with a only a light dusting of snow, the next we had stepped into the domain of an ice queen. The Black Forest had become the white forest. The snow-covered scene before us didn’t look real, it was more movie set. The temperature was pleasant, the snow didn’t chill, it crunched underfoot and lay on the trees as though placed there by an elvin interior designer. It was perfect; Christmas card perfect.

In the depths of the great Black Forest it was easy to believe we were back in a time where fairy tales didn’t seem quite so fantastical. We stood for a while, more time than we could afford, totally transfixed by nature’s enchantingly artistic touch. 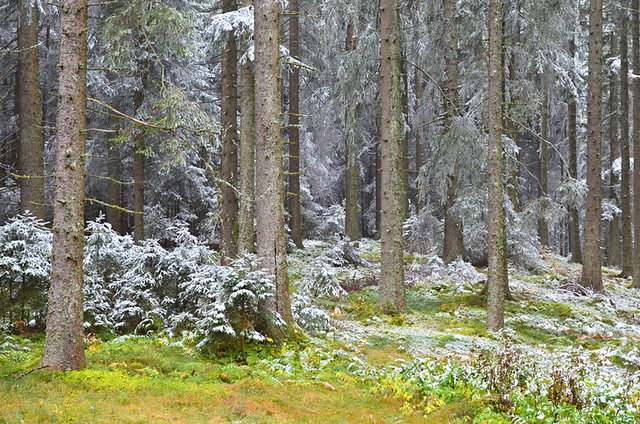 Unfortunately, unlike stepping through the wardrobe, time didn’t stand still for us. We were recording a walking route and our timings were in a danger of going west. After another twenty steps, the snow dissipated completely.
The ice queen’s domain was gone, a fleeting scene maybe but also a special little travel memory to be filed in the brain under ‘a brief return to the wonders of childhood’.

Choosing only those outlets whose products are lovingly created on the premises using traditional ingredients and methods, Ernst takes us on a walking tour, regularly stopping to sample the goods and infusing a fascinating history with anecdotal fun… […]