Where and what is Alpersbach? Google defines it as a river in Germany. We know it as an oasis in the depths of a dense forest – a scenic valley in the heart of the Schwarzwald (Black Forest).

We only spent three nights in Alpersbach, but by the time we left that valley we knew its curves like we knew an old friend. Having explored trails south, west, north and east, we were familiar with nearly every footpath in and out of it. 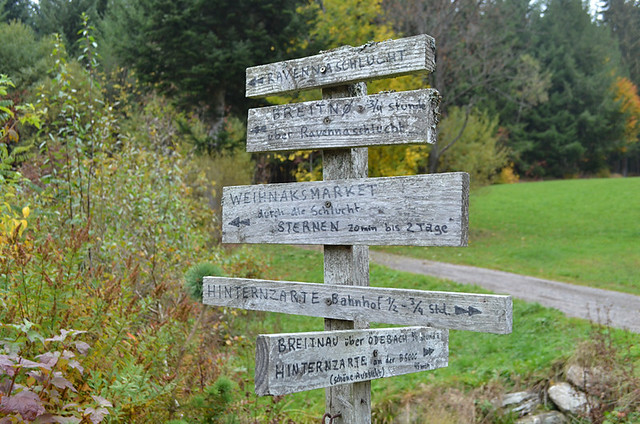 Arrival in Alpersbach
“Hello, I’m Jack. Do you have a hacksaw?”
Confessing to Herr Fehrenbach I’d thrown the padlock key inside the suitcase seconds before I snapped the padlock shut wasn’t an ideal greeting nor the best way to establish credibility as a savvy traveller. Additionally, holding the tiny padlock steady as one of the staff at Waldhotel Fehrenbach sawed furiously increased the likelihood I’d leave the valley with fewer digits than I’d arrived. But his aim was true and within a few sweaty minutes we had access to our clothes again. 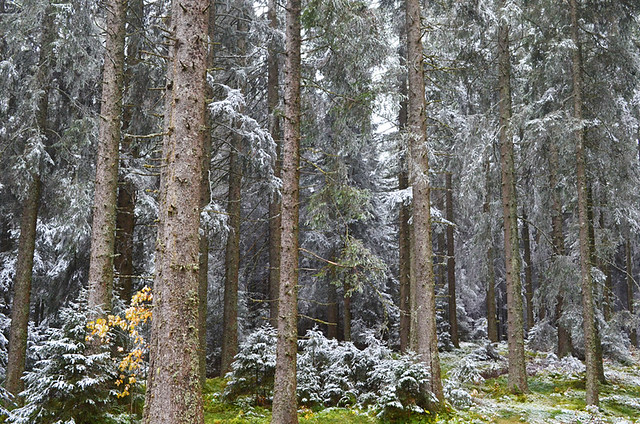 Our route into Alpersbach from the south east featured many of the hallmarks of a fantastical quest, starting with a wooden signpost draped with lichen had kilometre-long names we couldn’t translate and which might have read ‘this way to the fairy-tale kingdom.’ It was everything my imagination had hoped for from the Black Forest – neat stacks of cut logs, bushy forest, tiny wooden churches (built for axe-wielding dwarfs perhaps), glassy millponds. Our final approach involved climbing through firs, whose tops had been sprinkled with castor sugar, into a frosty ice queen’s magical realm before we finally descended to sunny, snow-free pastures. 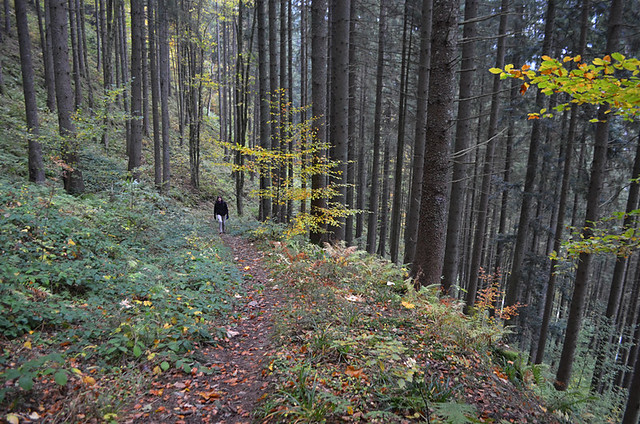 To the south west
The tower where Feldberg peak curves earthwards again is known for having 360 degree panoramic views across the valleys, forests and ragged mountains. In winter it buzzes with skiers, zipping across voluptuous snowy curves. Out of season it was deserted, maybe partly because a cool fog lay heavily on the shoulders of the land. But the grey clouds had if not a silver lining, at least an autumnal-coloured one. Our return route from the misty summit took us to the edge of a lake where nature was holding a vibrant waterside fashion show. Trees the colour of orange peel, Dijon mustard, olives, and ripe tomatoes preened at the water’s edge, admiring themselves in the glassy surface. Glorious treasures await those who venture deep into the forest. 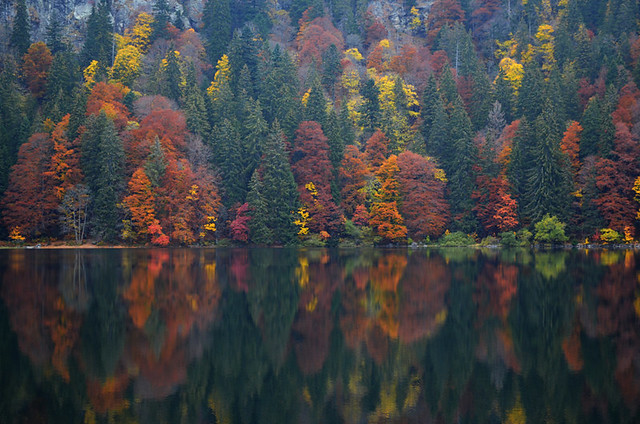 To the north east
A descent into a forest of firs, pines, beech, oaks, maples, alders, ash and walnut trees led us to a deep scar in the mountains used for centuries as a way to cut through an impenetrable landscape. Occasionally we passed small mountains of cut logs. 12 million cubic meters of wood are cut each year. But this is environmentally friendly Germany, more wood grows in a year than is cut. 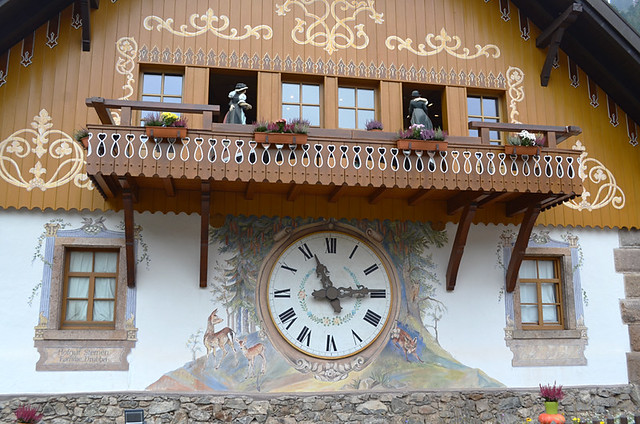 At Höllental we encountered a rarity – lots of other visitors. The draw was a collection of workshops, including a cuckoo clock maker. Most had arrived by coach and typically didn’t stray far, leaving us alone again as we continued on the next part of our journey through the Ravena Gorge. In this partially tamed wilderness, the water which tumbles energetically through the ravine once gave life to the small watermills which still line the animated stream. Our halfway mark was the town of Hinterzarten where we were briefly enthralled by a choir practising Christmas carols before the lure of coffee and kirschtorte (Black Forest gateau) broke the spell. 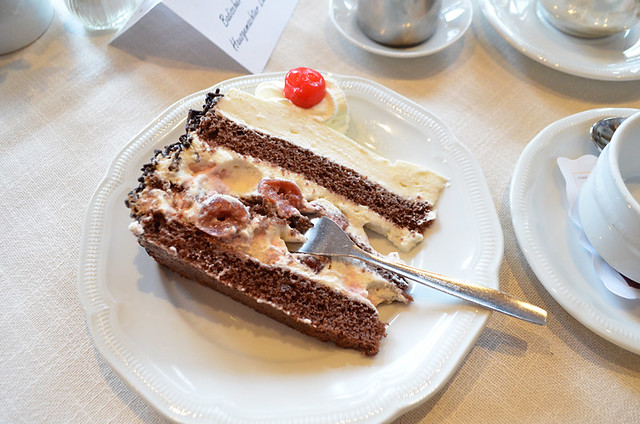 Departure
On a sunny morning we bade our farewells and set off in the one direction we hadn’t yet explored, the north west. The country road took us up and across the valley, passing lone wooden chalets with steeply sloping roofs and window boxes full of geraniums, dozy ducks and a haughty heron pretending to be a statue. Just before we were swallowed by the forest which enclosed the sunny plateau, we paused at the head of the valley for a final look back over the soft emerald curves where a light, early morning mist sprinkled dew drops on grassy stems. 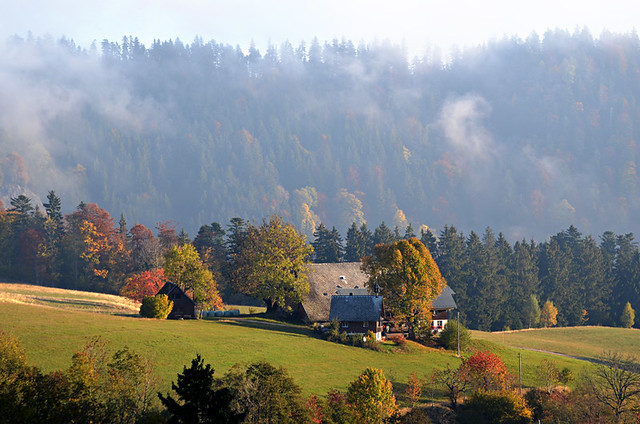 A few days previous we’d emerged from the forest debating whether we were in the right location. By the time we moved on to our next destination we knew which path led to a copse where there were intriguing little Elven doors in the base of trees; which route wound around a wooden mill to curve beyond a tree whose leaves looked as though they’d been touched by Midas; and where there was a rustic little museum with a carved balcony from which hanging flowers seem so intent on touching the ground they could have been woven on Rumpelstiltskin’s spinning wheel. 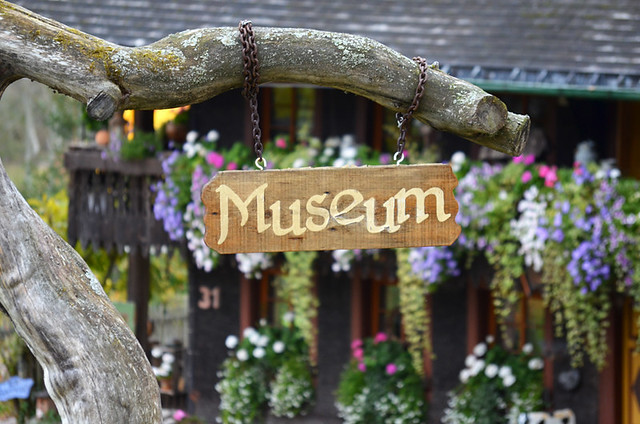 Maybe that seems a tad fantastical… to those who have never walked in the Schwarzwald. The Black Forest still feels like a place of fables and fawns and where woodcutters rescue scarlet-cloaked girls from the jaws of cunning predators.