The prow of the Fugitiva points unfalteringly towards a V between snow-heavy mountains on the horizon. Having left the calm expanse of the harbour in Caleta Tortel, myriad fjords and estuaries converge into the open sea creating a steady wake which the little boat rides, her cabin rising and falling methodically. 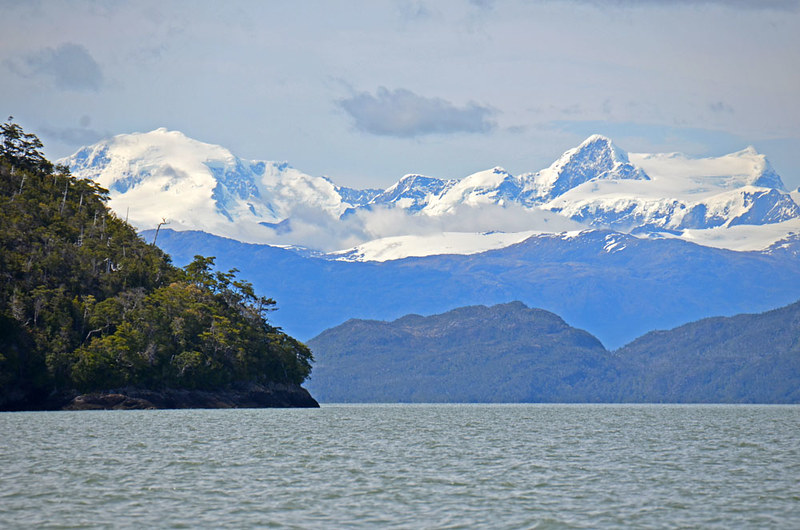 Thin, white, clouds scud across the mountain tops propelled by an icy breeze that raises spirals of snow, swirling like smoke signals, from the peaks. Above us, the sun is constant and the sky remains resolutely electric blue but the breeze stings our eyes and burns our ears. Layered like a parcel in a party game, only the bridge of my nose and my sunglasses open to the elements, I’m on the comfortable side of warm as I sit on one of the two benches, watching a steady stream of islands come and go while our destination remains steadfastly distant. 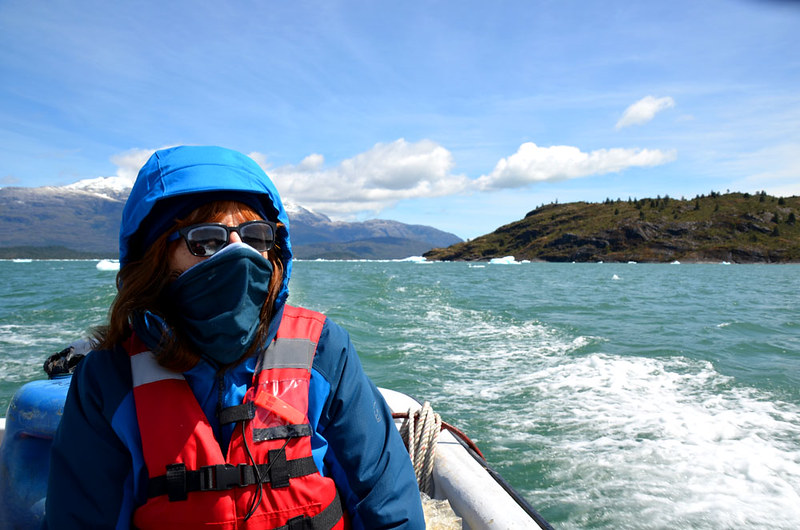 Next to me, an Argentinian couple have a large blanket wrapped across their knees. Opposite them, huddled on the floor of the boat in between the feet of her husband in an attempt to escape the full blast of the breeze, one of their companions holds her face to the sun, a smile resting contentedly on her lips. Crouched in the cabin, Max, one of our two man crew, methodically pours hot water from a kettle on a camping stove into a gourd-like bowl of mate and drinks it through a metal straw before re-filling it and passing it to Richard at the wheel. For more than an hour, the gourd is passed rhythmically between the two men until finally, the kettle runs dry. 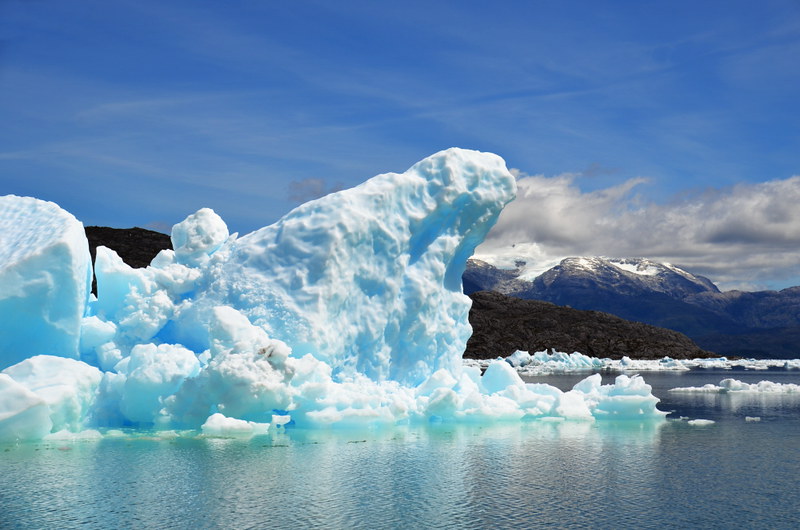 Almost two hours into our voyage, I notice what looks like an iceberg floating off the starboard bow in the distance. Soon another one sails into view, and another. Before long, the sea has become more iceberg than open water, a floating gallery of fantastical shapes; a dragon with one paw on its prey, its underbelly luminescent turquoise; a giant snail basking in the sun; the badge of the Starship Enterprise pointing heavenward, glistening in the sunlight. Conspicuous amongst the frozen phantasms, in the distance the sleek head of a seal rises briefly above the waterline, spots us, and disappears again beneath the waves.

The engine cuts to a stuttered cough as we navigate gingerly between the ice, then clears its throat back to a noisy hum as we sail across open patches of water. Ahead of us, the V on the horizon has crystallised into a vast glacier, stretching into infinity beyond our vision, its blinding white bulk glittering in the sunshine, its mouth tinged cyan where it meets the fjord and the mile-wide flotilla of ice islands it has spawned. 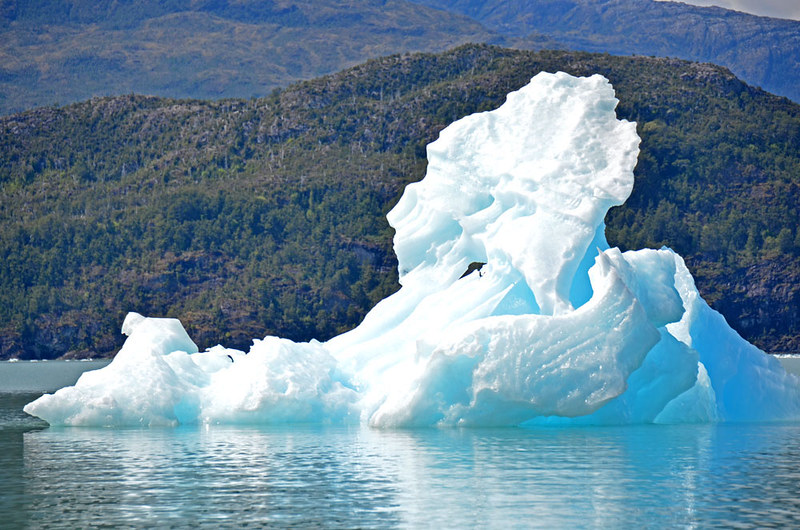 Closer and closer we sail until, like a silent army, the ice bars our path from reaching Jorge Montt. Slowly, we inch our way towards the shoreline of an island and moor up alongside its rocky shore. Disembarking, we climb the craggy hillside, our boots crunching across the frozen ground, and cross its summit to look down on the glacier. 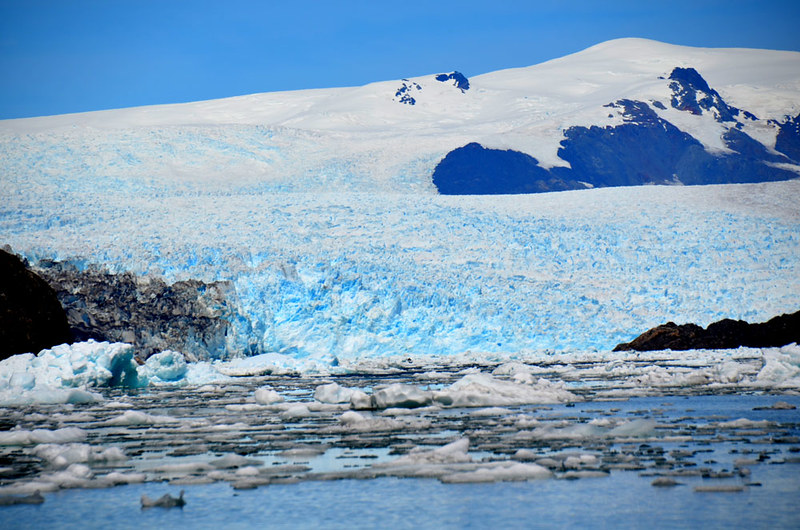 Here we stand, between the northern and southern Patagonian ice fields, on top of hill on a small, uninhabited island amidst thousands of other small, uninhabited islands. Far below us, the mighty Jorge Montt glacier stretches towards the distant, white mountains, and all around us, a frozen sea expands beneath a cloudless sky. We stand in silent awe, alone, the only sound the lapping of water beneath floating ice and the occasional splash as a piece breaks off and the remainder rolls in mourning.

The world is blue and white. Crisp. Stark. Glistening. Beautiful.

We return to the boat where we warm our hands around mugs of coffee and eat dry rolls with cheese. As we cast off from the rocks and begin to drift, Max reaches over the side of the boat and hauls a block of ice the size of a small terrier into a bucket several sizes too small for it so it perches atop like an ice cream cone without the cream. Using a screwdriver, he begins to chip away at the ice, dropping pieces into a waiting tray of glasses and the freshly washed, perspex mugs we’ve been drinking coffee out of. When every glass and mug contains enough ice, he opens a bottle of White Horse whisky and pours generous measures into each. 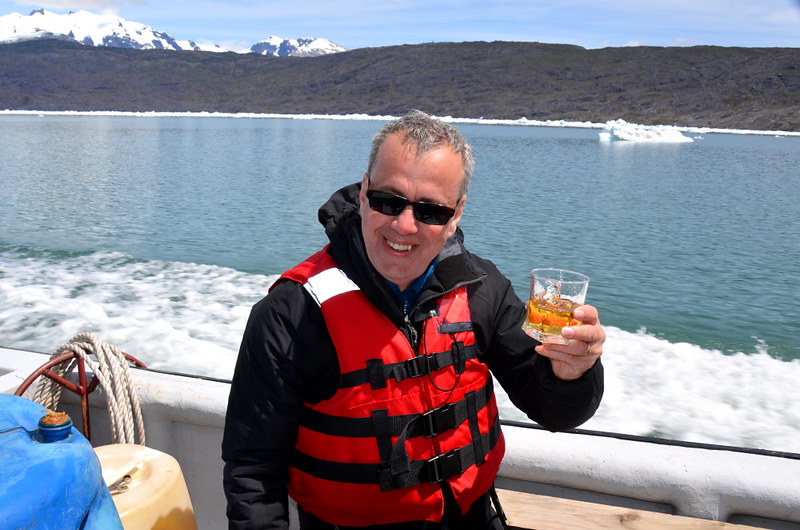 We clink our glasses, “To Jorge Montt,” we say, and the golden liquor slips down my throat, in a glowing, glacial melt.

We visited Jorge Montt as part of a discovery tour of the Aysén region of Chile, self driving the Carretera Austral. We booked our trip through South American specialists, Pura Aventura.