There it is at last, benignly watching over the hidden valley.

Despite the gender neutral title (the apartment owner informed us it was an ‘it’ after Liam referred to the mountain as a ‘she’) the lone peak of the Matterhorn looks like a wise old man sitting hunched up, a blanket covering his lower face. Well it does to me in the dim, dawn light before an infusion of black coffee has barged into the bedrooms of my senses yelling at them to get their lazy arses out of bed. 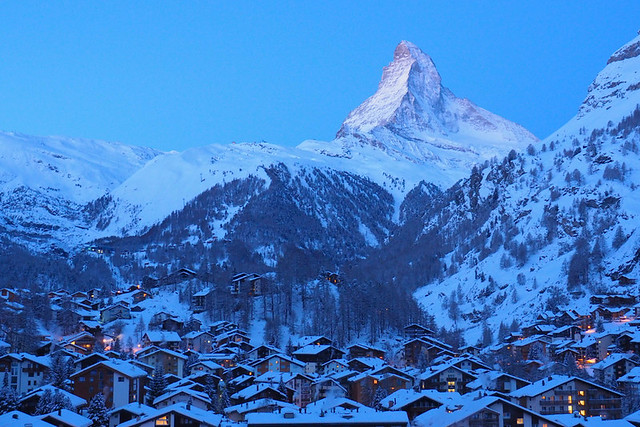 Inside the apartment it’s bug in a rug cosy. Outside, on our wide viewing platform (aka the balcony), it is -12C. There is such a contrast that wispy steam vapours rise from Liam’s shoulders when he swaps inside for out.

It is a carefully planned logistical exercise to get four people fed, watered, dressed and ready to leave the apartment to head to the Gornergrat Bahn in time to catch the red train which will transport us to a higher plane. There is actually a regular flow of trains, but a quasi-artificial deadline has been created to prevent potential procrastinators from, well, dicking about. 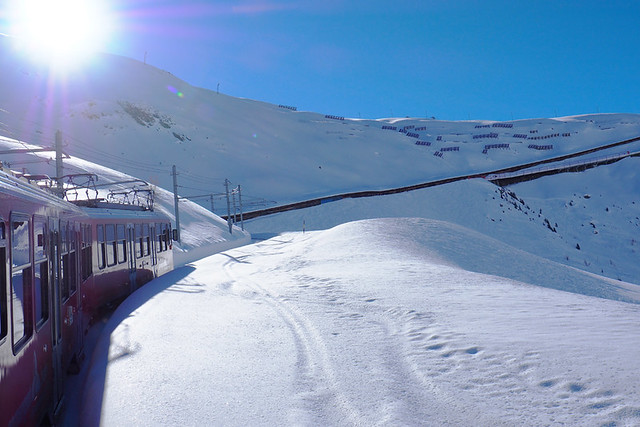 Being in the company of someone who knows Zermatt (our nephew Liam), and the workings of the cogs which keep things moving along with impressive efficiency, makes life easy for us. We know in advance that train/cable car/funicular tickets kept in a left breast jacket pocket causes barriers to magically swing open. We know where to sit for the most knockout views on a journey where every seat rewards with heavy punchers. It’s a rare treat for us to not have to concern ourselves with planning.

The snaking journey from the shadowy valley floor (1620m) to the silver domes of a hotel and the highest shopping mall in Europe at Gornergrat (3089m) takes 33 minutes and is like pulling back the duvet to let the sun slowly spread across your face. The Alpine peaks encircling us are draped in a fresh coating of puffy, powdery, blinding white snow. It is glorious. 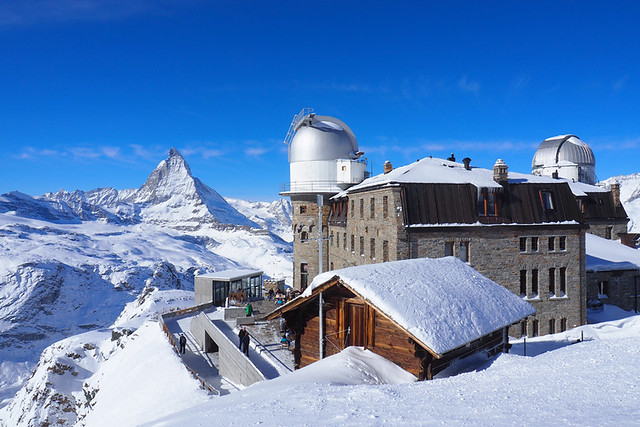 Gornergrat itself is a Bond villain’s lair of a place. From the viewing platform it’s possible to see 29 Alpine peaks which climb more than 4000m into the blue troposphere. It’s busy, but not overcrowded. There are the now ubiquitous selfie-takers hogging the best spots, adding splashes of colour to the expanse of glinting whiteness. The air is pure and thin, but as we’re used to walking at over 2400m it doesn’t take long to adjust to nature being Scrooge-like with the oxygen. A neat touch is the 360 degree telescopes which, when you point them at a peak, magically paste the name and height of the mountain framed in their viewfinder screens.

Gornergrat is only our temporary acclimatisation station. Our real start point lies a train-stop down the mountain at Rotenboden (2815m). The return ticket (CHF38 with a half-fare travel pass) allows us to hop on and off the electric cog train at will all day. 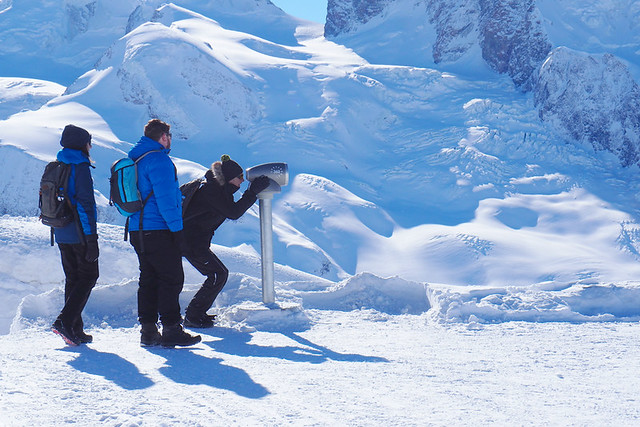 Rotenboden is little more than a hut, far fewer people alight here. Liam tells us it’s an easy walk to and from our lunch objective, the Igloo Village. He also mentions the snow might be waist deep, yet is easy to walk through – “like walking through powder”. A claim I’m sceptical about. The path is well marked and whilst the snow bordering it is waist deep in parts, the path itself has been smoothed down. It’s firm, yet soft – easy walking for our new snow hiking boots. Easier on the feet than a snow-less mountain path in some ways. But as we set off on a descent which starts off as relatively steep before rapidly graduating to steep, a worrying thought occurs.

“Are we returning by this route?”

“Yes,” Liam replies, adding. “It’s not as dramatic as it looks. The path winds down gradually.”

“Hmm,” ahead the path falls sharply away in front of us. Good fun going down, but coming up will be a completely different prospect. “I don’t know about that. Let’s hope there’s an alternative.” 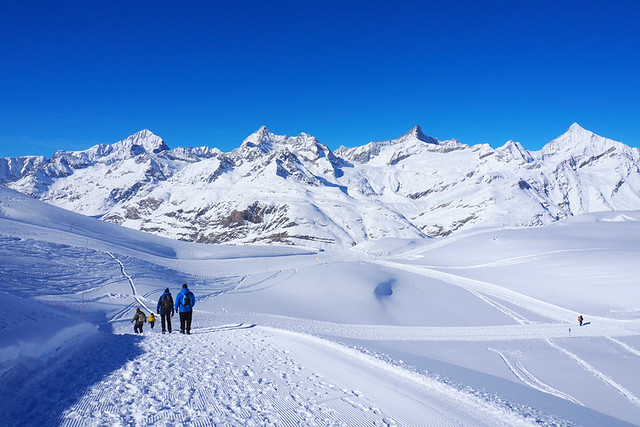 It’s only a fifteen minute walk to the Igloo Village, looking like Ice Station Zebra way below us. What it lacks in distance, it makes up for in quality. Crunching our way down crisp slopes in this pristine, alien (to me) landscape prods different emotions than the hill-walking I’m more familiar with. Most people ski here, few walk at this time of year, subsequently there’s more of a sense of adventuring. In my head I’m Shackleton, Scott, Amundsen. At one point Liam ‘sleds’ down a part of the path on his stomach, illustrating why I wasn’t keen for us to tackle the return trip uphill.

The Igloo Village consists of a handful of designer igloos and a couple of huts. Tables are wooden boxes, chairs are made from tree stumps. Outside one hut a girl stirs a steaming fondue whilst music blasts from inside a barrel. A trio of people snow-bathe on a rug spread across a snowdrift. It manages to feel both makeshift and sophisticated at the same time. With the Matterhorn adding gravitas, it is an exceptional and unusual lunch spot; one which pole vaults its way into being one of my favourite lunch venues to date. 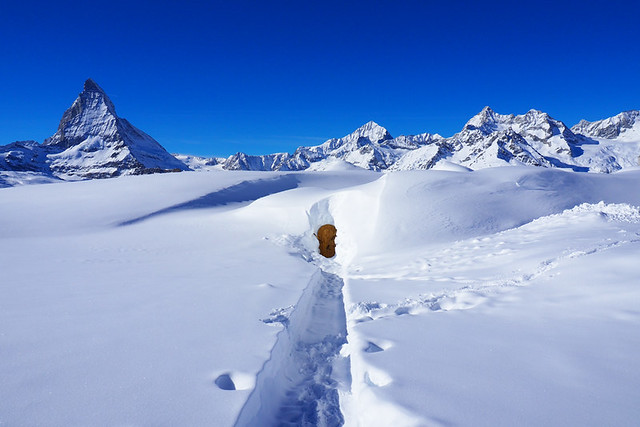 We take our time, basking in this special setting for as long as possible, especially as the barmaid has allayed any concerns about having to climb our way back to Rotenboden. The path continues to Riffelberg, a leisurely 40 minute walk/slide down the snowy slopes.

The sun is warming on the face, the air temperature chilling; I feel like a human baked Alaska. 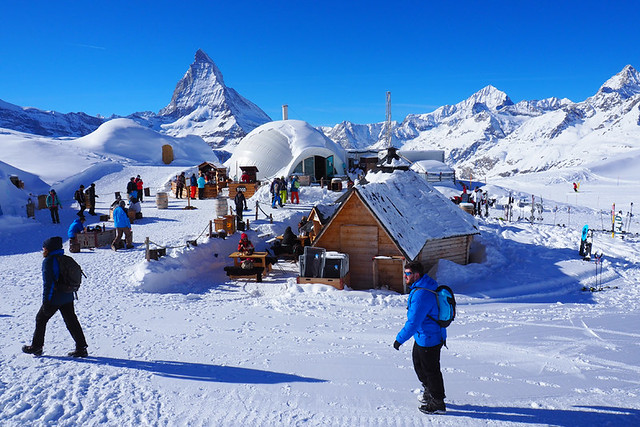 “And when we get there we’ll catch the train back and then toboggan downhill to Riffelberg,” I tune into Liam’s words from what had been a dreamlike reverie. “I crashed the last time I did it.”

Apparently the day’s adventuring is far from being over.