Sitting in a riverside bar in Ljubljana and the movie Logan’s Run pops into my head; I instinctively close my fist around what would be a black-for-an-aeon palm flower embedded into my hand. Ljubljana is a young city, possibly the youngest-feeling city we’ve visited. Young and vibrant. Young, lively, and with a vibe which is instantly appealing. I could easily spend a lot of time here… as long as I wasn’t hunted down by a Sandman. 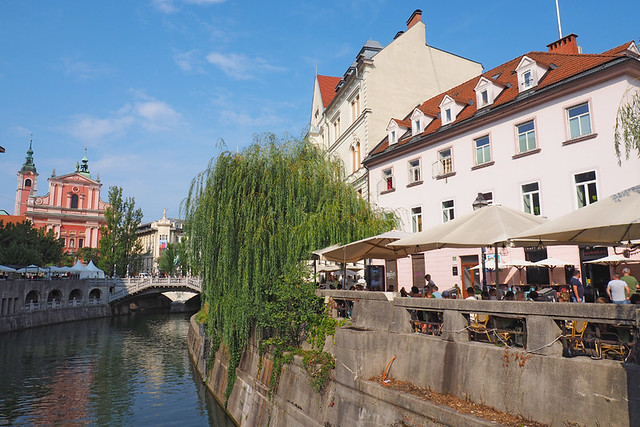 Slovenia’s capital is also a small city. The jewel at its centre, the Old Town, bijou enough to be easily explored in a day… if all you did was walk without stopping. But therein lies the rub, it’s impossible not to hit the pause button at regular intervals. One day isn’t nearly enough to sate the appetite. There is much to do, see, eat, and drink. It is a delightfully distracting place, still not exasperated and overrun by other people like me – tourists. The local personality dominates, so there’s no real need to go ‘off the beaten track’ in a city which feels like it’s bubbling away happily well below the overtourism radar. There’s really no need to go on a tour of Communist architecture (basically ugly, 1970/80s inner city housing estate type buildings) as I saw suggested by one article. That’s just travel perversity when there’s amenably attractive historic streets in which to spend precious time. 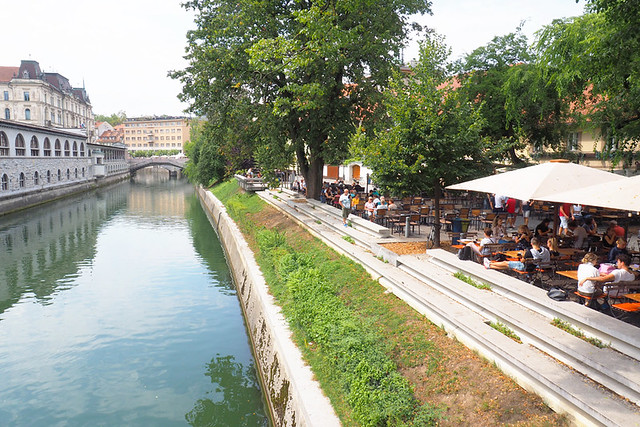 Ljubljanica – the river trip
The Ljubljanica River runs through the heart of the Old Town, subsequently the focus is often on the water which dissects it, and also the bridges, each with a distinctive personality, which connect the two halves. We hop on a tourist barge at Butchers’ Bridge (€10pp for an hour’s cruise). There are only a handful of other passengers, all of whom sit in the hot sunshine on the small deck. After pounding pavements all day long, we take refuge in the shade of the interior. With huge glass-less windows, the views are much the same anyway. 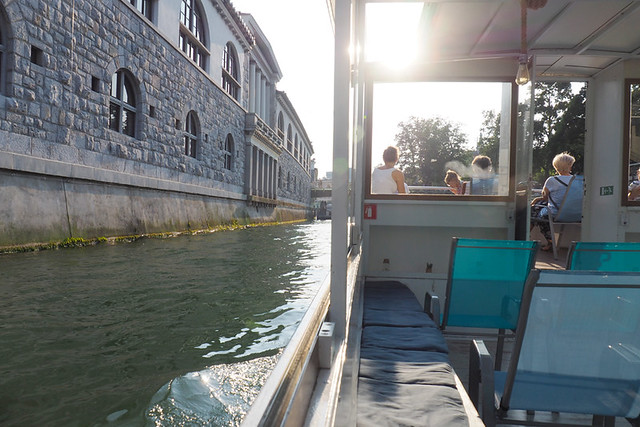 The boat chugs along leisurely, giving a different perspective of the city. It’s not a textbook picturesque historic centre but it’s pretty enough. Neat, angular town houses, softened by the rows of weeping willows which front them, are pleasing to the eye. As we head downriver, passing riverside cafes, bars, and restaurants, we notch up bridges we’ve already walked over numerous times. Butchers’ Bridge is so named because it sits beside the old market. Weighing it down are padlocks and odd little sculptures which depict chunks of things you might find on a butcher’s slab. Just upriver is Dragon Bridge; dragons are a thing in Ljubljana thanks to Jason of Argonauts fame. He slayed one who lived in a nearby lake… so the story goes. The Triple Bridge is as it sounds, three separate spokes lined with stone balustrades, whilst the rather elegant Cobbler’s Bridge was once populated by shoemakers’ booths. The most surprising bridge lies on the outskirts of town, just beyond the long stepped bank on which locals lounge, reading books picked from mini wooden cabinets – a bookswap presumably. It’s not so much the bridge which surprises but what’s happening directly underneath where a dive of a bar is set into the bridge’s stanchions. In front of the bar a mob of youths in trackie bottoms and baggy t-shirts are… well… line dancing. Dancing in the street is another Ljubljana thing. 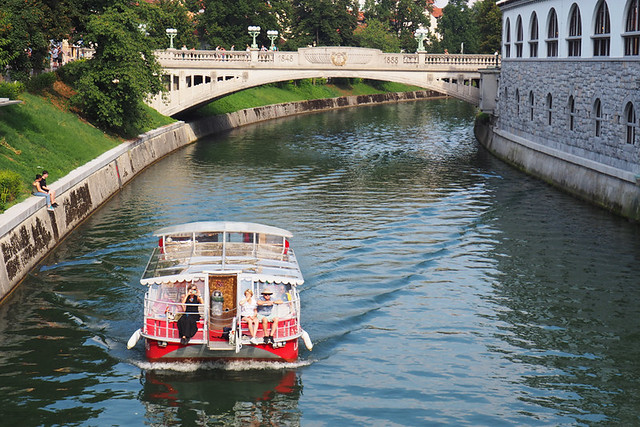 Eat, drink and be merry
There are destinations where we’ve walked and walked, trying to find an inviting cafe for a light snack or a drink in sigh-inducing surroundings. In Ljubljana there’s one every few steps; the big test here is in choosing which to frequent. 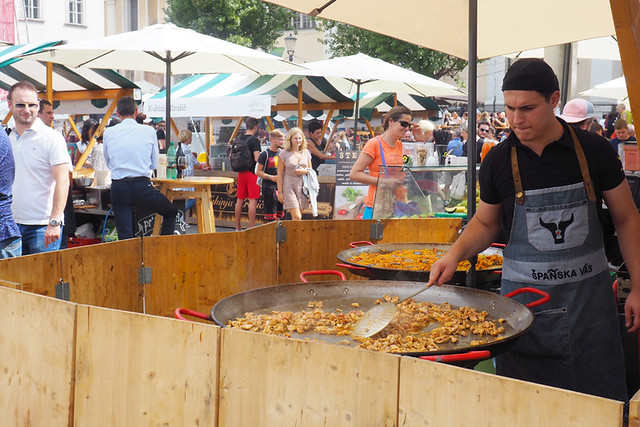 Snack central is to be found at the Odprta Kuhna (open kitchen) food market which takes place at Pogacarjev trg each Friday from mid March till the end of October. The square is full of little wooden stalls with jaunty green and white striped canopies. Smoky plumes rise from many, pausing in the air before wispy fingers laden with intoxicating aromas are despatched to ensnare passing (twitching) nostrils. The choice is overwhelming – from traditional Slovenian nosh to contemporary and world cuisine. Stalls tempt with falafel, suckling pig, Indian wraps, Belgian waffles… horse meat burgers. The square bustles and buzzes with enthusiastic foodies who, like us, are trying to decide which stall appeals most. We make three circuits, struggling to make a decision and wanting it all, before finally opting for a tasty, but not very adventurous, herby sausage in a roll (me) and a pot of spicy noodles which leaves Andy gasping for air while a sweat tsunami pours from her forehead into her eyes.
Next to Pogacarjev trg is Vodnikov trg where there’s a more conventional daily market which, on a hot September day, sells huge cups of refreshing, and soothing if you’ve eaten spicy noodles, raspberries, strawberries, blackberries, and grapes. 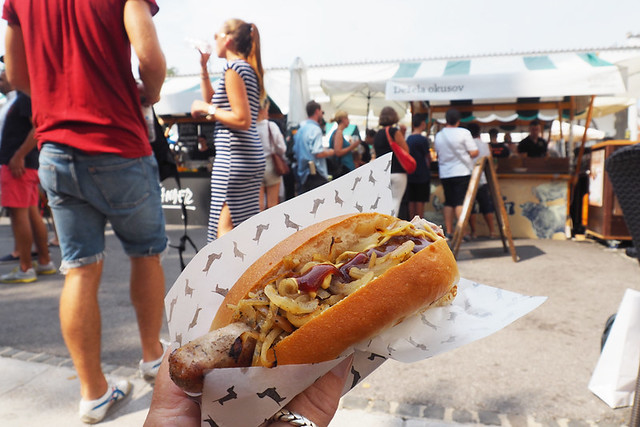 The whole of the Old Town can feel like a delicious shrine to food and drink; too much to try in a couple of days, a week, a month, a year. It’s our sort of place. On the opposite side of the river from the market, bars and restaurants blend imperceptibly into one another, welcoming places offering craft beers, Slovenian wine, and homemade lemonades. The music is jazzy/bluesy/eighties-y and signs outside cool bars like Fany and Mary are witty – “unattended children will be given a free tequila and a puppy” (the no nonsense Slovenian sense of humour is also right up our street). 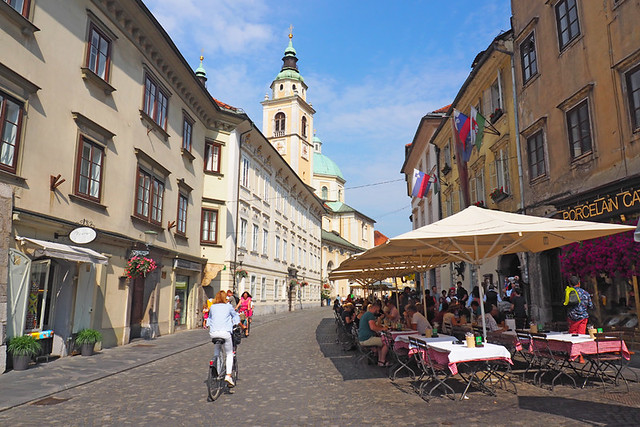 Green Ljubljana
The old quarter is mostly pedestrianised. Ljubljana is a bike-friendly city, but here it’s old-school urban bicycling, where cyclists are dressed no differently from the pedestrians they weave through, none of that Lycra and aliens’ head hats business. Both cyclists and pedestrians occupy the same spaces harmoniously, something which isn’t always the case. For some reason mainland Europe seems to manage this mixed marriage better than Britain. Maybe that’s partly to do with the pace of daily life. A slower pace from both sides means less potential for conflict. 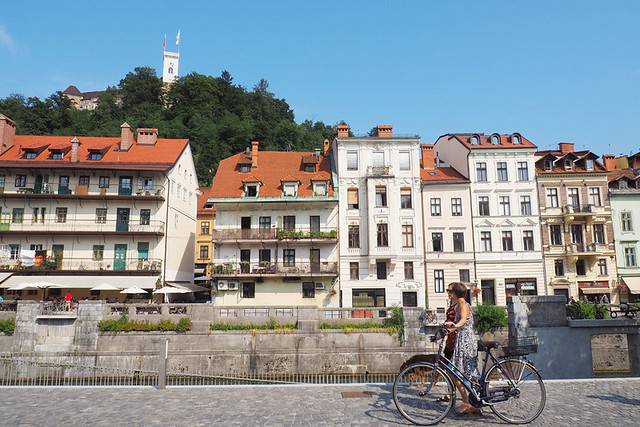 We buy one bottle of water all the time we’re in Slovenia, refilling with sweet spring water from fountains in both towns and in rural areas. In Ljubljana, some of these fountains illustrate the sense of humour which seems to be part of the national character. In one instance we fill our bottle with water pouring from the mouth of a bronze kangaroo. 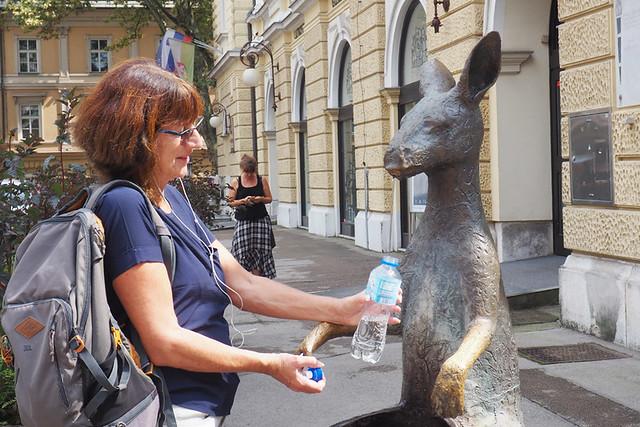 The green lung of the city is Tivoli Park, which almost stretches to the fringes of the historic quarter. Designed in 1813 it covers an area of five square kilometres and is made up of chestnut tree-lined avenues, ornamental gardens, lakes with water lilies, fountains, and funny little sculptures, including a hobo character striding grumpily across the grass, and a man on a bench staring at a Lilliputian version of himself sitting on the armrest. 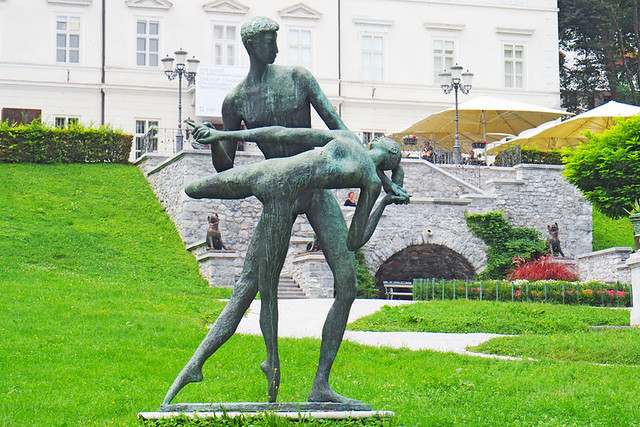 Ljubljana after dark
On two nights we’re drawn to the restaurants along Stari trg – it’s a magnet of a restaurant quarter even though there are plenty of alternative and attractive dining areas, including alongside the river. And over two nights we’re turned away from our first choices; at the weekend it’s rammed with diners. But the restaurant scene is so varied in Ljubljana it doesn’t matter, there are so many good places to eat. 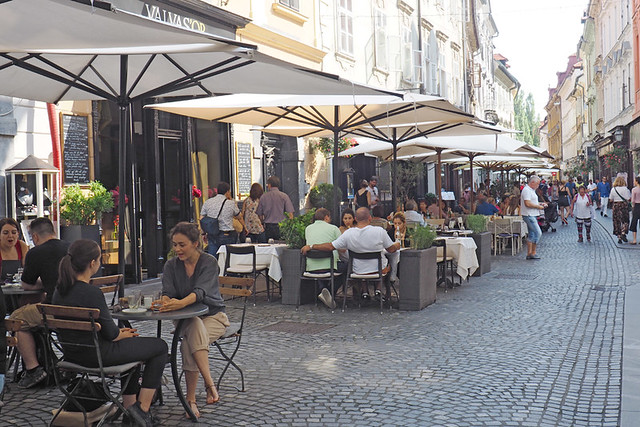 On our first night we dine at Marley and Me. The name is initially off-putting, sounding like a restaurant serving mediocre international fare in a purpose-built resort, but its menu convinces us to give it a try. Homemade chicken pate with truffle oil and onion marmalade followed by sea bass on asparagus cream, and gnocchi with sliced roast beef in truffle sauce confirms we made the right decision. The following night we get even luckier, with one table coming free at just the right time in swish but not overly expensive Valvas’or. Asparagus tempura gets the juices gushing, whilst risotto with sea bass, fennel and saffron sauce and a fish fillet with parsnip puree keep the buds in an ecstatic mood. 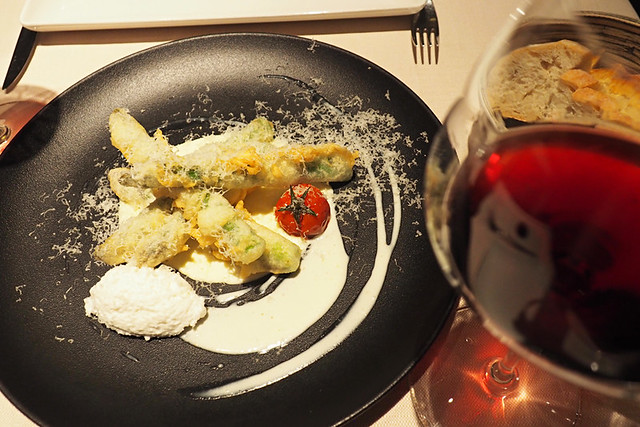 After dark, Ljubljana’s streets are as likely to bring on a bout of wide-eyed wonder as they are during the day, especially during the summer season when there’s a programme of free street entertainment. We pause first in a wide square where a jazz band plays to a sizeable audience, and then again in a postage stamp-sized square where a trio of girls sing haunting, traditional melodies to a more intimate crowd. The sound of music coming from elsewhere draws us up narrow alleys and along cobbled streets to seek out the sources. It’s an anarchic, unplanned route which invariably leads to something which puts smiles on our faces; the best being when we encounter people dancing the tango in colonnades bathed with red light. The ‘Roxanne’ colour scheme adds an air of voyeurism to watching dancers skilfully perform highly sensual tango moves. It’s not a performance by professional dancers, it’s simply more people dancing in the street. As we watch people making love with their clothes on there’s a sense of being extras in an Eastern European art house movie. 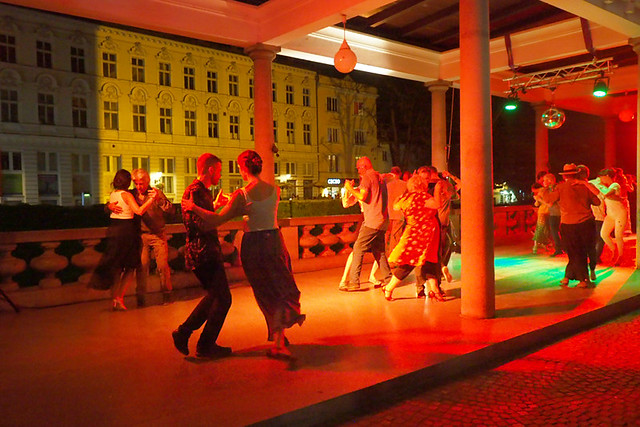 And therein lies the great charm of Ljubljana. It’s a good looking, historic city but there are prettier cities with grander architecture and more crowd-pulling monuments. However, Ljubljana exudes the most euphoric vibe of any city we’ve visited. It’s a joyful place to spend time in, especially if you’re into good food, fine wine and great music. The feelgood factor is way off the chart.

If Ljubljana was a movie it would be one directed by Cameron Crowe.