The Black Forest:, Germany – Mid October 2015
Icy ears and numb fingers. At least the train we board at Altglashütten offers some warm respite from a light breeze with a nasty bite. But we only have around ten minutes to wallow in the cosiness of our squat, moving metal sanctuary before we have to brave the chilly morning again. Outside the window, seven kilometre long Lake Schluchsee would be a wonderfully wintry sight for sore eyes, especially as big fluffy snowflakes have joined the scene. The Black Forest has become the white forest. 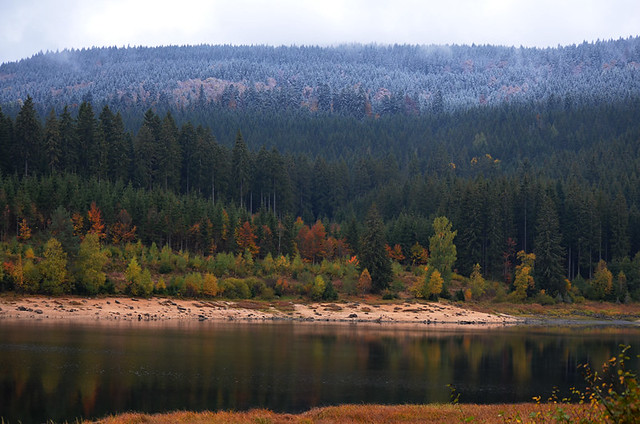 Big, fluffy snowflakes and we’re wearing trousers and jackets that are far too thin, gear more suited to warmer climes – spring and early autumn. We have no gloves and no hats. Last week it had been 28C. Winter has leapfrogged autumn out of nowhere.

The fluffy flakes turn to driving sleet. As we gingerly step from the warm train onto a freezing, sleet-blasted platform we know there’s no way we’ll escape hypothermia if we attempt the 15km route around the lake dressed as we are. 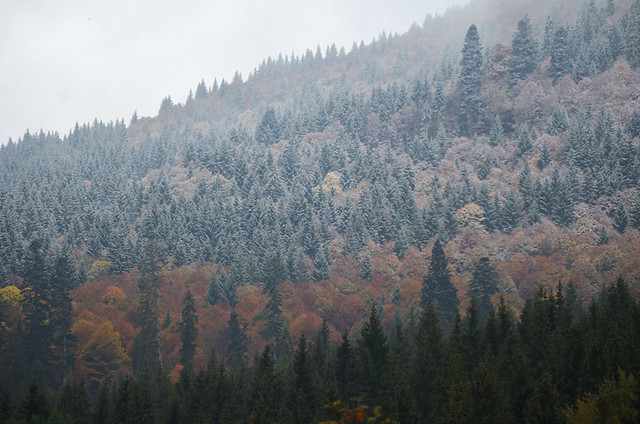 The beauty of towns in rural parts of towns in Germany is there always seems to be an outdoor shop. And so it proves in Schluchsee. The shop has a bargain box with gloves and hats. Lovely, warm, woolly, fleece-lined affairs at knock-down prices. We ‘tool’ up. If my hands could sigh with pleasure they would. The heat making a great escape from the top of my head is now turned back by a woollen blockade. We both now feel warm and ready for the trail.

Heads down, we set off into the sleet to circumnavigate the long lake.

La Laguna, Tenerife:- Late Janary 2018
A giant has upturned a huge bucket over La Laguna on Tenerife, rain plummets onto the old streets like it has an aspiration to be Niagara Falls. It’s lunch time and we’re looking for somewhere warm and dry to shelter from the mini monsoon. With heavy drops machine-gunning our backs we scamper into the appropriately named El Refugio del Abuelo Miguel and grab a booth away from the perpetually open front door. Three men sit at the bar chatting and singing along to traditional folk songs between sips from squat glasses of vino del país. We order a couple of arepas (Venezuelan filled cornflour pancakes) and listen to water cascading down the historic street outside. 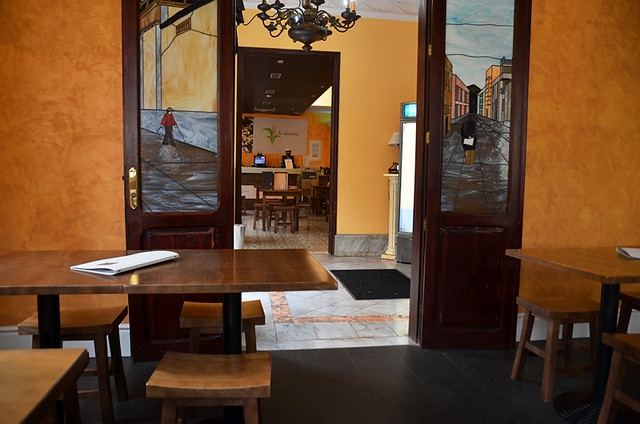 La Laguna sits at around 600m above sea level. It’s not a particularly warm place in late January when the sun isn’t shining. But we know that and have dressed accordingly. However, a cold front has descended on the Canary Islands and temps have plummeted. Our fleeces and light rain jackets are not enough to combat the damp, chilly wind. Even inside El Refugio we don’t warm up as much as we’d like.

There’s a gap in the rain and we take to the streets again, managing to cover a couple of hundred yards again before Monsoon – The Sequel starts forcing us into the first bar we pass, located inside an old town house (aren’t they all). It’s stylish and contemporary in a way which compliments the colonial architecture. On a cold, wet day it should be full of shoppers and sightseers sheltering from the inclement weather. It isn’t. Only one other table is occupied, by two women who, despite wearing heavy coats, huddle over their café con leche. 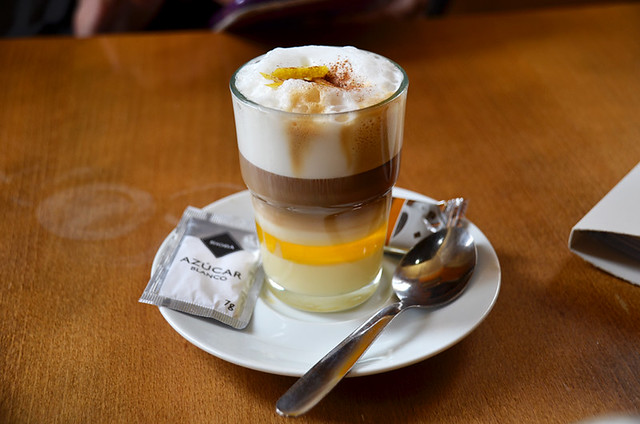 We order a brace of warming barraquitos accompanied by red wine chasers, and then take up the huddle position ourselves. As we warm or hands over the hot, sweet, alcoholic coffee we think of Germany.

The Black Forest:, Germany – Mid October 2015
With three quarters of the Schluchsee route completed in good time – the relentless sleet motivating our walking speed – we ease off. It’s time for lunch and we’re nearing a hütte – a wooden lodge with violet and lilac flowers tumbling from its balcony. We open the door, step inside, and are instantly greeted by blast of heat which smothers our faces with warming kisses. We take off our jackets, rub our hands gleefully and sit down beside the roaring fire. 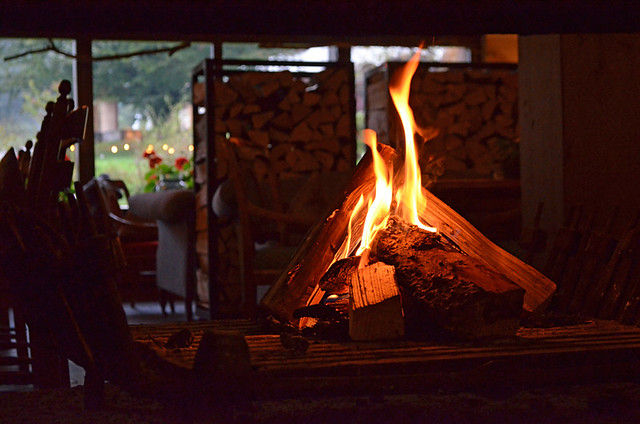 La Laguna, Tenerife:- Late Janary 2018
Unable to warm up we think longingly of cosy hüttes in Germany and Austria, places where the welcome was so literally warm it made enduring the cold worth it just for that blanket of sheer pleasure which falls around the shoulders when you step from icy temps into glowing ones. 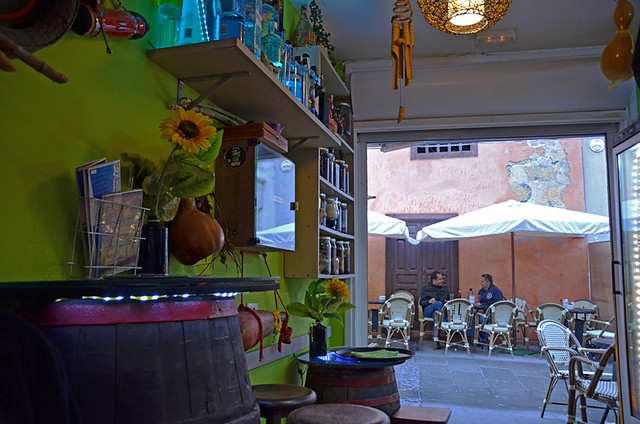 You don’t generally get that in the Canary Islands. I can think of a few places where there is a warming fire, but mostly bar and restaurant owners don’t adjust their environment when the thermometer drops. Doors that are wide open in the default setting of warmer weather remain wide open when it gets cold. They completely lack that cosy element. We’ve huddled in bars and restaurants on most Canary Islands, it’s just a thing.

Canarian bars and restaurants are missing an obvious trick. There are plenty of people on La Laguna’s streets scouring the old town for a cosy bar with closed doors and the merest semblance of warmth. Instead of being filled with refugees from the cold and damp, the bars sit mostly empty.

The one place we pass which has figured this out is, unsurprisingly, packed.

When the weather outside is frightful I’d rather be in Germany… or any place where, when I step inside bars and restaurants, I’ll find the fire is so delightful.