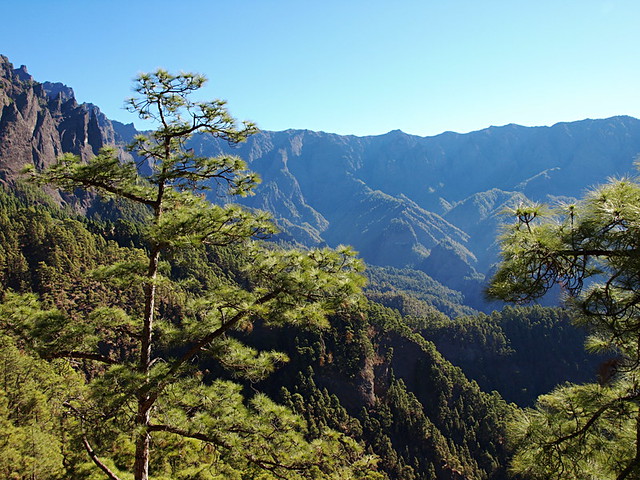 From the corner of my eye I glance a young boy skipping barefoot along the rocks to my left, his long, golden locks catching the sunlight and weaving it into their strands. His progress is too fast to follow and in an instant, he’s gone.

I continue my laborious progress along the undulating, dried river bed strewn with rocks and boulders, carefully picking my route so as not to twist an ankle or step on a stone that will dislodge and slam me, buttocks first, onto its lethal surface.

The river bed twists and I emerge from behind a rock face to see him sitting, cross-legged on top of a basalt boulder ahead of me, his expressionless face watching my cumbersome movements as if he’s trying to figure out why I’m making such hard work of it, like a fly watching a rock climber and wondering why he’s weighed down with crampons and ropes.

I’m in La Caldera de Taburiente in La Palma, the volcanic heart of the Canary Island which is known as La Isla Bonita (the pretty island) for its heart-squeezing, natural beauty. Created by the forces of erosion which have left a ‘crater’ of 8 kilometres in diameter, the Caldera de Taburiente is embroidered in a rich tapestry of pine forests, contained by sabre-toothed mountains which rise to over 2,000 metres. 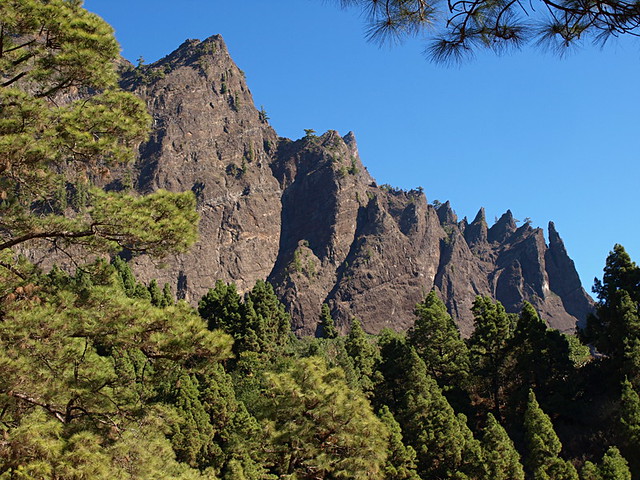 Setting out from Los Brecitos at 1,000 metres above the crater floor, our route began with a fifty minute stroll through one of the most enchanting forest paths my hiking boots have ever had the pleasure of treading. Above us, the mountainous outline of Roque de Los Muchachos stood jagged against a sapphire sky while around us, the Canarian pine trees shared their shade and perfume as the path wound its dappled way down into the crater.

Trapped by the mountainous perimeter, the air within the Caldera is still and heavy, intensifying every sound. As we descend further I hear something that appears to be an audible illusion – the sound of running water. In the grip of drought, it’s been more than 12 months since the Canary Islands have seen significant rainfall and La Palma’s sister islands of La Gomera and Tenerife have both suffered devastating summer wildfires in a year which has set new records for high temperatures on the islands.

The prospect of there being running water on La Palma is one which I simply cannot get my head around… until we reach what is quaintly called La Playa de Taburiente (Taburiente Beach) where a fast flowing river tumbles over waterfalls and swirls around rock pools as it hurries along the valley floor, turning disbelief into joy. 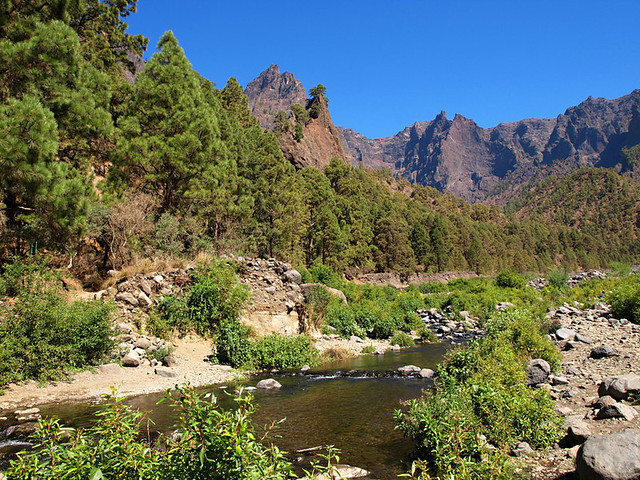 Dipping my feet in the icy, crystal waters, I watch dragonflies hover over the surface of the river, skimming their tales across the water while around them, butterflies flit from petal to stem on the pink faced rock roses. Further downstream a girl in a bikini emerges from the river and lies on a hot boulder, spreading her hair across the rock’s surface to dry while her friends spread a picnic on the bank, holding fistfuls of tomatoes in the river to wash and cool them. Camping in the nearby site, this Eden is their playground.

Following the river through the Barranco de Las Angustias, a shady bank provides the perfect spot for al fresco lunch. Rested and fed, I leave the route and detour to a fork in the ravine. To the left the river ends in a large pool where several people are taking refuge from the oppressive afternoon heat in its clear waters. To the right, the river turns deep yellow, as if someone had accidentally spilled a truck load of turmeric into it and in the ensuing chaos, yellow hand prints had been left to dry on rock surfaces. 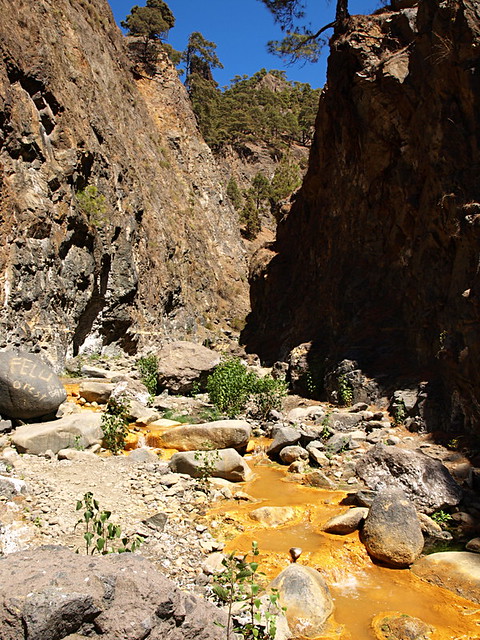 Progress towards the river’s source becomes more difficult as the walls of the gorge close in and I’m forced to use slippery yellow rocks protruding from the river’s surface to tack my way deeper into the ravine. Finally I reach what seems to be a dead end as the only way forward is barred by a rushing waterfall and it appears there is nowhere else to go. Determined to find the source of the turmeric spill, I throw caution to the still air and plunge into the waterfall, using the slimy yellow rocks for handholds and taking giant steps through the gushing water to reach the top of the fall.

When I look up, I’m facing a semi circular, rainbow wall of water cascading down a sheer rock face – the Cascada de Colores (coloured waterfall). Rich in iron and minerals collected on its journey through the volcanic mountains, the yellow river pours down the cliff face leaving deposits of greater and lesser intensity of colour depending on the flow of the water. The resulting effect is a vibrant palette of colour, from deep, russet red through rich ochre and saffron yellow, flanked by lime and sea green mosses, each crevice and contour in the rock face highlighted by the blend of rich tones in Nature’s masterpiece. 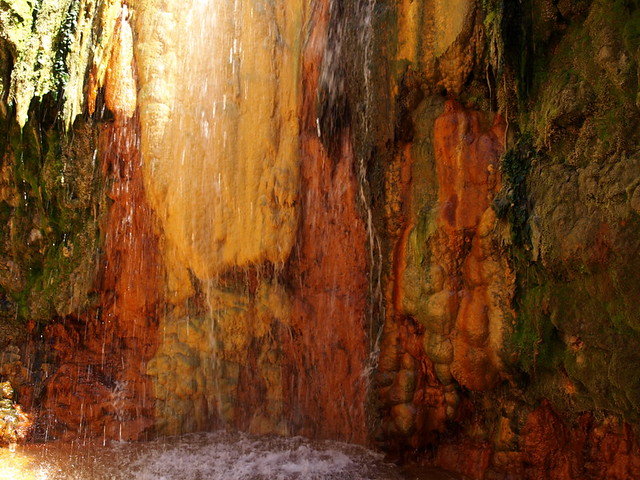 It’s a moment of surreal astonishment, one that burnishes its image on my retina.

As I tread my way back through the stony assault course of Barranco de Las Angustias, the antics of my golden haired Puck come as no surprise to me; in this magical place, it’s all a bit like a Midsummer Night’s Dream.