“My grandmother believed the people in the TV set could see her.”
Hetty’s eyes shine as she recounts tales of her grandma.
“When the President was going to address the nation she would put on her best dress, take off her headscarf, brush her hair, put in her teeth and sit straight backed in front of the TV. When the President said “Good Morning, Cape Verde,” my grandmother would reply: “Good morning, Mr President” and bow to the TV.”

We’ve spent the best part of the last hour traipsing up the cobbled road that winds from the coast, past the cemetery on the hill, to the village of Pinhão on Santo Antão in Cape Verde. The morning is still young yet already the air resonates with heat. As we walk, our feet finding their own rhythmic pace and our heads bowed against the glare of the sun, mothers and small children pass by us on their way down the hill to the school in Sinagoga. Sparked by the view of the cemetery on the hill and despite the effort of the climb, all the way up Hetty regales us with tales of her grandmother, a woman who fought hard all her life to make a home for her family. 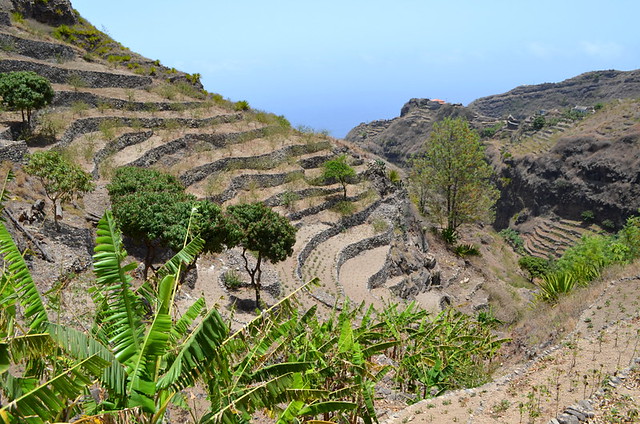 From Pinhão we traverse the ridges that scour the interior of the island, each ascent revealing a new and equally dramatic ravine plunging down to the valley floor, neat terraces sculpted into its flanks. Clumps of acacia trees and the green sword leaves of agave break the monotony of the scorched landscape where rain has been absent for six months or more. In the depths of each ravine a green seam runs, fed by springs that carry moisture garnered from the clouds by the ragged fingertips of the mountains and chased down their monolithic sides to feed the valley floor. Randomly dotted around the terraces and the breeze block houses, small stone cottages with tidy thatched roofs sit quietly alongside dry stone walls; coffee beans are spread on a flat roof to dry in the sun; and from the valley floor, the occasional wisp of smoke rises from a grogue distillery, carrying the scent of wood smoke to our nostrils. 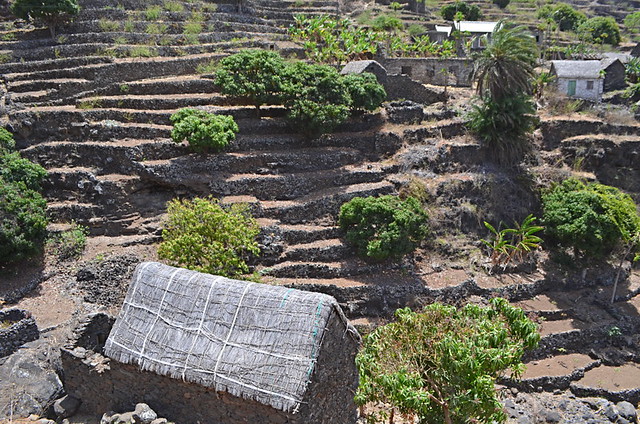 The valleys grow greener as we traverse deeper into the mountains, grasses replace soil; trees cast short shadows at their feet and banana plants sway in the breeze. Traversing a flat ridge, Hetty calls to a settlement of half a dozen houses over the other side of the ravine. A voice answers.
“I’m just ordering our coffee,” says Hetty.

Continuing to the mouth of the ravine we enter a small wood and find places on the rocks to sit and enjoy the delicious rarity of the shade. From our rucksacks we take the filled Tupperware boxes Hetty gave us this morning in which her cousin has prepared a pasta lunch. Still warm thanks to the sun beating down on my rucksack, it’s the second tastiest picnic lunch I’ve eaten, the first was yesterday’s rice and beans, also supplied by Hetty’s cousin. Just as we’re finishing eating, I hear a rustle in the undergrowth and look around to see a young girl stepping barefoot across the rocks towards us carrying a tray of cups. Behind her a younger boy carries a thermal flask.
“Here’s our coffee,” says Hetty.
Smiling, the children place their gifts on the rocks and acknowledge our thanks with a graceful “de nada” – you’re welcome – before they leave us. 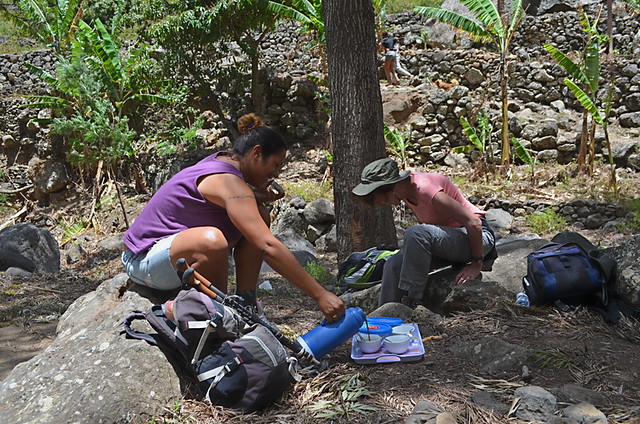 It’s a surreal scene as we sit amongst the trees, in a remote valley on a remote archipelago in the Atlantic Ocean sipping fresh, aromatic coffee served on a tray. A pop-up café, Cape Verdean style.

When we’ve finished we carry the tray back to the house where two men sit on the porch beneath the shade of a thatched roof shelling peas, laughing and drinking beer. We stop for a few minutes to chat before continuing on our journey. Twenty minutes later we pass the women of the house walking towards us with heavy sacks of rice and corn on their heads. They’ve been working in the fields all morning and are returning home to prepare lunch. Like everyone else we have met or simply walked past since we arrived in Cape Verde they smile, say “boa tarde” and wish us well. 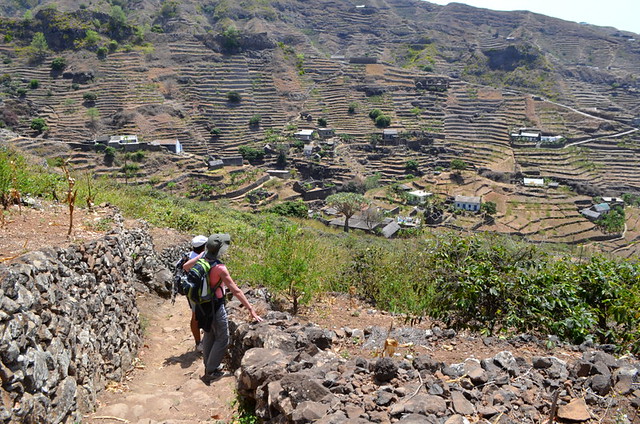 By the time we reach Lombo Branco the afternoon shift of children are setting off to walk the long path to school. Primary education is now available for all in Cape Verde but there are more children than there are schools so those who live furthest away go to school in the mornings and the ones who live nearer go in the afternoons. For each child it means doing the academic year in half the time, twice the work. Few children can afford to take the bus and for many the journey on foot can be as long as two hours each way, which is almost as long as we have taken to walk less than 10 kilometres over this testing terrain. 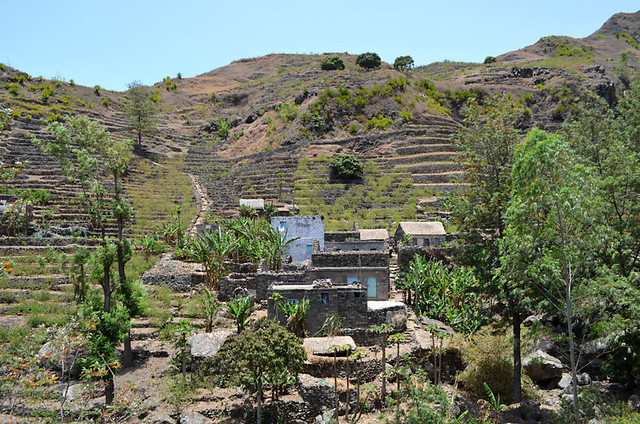 When Hetty’s grandma was a child, few children went to school at all but she was one of the lucky ones and enjoyed the luxury of a couple of years of being educated before she had to leave to go and work in the fields. Still a child herself, every month she had to travel further and further to harvest the fields and bring back money to the home and her siblings. Today her granddaughter walks those same hills guiding visitors like us who have come to enjoy the beauty of this remote paradise, and keeping her grandmother’s spirit alive through her stories.

Before she died, Hetty’s grandma was able to see her great granddaughter on Skype shortly after she was born and, just as she had always known, the people in the little screen could see her just as clearly as she could see them.