Oldest and most African of all the Canary Islands, Fuerteventura is often dismissed as little more than a vast beach. Though its beaches undoubtedly count amongst the best in Europe, there is a great deal more that shimmers beneath the blazing sun and amongst the red mountains of this enigmatic island.

Fuerteventura Overview
Just 100km (60 miles) from the coast of Africa and redolent of the desert and semi desert conditions there, Fuerteventura is the second largest of all the Canary Islands, covering a surface area of 1730 sq km (668 sq miles) and measuring 100km (60 miles) north to south and 30km (19 miles) east to west. Characterised by its smooth, mountainous interior, its near-constant prevailing winds and its magnificent beaches, this was once described by a friend of ours as ‘the purest of the Canary Islands‘ in terms of its geological make-up, and it’s difficult to disagree with her.

15 million years of wind erosion have worn Fuerteventura’s volcanic peaks to soft contours in myriad shades of burgundy and burnt orange. Its highest peak a mere 807 metres above sea level, the island rarely sees rainfall and even compared to its northern neighbour of Lanzarote, beyond the coastal resorts and cultivated terraces of its villages there is little in the way of green to be found, save that upon which the sprinklers of the island’s two golf courses are trained. But despite its almost complete lack of greenery, Fuerteventura’s landscape is beguiling and surprisingly beautiful.

Goats outnumber Majereros (natives of Fuerteventura) by a margin; 140,000 goats calling the island their home, compared to a resident population of 110,000. The island’s main town of Puerto Del Rosario was known up until 1956 as Puerto des Cabras (the goats port) as the import/export of goats was its primary function. Today the town has a population of 40,000 and little to offer tourists who give it a wide berth en route to the beaches of the north and south.

In mass tourism terms Fuerteventura lags a long way behind Tenerife, Gran Canaria and Lanzarote with a mere 33,000 visitors descending on the island in 2012, the vast majority of them heading to the surfers’ paradise of Jandia in the south and to Corralejo in the north, where expansive deserts of soft, white sand lapped by crystal turquoise waters offer a Sahara meets Caribbean experience for beach lovers, surfers and naturists.

The main resorts on the island are Corralejo in the north and Costa Calma in the south.  Corralejo is favoured by the British and has a quaint nucleus of original fishing village around which the usual tourist tat developments have been constructed. Off its coast and accessible by ferry from the resort is the tiny nature reserve of Los Lobos where you can play desert island castaway amid the Shearwaters, gulls and Petrels who colonise it. In Costa Calima hotel developments and commercial centres occupy a long, narrow strip along the endless beach of the coastline, separated from each other by a green walkway of trees in a tourist development nod to the environment. Costa Calima is the preferred destination of Germans and Scandinavians who represent the largest section of visitors.

Buzz Trips Opinion
Fuerteventura has a wealth of charms that appear to be stuck below the radar of holidaymakers and tourism industry professionals who seem to fixate solely on its sunshine coastline. Ask sports enthusiasts what they think of Fuerteventura and cyclists will tell you about its miles of near-empty roads and challenging mountain ascents; sailors will wax lyrical about its perfect windsurfing and surfing conditions and hikers will describe ancient paths that tread lava fields, skirt volcanoes and climb ridges with views that carry your breath away on the Trade Winds.

Drag yourself away from the endless white and blue and you’ll find swathes of aloe vera plants; salt flats, olive groves, colonies of Barbary squirrels, award winning cheeses and pretty hamlets tucked into the soft folds of the valleys, their bougainvillea-covered walls standing stark against the shimmering heat haze. And of course goats, lots of them.

June 3, 2019 Jack Chile, Fuerteventura, Lisbon, Milan, Munich, Scotland, Tenerife, Travel Talk, Zadar 0
A factor often connected with satisfaction levels is picking up/dropping off rental cars. The experience, good or bad, doesn’t impact on how we view a destination, but it can leave a lasting impression. […]

September 17, 2018 Jack El Hierro, Europe, Fuerteventura, Gran Canaria, La Gomera, La Palma, Lanzarote, Spain, Special Feature, Tenerife, The Canary Islands 0
Going into detail about the differences between the Canary Islands would fill a book, so I’m only going to provide a brief snapshot as an illustration why it’s essential to universe-hop when carrying out travel [...]

March 11, 2018 Jack Austria, Crete, Fuerteventura, Great Britain, Spain, Tenerife, Thailand, The Destination 0
Once you’ve been told the cave, or volcanic tube to be more exact, was once home to eyeless cockroaches and giant rats it’s hard to banish thoughts of mutant creepy crawlies from your mind. […]

June 22, 2017 Jack El Hierro, Fuerteventura, Gran Canaria, La Gomera, La Palma, Lanzarote, Tenerife, The Canary Islands, The Destination 0
Quite a few years ago, when we were wearing particularly thick rose-tinted glasses, we had a discussion with a Canarian friend about the beauty of the Canary Islands. Although she loved the islands she took [...] 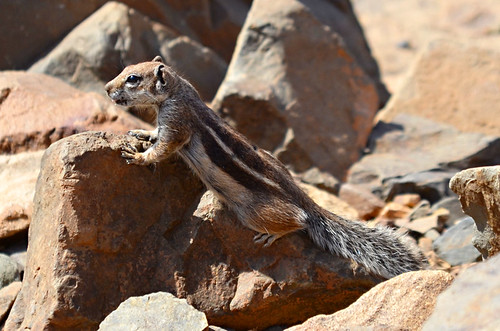 From a single pair that was carelessly allowed to escape, their numbers are now thought to be in the region of 300,000 and rising... [Read More...]