The hills are alive with the sound of music. No, really, they are.

A crisp, clear, haunting melody wafts down from on high to serenade us before it fades away into an early morning mist proving reluctant to relinquish its grasp on the glassy water. 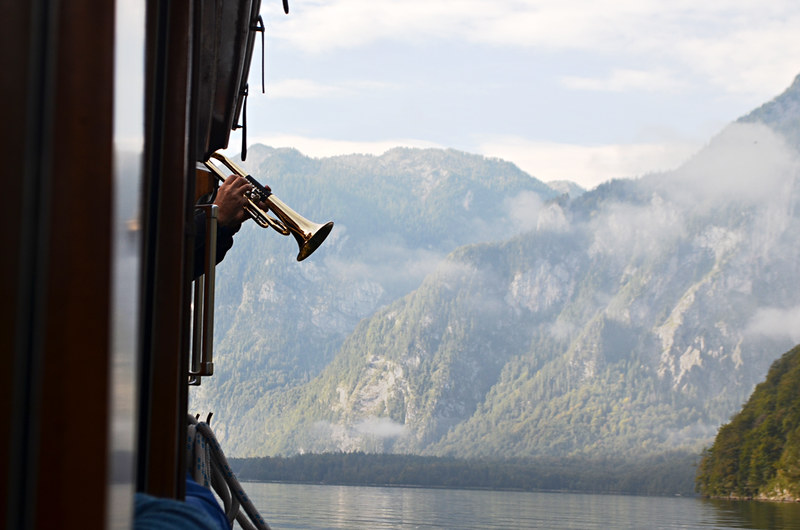 It is quite enchanting, maybe in more ways than one as the music didn’t begin its journey from way up on the clifftop. It was created by a boatman beside me whose lips are pressed to a gleaming trumpet’s mouthpiece. He puts his mouth to the instrument and plays a few more notes. Seconds later the cliffs repeat the piece of music… loud and clear. On some days the cliffs bounce back the music more than once. The sound is so sharp I peer upwards, suspicious there’s another trumpet player clinging to the rock.

I’m tempted to suggest to the trumpet player he should try a few notes of It’s a Kind of Magic. 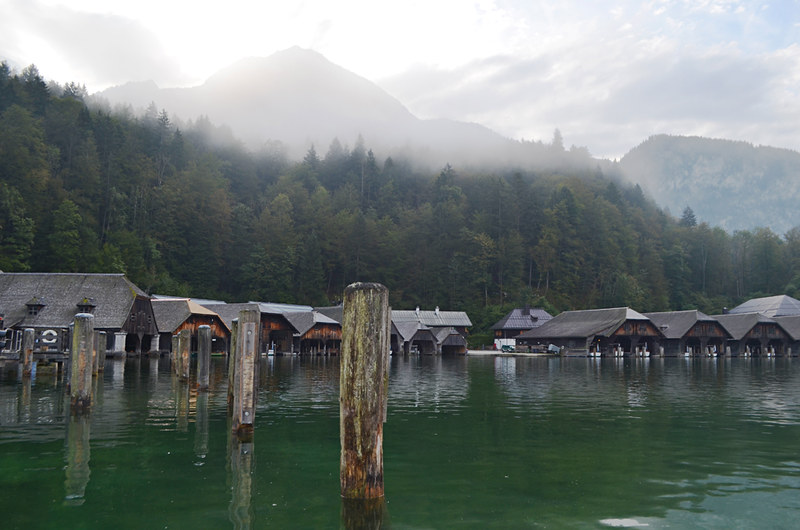 This beguiling, and slightly unnerving, phenomena sets the perfect tone for an exploration of a body of water which has numerous bewitching qualities; Lake Königssee, an eight kilometre long emerald tear in the Bavarian Alps. It feels more fjord than lake. The hard, high mountains which surround it remind me a little of sections of the Yangtse.

Staying in an apartment in Schwab meant we were able to beat the hordes drawn daily to this scenic feast; our river boat the first to create ripples on the comatose surface. There’s an early morning stillness to the lake and the noiseless progress of our electric vessel adds to a quasi-soporific state, especially as the sun is still huffing and puffing its way into the sky, struggling to make its presence felt above the imposing cliffs which engulf Königssee. A small red cross at the base of one of the cliffs betrays the lake isn’t always quite so benign. Seventy pilgrims drowned at the spot during a thunderstorm in 1688. 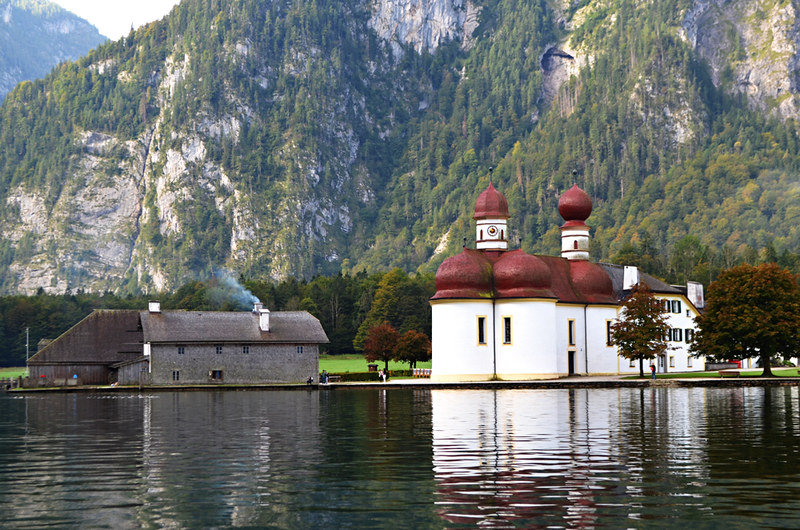 Our first stop is at St Bartholomä, home of the distinctive onion-domed chapel which invariable features on just about any photograph you’ll see of Lake Königssee. The small hamlet used to be a favourite hunting base for Bavarian royalty. St Bartholomä is one of those places which actually looks even more impressive in reality; its beauty changing depending on which angle you view it from.

We’re not quite ready to explore it yet. We continue to the furthest end of Lake Königssee, passing the Schrainbachfall cascading into the lake before we dock at Salet. 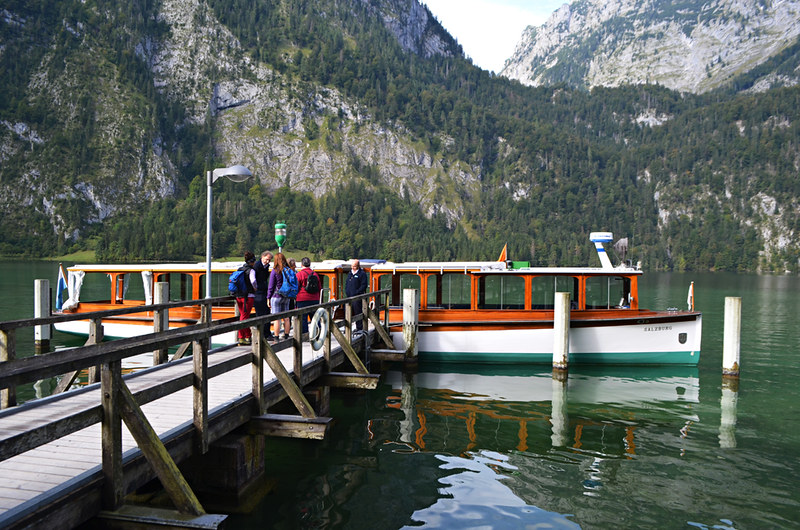 The blurb tells us it’s a 10 minute walk to a more remote lake, Obersee. It’s not incorrect; however, accessing the most desirable end of Obersee involves negotiating a narrow, and occasionally steep, path which hugs the base of the cliffs along one edge of the lake.

Arriving at Fishunkelalm on a sunny morning feels as though we’ve followed a path which led us to a more fantastical dimension. Crazy as it may sound, lovely Königssee seems relatively plain by comparison. Completing the scene perfectly is a quaint (aren’t they all) hütte where refreshments appear magically via a wooden serving hatch. 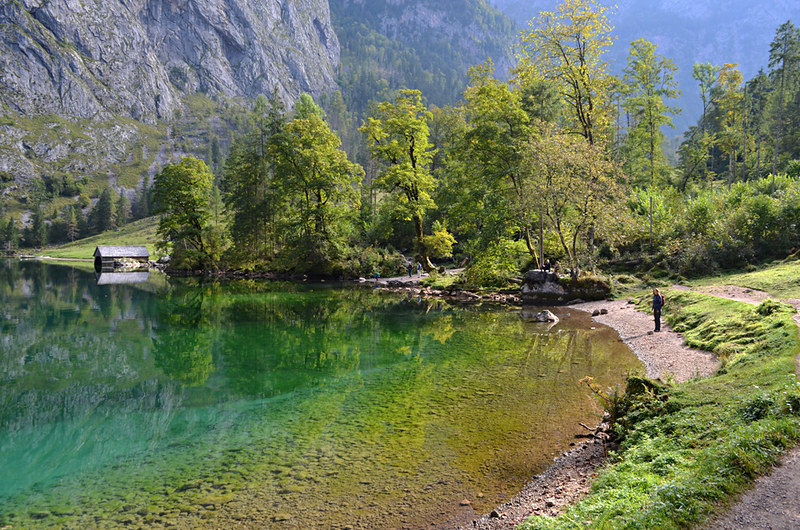 Again we continue onwards, watched by curious bovines as we climb through grassy alms to eventually arrive at a mountainous cul de sac. Or so it seems. A signpost suggests there’s a route out. I’ll leave that to braver men than I am, Gunga Din. It is also the location of the Röthbachfall, Germany’s highest waterfall. This was what had prised us from staying around Lake Obersee. But the trickle of water cascading down the mountain face is underwhelming. We turn tail and head back to the more awe inspiring lake. 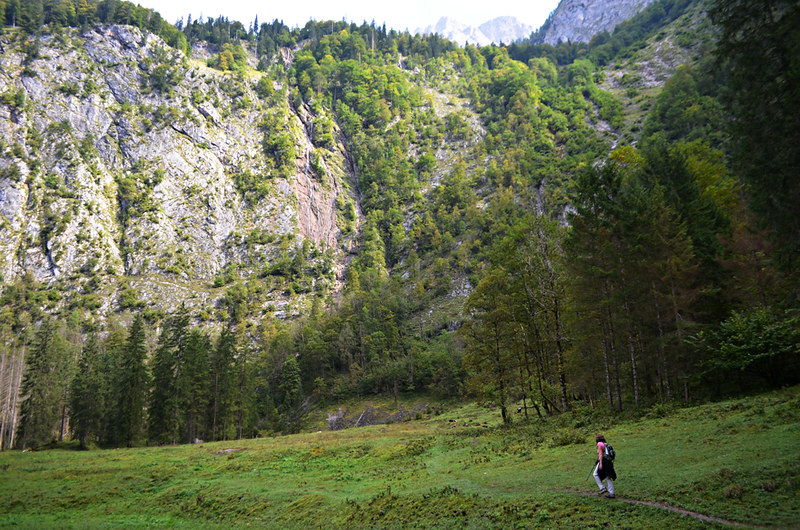 By the time we arrive back at Obersee a fleet of other boats has discarded their human cargoes. There aren’t enough visitors to spoil the place but the hütte is now rammed with people staring in reflective silence at the equally reflective surface of the lake. We head against the tide and take the path back to Salet; the narrow trail now full of people coming from the other direction. Many are dressed for walking, many aren’t. Some young Chinese girls in delicate summer dresses and dainty pumps struggle to deal with the hard, uneven contours. 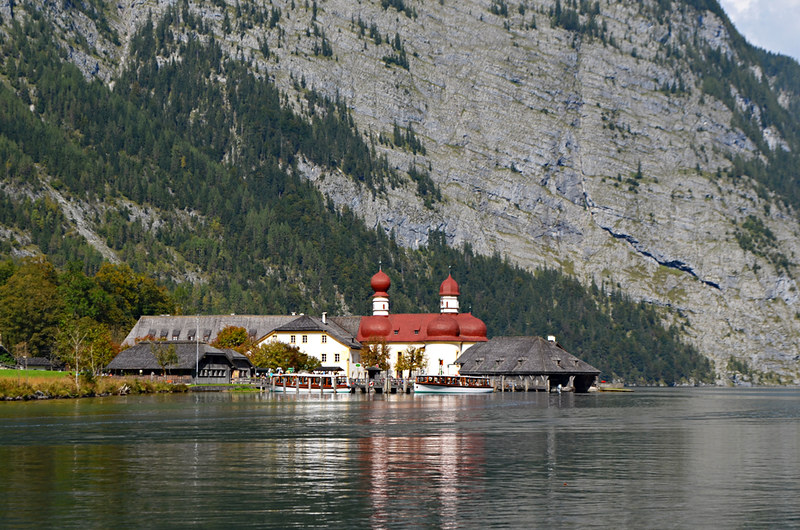 Contrastingly there is only one other couple on our boat back to St Bartholomä, now bathed in sunshine and looking exactly like it does on the postcards. The hamlet also buzzes with visitors. But, again, not enough to distract from its obvious charms. After a brief stroll around the church and along lakeside paths we turn inland, following an easy track through a delightfully dappled, tree-lined avenue. The neat route quickly becomes wilder as we ascend through a straggly forest for 3 kilometres to reach a sign which warns us the path is about to become a ‘red dot’ route. Translated that means it’s relatively dodgy. In reality, it isn’t. Landslides have destroyed part of the route but it’s easy to cross those sections. After fifteen minutes we reach another sign. Amongst a cluster of panicky exclamation marks and achtungs there are two words which give pause for thought – ‘mortal danger!’ 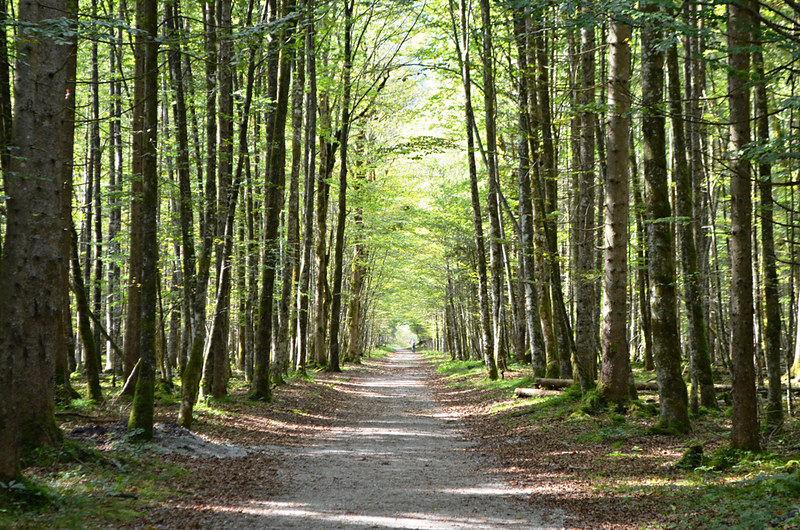 The warning marks the viewing area for the Ice Chapel – a domed vault in an ice field which never fully melts. This natural attraction is impressive; the chapel’s gaping mouth alluring enough to tempt some to ignore the mortal danger sign and venture inside. 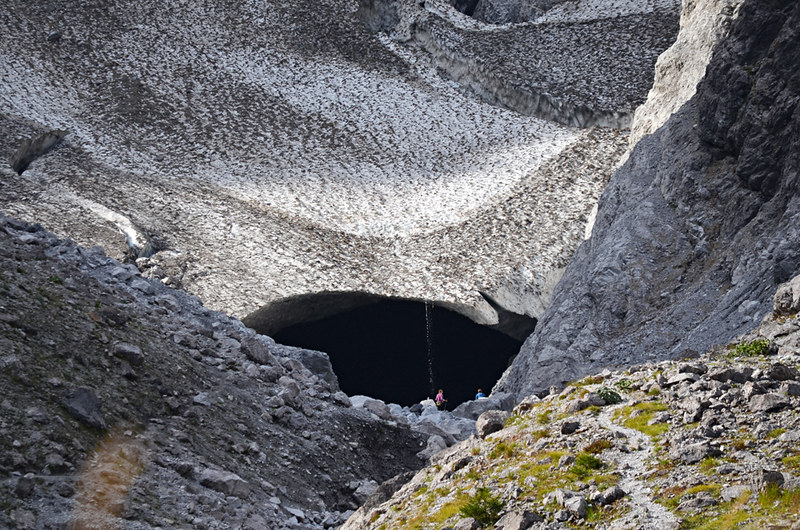 We weigh up the options. Risk being trapped in an icy tomb or down a dark, dunkel bier back at St Bartholomä.

The vote is unanimous.

Königssee Fact-file: A fleet of 18 electric boats ferry passengers around Lake Königssee at 15 to 30 minute intervals between 08.00 and 19.05 during peak season. It takes around an hour to cross from one end of the lake to the other. A return ticket to Salet costs €17.50 and allows passengers to visit St Bartholomä as well. There are cheaper options and family tickets available. See the Lake Königssee website for more details.