There’s an early morning energy to Cruz de Tejeda which is unusual for a rural setting, a buzz of activity that could, if you slip your imagination into gear, easily be a Wild West outpost waking up.

Cruz de Tejeda, a cross at a crossroads on the geographical centre of Gran Canaria. As I wonder which came first, cross or crossroads, a chicken crosses the road prompting another ponder – ‘why did… ‘

It’s a cockerel in truth, a gallas cockerel head up, chest out and high stepping as if he was on parade. 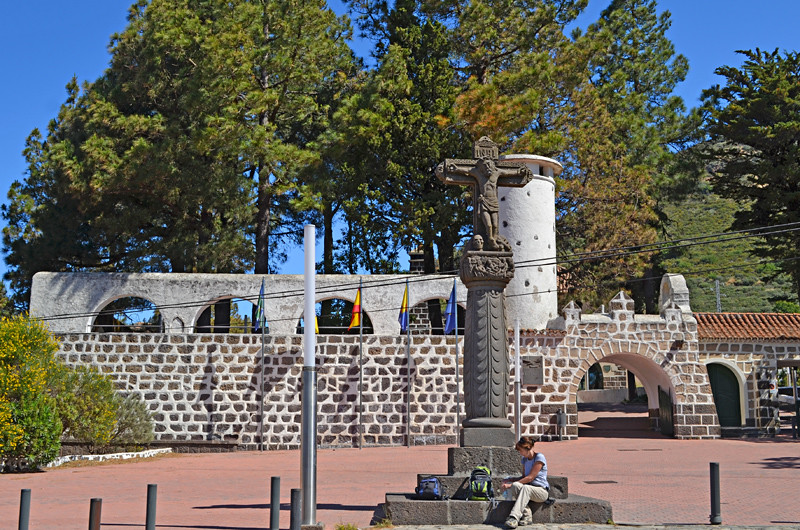 The outpost vibe is helped by a line of wooden huts where vendors lay out their wares as the sun creeps below the cooling shade of a row of pines. The items on sale have as much of a South American flavour as a European one – ponchos, patterned rugs, homburgs. One vendor places a chair under a tree and a tiny Yorkshire terrier hops on. He’ll spend the rest of the day here whilst his owner tries to earn a few coins. Tied to a wall is a bored looking donkey.
Even the entrance to the Parador, where we’re staying, has a slight look of a fort about it. Maybe this frontier atmosphere is the reason I feel as though we’re setting out on an adventure rather than an oft walked trail. 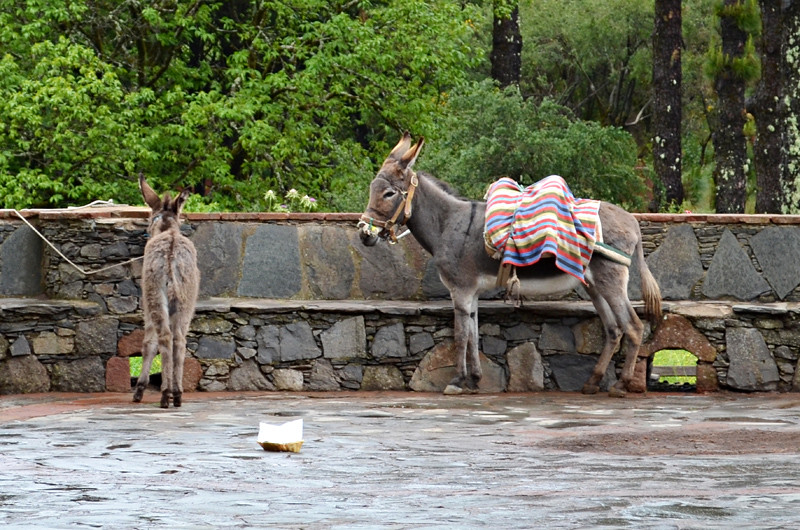 We stock up on water from one of the restaurants which will feed travellers passing Cruz de Tejeda throughout the day and leave the hive of activity to start the climb to a ridge which overlooks a hundred valleys.

It’s a puff and huff climb. Thankfully the sun has still to fully clear the mountains so we’re not subjected to its full blast. We’ve walked this part of Gran Canaria many times, usually from the town of Tejeda further down the valley, but the scene below us hasn’t lost any of its impact – it’s big country, a sprawling landscape of wild ravines, proud rocky fingers, lost world plateaus and sheltered valleys. 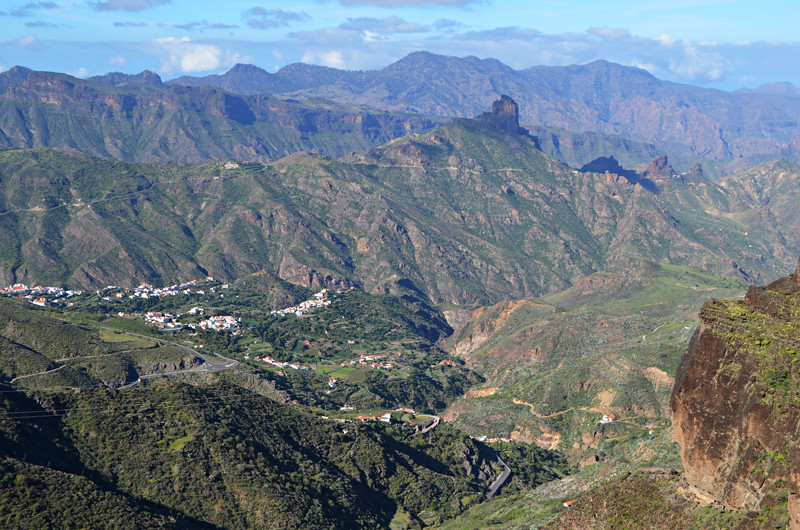 There’s a lot of gasping as we climb, a combination of various factors. It is beautiful, stunningly so. The path clings to the hillside as it curves above drops which disappear below us. It would take a braver person than me to crane their necks to try to spot the valley floor near the foot of the cliffs.

Eventually the path evens out as we approach the ridge, the drama of the valley replaced by softer curves filled with low-lying clumps of yellow broom – the Wild West replaced by Scottish Highlands. As if on cue, a shaggy-haired sheep trots past followed by a limping friend and then a shepherd as ancient looking as the rocky outcrops we’d recently been admiring. He’s almost bent double and makes the lame sheep appear quite sprightly on its feet. He doesn’t look in our direction but his hand raises slightly as a greeting as he shuffles past. 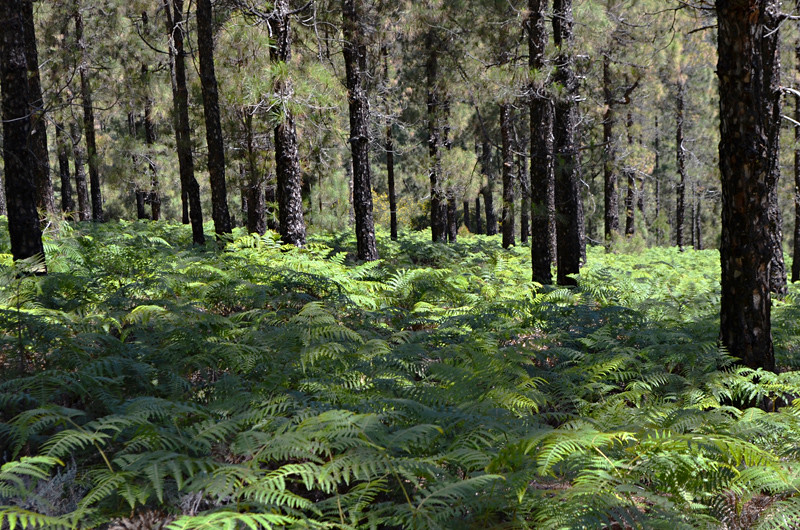 The valley views are lost for a while as we enter scented pine forest for a stretch of easy walking. At the foot of the pines lies a gloriously thick fern carpet. In the past we’ve always headed east at a convergence of paths in the heart of the forest. Today we take a route back towards the ridge and Artenara, it’s new territory for us.

The path directly ahead is one of those which taunts; at times it seems to disappear into sheer rock face causing the odd, nervous bead of sweat to break out on the forehead. The reality never quite matches up to the vision of having to do a Lara Croft along a wall of rock. It’s narrow, but flat as it cleaves a path between the drop and the pine sentinels standing guard along the edge of the cliff face. It’s close enough to the edge to encourage us to come to a stop to appreciate the panorama though. 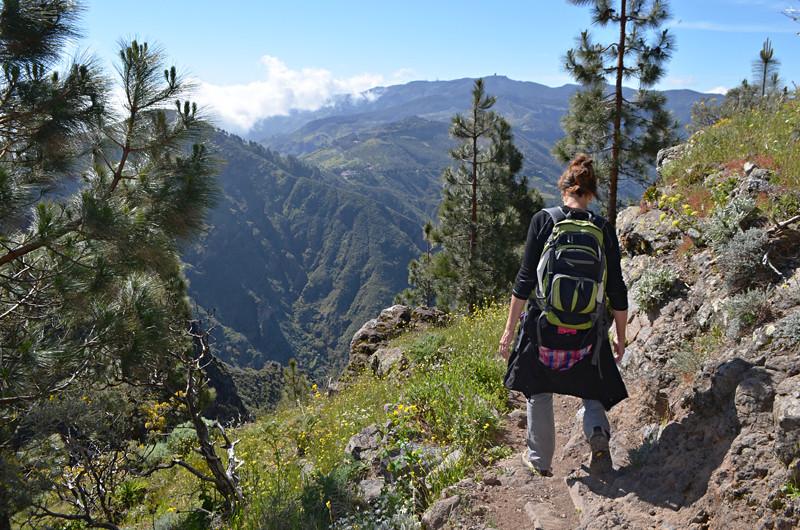 The ridge occupies a commanding position above the sprawling valley, so no real surprise when we reach a path leading to series of caves where pre-Hispanic Canarios once lived – the pubis caves, honestly. Maybe that’s not their official name, but some of the seven caves are decorated with triangular carvings said to depict the female pubis. They are no ordinary cave homes, this is an area associated with fertility and witchcraft.

Pubis caves? You’ve got to check something like that out. For a moment it’s touch and go as the rocky path appears to end at a sheer drop. It’s one of those leap of faith moments. Take a step into the unknown and hope… 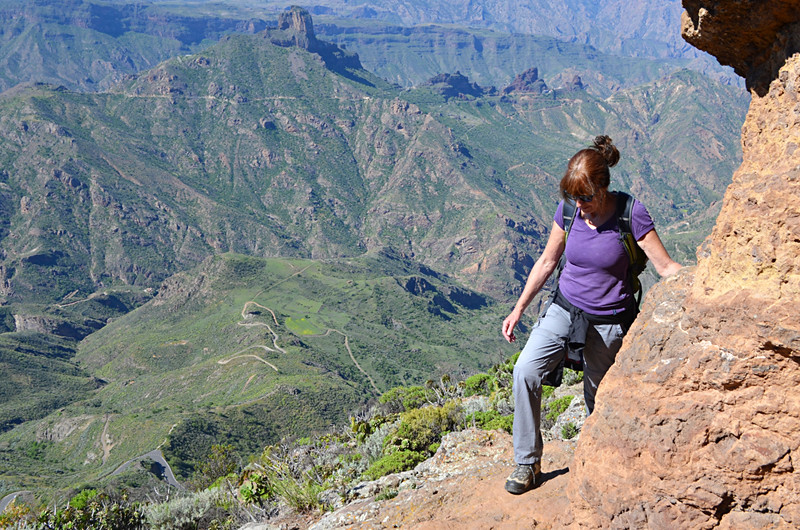 It’s another teaser. The caves, with their entrances blocked by grills, are okay but no matter how hard we peer into the dim interiors, we don’t spot any V-shaped etchings. Their location, however, is a wowser – a hidden troglodyte settlement fit for a king. Sitting on a stone throne high above the world does invoke an air of godlike superiority.

Way, way below us a narrow gash serpentines its way across the valley floor. It’s our return path and a reminder there are still a lot of kilometres ahead. It snaps us from our lordly reverie. 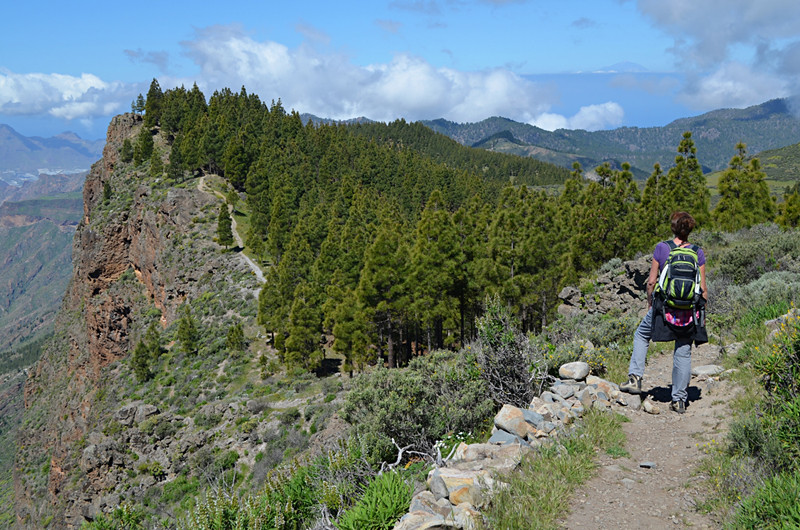 Continuing onwards we’re bombarded by a relentless assault of scenes which would be the gut-punching highlight of many walks. The Canary Islands never fail to amaze. If ever a destination was completely and utterly misunderstood and misrepresented by the masses it is this archipelago. In a way I’m glad; it means there are still many places where relatively few tread.

The signposting has been pretty consistent. But this is the Canary Islands and so it’s the law it has to go missing at some point. In this case it’s just as we reach what should be the final approach to Artenara. There are signposts, but they point in conflicting directions. Two point accusingly at each other as though they can’t agree ‘Artenara is that way’ says one, pointing at the other sign. ‘No it’s not, it’s that way’ says the other pointing back. 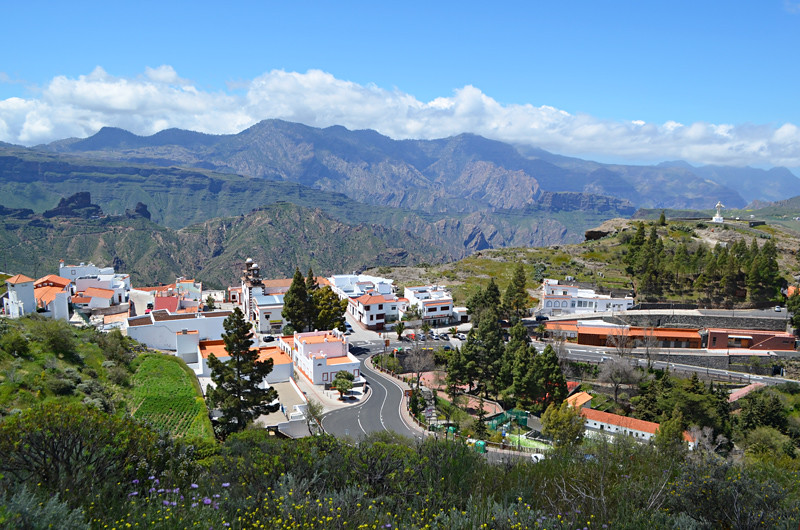 I ignore them, consult the map, and follow the advice of neither. The path we take leads through a gentle valley before, about a kilometre later, it emerges at a viewpoint with an industrial iron sculpture. Just below us is our goal, the cave village of Artenara – a surprising treat for already sated eyes. The village is tiny and pretty and sits in a dream of a position high above the Tejeda Valley. But that’s not what surprises. Scattered around are a handful of similar colossal sculptures, the most eye-catching of which is Christ the Redeemer, lording it above the village, arms outstretched. 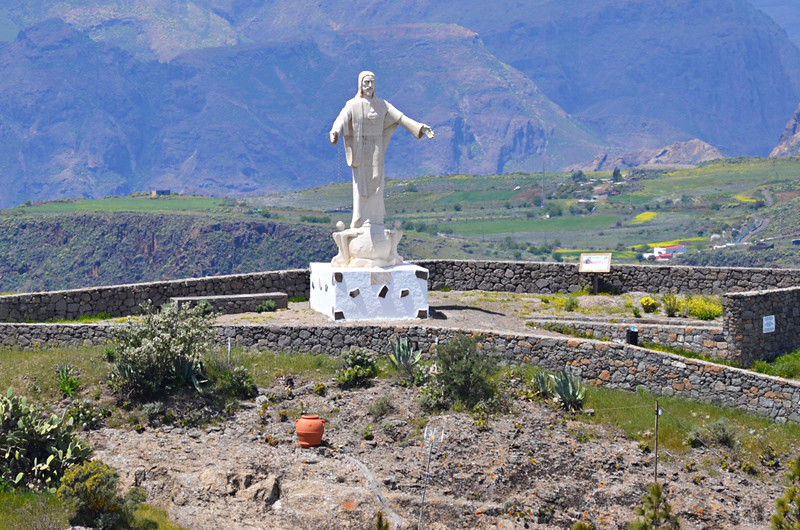 He’s welcoming us to what is a quite special place.

Who are we to deny his embrace? Especially as it’s lunchtime and right below his feet just happens to be a restaurant set inside a cave.

Gran Canaria, like other Canary Islands tagged with the mass tourism label, generally suffers from being viewed mainly as a sun, sea and beach destination… […]