Five minutes. That’s how long it took for me to decide I didn’t really like the Troia Peninsula, even though it has a dream of a golden sand beach stretching for 18km along the coast. 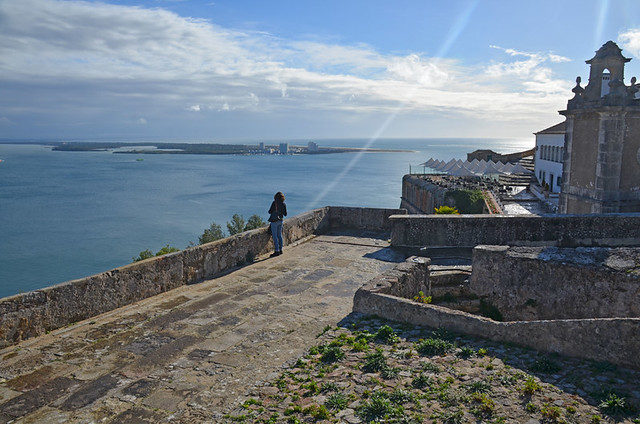 For months we’d followed the wake of the luminescent green ferries trundling across the calm waters of the Sado to the finger peninsula which acted as a scenic sea wall between the estuary and the Atlantic. Why it took us so long to actually jump on one to make the short trip from Setúbal I’m not sure. Possibly because we subconsciously knew exactly what the handful of smart looking apartment blocks at the estuary’s mouth signified.

On a sizzler of a day in mid May, when the Sado was a mill pond, we finally got around to finding out what Troia was actually like. 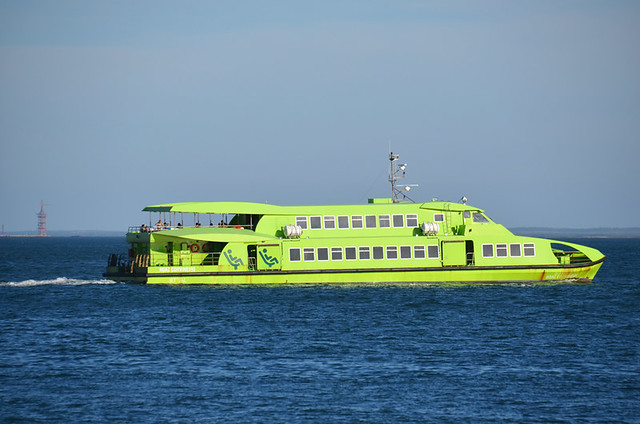 The ferry was a fifteen minute delight (€6.85 pp one way, sailing approx. every hour). Out of season there were only a smattering of other passengers, most were commuting. As commutes go, it was quite a spectacular one. Ahead, the Troia peninsula looked like a tree-covered atoll. To the west, the high lush hills (somewhat of a rarity in Portugal) of Arrabida National Park added their hefty scenic weight. Intermittently we passed tiny fishing boats, minnows compared to the cargo ships docked at Setúbal’s port behind us. In some ways there was a west African appearance about it. 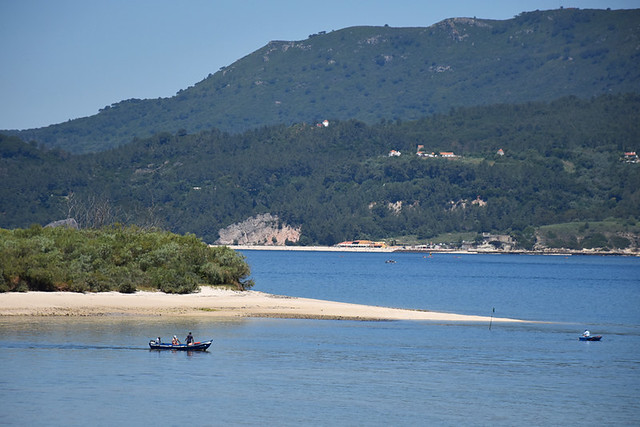 That notion changed as soon as we berthed at Troia. The exotic naturalness of the coast was replaced by a pristine development – a smart marina bordered by a neat boardwalk backed by plush apartment blocks and a swanky casino. It was all spotlessly clean… and virtually empty; a vacant film lot waiting for its seasonal extras. It made us think of the cult TV series from the sixties, The Prisoner, and was slightly unnerving. After the ‘down to earth’ working class charm of the city across the bay, it also felt completely false; purpose built for beach lovers, but not in a naff holiday resort aimed at British sunseekers sort of way. The shops lining the promenade weren’t filled with tourist pap, they were of the designer variety. Most were closed, signs in their windows promising ‘see you next summer’ in Portuguese.
At the far end of the resort, a wooden walkway led directly into the golden treasure which draws hordes of worshippers during summer months, the endless beach. And it is, to be fair, a spectacular sight to behold. 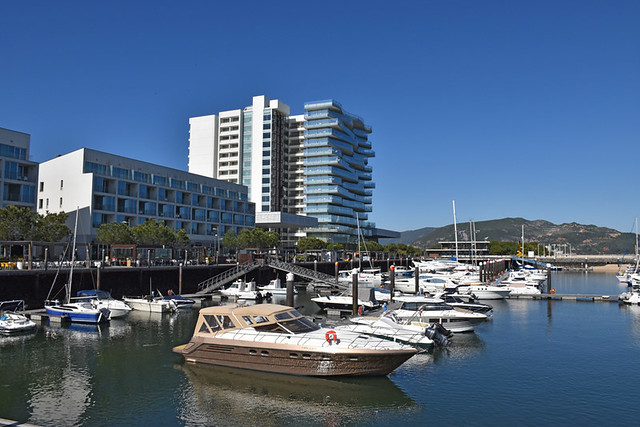 Thankfully, the blot of a resort is only postage stamp in size. A couple of hundred metres and we left it behind to follow what was supposed to be a marked walking trail – we’ve discovered such a thing is somewhat of a rural myth in these parts – leading deep into the more natural areas of the spindly finger. Within a few minutes sleek urbanity was replaced by a more appealing rawness. This was the Troia described to us by a local bank clerk who wild camped on the peninsula in summer months. Pines lined the banks of a lagoon populated by a variety of birds, ranging from hunchbacked heron to punky red-breasted mergansers. 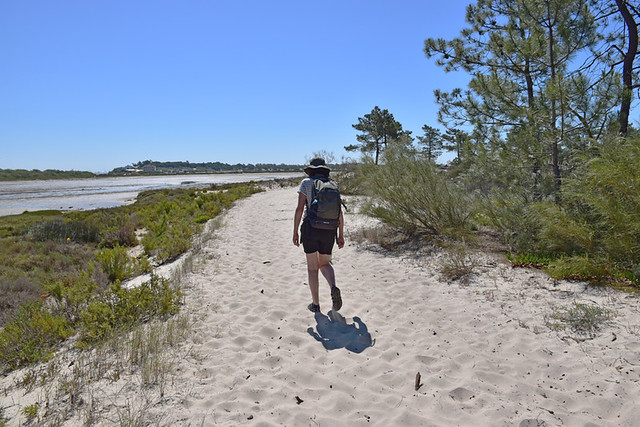 The five kilometre route skirted a sea lagoon to lead to Roman ruins; easy walking in theory. In reality, it was hard going. The path consisted of soft, muscle-sapping sand, the temperatures were touching 30C, and there was no shade. Halfway around the lagoon we reached the cool sanctuary of a wooden hide and took refuge from the sun for a while, watching a couple of fisherman wander the mudflats in search of who knows what. 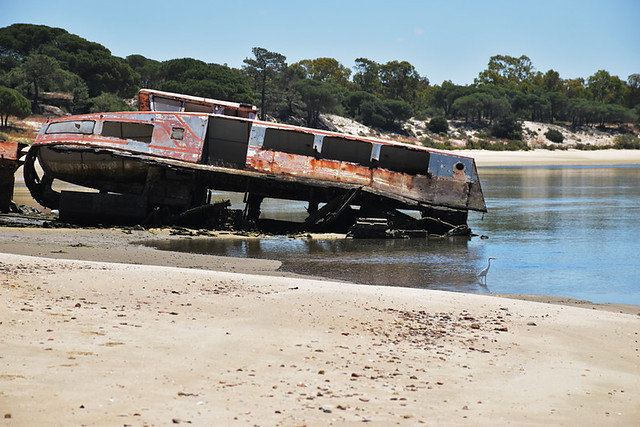 The second stretch of the route weaved past rusting, beached shipwrecks guarded by vigilant egrets and then a ruined mansion occupying a dream location at the mouth of the lagoon before we arrived at our goal. It’s hard to imagine now that pungent fish paste was once as valuable as gold, but back in the day garum was a precious commodity, used both for gastronomical and medicinal purposes. Troia’s ruins are what is left of what had once been the largest fish salting production centre in the whole Roman Empire. Queen Dona Maria of Portugal took part in the first excavations at the site and Hans Christian Anderson referred to it as the “Pompeii of Setúbal” (entry is €5, but only €3 if you arrive on foot or by bike – a nice touch). In the 1st century A.D. this was a thriving community consisting of the fish paste factories, baths, houses, a mausoleum, and a necropolis; a real place, as opposed to the soulless shell five kilometres along the coast. 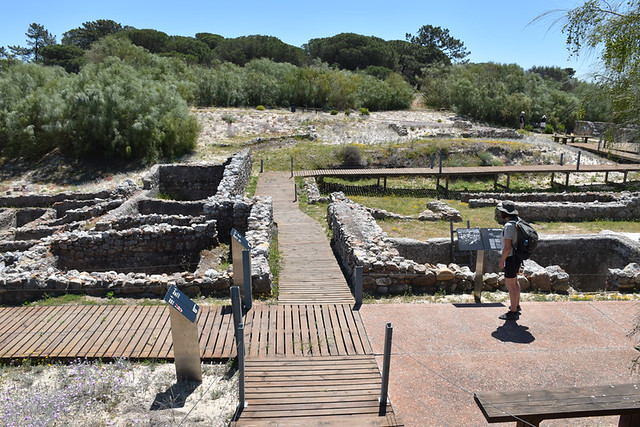 I wasn’t charmed by Troia the resort. Troia the peninsula is a different matter altogether. We’ve already planned our next visit, a mini road trip to explore this fascinating narrow strip of land in more depth.

“That bush is singing.” By this time I was beginning to contemplate looking around for a large stone and carving out all the things I think people should do… […]