Our paths and that of the birdman of Los Tilos crossed three times. Each one benefited us in one way or another.

We asked a forestry worker, quietly clipping away at bushes, if it was okay for us to leave our car on a rough patch of ground whilst we went in search of a waterfall hidden in the folds of a deep, narrow, damp ravine lined by giant ferns. There was something immediately likeable about the elderly man in a green tunic who smiled and gave us a reassuring wave that said it was absolutely fine. 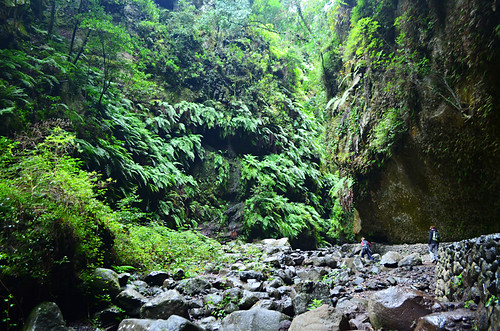 As we prepared ourselves for an explore of a lost world environment, a colourful and confident little bird hopped on to the wall near us to steal a scattering of yellow seeds.

We asked the forestry worker what the bird was. As well as a name – pinzon palmero – he rewarded our question with an unexpected demonstration of trust between man and nature. He held some seeds between his fingers and made soft chirping noises. After a few moments a succession of little birds with blue feathers and orange throats did their best humming bird impersonations as each hovered momentarily before gently taking the seeds from his fingers.

He knew them, they knew him. 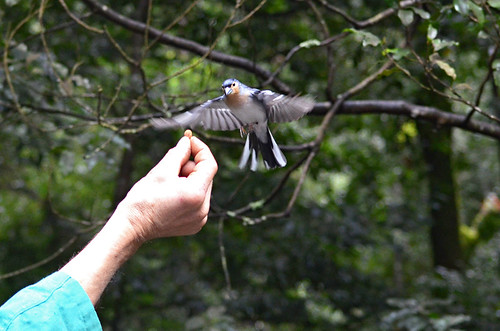 I managed to capture a grainy photo or two which he was clearly delighted with.

Strange calls from other feathered friends hidden somewhere in the dense canopy prompted us to ask more questions. Our benign birdman identified them – mirlo, grajas – with accompanying stories about each. We could have stood and listened to him all day, he was like a Disney construct – a gentle birdman of the forest.

But there was a route to find so we said our goodbyes and headed into the undergrowth. 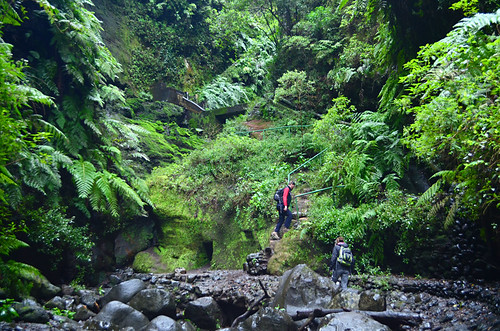 Thirty minutes later our paths crossed for the final time. Despite having three smartphones and at least four maps between us, none of the information to hand quite matched the reality of the terrain. We wandered up paths that led to dead ends and in directions we didn’t want to go before finally deciding to return back to our starting point.

Once again the birdman was there to lend a helping hand, pointing out our correct route which had been obscured by a tree and a misleading post. 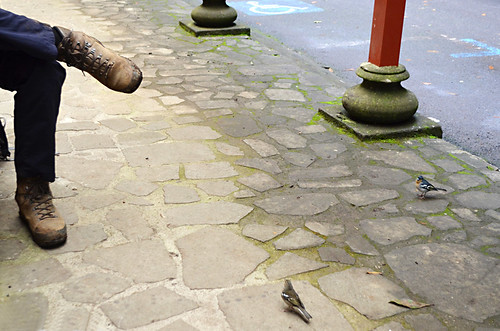 After a thigh-screaming ascent to a viewpoint overlooking La Palma’s wild Biosphere Reserve, a place which could still be the domain of creatures thought to be long lost, we retraced our steps and spread out overly generous picnics on wooden benches. As I sat, one leg swinging happily, savouring a slice of jamón ibérico, one of the pinzons gracefully landed on my boot and perched there without fear, looking hopefully at the food in my hands.

Whether that was normal behaviour for him, I couldn’t say. But I like to believe he did it only because he’d seen us with the birdman of Los Tilos and that had given us a stamp of approval.