It had been a few years since we’d stood looking down on the avocado coloured stepped terraces and palm groves in the upper reaches of the valley of the great king, or Valle Gran Rey to use its proper name. 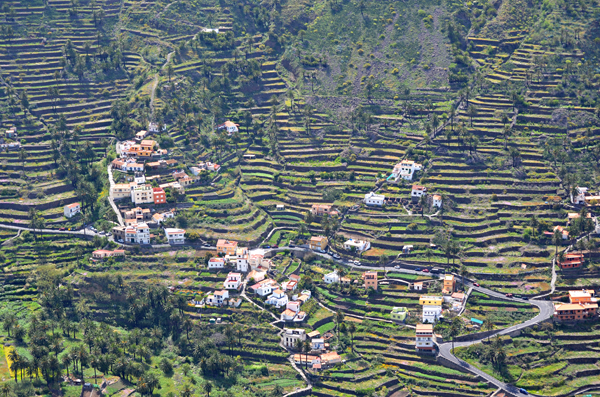 The view from the Manrique Mirador is one of my favourites in the Canary Islands; a vista which in the one shot shows why La Gomera is different from the other islands. There’s something just that little bit more exotic about the landscape which tumbles down valley below the viewpoint.

The scene had lost none of its impact since the last time I’d stood like a king of the valley surveying a green and very pleasant land. Sadly the Mirador café and restaurant had closed about a year previously, its lofty position above one of the best panoramas in the Canary Islands not enough to tempt sufficient visitors and locals away from the restaurants at the coast according to one local.

Even without a café to savour the view over a coffee, it’s an impressive introduction to La Gomera’s main tourist resort… if resort is the right word. Nowhere on La Gomera seems deserving of the term ‘resort’, and I mean that in a positive way. 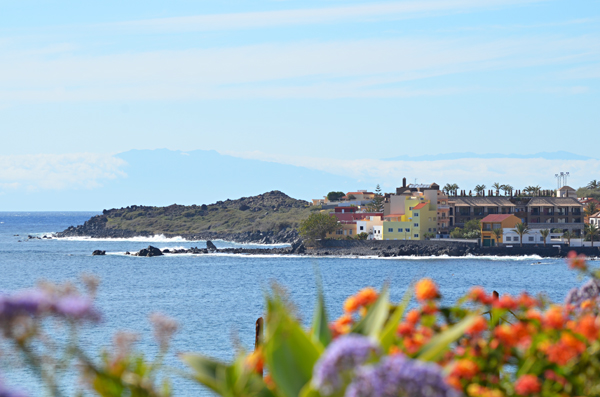 However, as resorts go Valle Gran Rey is quite unique in the islands. For a start there’s only one road in, snaking from the top of the island through a steep ravine all the way to the coast. Secondly, Valle Gran Rey itself isn’t one town, it’s made up of a series of barrios (neighbourhoods), each with a slightly different personality. Thirdly, if anyone is looking for the perfect place to log off, chill out and give their chakra a good cleansing, Valle Gran Rey would be an ideal place to do it; there’s a strong neo-hippy vibe throughout the place. You might struggle to find fake football shirts in its equivalent of resort tourist shops but you won’t have any problem finding tie-dyes or harem pants; both come in useful if you want to blend in with many of the residents. 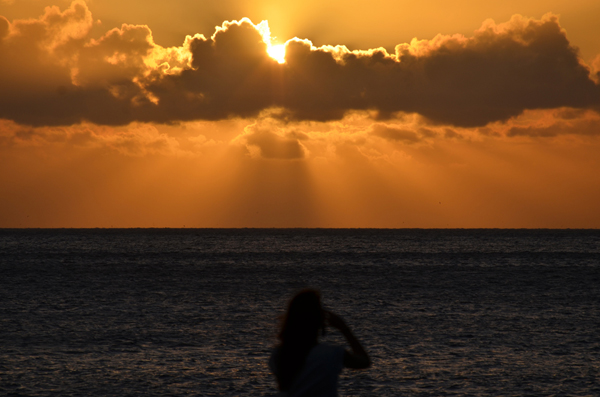 The Different Faces of Valley Gran Rey
Ever since our first visit nearly two decades ago there were three key ingredients which made Valle Gran Rey stand out from everywhere else on La Gomera – beaches, restaurants and bars. It had the most variety to offer in all three categories.

Although the approach road had been ‘developed’ since the last time we visited, much of the place hadn’t really changed.

La Playa
La Playa is the area which comes closest to having a resort feel; there’s a black sand beach beside a small promontory which is full of restaurants, shops and pavement cafés. There are more shops and restaurants in the streets behind the seafront promenade. It’s not big, but there’s a good choice of places to eat, ranging from traditional and Italian to Indian and Malaysian. Like all areas of Valle Gran Rey, vegetarians are well catered for. In fact, it’s one of the best resorts for vegetarians in the Canary Islands. 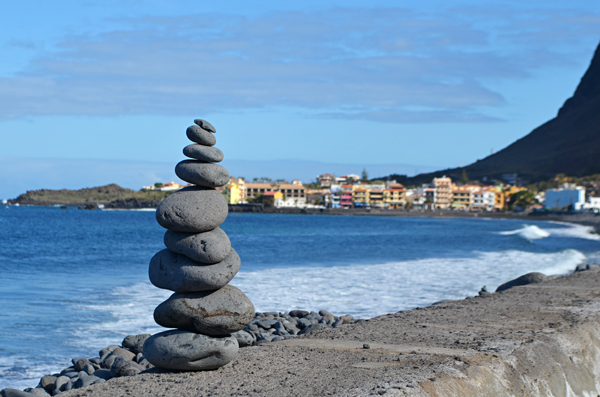 Menu prices in La Playa are considerably higher than we’re used to – more aimed at tourists than locals. A tapas lunch at Avenida consisting of fried aubergine, almogrote and crispy chicken in a cheese sauce with a couple of beers came to €30, almost double what we’d normally pay in a traditional area. Saying that, everything was nicely presented and very tasty. Plus it was a great spot for people watching.
At night we popped along to the packed out Gomera Lounge, a rather swish and stylish hub of live music including folk, jazz, blues, reggae and world music. We got a local band singing mainly Spanish pop to an enthusiastic and eclectic audience which spanned various ages and fashion styles. It was certainly entertaining even if the singer wasn’t quite as good as she thought she was. 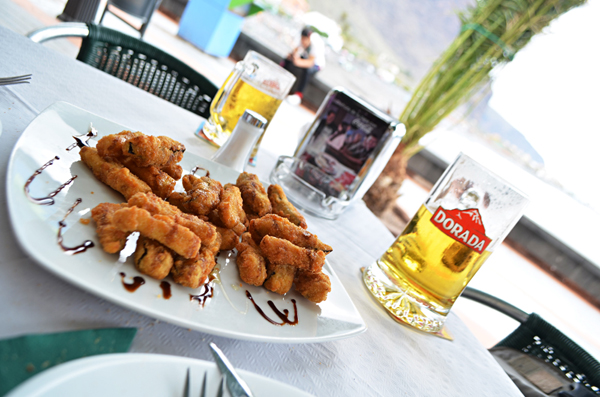 Borbalan
Borbalan sits a short distance back from the sea, tucked into the base of the cliffs which partly give Valle Gran Rey its scenic setting. Traditionally an area of banana plantations and fruit orchards, Borbalan had changed most of all the barrios. There were more shops, bakeries, cafés/restaurants and apartments since we last visited. There are still allotments and fruit trees but the feel is of a tidy, tranquil and quite upmarket area frequented by both residents and visitors. 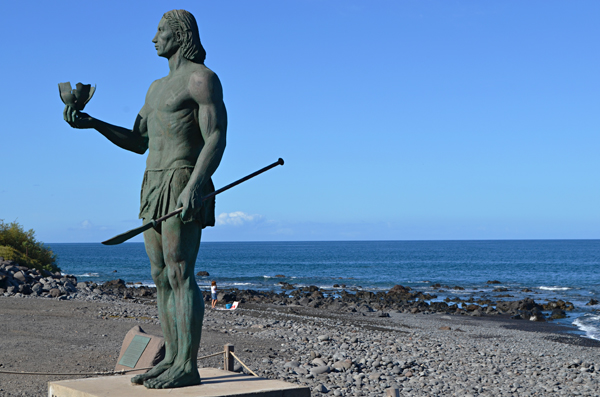 La Puntilla
I’ve always liked this stretch of coast linking the main resort area with the port; there’s a higgledy-piggledy feel to the way the road casually meanders along the coast passing mini bays with sheltered pools. Valle Gran Rey’s coastal barrios are spread out and La Puntilla is a good halfway point for being able to access both extremes. But there’s such a nice scene in the handful of bars and restaurants beside the Gran Rey Hotel that it’s tempting to wander not too far at all. A few places have musicians who seem more like they were casually jamming than performing, something which perfectly fits Valle Gran Rey’s chilled out personality. In one small area there’s Middle Eastern, Italian and seafood restaurants. We’d eaten at La Garbanza, specialising in Lebanese cuisine, in the past and ended up there again as we met up with a vegetarian friend who lives on La Gomera. 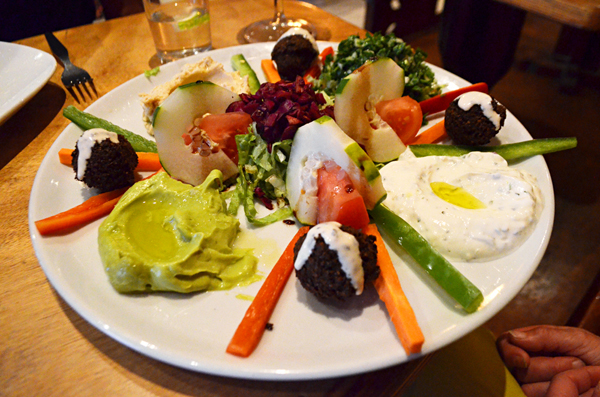 It was decent enough food, again a bit on the high side for what it was, but they needed prompting to cook a main course as after a certain time the waitress seemed a bit more interested in socialising than serving. We regretted not insisting on going to Salsa, a restaurant further along the coast road with an enticing menu we’d spotted earlier. Our Gomeran friend has since eaten there and given it glowing reports. La Puntilla is also home to Hautacuperche, a bronze statue of a Guanche freedom fighter. 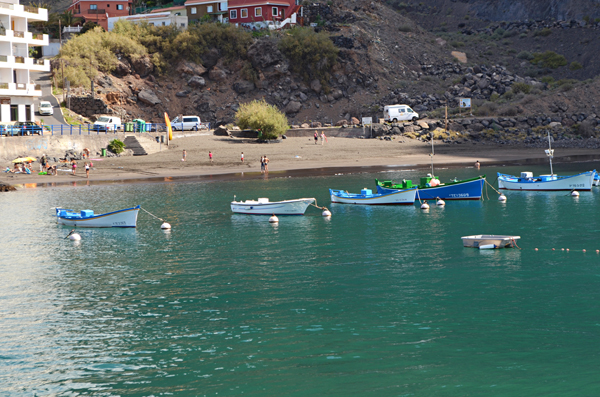 Vueltas
My favourite area of Valle Gran Rey, parts of Vueltas could easily be overlooked. The harbour tucked under sheer cliffs is the obvious part to Vueltas and its seafood restaurants attract visitors. Apparently rays are a common sight in the harbour waters. But the most charming part of Vueltas is to be found in the narrow lanes which lie behind the seafront. It’s here where many of the artisan shops, arty bars and cafés and good restaurants are located and prices are more wallet friendly than in La Playa. Whenever we visit we usually end the night in one of the bars in Vueltas. This visit we rounded off the evening listening to chill out sounds at Cacatua. The bar, set in an old townhouse, doesn’t liven up till after midnight and is a haunt of Gomerans, Valle Gran Rey’s quasi-hippy residents and the more adventurous of visitors. Vueltas feels more like a mini bohemian centre rather than a resort and it’s that ‘real place’ vibe which makes it our favourite out of all the Valle Gran Rey coastal barrios. 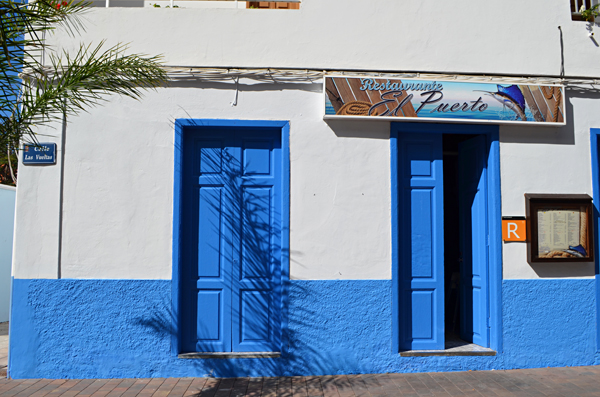 It’s these different faces of Valle Gran Rey which give it an appeal to people with wildly varying tastes. Some visitors like it because they see a tranquil beach resort that’s also a good base for exploring La Gomera, whilst others like it because it has a non-conformist personality which appeals to younger independent travellers and neo-hippy travellers.