Some people walk the Camino for spiritual reasons. Some seek adventure, camaraderie, and possibly even life-changing experiences. Others do it simply because it is there. We did it because it was work … and because we enjoy walking routes which involve us taking to the trail day after day. In May 2021, in the midst of the Covid pandemic, we set off from our cosy bubble on a sheep farm south of Lisbon with the intent of walking the Camino de Santiago, starting at the Portuguese/Spanish border. 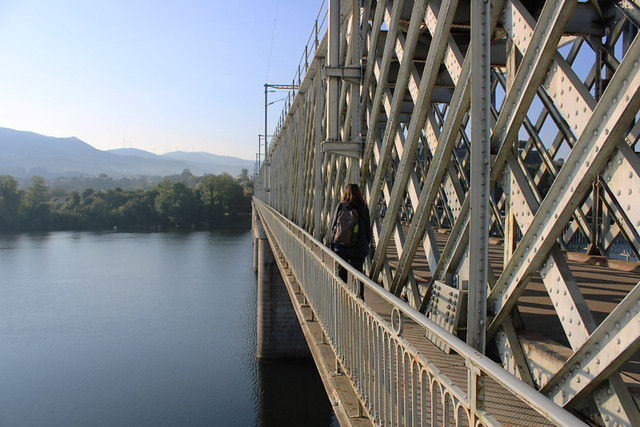 Stage 1: From the border to O Porriño

A TV news crew awaits us as we cross the iron bridge connecting the sleepy Portuguese town of Valença with its wide-awake Spanish neighbour Tui on the opposite side of the river. Tui is wide-awake because it’s an hour ahead. This is a bridge on which you can travel back and forward in time.

The beam on the face of the newsman slips into the River Minho when he hears our English-speaking voices. It’s the first day for months the border between the two countries has been open, and he expected a Spanish or Portuguese local to come ambling into camera shot, not two British hikers. We’re waved away, our opportunity to be stars of Portuguese TV snatched from us because we are the wrong nationality.

Not only is there an absence of locals, there’s also a noticeable lack of fellow pilgrims as we pass our first milestone featuring a yellow scallop shell. 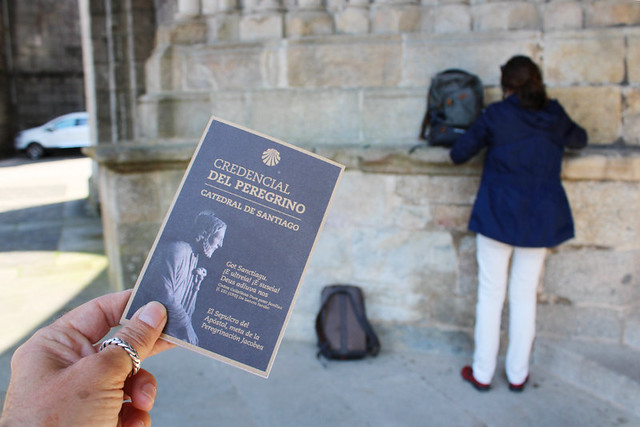 Stage 2: From O Porriño to Saramagoso

In some ways, the Camino is an elongated ghost town. Locals go about their business with relative normality, but a lack of pilgrims has devastated the industry which has grown up around their passing. Many restaurants, bars, cafés, albergues, pensions etc. are closed. Finding places to add stamps to our credencial (the Camino passport) proves problematic.

We pass a tiny chapel barely bigger than a garden shed where a DIY pilgrim stamp had been left on a wooden pew. It seems appropriate that, on a pilgrim’s way, a religious edifice is our saviour. 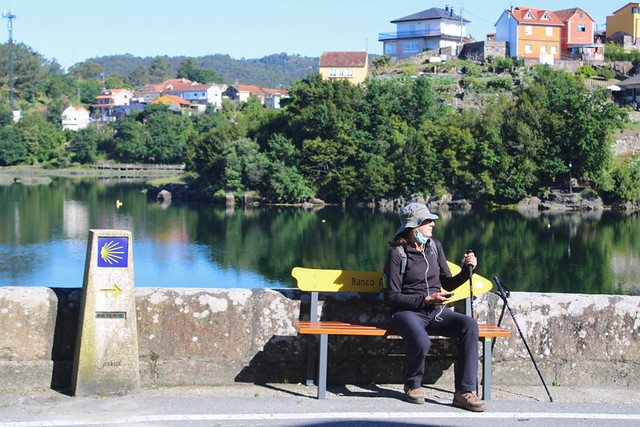 Stage 3: From Saramagoso to Pontevedra

The mask is a nuisance. It’s not quite as bad as having iron shackles around the legs, but it’s still an impediment when walking long distances. Spain’s rules about it being compulsory outdoors in urban areas, even hamlets, means there’s more mask-wearing than we’d like. On an optimistically sunny morning, the old bridge at the oyster-loving town of Alcalde would make for a great shot to feature in a brochure, especially with a pilgrim on the ‘pilgrim bench’ in the foreground … but not one wearing a face mask.

A combination of lockdown restrictions and walking on tarmac over long distances (it’s the Camino, this is unavoidable) has left our feet sore and mutinous. Andy’s trusty boots, which have safely helped her over far more difficult terrain, are now peevishly pinching at her toes to the extent she’s hobbling.

Luckily, and essentially, we have a rest day in the heart of the historic quarter of Pontevedra, an instantly loveable city we’d never heard of previously. Andy buys new boots and holds a virtual launch for  her book The Banana Road from the luxurious comfort of the Parador de Pontevedra. 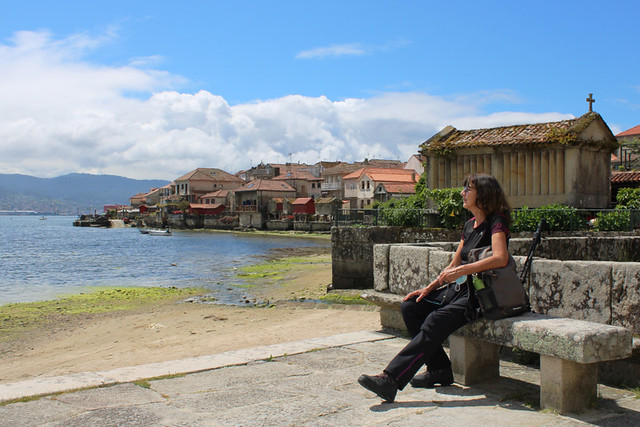 Stage 4: From Pontevedra to Armenteira

With feet rested and raring to take to the Portuguese Way again, we cross the river and are on the outskirts of the city when a woman in a car draws level and rolls down her window.
“Que alegre a ver peregrinos,” she smiles, eyes welling.
How happy I am to see pilgrims. It hits like a punch to the solar plexus. Why there have been so many smiles. Why there have been people hanging out windows to shout “hola”. Two pilgrims on the path represent the beginning of a return to normality.

We leave the main Camino to follow the less well-known Variante Espiritual through the Rias Baixas, and the scenery moves up a gear. Pausing for lunch on a bench below a stone cross in the fishing village of Combarro on the banks of the Pontevedra River, we agree it’s the best stage of the Camino we’ve walked so far. 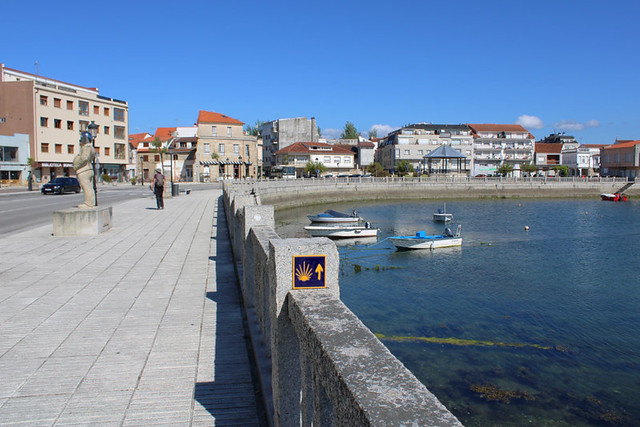 After descending from a monastery in the forest, keeping pace with a roving stream which dances past waterfalls and ancient mills, we follow the gentle curves of the River Umia, declaring THIS stage to be the best so far.

The day ends with us crossing a pedestrian bridge to arrive in Vilanova de Arousa, our base for the night. Or it would be if the town hadn’t just been put back into full lockdown due to a Covid outbreak. Vilanova really is a ghost town.

A taxi backtracks us to our previous night’s accommodation, which is no hardship as it’s a gorgeous looking quinta with a great restaurant. 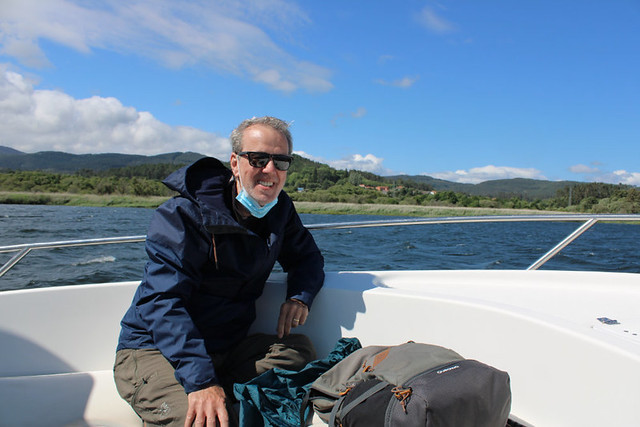 Arriving back in a seemingly deserted Vilanova ships us right back to the surreal and scary days of lockdown part 1 in early 2020. We hover nervously at the harbour, waiting for a pilgrims’ boat to take us on a quite unique fourth stage. We’re the only passengers as we chug upriver, passing mussel platforms, stone crosses on islets on the Ulla River, and a Viking longship, to re-join the main Camino de Santiago at Pontecesures. It’s an invigorating two-and-a-half-hour voyage, which we decide is definitely the best section of the Camino we’ve (not) walked.

We overnight in Lestrove. Its neighbour is the small town of Padrón, as in pimientos de Padron. This excites me, until a waiter at the Pulpería Rial informs us the savoury peppers are not in season. I wasn’t even aware they had seasons. The excellent octopus combined with zingy wine served in a cunca (traditional Galician wine cup) compensate. 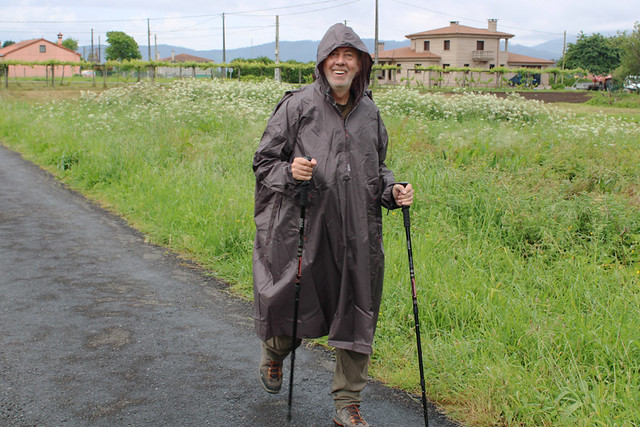 The anticipation of reaching Santiago Compostela washes away the kilometres on our lengthy final stage, as does the rain when we draw closer to Spain’s equivalent of Manchester. After a week of warm sunshine, which was predicted to be a week of unsettled weather, we finally get to don ponchos, which keep us so cosy and dry it feels and looks like we’re walking in mobile tents.

The Camino we follow magically bypasses most of Santiago’s sprawling outskirts, keeping our surroundings green and tranquil until we emerge into urbanity not too far from the historic centre. 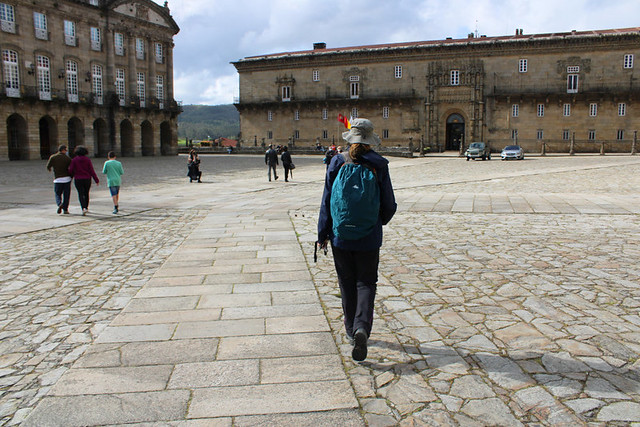 The last time we entered Santiago de Compostela, we did so on the crest of a wave of pilgrims, homing in on the joyous sounds of emotional emancipation coming from Praza do Obradoiro. This time there is no weary but exuberant army besieging the square, only us.
Ironically, for a city whose heart is normally fuelled by a constant flow of pilgrims, we feel out of place among the smartly dressed domingueros. We enter the square and cross to its centre.
“That’s it, we’re done,” I remark matter-of-factly to Andy, with all the emotion of an android.
There’s no hugging, weeping, or big cheesy smiles to chase away the gloomy clouds. Despite having notched up nearly 200km, there’s not even a great sense of achievement.

There have been many memorable highlights, and we’ve enjoyed walking day after day through the Galician countryside. Being the only pilgrims has also been an interesting experience. But the quiet Camino has taught us one thing. It is all about the people who travel it.

Without fellow pilgrims the Camino is just another long-distance walking route.

The seven marvels of Portugal

A wee bit of research uncovered it was a competition which had been held every year since 2007, each year involving a different aspect of Portugal’s many natural and human-made attractions. It was like finding a direct insight into a ‘best of’ the country as known by residents. […]