Over the last couple of weeks, I’ve written quite a bit about snow breaks for non-skiers. By now I should be weary of trying to describe wintry scenes using numerous different words, wishing I was writing in Inuit as they have something like 50 different words for snow. I’m not. Instead, it has made me yearn to visit somewhere the land is buried under a crisp white duvet.

I’ve had a desire to ski down glistening white slopes ever since seeing On Her Majesty’s Secret Service at the Regal Cinema in Rothesay on the Isle of Bute. However, I’ve still to attach a pair of long sticks to my feet, so I can confirm from first-hand experience you don’t need to know how to ski to enjoy snow resorts. 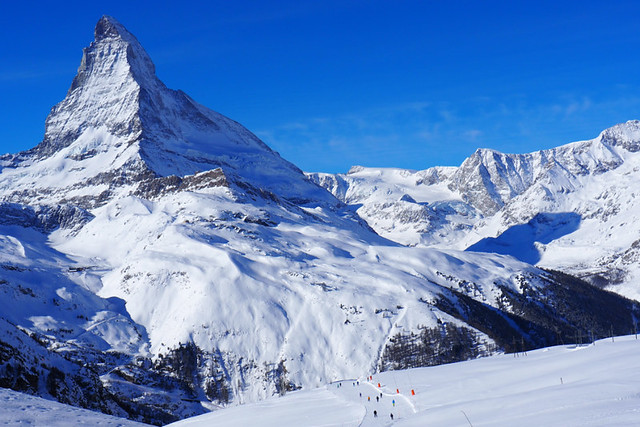 Even unappealing urban landscapes are transformed by a generous dusting of white powder, so views which already slot into the feast-for-the-eyes category are elevated into something quite, and I don’t apologise for using this word as it’s the one which always springs to mind, magical. 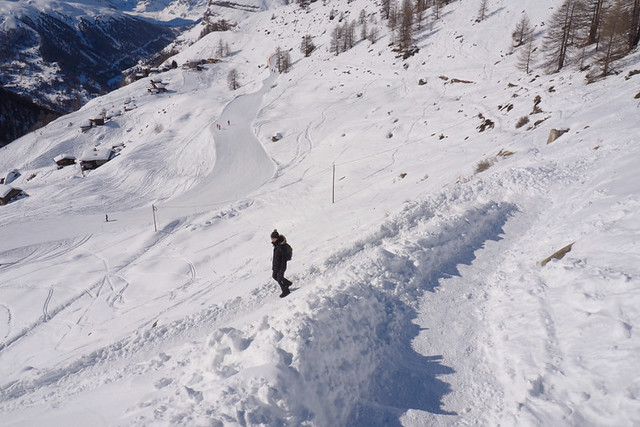 2: Walking in the snow

I thought it would be difficult. I thought I’d be slip-sliding my way from point A to point B. If anything, I found walking in the snow easier than walking in some snow-less environments (I’m talking about you, tree-root ridden and leaf strewn forest paths). Either paths are flattened, or the snow is so deep that it’s like walking on a crisp cushion. As most people are in snowy destinations to ski, it’s often just you alone with nature on these paths. After all, the song is about ‘walking in a winter wonderland’ not skiing.’ 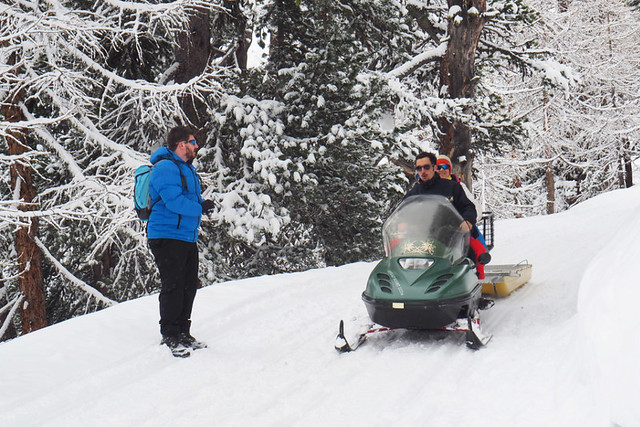 You don’t need any skills to be able to scream down a slope on a toboggan, apart from knowing how to stay on when there’s a corner. For anyone after some hi-octane activities, there’s usually something on offer. In Zermatt, we were ‘accidentally’ given speed toboggans. When I wrote ‘scream down a slope’ I meant it literally. But it was a blast. There’s no photos of us tobogganing, so here’s another exciting way of getting around. 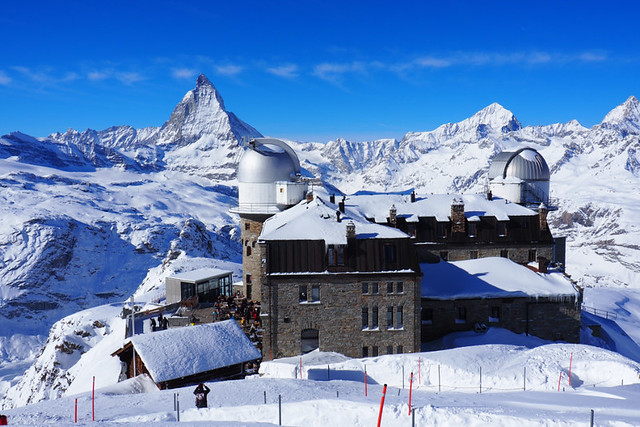 Snow breaks generally involve mountain scenery, and where there are mountains there is usually at least one construction high on a hillside somewhere which resembles a Bond Villain lair, probably because it has been used as a setting for one. As well as firing up the imagination, there are other reasons for visiting these lofty places – views, bars, restaurants, shopping, hotel, cheesy ice sculptures in ice tunnels etc. 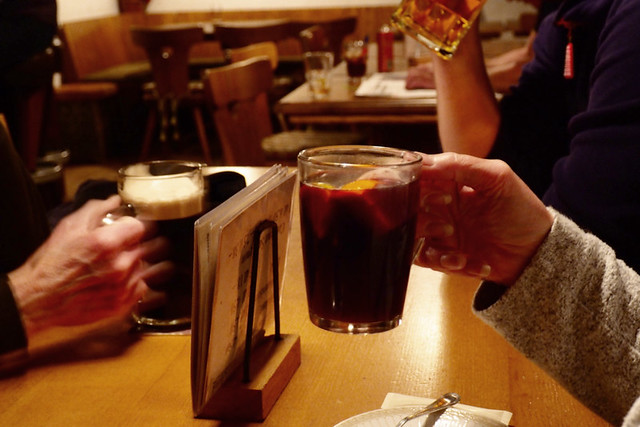 If there’s one thing winter snow destinations do exceptionally well it’s having lots of places for a bit of R&R, especially halfway up mountains or in clearings in the forest. Baby, when it’s cold outside there are few things as welcoming as a roaring log fire, and the Christmas-card-cover lodges you find in snowy location are experts at creating cosy environments to get to know the local booze. 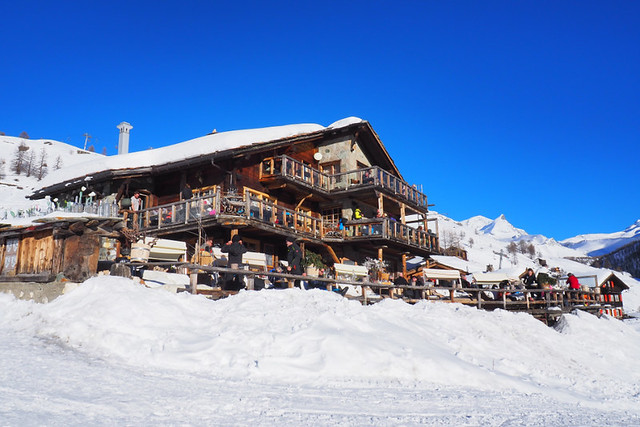 6: But it’s not always cold outside

The weirdest thing is that it’s not always cold, even when temps are well into minus figures. When there’s not a cloud in the intense blue sky, the sun does its best to give a warm(ish) hug, making outdoor terraces as popular as indoor. It messed with my mind a bit to sit on a terrace when it was -7C and have to take my jacket off because I was too warm. 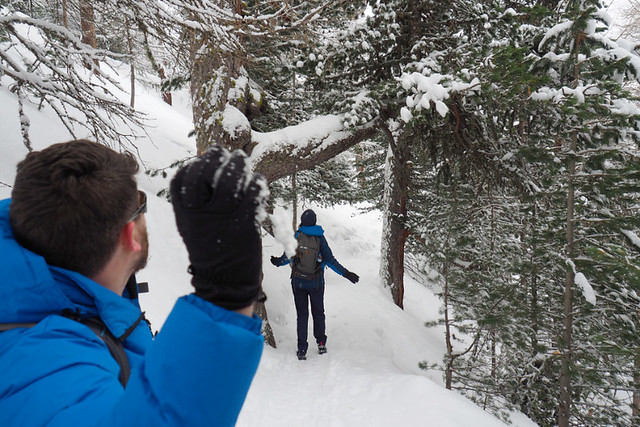 It’s something we’ve all known since we were children. That sense of wonder snow brings when it falls never goes away, nor does the fun of a snowball fight, bumping a tree as friends walk under it so they are bathed in a frosty downfall, stepping into a snowdrift that comes up to your chest, or making silly butterfly shapes in the deep snow with your body. 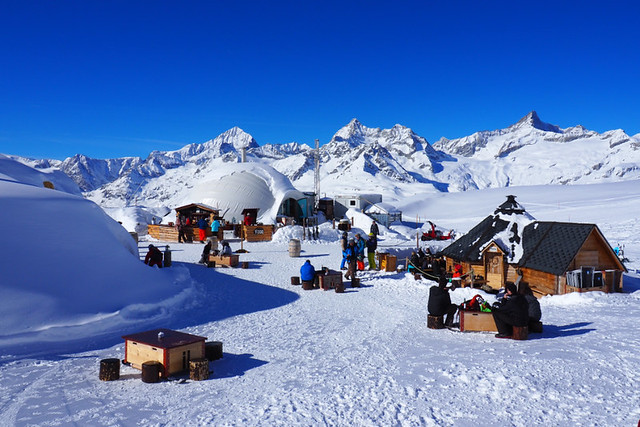 We love the peculiar oddities you find in different destinations when you travel, the little things that glue themselves to the memory. In Zermatt, it was a walk to an igloo village. Sitting sipping a hot coffee outside an igloo with views of the Matterhorn reflected in the sunglasses was quite the coolest thing. I now have drink in an ice bar, go on a torchlit stroll, and captain a team of huskies on my snow quirk list. 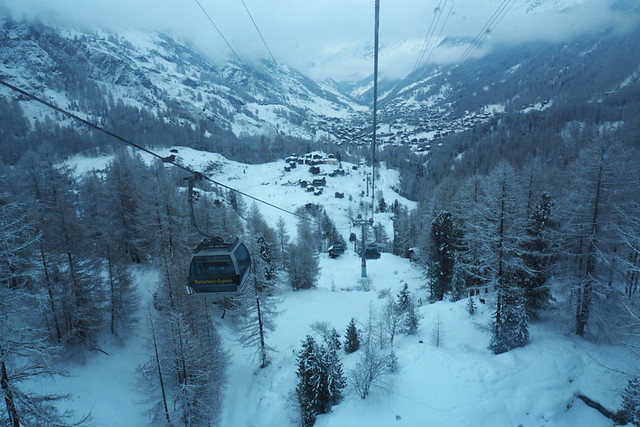 9: Getting about in style

Due to the nature of wintery landscapes, getting around snowy worlds is an interesting and fun activity in itself. We’ve notched up panoramic rail journeys, trundling up hillsides on funiculars and, my personal favourite, silently gliding across a silent white world in a cable car cabin. One lasting memory is of noting just how many animal tracks patterned the white carpet below during one early morning ‘glide.’ Forests must be busy places after dark. 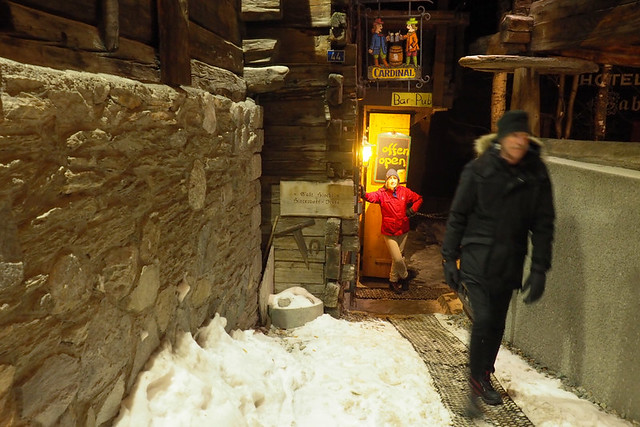 It’s called après ski, but there’s no rule to say you have to have actually done any skiing to enter a bar to relax and socialise after a cool day on the slopes. Clinking glasses in a convivial bar is a satisfying way to toast the end of a day enjoying the white stuff, whatever you’ve been doing. And there are great bars to indulge in some après snow. One of the hotels I’ve been writing about had an aquavit bar in what was the former goat barn. Another was also home to the village inn, a bar which, according to their website, was frequented by “…unconventional thinkers and fruitcakes…” among others. That description alone would have me booking in.

And there was no mention of skiers.

February 17, 2019 Jack As we walked out, Europe, Hiking, Switzerland, The Destination, Zermatt 0