We had seen José Malhoa’s painting ‘Fado’ all over Lisbon and now, as we entered Maria da Mouraria restaurant and Fado house it was there again, filling one wall of the tiny house. But there was a distinct difference between this version and the one we’d seen on tiles, posters and  doorways of Fado houses in Alfama and Bairro Alto. Depicting a male Fado singer playing a Portuguese guitar and to his side, a woman in a scarlet skirt and off-white camisole, slumped across a table, her head lolled back, one foot sprawled across a stool and a cigarette in her fingers. Only this time, the woman’s left breast was completely exposed.

It was a fitting homage to the person whose home we had just walked into, Maria Severa, prostitute, and Lisbon’s first female fadista. 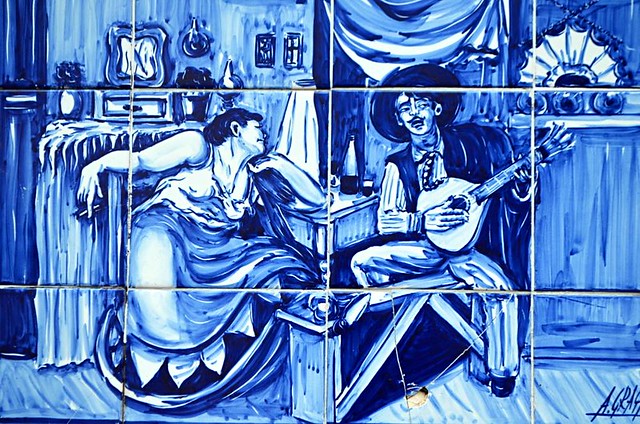 Cradled in the poorest quarters of Portugal in the early 19th century, Fado (meaning ‘fate’)  was the mournful lament of sailors, bullfighters and prisoners and found its voice in the ports, the brothels and the ragged back streets. Originally the preserve of men, Fado legend has it that the prostitute Maria Severa had a beautiful voice and that when the bohemian, bullfighting aristocrat Count Vimioso heard her sing, the two began a passionate love affair. Living and working in this tiny house in the back streets of Mouraria, Maria Severa died at home in 1846 at the tender age of 26 years and her home, like the neighbourhood around it, fell into decay. 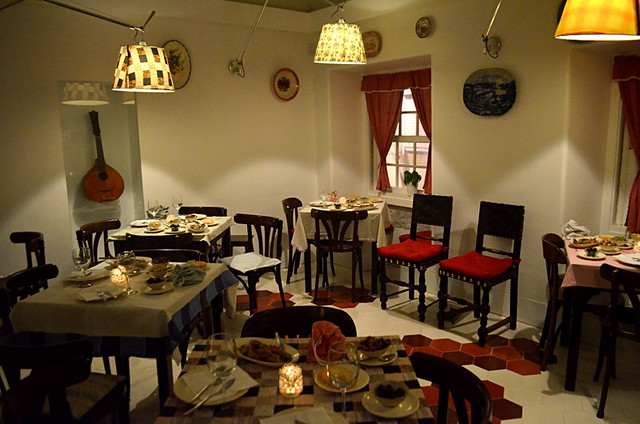 Two years ago the Mayor secured funds for the renovation of the Mouraria district, including the former home of Maria Severa. It’s now a hip and upcoming neighbourhood where, in Maria’s former home, you can hear authentic Fado without the tourist groups, the minimum spend or the inflated price tags for substandard food. It’s a pearl of a place.

At 8.30pm on a Wednesday night, we’re the first to arrive and are able to bag a cosy little table with a good view of ‘the stage’ – two stools next to the window. By 10pm, all the small tables are occupied and most of the diners have finished eating. The lights are turned off, leaving only the flickering candlelight from the tables and the soft glow of street lights coming through the window. Two young men take their places on the stools, one with a Portuguese guitar which is shaped a bit like a mandolin with a long neck and tear drop shaped body. The other with a classical guitar. 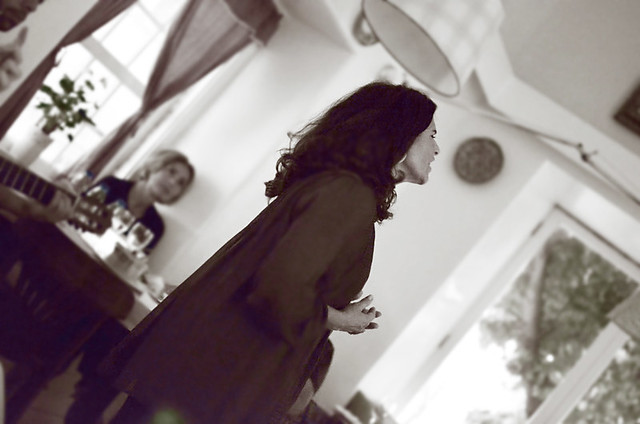 As the guitarists tune up, a woman who has been dining with friends at the next table, stands up, and accompanied by the intricate top notes of the Portuguese guitar and the gentle strumming of the classical guitar, begins to sing. At first her voice is soft and gentle, ebbing and flowing with the movement of her body as she sways to the rhythm of the music. As the song gains momentum, so too does the masterful fretwork of the Portuguese guitarist and the soulful voice of the singer. Only the applause breaks the spell of the lament. 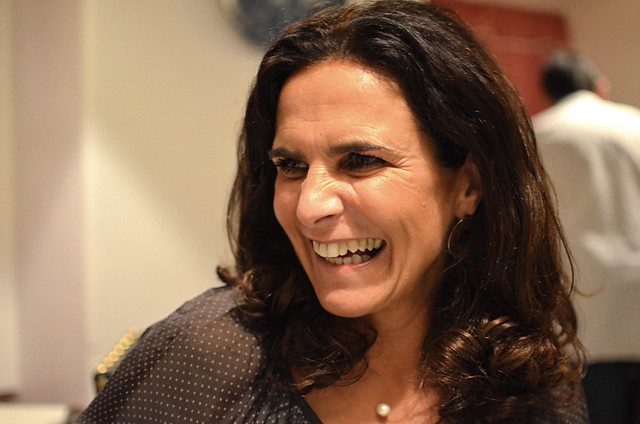 A sociologist for a transport engineering consultancy company by day and fadista by night, Margarida Soeiro has been singing Fado all her life and speaks about the songs and the music as if it is a vital part of her emotional and physical wellbeing.
“I could do yoga,” she laughs. “But I sing Fado instead!”
Margarida tells us about the young guitarists who are sharing the stage tonight. Marco Oliveira is one of the most respected classical guitarists and Fado composers of his generation.
“Marco has a beautiful voice and is a talented fadista,” Margarida tells us. “It will be really good for you to hear him sing”.
The talented fingers on the Portuguese guitar belong to Ricardo Rocha, the 32 year old grandson of acclaimed Fado guitarist Fontes Rocha. Also a fadista and composer, Ricardo has been playing Fado since he was 8 years old and accompanying fadista performances since he was 14 years old.
Performing at different venues during the week, Margarida sings here every Wednesday. “This is a very special place for me,” she says. “To sing here, in the home of Maria Severa where the female fadista was born, that is a very special thing.” 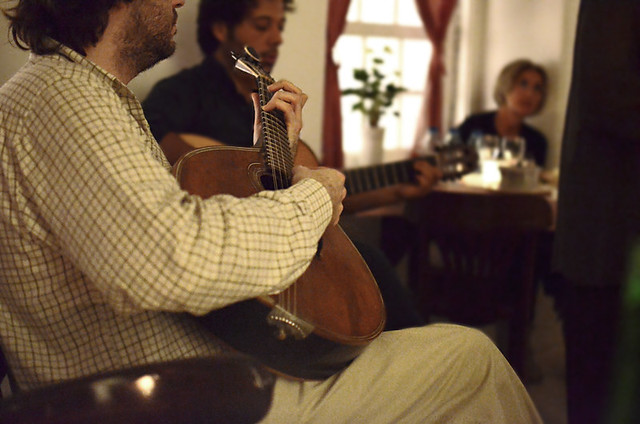 When the lights dim for the second time, Margarida rejoins her friends at their table and only Marco and Ricardo take to the stage where, for the next three songs, Marco’s mellifluous singing and Ricardo’s masterful playing keep us enthralled.

I look up at the adaptation of José Malhoa’s painting again and realise the woman’s head is lolling, not in an inebriated stupor, but in rapt pleasure. I look down at my blouse – just to check.

What to expect in Maria da Mouraria Fado house
When we arrived, each table was already laid out with several cold starters (petiscos) and a small floral bag containing fresh bread. The waiter explained that we could choose which, if any, of the petiscos to keep and which to return. There was a small selection of hot starters should we prefer, and a small menu of main courses, including the evening’s special, from which we could order. 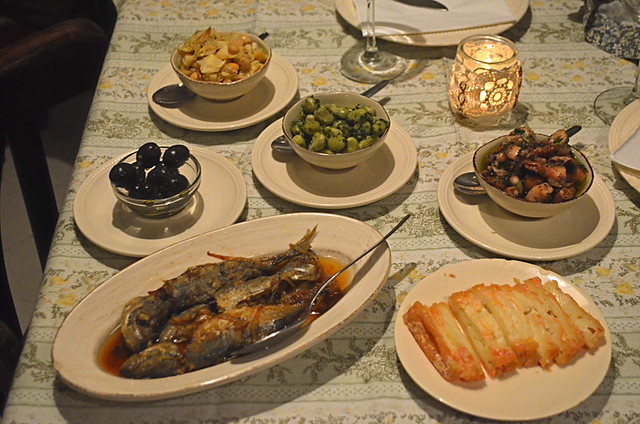 It’s a small, traditional room in a small, traditional Portuguese house with dining capacity for just 20 people so booking is sensible if you want to eat. There’s no minimum spend and you’re not obliged to dine but if you’re just coming for a drink and to listen, leave it until later in the evening to arrive as priority will be given to diners.

Dinner is from around 8.30pm to 10pm which is when the Fado performances begin. Each set is quite short (20 minutes) with a break in between. If the house is full, the music can go on until, well, “late” was as precise as the waiter got.

How much will it cost?
Many Fado houses in Alfama and Bairro Alto either charge an entry fee of €20/€25 per person or a minimum spend of similar. You can expect to spend around €50 to €60 per person for the evening including drinks. 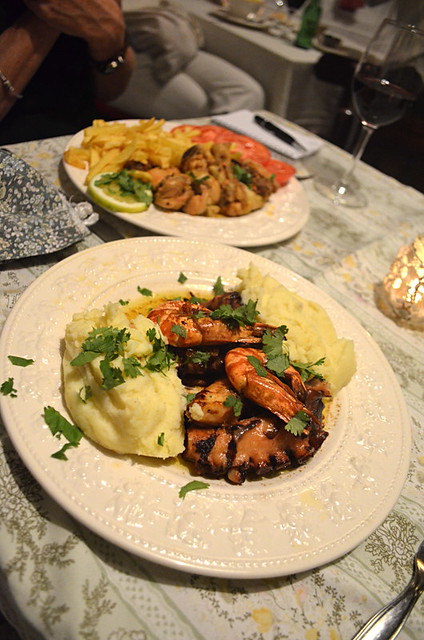 At Maria da Mouraria there is no entry fee and no minimum spend. The couvert (bread, cheese and olives) is €8.50; starters/petiscos range from €4.50 to €14.90; main courses average €16. The pick of our main course choices was Jack’s octopus with mashed potatoes, which was excellent. I had the garlic chicken and wished I’d had the octopus. House wine is €12.90 a bottle.

We had the couvert plus one additional petisco, a main course each, house wine and two bottles of water and the bill came to €60. The Fado performances were priceless.