From the moment I dipped my warm bread into the creamy amanteigado cheese I was sold. And that was at the couvert stage.

The Tasca da Esquina
You’re not likely to accidentally stumble across Tasca da Esquina. It sits on a corner (hence the name) at Campo de Ourique, an area of Lisbon built on what was once farmlands just outside the centre of the city. You can travel there on the 28E tram from Martim Moniz. We took the metro to Rato and walked from there, passing through the Jardim de Estrela and in front of the Basilica, both of which proved a distraction. The Basilica because it looked splendid and regal lit up at night and the gardens because we were stopped in our tracks by the sight of people dancing on the park’s bandstand in total darkness. 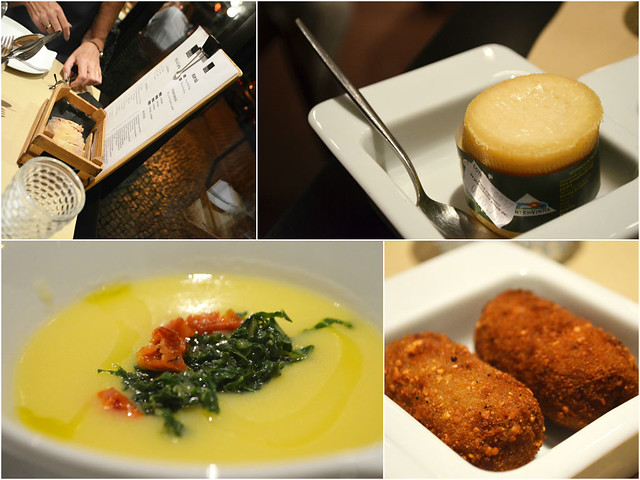 Despite the distractions we arrived at the door with typical British punctuality. It was essential in this case as the restaurant operates a two sitting scheme; one at 8pm and the other at 10pm.

The Tasca’s kitchen is open, the lighting quite bright and the staff dressed exactly as you’d expect in a contemporary restaurant. But the chic clean, apple green walls are toned down by objects like basic wooden crate shelving on which antique plates lean and a door with peeling paintwork attached to the wall. It is airy yet cosy, modern yet sporting old fashioned touches. The traditional reinvented.

Which is exactly the gastronomic philosophy of the restaurant’s three chefs, Vitor Sobral, Hugo Nascimento and Luis Espadana – the três mosqueteiros. Except there’s only two musketeers now as Luis has opened a sister restaurant in Brazil. This Portuguese/Brazilian relationship also figures in the cuisine.

Even though it’s away from the centre of the city and a Monday night, nearly every table was taken. The people in the know… well, know.

The Food at Tasca da Esquina
Tasca de Esquina is like the Portuguese equivalent of an upmarket tapas restaurant, except here the term is petiscos. You can select your own, but there are a choice of tasting menus where you surrender your tastebuds to Hugo and Vitor who, as the website says, will prepare a selection of dishes designed to give the palate some magical moments. 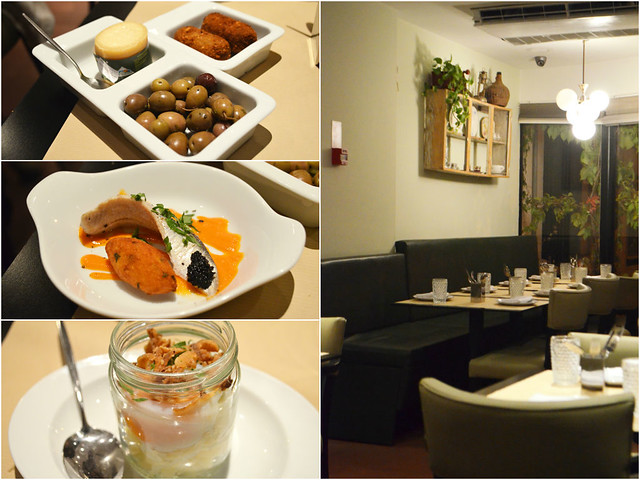 The couvert consisted of olives, steak and pine nut croquettes and that wilfully strong creamy, sheep’s cheese encased in its own rind cup. My god was it good – one of those dishes that had me scoffing all the bread, hang the filled belly consequences, to mop every last speck. We weren’t alone in our passion for the amanteigado, the foursome at the next table ordered a second. Paired with a sparkling white wine it was a dish whose flavours were so pleasurable it could have made my knees give way.

The next two dishes were classically Portuguese, and different from anything that would grace  plates in a traditional restaurant. Creamy caldo verde required a swirl with a spoon for it to take on its more familiar appearance, whilst a tender sardine swam in a red, bell pepper sauce around a potato croquette island.

Flavours, continents and wine changed for the next dish; a Brazilian medley of crispy fried onions with cod, egg cooked at a low temperature and manioc (yucca) paired with a crisp, white Dão encruzado.
This was followed by the subtle pairing of thin swordfish fillets on a fluffy, turnip purée mattress and then pig cheek with sautéed white cabbage matched with a sensational red wine, Quinta de Lemos Touriga Nacional. We’ve eaten pig cheek a few times during our travels; in Croatia and Italy. It’s a particularly flavoursome part of the animal and tender enough to cut with a fork. 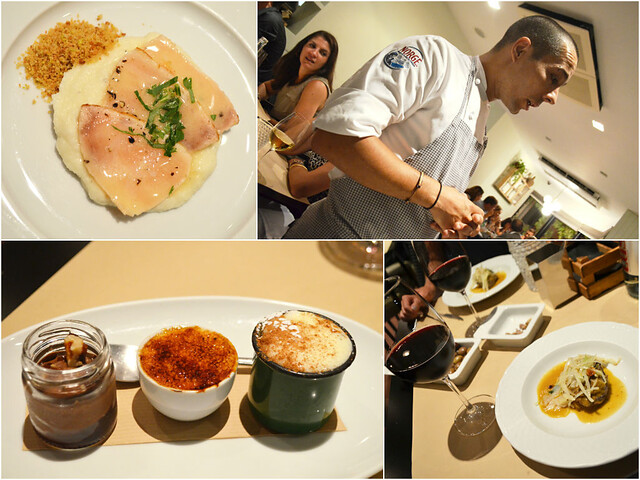 I’ve got to mention the Quinta de Lemos again. This wine is something else; smooth, smoky and fruity with an unusual and addictive woody after-taste. I’d move to Portugal just to be near to a wine like this.

The meal was finished with a trio of mini desserts – an ‘adults only’ chocolate mousse, the creamiest crème brûlée that’s slipped past my lips and îles flottantes (floating islands).

The Tasca da Esquina ticked all the right dining out boxes for us; a relaxed atmosphere which immediately made us feel welcome; staff who are efficient and knowledgeable in a chatty, friendly way; imaginative and personable chefs who are passionate about maintaining quality and traditions whilst bringing recipes bang up to date to satisfy more sophisticated modern palates. And then there’s the food. All I can say is my palate enjoyed those magical moments as promised.

This is the stuff of Michelin stars at a cost that will blow you away; taster menus start from €21.

You’d be crazy not to visit Tasca da Esquina.