Do oak trees dream of when they were acorns?

For twenty five years we’ve followed a weekly diet that involves preparing mainly non-meat meals during the week, with meat/fish dishes creeping in at the weekend. In this age of labels I guess people would call it flexitarian, even though we’ve been doing this since long before the word was a germinating seed in some lexicologist’s mind. 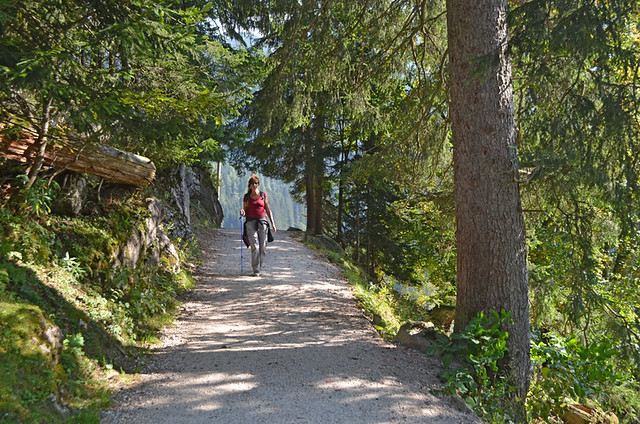 For the same period of time, our favourite way of freeing our minds from the clutter and dust of daily grind has been to head deep into a forest where the simple act of walking in the woods distracts from the outside world. Forests embrace, they wrap themselves around you physically and mentally. Enter a forest and an unseen entity gently detaches your problems and deposits them at the treeline to be collected, or not, when you depart with renewed spring in your step and a glow in your heart (sorry, I strayed into a Disney construct there). Forests can have that invigorating effect, we’ve refuelled on it for years.

Not so long ago I learned this is now called forest bathing, taken from the Japanese practice of Shinrin-yoku. Like I said, we live in an age of labels and trendy terms which play well in PR circles and social media streams. The first time I read about forest bathing was in an excellent Guardian article by Charlotte Church. It resonated because the restorative world she wrote about was so familiar.

One of the things we’ve discovered about taking ‘a wash in the woods’ is that different forests offer quite contrasting ‘bathing’ experiences. 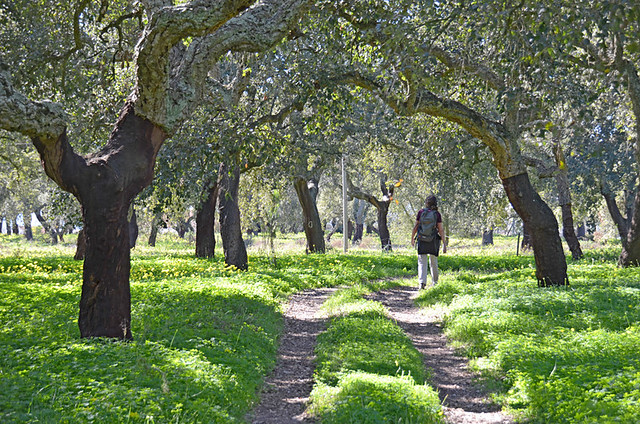 Cork forests in Portugal
Our work pattern is travel, travel, then sit in an office for weeks writing about travel, gradually going stir crazy. Brief escapes are provided by short jaunts in the small cork forest which lies next to the quinta where we live. A few steps and we’re immersed in a world shaped by humans and nature; the cork trees looking like finger-less gloves of varying shades of ruddy brown, each with a chalky number scratched onto its trunk – a date which informs when it was last stripped of its bark. The path winding through them changes from an earthy track in winter to a sandy trough by the end of summer. At parts there are mounds of freshly furrowed earth, the tell tale signs of snuffling wild boar. In the trees, Eurasian jays squawk, sing and make all sorts of noises They’re supported by the clack-clack-clacking of nearby storks perched in a nest atop some man-made construction. It is an open book of nature’s making, one which is full of diverting information. 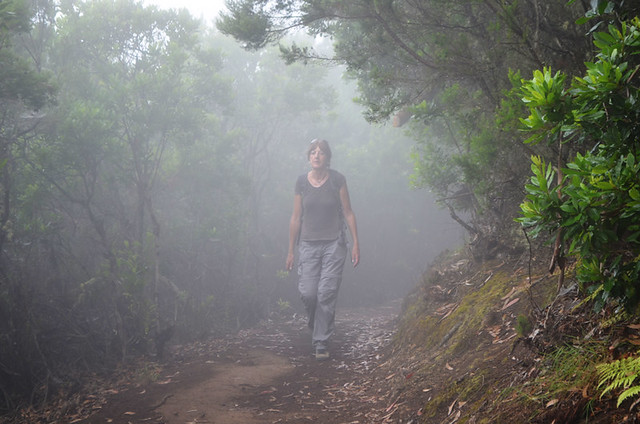 Ancient laurisilva forest on La Gomera
The laurel forests still found on some Macronesian islands offer a portal into a long gone past when laurisilva forests covered much of Europe and North Africa. Garajonay on La Gomera is a relic of these ancient rainforests and feels it – spindly, twisted, moss-covered trunks close in around hikers, creating an atmospheric environment where bruma (low cloud) drifts through the trees like ghostly sprites. Walking through the laurisilva forest when bruma descends can be both magical and slightly unsettling; the mist strangles sounds and obscures the way ahead, tree branches drip water even though there’s no rain. We walk with reverence, talking in hushed tones. In winter, the mist’s dank, dampness can chill through to the bone; in summer it brings sauna-like qualities to the forest, ones which drench the clothes – you could say true forest bathing. 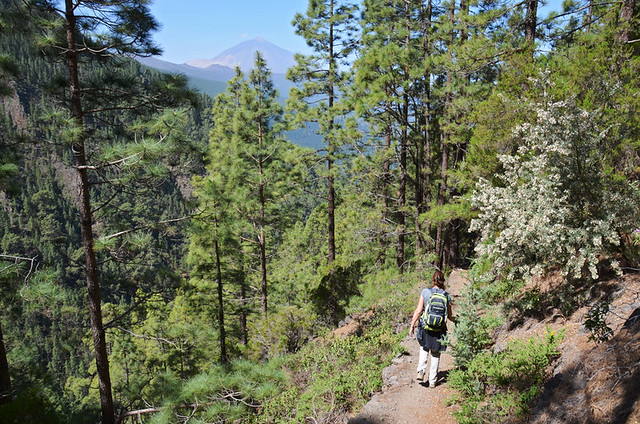 Pine forest on Tenerife
By contrast, the Corona Forestal in the La Orotava Valley on Tenerife across the water is generally a warm, dry environment to wander and wallow in; the air filled with the aromatic scent of warm pine needles. Lying above 1000m, the dense carpet of pine trees sweep toward Mount Teide above the cloud line, meaning dappled sunshine is the default setting. This is heady, exhilarating forest bathing, the pure air buzzing with the hum from industrious black bees is occasionally pierced by the shrill cry of a circling buzzard. It is a world of eternal springtime, and spring always wraps us in a comforting blanket of optimism. 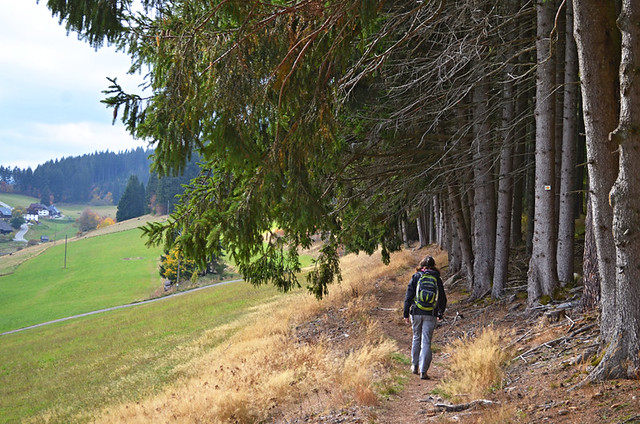 The Black Forest in Germany
“I talk to the trees, but they don’t listen to me…”
That’s because they’re too busy gossiping among themselves. Read the Hidden Life of Trees if you think that nonsensical. If ever a forest could make you believe fairy tales might be true it is the Schwarzwald, the Black Forest in Germany. It is immense (11,400 square metres of Scots pine, Norway Spruce, beech, firs, oak and more) and feels as old as time; a place where the earthy scents of decay and rebirth create an intoxicating blend. The Black Forest has multiple personalities; sometimes warm and welcoming, at others oppressive and threatening. When we ventured deep into its dark, dense heart I often felt humbled and insignificant; a minute insect amidst its great bulk. In places the air was heavy with something intangible, an imprint from another realm perhaps, which created a sense we were in the midst of incredibly wise beings… perhaps Ents. A flight of fancy clearly, but that’s part of the draw of being swallowed by a forest; opening your mind to its particular, possibly peculiar, influences. 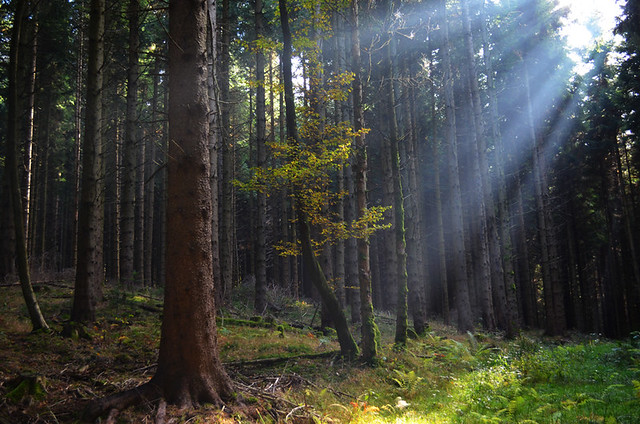 “So, do you have to take your clothes off?” A friend asked when we were musing about the term ‘forest bathing’ being used for doing something thousands if not millions of people do automatically. I laughed and pondered about the prospect of rolling about in a pile of dry leaves; not an unpleasant idea. But it triggered a memory from many years ago of Andy and I walking through a musty forest somewhere in Wales on a warm, summer day. At one point I was overwhelmed by a primeval urge to rip off all my clothes and lope off into the trees. The urge was so strong it was disconcerting. I told Andy, but instead of laughing and saying “don’t be ridiculous,” she replied she’d had the exact same thoughts. It was as though the forest was calling us to join it, but in undiluted natural form.
We’d have given in to the impulse if we hadn’t been so spooked at having the identical feeling at the same time. It hadn’t happened before and hasn’t happened since.

It’s a shame we didn’t, it would have been proper forest bathing in its purest form.

Tips and advice for hikers of all levels

When it comes to tips and advice for hikers, whether anyone is new to walking in the countryside or has notched up thousands of kilometres on the trail, there is always something new to learn. […]