I used to live in Stockport and work at Salford Quays. It was a 22km journey and yet my daily commute took as long and certainly wasn’t as relaxing as travelling from Tenerife to the small island at the edge of the world, El Hierro.

Travelling between the Canary Islands on a Binter plane is a bit like catching a bus in other places. In summer months there’s hardly enough time to get through the complimentary packet of salted nuts before you’re being advised to make sure your table is folded away as the plane’s about to land. 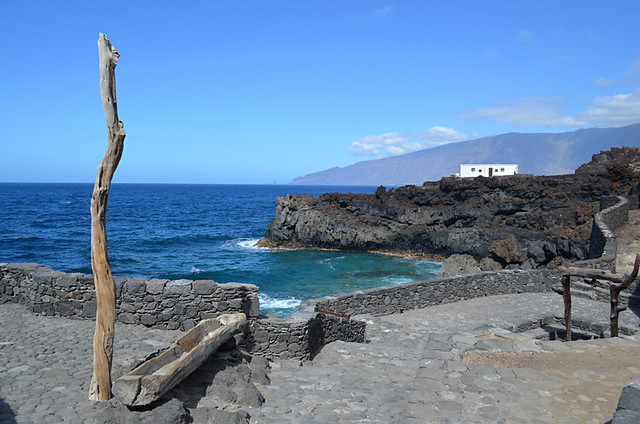 Friday on El Hierro
There’s no other plane at the tiny airport, our case makes it to the baggage reclaim about the same time as we do. Within an hour of taking off we’re driving along El Hierro’s quiet roads to our first stop at Pozo de la Salud on the western end of the El Golfo Valley.

There’s not much at Pozo de la Salud but, like much of El Hierro, what is there is interesting and slightly unusual – a well with healing qualities. Its magical powers have been recognised by the scientific community since the 19th century. Beside the well is the Balneario, a small spa hotel with quasi Georgian looks. It’s in a peach of a position right on the sea with views along El Golfo on one side and to an alien landscape of black lava columns and rough basaltic fields on the other. 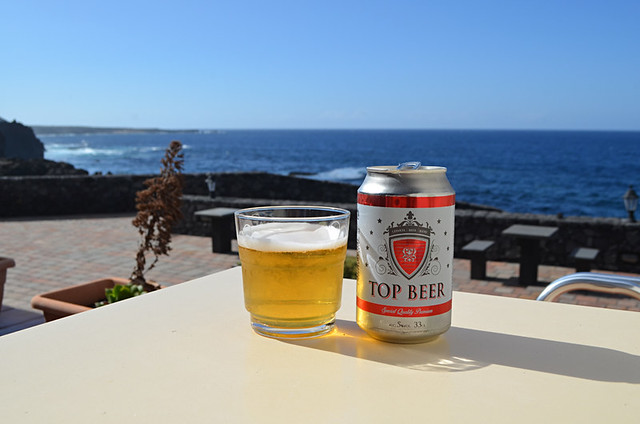 Getting our priorities right, we ask where the nearest supermarket is so we can stock up on water, batteries, beer and a bottle of wine. It’s in Tigaday, 10km away. The drive through banana and pineapple plantations doesn’t take long. Small islands can be quaint and utterly charming but they can also have limitations. I know this only too well coming from an island even smaller than El Hierro. The supermarket has wine, water and beer. But not AA batteries for my Garmin.

This is possibly the biggest supermarket on El Hierro.

Luckily another smaller supermarket in the town does. Stocked, we head back to Pozo de la Salud to enjoy a ‘Top Beer’ and the last of the afternoon sunshine on our terrace overlooking the Atlantic. 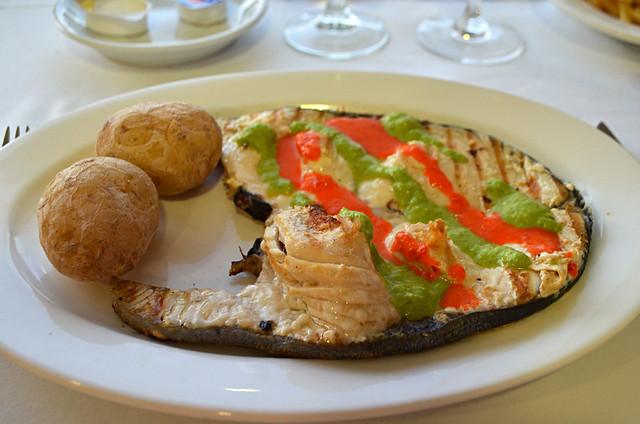 Dinner in the hotel includes some uniquely El Hierro ingredients – pineapple in the salad and a fillet of peto for main. Peto is also known as wahoo, a type of barracuda. The food is decent enough but without much personality. Even the famous Canarian mojos are on the timid side. Dessert is also a local speciality, leche asada – a wobbly, milky mousse affair that’s the Canarian version of crème caramel.

There’s not much entertainment to be had in Pozo de la Salud. However, a bottle of wine on our balcony enjoying the balmy August temperatures whilst listening to the soporific sound of waves breaking a few metres away and the cartoon call of passing shearwaters makes for a most satisfying way of passing a Friday night. 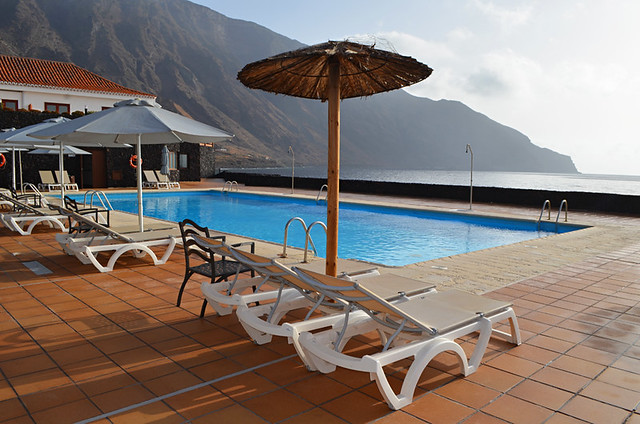 Saturday on El Hierro
Saturday morning is convoluted. We drive two thirds of the way around the island to the Parador at Las Playas where we leave our car. We want to travel to La Llania on the spine of the island. The receptionist at the Parador advises buses are infrequent on a Sunday. Another guest points out it’s Saturday. He smiles, shrugs and replies “es igual”. He calls a taxi, it takes around half an hour to arrive. Getting around on El Hierro by anything other than a car can be a slow business.

By the time we step into the shade of the brezals (tree heath) at La Llania it’s half past midday and searingly hot; not an ideal time to be setting off on a long walk. Before we head on the path back to the Parador, we follow a charming trail through the forest passing a few other walkers along the way. Despite the high temperatures (30C) the shady forest is a pleasurable place for a walk. Our route takes us past an old aljibe (a concrete tank used for storing water) and up to the rim of the volcanic crater of Hoya de Fireba. At its centre is a lime green oasis. Islanders used to grow potatoes there. It’s one hell of a climb down and back just so you can have papas arrugadas for dinner. 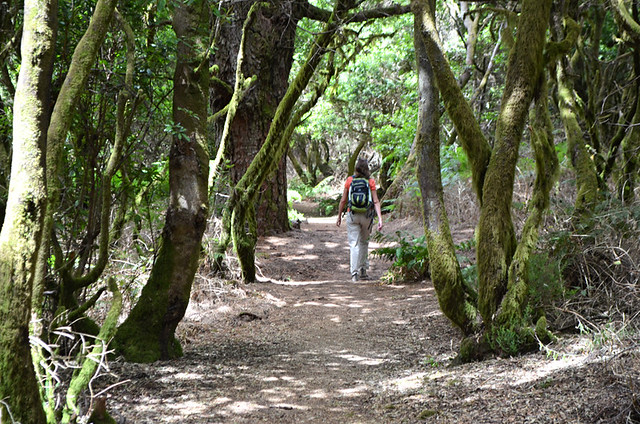 We pass a spot which was said to be an open air dance hall for witches and return to our starting point via a viewpoint where an ocean of cloud totally obscures the view.

From this point it’s an almost straight line through the pines to Las Casas where we start the ‘real’ descent to the Parador – it’s an 800m descent over 2km. The view over Las Playas is what one of my nieces would call ‘wowsers trousers’. But once its magnificence has seeped in, the brain nervously registers we’ve got to get from our cliff top position to sea level. 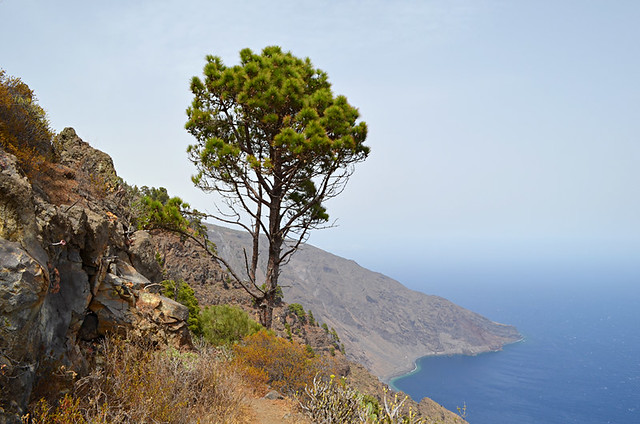 As it happens, the angle of the descent although steep isn’t too bad. Vertigo sufferers may feel different. The problem is the narrow path is covered with loose scree. Every step has to be considered with feet being placed very, very carefully. Thick carpets of pine in parts make the going potentially more treacherous. Our progress is painfully slow.

By the time we arrive at sea level the sun has dipped behind Las Playas’ mountain backdrop. There will be no sunny terrace beer today. 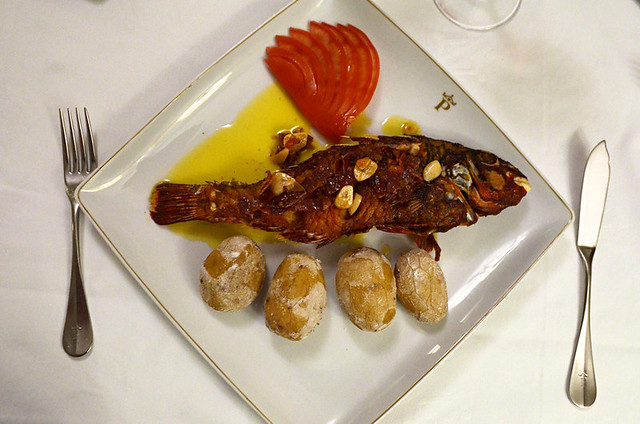 Dinner at the Parador involves more local ingredients, including banana kebabs with Andy’s main course. I opt for a Canarian favourite, vieja (parrot fish) whose already sublime flavour is ramped up by the addition of crispy serrano and slivers of garlic. The food is excellent. They don’t have my first choice of dessert so I opt for my second, leche asada… again.

Continued in a weekend on El Hierro part 2.