“Shall we walk to the waterfall?” Asked Jo.

“A waterfall sounds good, but we’re only here for a couple of days and need to spend our time around Valle Gran Rey.”

“But it is in Valle Gran Rey.” Jo laughed.

We’d visited Valle Gran Rey on La Gomera many times over the years and had never seen a waterfall.

Even the most popular destinations hold secrets, we know this. But Valle Gran Rey isn’t a very big resort. There’s one way in, one way out. How could we not have spotted a waterfall?

Quite easily as it happens. The barrancos (ravines) in the Canary Islands are masters at concealing things. We’ve stumbled on a spooky abandoned mining settlement on Tenerife, an emerald lake which doubled as a bird sanctuary on Fuerteventura, and ancient rock carvings on La Palma, amongst other little surprises. A waterfall hidden in a resort was not beyond the realms.

Valle Gran Rey isn’t one resort as such, it’s a series of barrios (neighbourhoods). Some line the coast, others stretch inland. The route to the waterfall was accessed from one of those, El Guro. 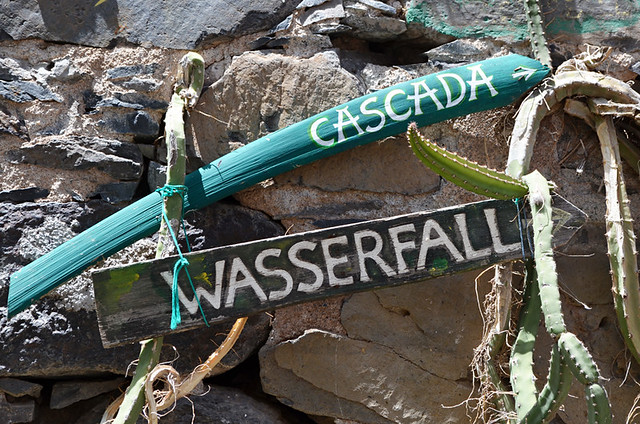 A couple of rough signs – one in Spanish, the other German – pointed the way through narrow passages between cottages, many of which exhibited the bohemian, arty nature of the area. There were rainbow gates and surreal sculptures built into walls whilst nature added to the colour scheme courtesy of scarlet geranium carpets tumbling over low walls. 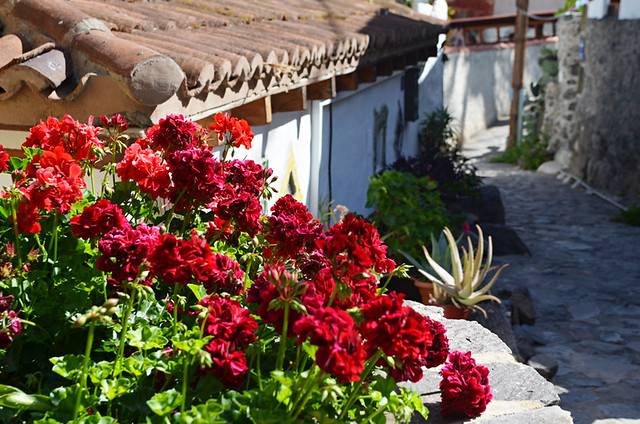 Within 15 minutes the passages were replaced by a sandy path leading into a ravine whose floor was thick with palm trees and rasping cane. It was easy walking. 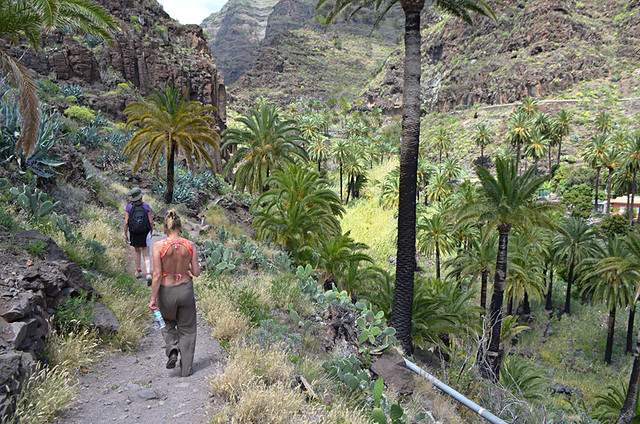 Country strolling changed to jungle-like adventure when we reached a small waterfall and a rock wall. A roughly cobbled together ladder made from branches was our only access to the next level.

Although April, the sun was fierce and we were happy to be swallowed by the shade provided by the dense mix of low trees and high cane. The path became increasingly uneven as we progressed deeper into the ravine, throwing different mini challenges at us, ranging from an ascent over slippery, rocks the size of an elephant’s back to negotiating stepping stones across the stream which traced a route to our goal. 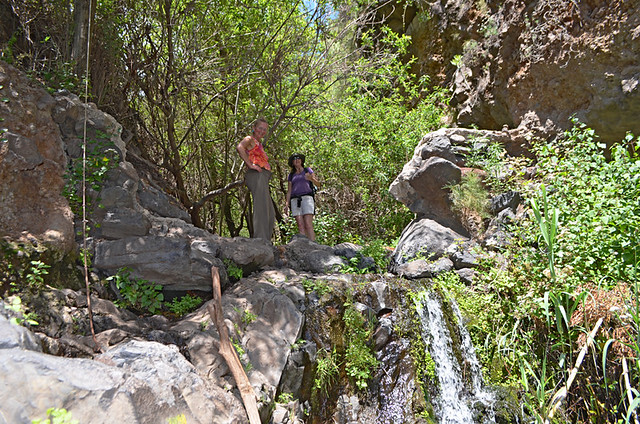 The most difficult section involved a huge boulder barrier where at some point in the past somebody had fixed ropes. They didn’t quite meet so it looked as though there would be an element of quasi-abseiling. As we pondered the best route a posse of German teenagers appeared out of the darkness at the far end of the boulder barricade. Some swung their way past it like mini Tarzans whilst others nervously edged themselves to a point where they could slide down the final section on their backsides. Watching them allowed us to figure out the easiest route.

And it did turn out to be easier than many of the young hikers made it appear. 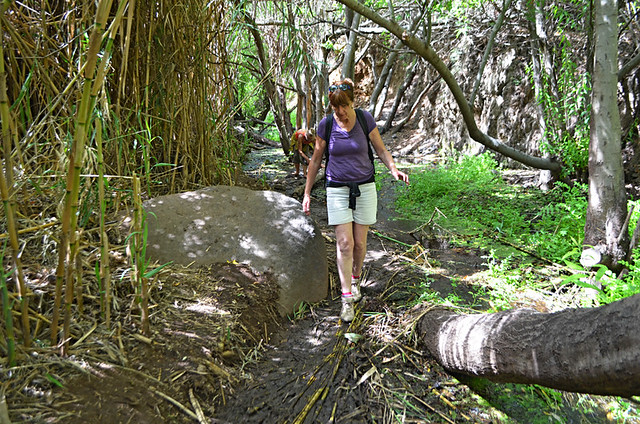 From that point the ravine narrowed and we negotiated variations of the same types of obstacles until, finally, our path was blocked by a sheer wall down which water cascaded into a small pool. The sort of place where a fairytale princess might discreetly bathe. The Wasserfall.

It was hardly Victoria Falls, but seeing this humble yet magical offering hidden so close to a sunny, arid resort area was enough to have us beaming. The jungle-like approach heightened the sense of wonder. 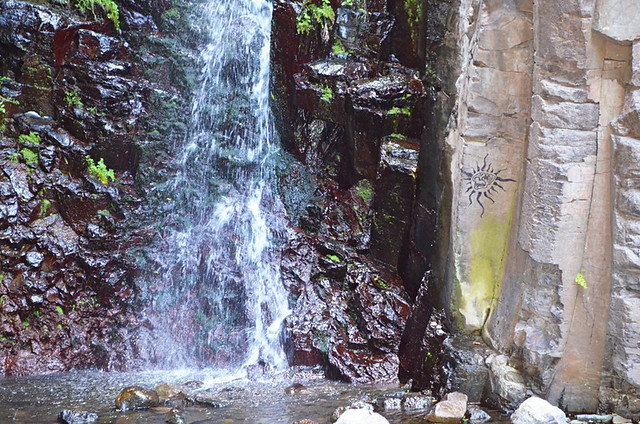 Our Livingstone-esque sense of achievement was short-lived when we heard whoops and laughter and two children, barely past toddler size, came skipping barefoot across the rocky, slippery terrain we’d negotiated so carefully.

We weren’t quite the intrepid explorers we thought we were.

Still, I now know where there’s a waterfall in Valle Gran Rey and that’ll do for me.

The hikers’ Canary Island of choice, La Gomera has long attracted the walking stick wielding brigade and one look at its terrain confirms why. […]