We’re at a crossroads on a hill above Salzburg. The path right leads to an ancient fortress full of history and museums. The path left leads to Augustiner Bräu, a former monastery that we’ve been reliably informed is the best beer garden in Salzburg, satisfying thirsty Salzburgers for nearly 400 years. 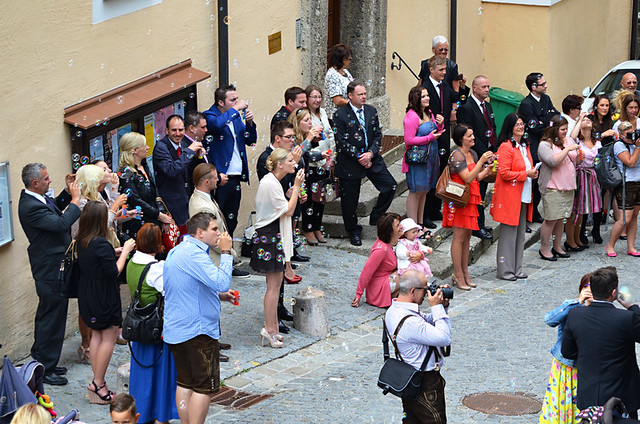 Arriving at Augustiner Bräu from the ‘rural’ side of Salzburg is very different than arriving at the main entrance. The ‘back’ entrance is quite anonymous and even as we stand above it, listening to a barbershop quartet sing Hello Mary-Lou to a bride and groom as the rest of their wedding party fills the air with soapy bubbles, we’re still not sure we’re in the right place.

We follow a smartly dressed couple into an arched corridor. At its end, they slip through an unmarked door. Once again we follow. On the other side is either a beer-sodden Nirvana… or a wedding ceremony.

It’s Nirvana. But there’s no beer. There are promising signs though. 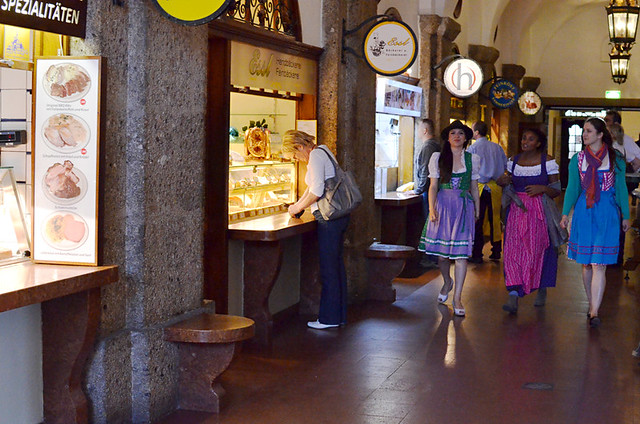 A grand staircase descends to an ecclesiastical hall lined with food stalls selling schnitzels, sausages, pretzels and all sorts of fried offerings. Having just eaten lunch it’s tortuous. I’m simply not hungry. Huge halls off to the side are virtually empty, save for a few folk. None are drinking beer.

We continue into the monks’ den, slightly confused.

The confusion is short-lived. More stairs descend into the light and a frenzy of frothy activity; the beer garden – a huge expanse of tables and chairs underneath a shady leaf canopy. It is packed. Everyone in Salzburg must be here. For a brief moment it is overwhelming, but the heat has left a serious desire for beer.

Ordering Beer at Augustiner Bräu
Despite the hustle and bustle of beer-bound commuters, it doesn’t take long to figure out how the system works. It is delightfully simple and efficient. 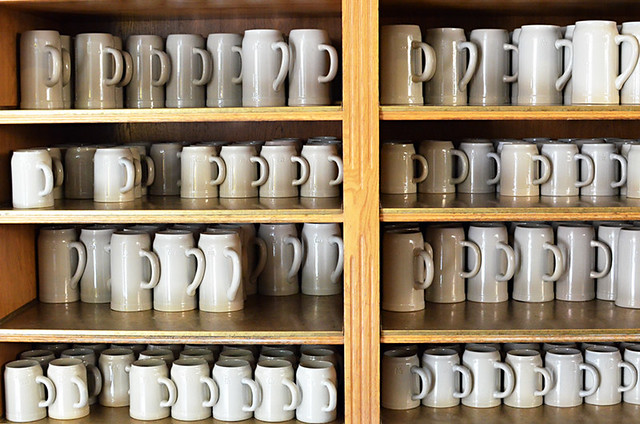 In an alcove beneath the stairs, two men sit at tills. There are two prices: €6 for a litre, €3 for half a litre. We hand over €9, he gives us a ticket and we pass through to face a wall of ceramic jugs (no prizes for guessing they come in two sizes).

We grab our jugs and make our way to another duo standing beside old wooden barrels. We hand over our tickets and jugs to one of the barmen. He fills the jugs from the barrel and slides them back to us Wild West saloon style across a smooth copper surface. 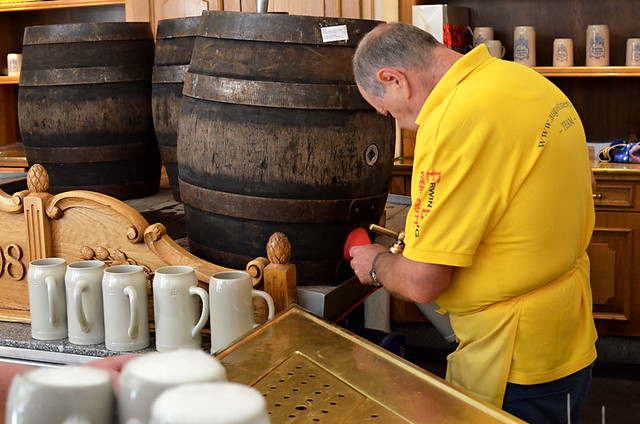 Result. We have beer; a lot of beer.

The Beer Garden
Although it’s busy we find a seat in the dappled shade with no problem. The garden buzzes with the infectious sound of people having a good time. The clientèle mostly look like seasoned locals but there are plenty of visitors as well. You can spot them easily, they’re the ones looking around wide-eyed (like us) whereas the locals are concentrating on their friends, the beer and the mountains of food they’ve brought with them (you can bring your own grub). 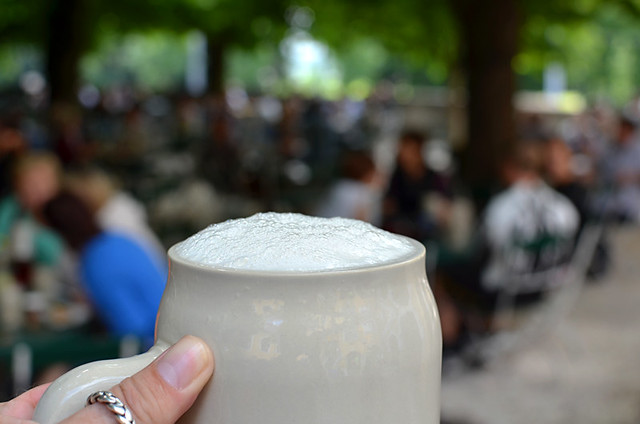 We clink our jugs together, say pröst and gulp down beer which is surprisingly smooth and sweet – far too drinkable. It makes me realise the lager I normally sup is no more than flavoured water.

We sigh, smile and drink more. 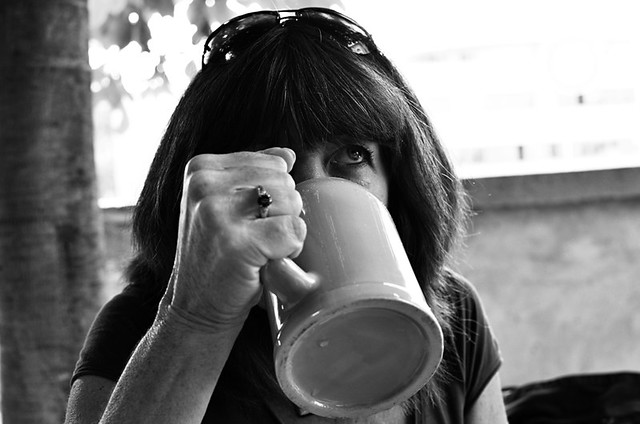 The Prawn Crackers
A good percentage of the beer garden’s patrons are carrying small trays of curly white things. We watch, transfixed, trying to get a closer look. They are the most popular food choice in the place.

Andy decides further investigation is required. We’d never have guessed the answer in a month of Sundays. They are salted shavings from white radishes. 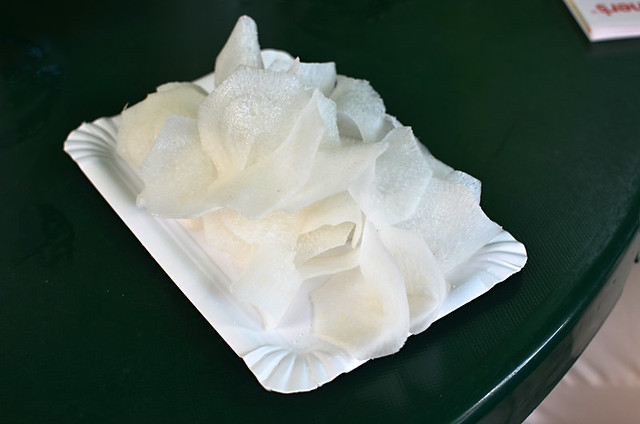 A tray (€1.90) is duly purchased from a woman who shaves the radishes from a spike – a bit like kebabs.

The aroma isn’t great. ‘Rank’ is how Andy actually puts it. The flavour isn’t much better. They are obviously an acquired taste. We pick at them unenthusiastically. The salt makes us drink more beer. Somehow we eat them all between generous gulps (maybe that’s the idea).

The beer disappears faster then anticipated.  Unfortunately, the taste of salted radish doesn’t.

There’s only one solution. 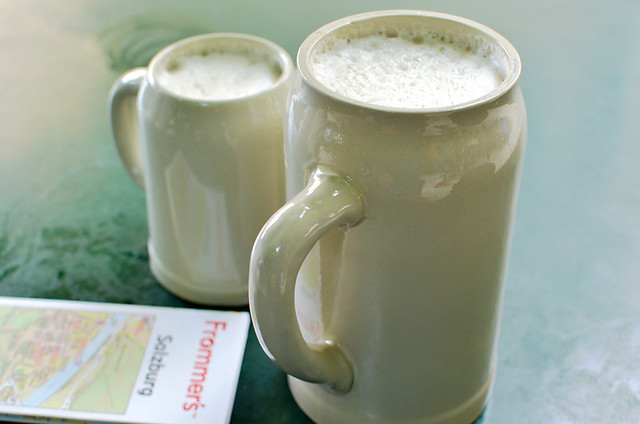 When in Rome, do as the Romans do. When in Salzburg, drink lots of beer.

Augustiner Bräu, an intoxicating place in more ways than one.