Perusing menu after menu which included a more diverse choice of vegetarian meals than I’d seen on any other Canary Island, irony perched on my shoulders, chuckling away .

It was in Santa Cruz de La Palma in 2004 we decided it was time to become carnivores again, prompted by traditional menus which were completely uninspiring if you didn’t eat meat.

Jump forward eight years and although the gastronomic situation had also moved forward, and we ate well in colonial mansions whose grand looks helped boost the taste factor, the cuisine felt as though it didn’t quite match the sophistication of the island’s architecture, art or fashion scene. 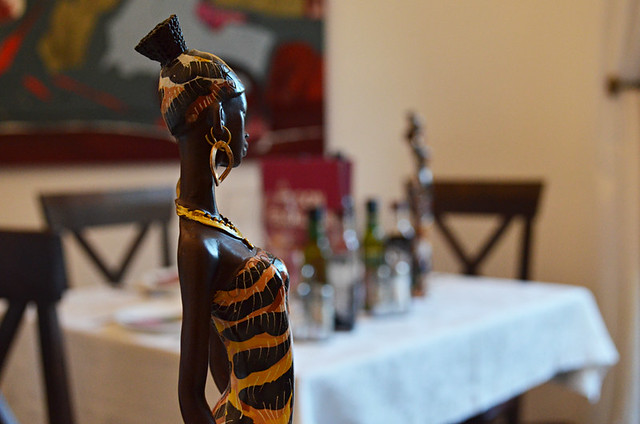 “Some chefs try new things,” one local told us as he pointed out one of the only creative restaurants he knew was doing okay. “But people ask why should you change food that is already good, even younger Palmeros.”

Skip forward another four years and it feels as though the gastronomic scene on La Palma has positively blossomed. We’ve visited La Isla Bonita three times this year, staying in Barlovento, Puntagorda, Los Llanos de Aridane, Fuencaliente and the capital Santa Cruz whilst we explored as much of the island as we could manage. The food we devoured along the way ranged from being good to bloody delicious.

Although we’ve taken note of quite a few more La Palma restaurants to check out on future visits, these are the ones which had us enthusiastically toasting the chef with lashings of local vino. 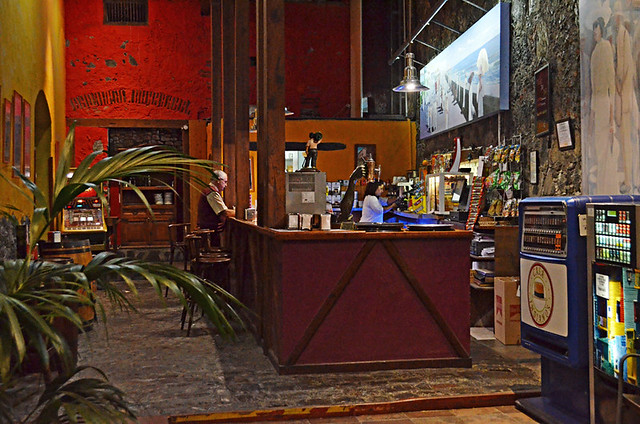 Favourite Restaurants in Santa Cruz de La Palma
Over the years we’ve eaten at many of the restaurants, cafés and bars in Santa Cruz. We enjoyed eating out in the town this year more than ever before.

Bar Cinnamon
Bar Cinnamon was recommended by the owners of nearby Hotel San Telmo. It’s a restaurant rather than a bar (it seems to be a thing, El Rincon del Enano opposite is called a pizzeria yet has a menu full of above average nosh… as well as pizzas), a modern, bright restaurant with zingy white and red colour scheme and menus which are colour co-ordinated with the décor. The menu has Spanish/Canarian roots but the reality of the food at Bar Cinnamon is it’s only a distant relation to the dishes served in traditiona restaurantsl. ‘It’s morcilla Jim, but not as we know it…’
Stand out dish: Blue cheese croquettes in a white chocolate sauce. Trust me, this unlikely combination works a treat.
Plaza Santo Domingo; open 1pm to 3.30pm and 8pm to 10pm, closed Sunday. 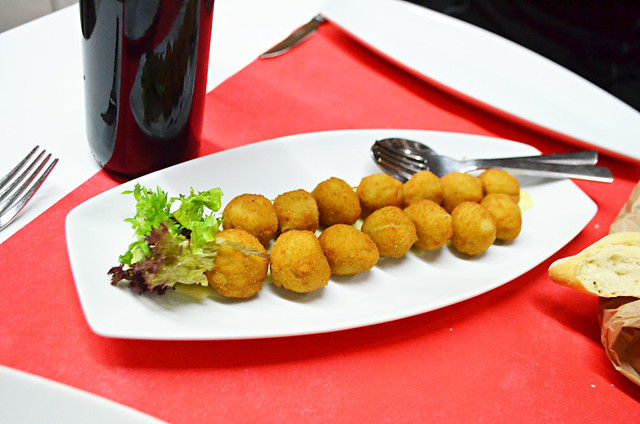 Casa Los Indiano’s
Located beside the bus terminal, the interior of Casa Los Indiano’s is like a cavernous barn full of wonderful paintings of the people and the fiesta it’s named after. It’s a gorgeous place to have dinner and the bar is of the sort which calls out to your elbows. It’s a haunt of the local bus drivers so you might expect it to be traditional, it’s not. The menu is tantalisingly different from standard Canarian restaurants.
Stand out dish: Tuna tataki with a honey, soya and sesame glaze. Sublime.
Avda. Los Indianos, 2; open midday to 1am daily. 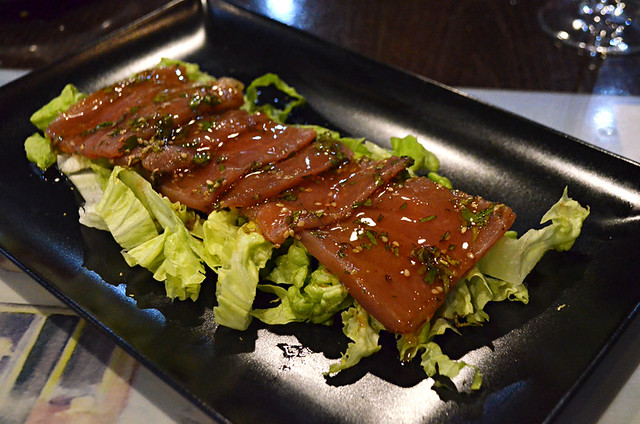 El Duende de Fuego
Stick to the old town and you’ll miss this cracking little restaurant. It feels like a mix of gourmet deli, art gallery and contemporary restaurant. A glass cabinet exhibiting ingredients is almost as colourful and distracting as the art on the wall. The chef is local, the ingredients he uses are local, but the menu is unique. There were a lot of dishes that were new to us; it was almost impossible to make a decision.
Stand out dish: It’s a tough call as every dish we tried was full of intoxicating flavours but I’m going for tuna with fried green bananas – just such a fresh and delicious fusion of flavours.
Calle Teniente General Gonzalez Del Yerro; open 10am to 4pm and 7pm to 11pm Tuesday to Saturday, 6pm to 11pm Monday, closed Sunday. 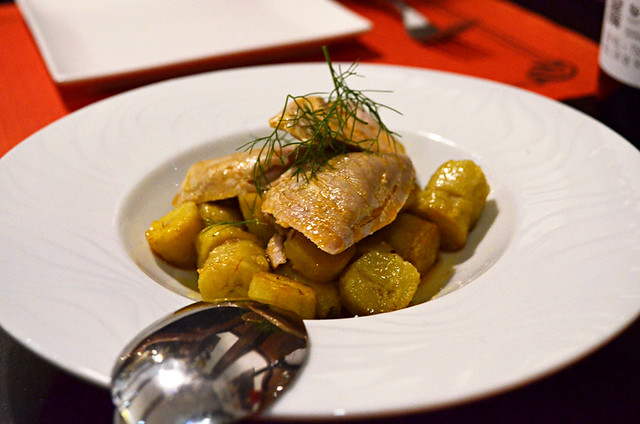 Don Escaldón
There’s something vaguely decadent and old school about Don Escaldón, yet at the same time the vibe is fresh and bang up to date. Tables are laid out in various rooms in a colonial town house. There’s a funky and fab roof terrace which is THE place to sit if dining there in the summer months. The menu leans towards northern Spain so although quite traditional, it’s different from many other restaurants.
Stand out dish: Pulpo feira. The octopus at Don Escaldón is simply the most tender we’ve eaten anywhere. The homemade, doorstop chunks of Galician bread also deserve a special mention.
Calle Real, 25; open 11am to 4pm and 7pm to 1am, closed Sunday. 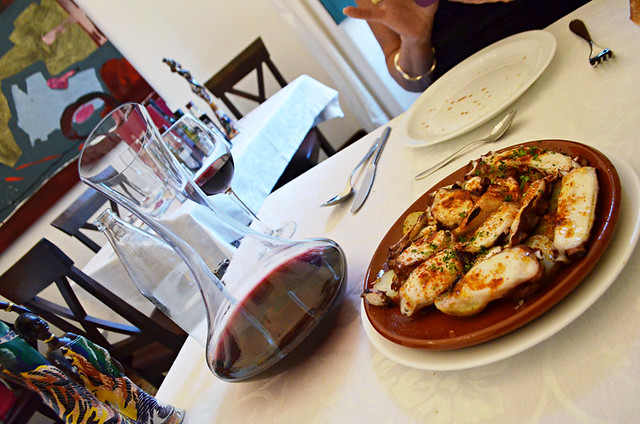 EME22
EME22 is a sleek modern tapas bar with artisan beer and tapas scratched out in coloured chalk on a blackboard. Again, it’s in the newer part of town so easily overlooked. It’s better for a light lunch than dinner and its small menu has some interesting dishes.
Stand out dish: Crocantis. We had to ask what these were. Basically they are cubes of local cheese breaded, fried and served with a creamy, spicy salsa.
Calle Enrique Mederos Lorenzo, 22, open 8am to midnight Monday to Thursday, 8am to 2am Friday and saturday, 9am to 3pm Sunday. 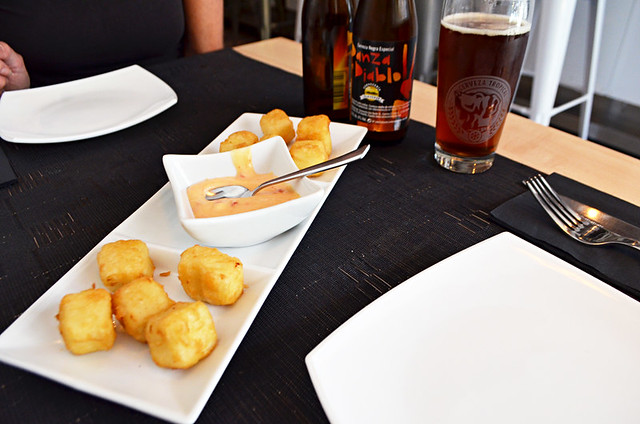 Fuencaliente
The area including Spain’s youngest piece of land was probably the biggest surprise. We spent a Friday night in Los Canarios in Fuencaliente many years ago and it was an experience which was probably at the opposite end of the scale from sophisticated. Things have changed.

El Jardín de la Sal
Sitting below ruddy volcanoes and above surreal salt pans, El Jardín de la Sal is a culinary oasis in a weird and wonderful landscape. It’s a place to lose an afternoon, bright airy with lots of glass so you can gaze dreamily at the sea even if the wind is gusting. The menu is creative Canarian with fish being a good choice. A range of flavoured salt comes as standard.
Stand out dish: A tapas selection featuring a different take on local favourites – tuna montadito, puchero croquettes and chicharro (a small fried type of mackerel) with mojo verde.
Ctra. la Costa el Faro, 1; open 11am to 7pm daily. 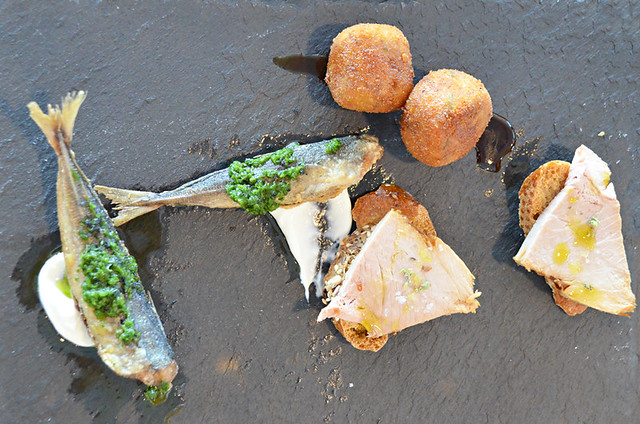 Puesta del Sol
The true find of all the restaurants, a place we only stumbled across it due to an unexpected change in plans. Puesta del Sol is a restaurant you have to know about to know about. The small restaurant inside Apartamentos Colón is a sunset trap where it’s easy to be seduced by the golden globe whose rays illuminate the small but tastefully decorated dining area. We’ve now eaten there three times and each time chef Vidal has blown us away with his creations. Most ingredients come from the family’s allotments and orchards (they produce their own wine as well).
Stand out dish: I can’t decide between a wild rice salad with banana, sweet cherry tomatoes and a killer of a tomato sauce or fillet of pork in mushroom sauce served with mini vegetables.
Apartamentos Colón; open 6pm to 10pm, closed Sunday. 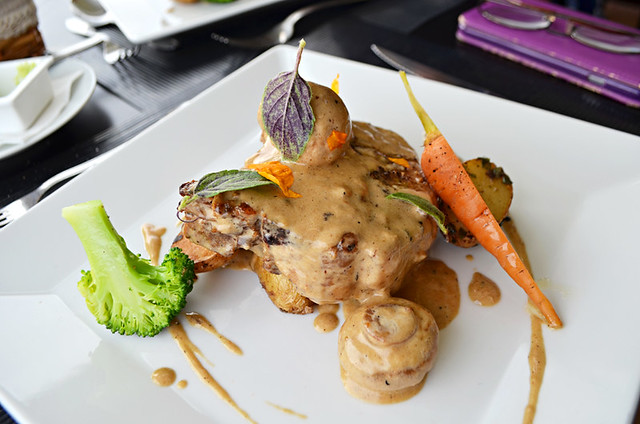 It’s because of restaurants like these on La Palma that we specialise in hiking and dining, the hiking part being an antidote to the obvious effects of gastronomic over indulgence.

The English occupation of Menorca from 1713 to 1755 has left an eclectic legacy which includes the cultivation of apples, rearing of livestock, some rather nice Georgian style buildings and gin – to my mind, the best of the aforementioned. […]