I make the mistake of taking the pastry out of the fridge five minutes before I need to use it. When I try to mould it to the flan dish it melts over my hand and arm. Five minutes from chilled pastry to a floppy mess. It’s impossible to work with. The clock thermometer in our kitchen shows it’s 30C at 19:30. At least it has cooled down a few degrees. All the windows in the house have been open all day; the curtains mostly closed over to try to let air in and keep the sun’s probing rays out. The sun might be dropping behind dwarf-goat hill but the heat doesn’t want to go with it. Oh no, it’s made itself right at home and shows no intention of leaving. On the upside, the frozen prawns I forgot to take out of the fridge earlier have defrosted in record time. It’s so incessantly hot I feel as though I’ve sprung a leak somewhere on the crown of my head. This is what real heat feels like, and it’s only the end of May.

We’ve been plenty of places where the sun has been fierce, literally blistering as we discovered on our first holiday together on a shade-less beach on the Greek island of Zakynthos. There we could only suffer five minutes roasting parts exposed to the sun before we were forced to change position, to expose different white bits. That was during May as well. But the huge difference between that and the next-level-up heat we’re experiencing now is that a move into the shade then was like jumping from an oven into a fridge. When real hot weather comes to town you don’t get the delicious relief you find moving from 30C in full sunshine to shade temperatures that are refreshingly far lower. When it’s truly hot the heat is all-invasive, as though the sun’s rays can bend around parasols or leafy canopies. “Ninety-six degrees in the shade. Real hot, hear me when I say in the shade…” 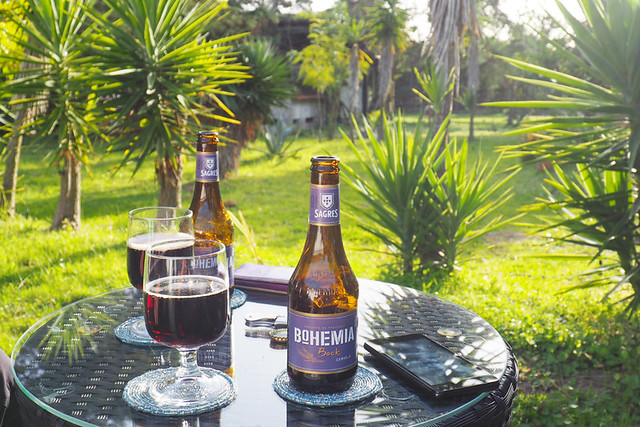 On days like this the heat comes at you sideways, you can’t escape it. At around 18:00 each evening we crack open a beer on our back terrace, still huddled in the shade cast by the patio umbrella even though the sun has dipped behind a row of pine trees. Despite having been chilled to the point of causing brain-freeze, after the first couple of sips the beer tastes unpleasantly warm.  It tastes of 1997 and Blur’s Song for 2. It tastes of a time when real heat was responsible for getting us outrageously drunk at a riverside bar in the Financial District in Singapore. Then, we were real-heat novices. We’d visited the Far East enough to know the second we stepped outside our cool-as-a-fridge sanctuaries (aka hotels) sweat would explode from every pore in our bodies, a mass breakout which drenched us from head to toe in seconds.

But any time in bars had obviously been spent inside in air-conditioned loveliness rather than on their ultra-humid terraces or we’d have realised ordering a jug of beer instead of sticking to small glasses was a dangerous mistake. We’re fast learners. We learnt quickly that unless we downed it rapidly, the liquid in the jug would soon be undrinkable. It was a long, cool kiss all the way down; a long, cool, addictive, seductive kiss that left us wanting more. When the jug was gone we immediately ordered another. We might learn quickly, but not after brains have been sweet-talked by an amber rogue. Subsequently, my memory reveals only three acts – 1) waxing lyrical about refreshing jugs of beer, good food and getting merry by the river 2) screaming along to Song for 2 as sophisticated ex-pat bankers looked on in disgust 3) stumbling along unlit, unfamiliar streets trying to find our way back to our hotel. The end.

This is the flavour of real heat for me, the memories unlocked by the tepid bubbles in my glass of Indian Pale Ale and rivulets racing each other down my shiny bonce take me back to those cringeworthy moments. For anyone who thinks this is all exaggerated nonsense, I’ve only one thing to say – clearly you’ve never been to Singapore.