I pulled the brim of the straw hat forward, casting a cooling shadow over my face, sat back on my chair, surveyed a sea of green that stretched for miles in all directions till it met an intensely blue sky, held the glass with its cherry-coloured contents up to the sun, and sighed “saúde.” 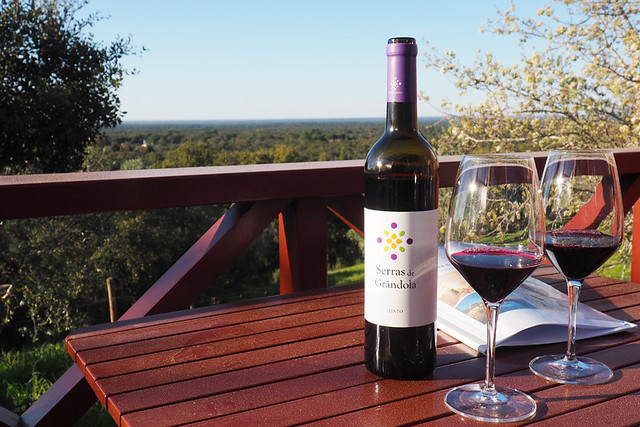 Staying in a hotel in rural Alentejo which also happened to be a vineyard added extra sparkle to the experience. The wine tasted divine, its flavour intensified by its proximity to the neat vines below our balcony. It was the second time in just over a week we’d stayed in a vineyard. Both cases prompted thoughts of many other visits to vineyards around Europe, visits that had formed long-lasting, warm and fuzzy (not just thanks to enthusiastic tasting) memories.

We don’t necessarily seek out vineyards and/or wine producers, sometimes fate just throws them into our paths. 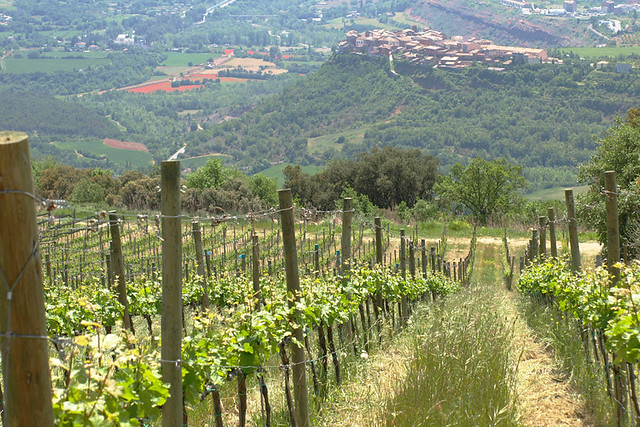 Intoxicated by Catalonia
The view from Castell d’Encus near Tremp could have had me drunk on non-alcoholic wine – vines tumbling down the hill to a cluster of stone houses huddled together atop a small hill surrounded by thick forests and scarlet poppy fields. Catalonia is a stunning region in so many ways. At one point I had four glasses in front of me, the contents ranging from a ruby red to a sunburst Sauvignon Blanc. Serious intoxication was staved off only by a feast of locally produced goodies – hams, cheeses, dried sausages – including girella, a pattie which tasted similar to haggis, a flavour that really made me feel at home. It was one of those special afternoons with lashings of wine, food and laughter. 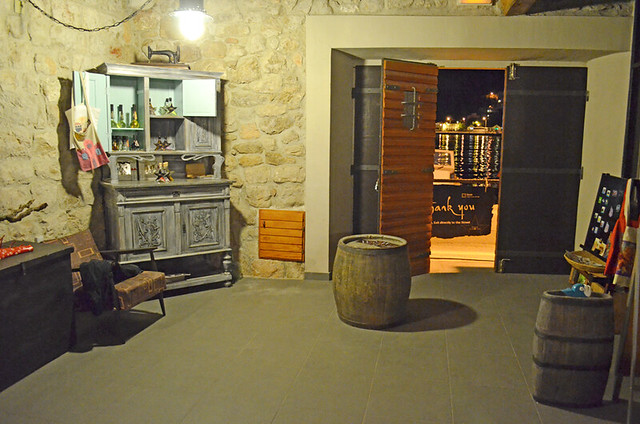 Wine-less in Dubrovnik
Dubrovnik old town closing early left us without any wine to imbibe on our hotel room balcony overlooking Gruz harbour. This was clearly an unacceptable state of affairs. After bombing out on a quest to find anywhere open which sold wine at less than exorbitant prices, we entered the last chance saloon – a slightly ajar door on a stone building which looked as though it might have had something to do with wine. It turned out Skar was the only authentic winery in all Dubrovnik, so sea captain and wine producing owner Mati told us. The winery was closed, but that didn’t stop Mati from pouring generous measure of his Plavac Mali to test before he gave us a private tour and sold us a couple of bottles – result. It felt as though we’d stumbled into somewhere which had remained off the beaten track in a city which was increasingly suffering from over tourism. Checking on Tripadvisor to see whether Skar was still in business it’s heartening to see the sea captain’s winery is going strong, and is now open till 10pm – a sanctuary for other post-dinner wine seekers. 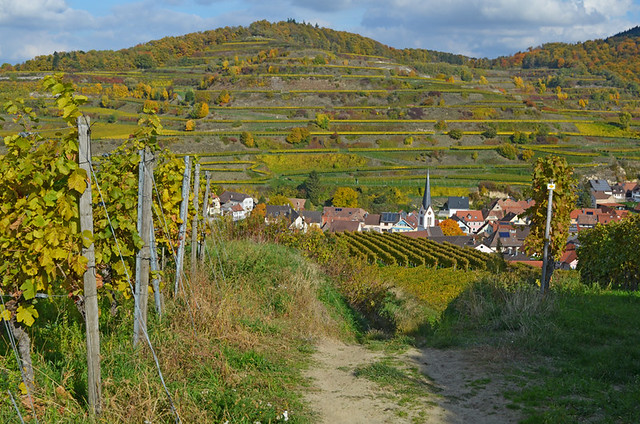 German wine country
Kaiserstuhl was not what I’d ever imagined German countryside to look like, even after having walked through significantly-sized chunks of the country. The vineyards of the sunny plateau in the Upper Rhine Plains are anarchic in their design. The rows themselves are neat, but they interact with other vines at such acutely contrasting angles, and on various levels, that it gives them the appearance of a puzzle or a work of mathematically-inspired art. Our base, Ihringen, was a town where the flower-covered entrances to nearly every building led to wineries. We had only 24 hours there and were on a mission which took us away from the weinguts; not leaving enough time to indulge. Instead, we wandered sunken lanes where bee-eaters fluttered, and parted clouds of ladybirds to pass alongside the crazy-paving vines, piecing together a walking route which took us into the pretty village of Bickensohl where we couldn’t resist the draw of the scenic terrace at Weingut Hauser-Bühler. In the heart of German wine country we did something unheard of in a winery, we didn’t try the wine. Instead, as we still had half a walking route to complete, we ordered cherry cake and coffee. If we’d succumbed to temptation we’d never have completed our mission. 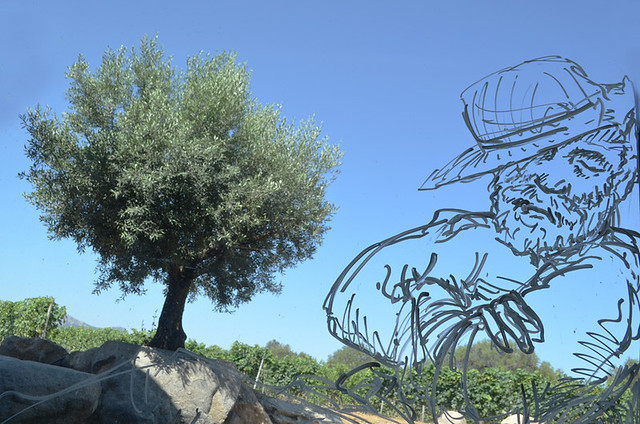 The scent of Corsica
Anthony cracked me up; he was our contact on Corsica, helping us put together a slow travel holiday. His colourful tales of life on the French island made us laugh, and also made us slightly wary of ‘exciting’ locals too much by talking politics (the Brexit vote took place whilst we were there), bumping into the French Foreign Legion who trained on the island, and of local cows whose character was apparently as fiercely independent as the island’s human population. He also introduced us to the specialities of Corsica’s food and wine scene. I took to Clos Culombu vineyard outside Montegrosso before I’d sipped any of its wines. It exuded that affinity with art you often encounter in vineyards, starting with a neat graffiti wall create by clearly talented customers. The tasting room was as much contemporary art gallery as it was winery and featured the most perfect piece of wine art I’ve seen anywhere. The vin which took our floral-scented breaths away was vin d’orange, a sweet concoction made from white grapes macerated with the zest of oranges, lemon and cinnamon bark. It was orange blossom in a glass. 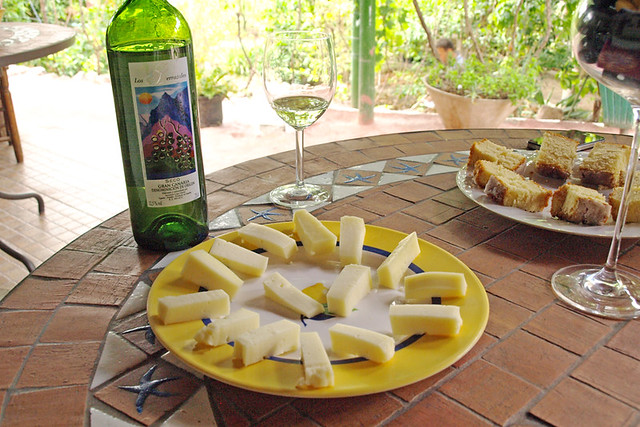 Coffee and wine on Gran Canaria
I could recount any number of merry afternoons spent in various Canarian bodegas; however, the culmination of a walk through Tamadaba National Park on Gran Canaria stands out as being unique. As well as producing wine, Los Berrazales in the sub-tropical Agaete Valley is a fruit farm (oranges, mangoes, guavas, avocados) and the most northerly coffee plantation in the world. Over the space of a couple of hours owner Victor plied us wine, goat’s cheese, orange blossom honey and sponge cake, which went deliciously well with Los Berrazales seco – a blend of Moscatel and Malvasia. Like most wine producers, his enthusiasm and passion was infectious. I was chuffed recently to see Victor’s bodega had won an award for innovation in gastronomy at the 2018 Canary Islands’ Los Premios Mahou. 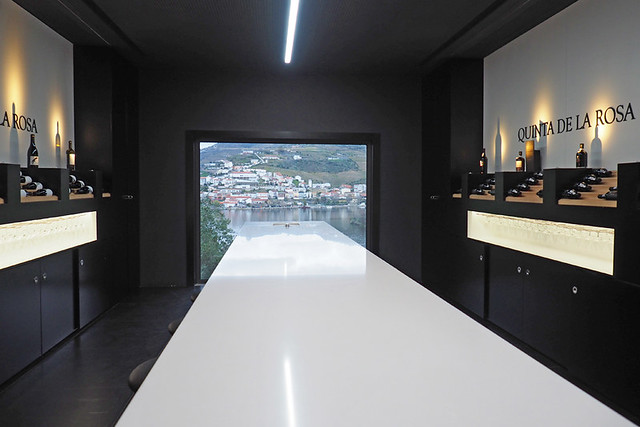 On the Douro
Which brings me full circle back to Portugal and a couple of nights at Quinta de la Rosa, a working winery – the hotel reception is also the tasting room – on the banks of the Douro River. Our room came ‘equipped’ with a selection of the vineyard’s red, white, and rosé wines. After being faced with that sort of choice we realised the usual motley crew of mini bar ingredients at the next ‘conventional’ hotel we stayed at was going to seem woefully inadequate. As an added bonus, the Quinta also has a gourmet restaurant overlooking the river. That’s our sort of all inclusive package.
Our time there gave us a deep thirst for staying in similar establishments. Before we left we were already batting between us other potential destinations for wine-themed visits.

Until we come to a decision where’s first on the list, we’ll just have to keep notching up more localised vineyard experiences. Luckily, that won’t take much effort as we stay right in the heart of Portuguese wine country. Just about every time we go out for a walk we pass an adega (winery).

Note: All of the places mentioned are open to the public.