We’re lucky. During the lockdown period we’ve still been able to pull on our hiking boots and notch up around five kilometres a day in the woods and meadows right outside our front gate. If we hadn’t been able to escape into nature there chances are we’d have gone stir crazy by now… and we’re used to working from home and being together 24/7. I can’t imagine what lockdown life is for those who have been more or less confined to urban cells. 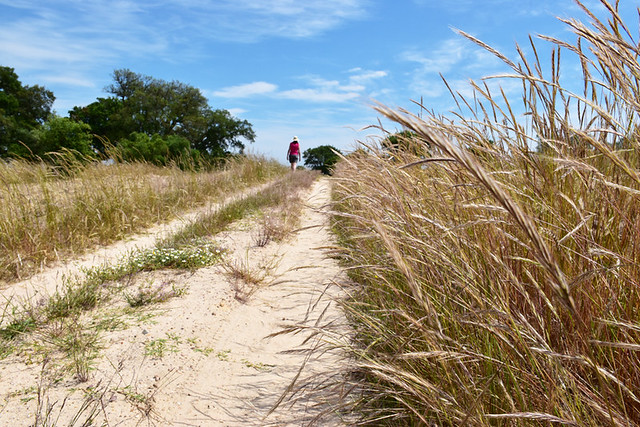 But for all our appreciation of how fortunate we are, we still grumble at the limitations. Our daily walking route involves climbing no more than the equivalent of one floor. Save for the path gradually turning to energy-draining soft sand as spring shifts gear into summer, and the sun zapping us with fierce rays on exposed sections, it’s not a challenging walk, just a yomp through pleasant farmlands. As we walk, we mourn the routes we haven’t been able to do over the last few months, wondering when and where our next challenging hike will be. We also reminisce over great walks from the past. The other day we chatted about our favourite hiking routes; not an easy task as we could compile an encyclopedia of fab walking routes we’ve completed over the last decade. After much debating and discarding I settled on this five, chosen because they were complete hiking routes; offering top-notch walking from start to finish and full of interesting and intriguing features along the way. 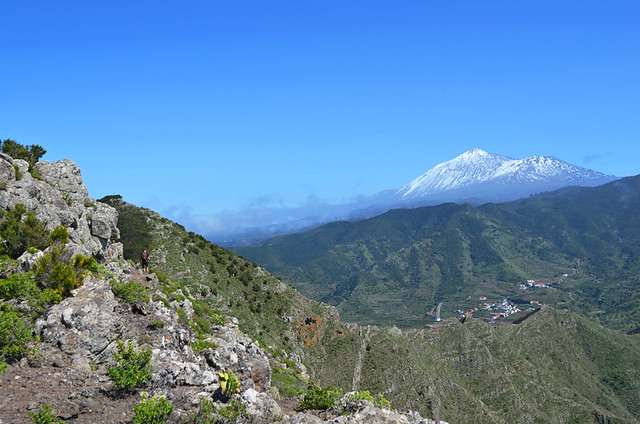 The Teno circuit on Tenerife
As well as including it in our Real Tenerife walking routes, we’ve taken numerous friends into the Teno Massif over the years as this is a hike which showcases why we keep banging on about how good a walking destination Tenerife is. It starts in the remote hamlet of El Palmar, with its odd earthy pie centrepiece, and climbs into and out of valleys and ravines; views of Mount Teide and Pico Viejo growing more epic with each upwards step. I annoyed the hell out of a friend once by telling her all the hard work was in the first hour, that after that it would be easy – forgetting the next section of the route involved dropping in and out of a series of leafy barrancos (ravines). ‘Easy walking’ in the western Canary Islands is a relative term. This is a route with one wow moment after another; from the El Palmar Valley itself to views of Teide from its most rural angle, and then across the sparkling Atlantic to La Gomera on the horizon. The trail passes goat farms and winds through a mountain hamlet, where we pick up wedges of goat’s cheese if the wardrobe-sized shop there is open, before ascending again to cross a knife-edge of a ridge on the western slopes of Tenerife – a spot which blows me away every time I reach it. 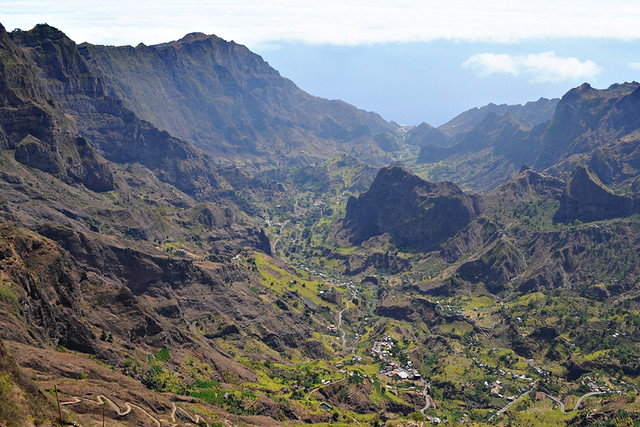 To the Paul Valley on Santo Antao
This trail on Santo Antao, one of the Cape Verde islands, nudged its way into my favourites list because when walking it I felt as though I’d slipped into the pages of an Edgar Rice Burroughs novel. It had old-school exploration written all over it. The route commenced in the bowl of a volcanic crater populated by sleepy cows and perky green peppers before rising to the crater rim where we had our first sight of the Paul Valley. Way, way below us a thin, lime-green strip hemmed in by saw-toothed mountains twisted and turned its way toward a distant sea. A snake of a path descended to the valley floor, passing thatched huts, grogue (alcoholic drink made from sugar cane) stills, and sugar cane and banana plantations where men with toothy grins hacked away at stubborn crops whilst women lounged on shaded walls beside wicker baskets brimming with tomatoes, beans and a white sweet which tasted similar to Scottish tablet. We reached our accommodation at the end of the route by tightrope-walking along a levada (water canal) which sliced a path through dense thickets of sugar cane. 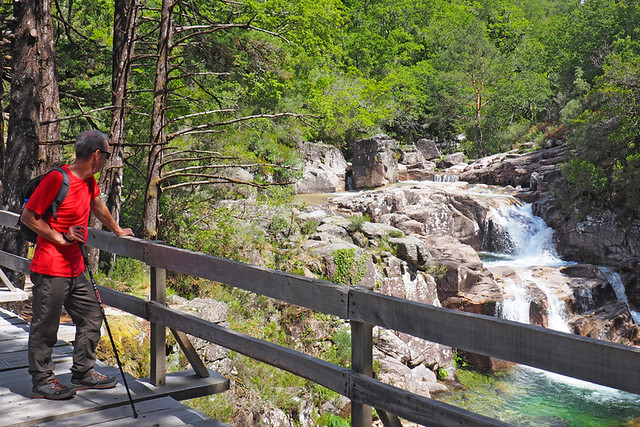 From the Spanish border to Geres
Although we found walking in Portugal to be rewarding for many reasons, it hadn’t generally had that WOW factor we’ve found in those walking destinations where the terrain can make for more challenging and contrasting routes. That changed when we were introduced to Peneda-Geres National Park, so much so one of the hiking routes we followed there made it to my top five. Starting at the Spanish/Portuguese border, the first section of the route drops through dense forest on a Roman road (some ancient markers are still evident), at times crossing a river, rocky pools, and mini waterfall before it skirts a lake whose waters conceal a sunken village. Then it changes costume, climbing into the high mountains of Portugal and a bracken covered hill-top which rewards with endless views across the National Park. The final stretch involves another change of scene, as the moor-like mountain-top with its elephant-sized boulders curves into a pine forest and a twisting, roller-coaster of a path drops steeply into the spa town of Geres, nestling amidst the trees on the valley floor. 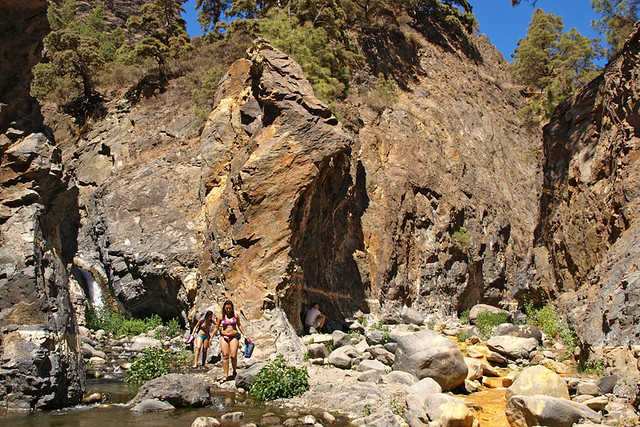 La Caldera de Taburiente, La Palma
La Caldera de Taburiente near Los Llanos de Aridane may be the best hiking route we’ve walked in the Canary Islands. It has just so many unique features… for this set of islands. Other Canary Islands can match those sections which meander through pine forests, or which traverse ridges and drop in and out of plunging valleys. What they can’t match is having to criss-cross the river which courses through the valley floor, or tributaries leading to a boulder maze, turmeric-tinted streams, and a waterfall of many colours. This is an adventure trek of a hiking route, following a path which traces a horseshoe shape through an imposing volcanic cauldron hemmed in by ragged, natural rock fortress walls. 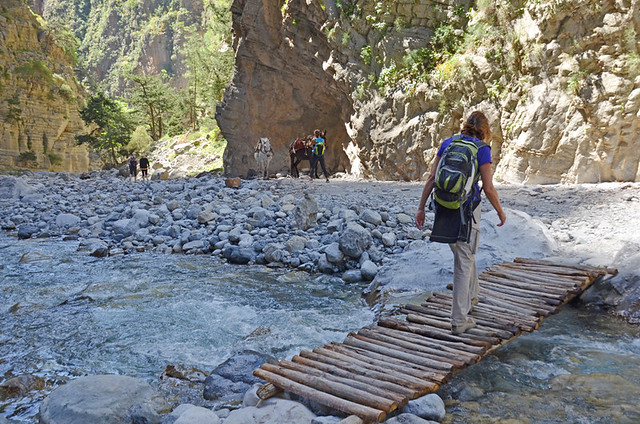 The Samaria Gorge, Crete
I mumbled and grumbled my way along the initial descent from Xyloskalo, distracted by coach excursionists whose inexperience made a steep descent riskier for others as well as themselves. They distracted me from the drama of granite walls which rose above us, keeping the sun at bay to an extent there was still snow in some crevices. After an hour we escaped the tour groups and, finding ourselves virtually on our own, discovered why Crete’s Samaria Gorge was so popular. Without crowds we could absorb our surroundings – spotting kri-kri (wild goat) on the path ahead; revelling in the shade cast by cypress, pines, oaks, and maples; being serenaded by birdsong so loud it felt as though someone had turned nature’s volume up – before arriving at a village which was once a hiding place for partisan rebels. From the village we traversed rocky riverbeds, crossed low, log bridges spanning the rumbustious river coursing through the ravine floor, and clung to the rock wall as we used a rickety log walkway to squeeze through the narrowest part of the gorge, before emerging into a softer landscape and an easy path leading to the coastal village where we caught the ferry back to our base at Sougia.

Even as I write this I’m thinking to myself ‘of all the routes you’ve walked, you’ve included one which is a tourist magnet’. There are hikes with more astounding views, and there are walks with segments which have blown my mind. But these five didn’t let up with the goodies from start to finish. However, if I were to list my five favourite walking areas, 2 or 3 of the places above wouldn’t make the list.