Portugal continually surprises. Just when we think we’ve got it nailed; seen the best it has to offer, it unwraps another layer and says “aha, but you’ve not seen this.” And so it was with walking in Peneda-Gerês National Park in the far north of the country. 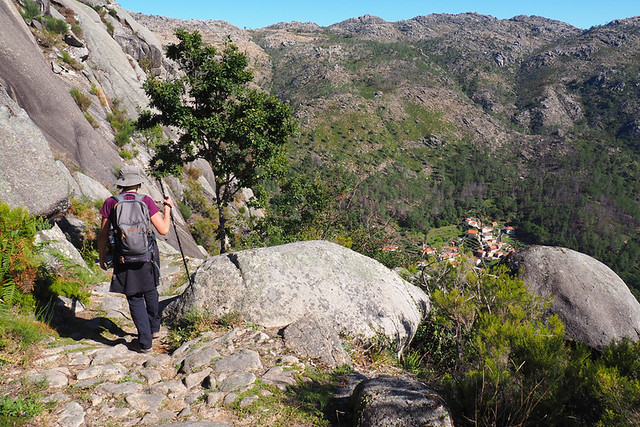 It’s so far north it can be difficult to know when you’ve stepped out of Portugal and wandered into Galicia. Portugal’s only National Park spreads south from the Castro Laboreiro to the Mourelo Plateau. It is a wonderfully wild expanse of glacial valleys, boulder-strewn plateaus, lakes and rivers, high mountains (in Portuguese terms), cork and oak forests, and tiny settlements – some with over-sized churches that draw pilgrims from far and wide.

It feels ancient and unspoilt. In 2019 we visited Peneda-Gerês National Park three times, walking from virtually one end of the park to the other. These are some of the many memorable experiences we squeezed into our rucksacks along the way. 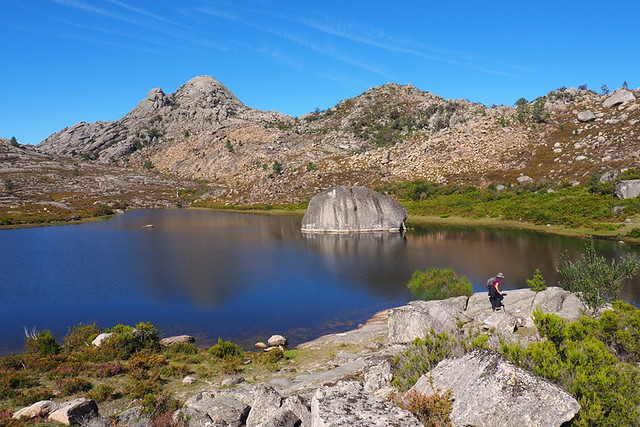 By my reckoning the landscape had already morphed twice, starting with stepped agricultural terraces hemmed into the valley floor by a dense pine forest. As we climbed dappled paths lined by stone walls draped with thick moss, the trees retreated and we ascended a bare hillside of elephantine-sized, and coloured, boulders to arrive at a rocky plateau. In the mountain’s table-top centre lay an azure jewel – a mountain lake. The surrounding border of smooth, slate grey rocks and ruddy tundra-type grasses intensified the colour of the water. Breaking the surface at one end was a giant hippo of a boulder. All in all it was an exquisite scene. From here, our path dropped like a skydiver to Peneda-Gerês, but we parked ourselves on the scratchy grass and just gawped. Peneda-Gerês had reeled us in with the first hike. 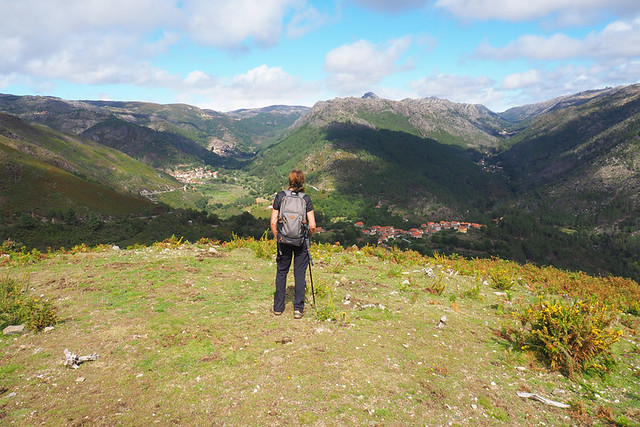 The ascent from the confluence of gurgling streams on the valley floor to a grassy hillside required some effort. As the hillside was a natural viewpoint we took time to catch our breath. From our vantage point we could see the villages of stone cottages with orange tiled roofs we’d passed through; ravines we’d negotiated; and the mountain we’d ascended and descended. Moving on, our path emerged at a road beside a farmhouse where a collie stood waving its tail. My first reaction was to say “hiya, you’re a beaut aren’t you” but I remembered what the consequences would be. Instead, I turned my back on the dog who took up a position in the middle of the road (a suicide attempt at being rejected no doubt), and warned Andy about the canine looking for walkers to hook up with. As we stood at the side of the road, recording directions, I could see every time we looked as though we might so much as glance in its direction, its tail started wagging furiously. Exercising extreme caution, so there were no mixed messages, we gave the collie a wide berth and carried on our way. It looked crestfallen. Then, when it was clear we weren’t going to acknowledge it at all, it raised its head to the heavens and started howling in anguish. I felt like a heel. 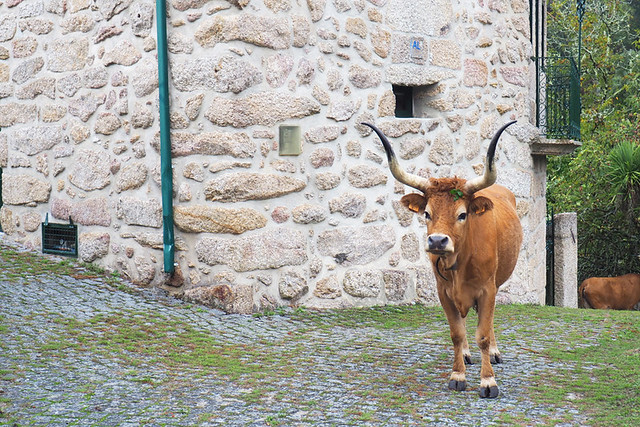 Soajo was a ghost village by the time we’d finished our meal (a typically hearty and generous Peneda-Gerês affair which included slices of duck breast in gravy, a whole sea bass, grilled vegetables and batatas a murro – punched potatoes). It was borderline eerie (due to the absence of people combined with the occasional presence of espigueiros – grain stores which look more like mini mausoleums) as we tried to remember our way back to our village house abode via Soajo’s maze of narrow alleys. Just ahead, out of sight but clearly coming toward us, came the haunting sound of a bell ringing. We stopped in our tracks, logic sprinting in the opposite direction as we wondered if a lost soul was about to appear before us. Instead of a phantom, a cachena cow and her calf came trotting around the corner. She flashed her long eyelashes at us and they continued on their way. Cachenas roam freely in Peneda-Gerês National Park. Like the area’s wild Garrano horses, the cows have priority on roads and village streets, even during the hours of darkness. 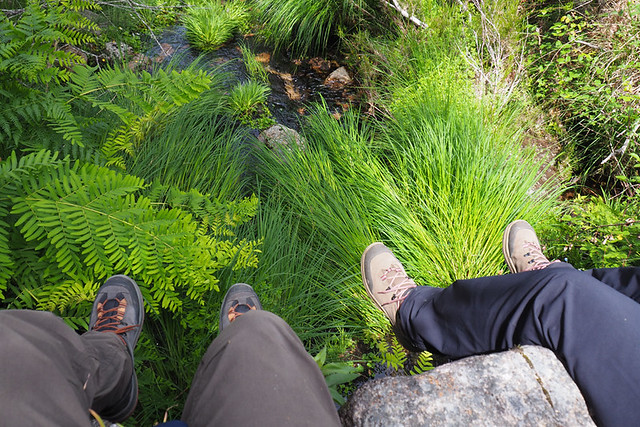 We’d walked ten kilometres and had seven more ahead of us before we reached Geres, it was time for a lunch break. An old stone slab bridge across a bubbling brook provided a smooth seat for us to park our derrières whilst we tucked into the ubiquitous hiker’s picnic sandwich (ham and cheese). The brook wasn’t as impressive as the fast-flowing rivers we’d crossed, or the turquoise plunge pools below mini waterfalls we’d admired from the wooden bridges which made the old Roman road passable. But it was a delightfully serene spot, the little bridge perfect for a game of Pooh sticks and, like most of the route, we had it all to ourselves. Dancing around our heads were electrifying, midnight blue creatures which looked like a cross between a butterfly and a dragonfly. A quick bit of Googling identified them – damselflies. Other walkers may pass this spot without a second glance, but for us it felt as though we’d briefly stepped into an illustration in an A.A. Milne book. 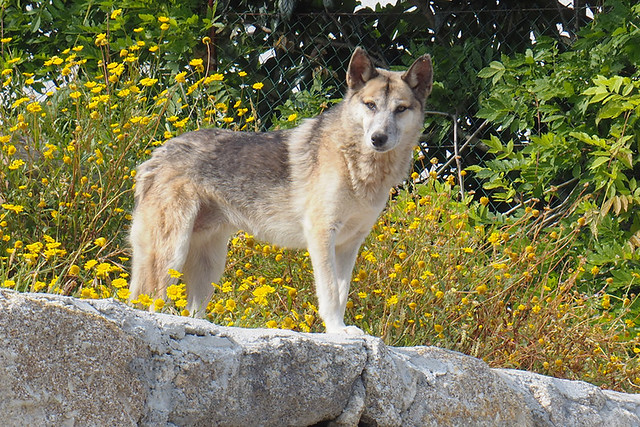 We thought coming across a huge religious sanctuary and compound completely hidden in the depths of the forest might be a spectacular way to end a journey which had taken us from one end of
Peneda-Gerês to the other, via a wee detour into Spain. But no, a couple of kilometres further on was an even bigger WOW moment that put a most satisfying full stop on our little adventure. As we approached our destination, a large and very handsome dog sauntered onto a grassy mound atop a wall beside the path and assessed us with casual interest.
“That’s a wolf,” Andy whispered.
“He does have a wolf-like appearance,” I laughed, not taking her seriously.
“No, that really is a wolf,” Andy insisted again.
We stood stock still as the noble creature looked at us straight in the eyes, yawned, and then looked away. We were of no importance to him at all.
Among its many magnetic features, Peneda-Gerês is the last refuge of the Iberian wolf. We didn’t think for a second we’d actually see one. 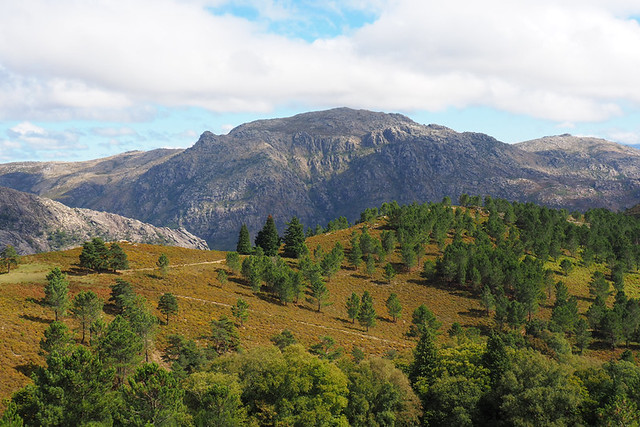 Walking in Peneda-Gerês National Park is the best hiking we’ve enjoyed in Portugal. I’d go as far as to say it is the best area for hiking in Portugal, but I’m wary of hearing that disembodied voice whispering in my ear “aha, but you’ve not seen this” at some point in the near future.