If you don’t like the weather in Scotland just hang about and a different season will shortly be along. That might not feel exactly accurate, especially to those who live there. This is, after all, the land where the word ‘dreich’ was invented. For anyone who doesn’t know what the word means try saying this “Ach, the weather’s driech today” and see what sort of scene materialises in your head. The chances are you’ll be right. 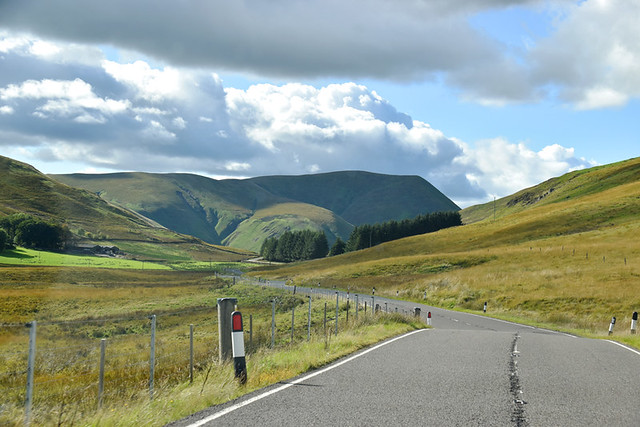 But there are glorious days which anarchically whip through Vivaldi’s violin concerti at pace, showing no respect to sequence; winter follows spring, autumn shoulder barges winter out of the way, and summer… well, summer’s the runt of the litter, only managing to get a look in for brief periods before her bullying siblings dominate again. It makes for dramatic weather, and the most exquisite light, even when half the sky is gloomy.

A trip from Scotland’s lowlands into an increasingly wild north matches the drama of constantly changing seasons; the metamorphosing landscape adding its own crescendos and diminuendos. 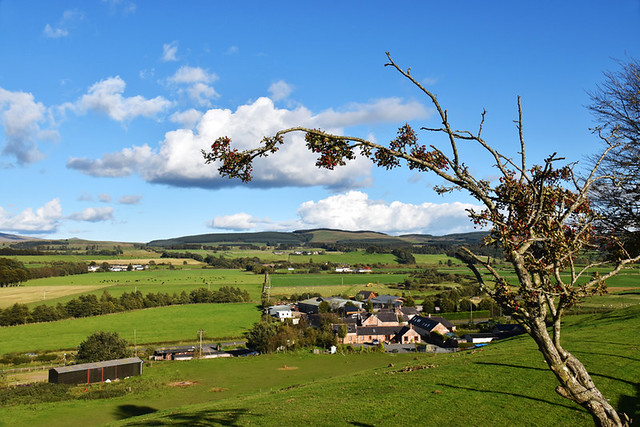 Rolling along in the borders
In southern Europe September is still summer; the sun hot, the land dry and gasping for water. On a gentle hillside near Thornhill in Dumfries and Galloway there’s a late autumnal feel. The sun is shining, but the soft curves of hills that are really just bumps with aspirations are a mix of emerald green and olive. There are even scarlet berries on threadbare bushes. This is sleepy, non-challenging walking country; a land of farmers and fields. Scotland’s right to roam laws mean we can traipse across this beguiling land without fear of incurring the wrath of any irate, tweed-wearing farmer. 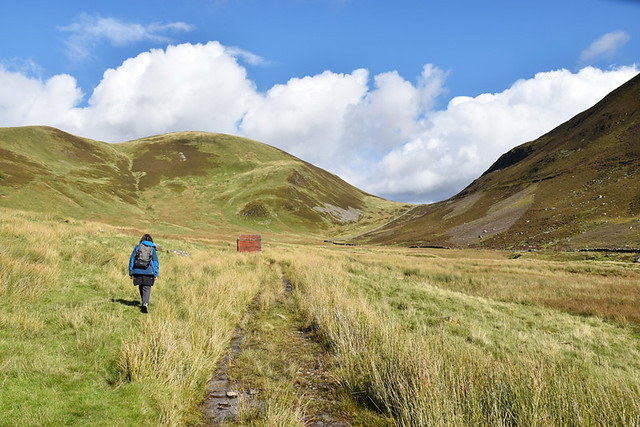 Roaming and Roman
A handful of miles further north at Durisdeer and the terrain shows signs of hardening, the southern softness holding hands with shaven hills which might be considered bleak if it weren’t for their curvaceousness and shortbread tin-worthy rustic hues. An ancient Roman road snakes through bare hills populated by sheep who perch on slopes as well as panicky partridges who forget they have wings. Underfoot becomes boggy marsh, slowing progress to a squelching snail’s pace. The terrain may look benign, but it’s a sheep in wolves clothing of a trail. We set off wearing jackets bought to keep us warm on Chilean glaciers and end in tee-shirts. 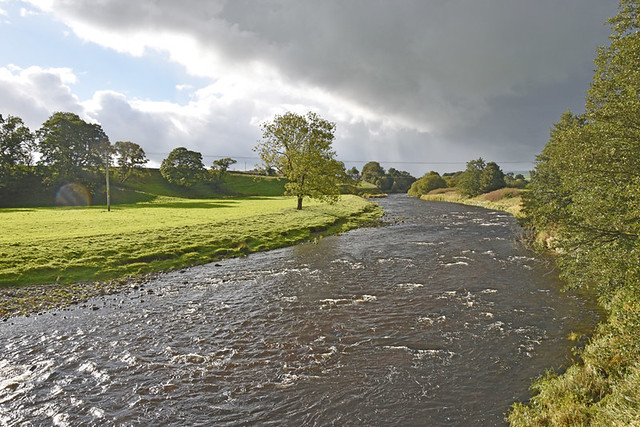 Sunshine and showers
Heading north and west we rest overnight in Rabbie Burns’ territory, a land where the countryside flows along as pleasingly as one of the Bard of Ayrshire’s poems. The sun dances on a rushing river of the sort you’d expect to find leaping salmon and men in deerstalker caps and fishing waders. In Scotland it pays to keep one eye on the sky. The pale gold orb might be smiling on us but there’s a bruised stain spreading from the east. We quicken our pace and reach the shelter of our hotel just as the first drops pitter-patter on moss-coloured pavements. Five minutes later and the river is obscured by a deluge. 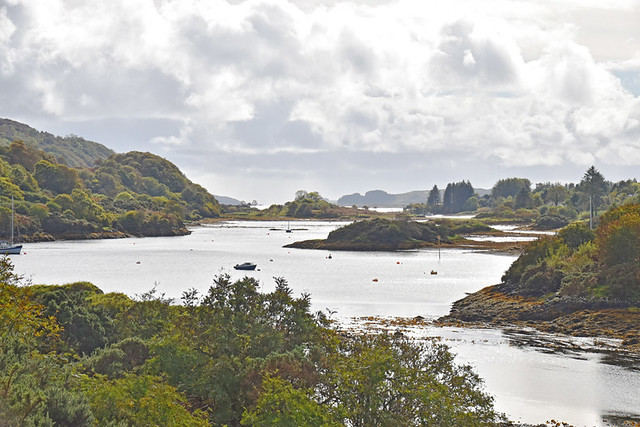 Islets and inlets
Ah, the West of Scotland. My homeland and, the industrialised Clydeside section aside, one of the most beautiful places on the planet; a wild and carefree labyrinthine coastline decorated by sea lochs, islands and royal purple mountains. Some islands snuggle so closely to the mainland you wouldn’t recognise them as being detached. Tiny, humpbacked Clachan Bridge separates one of these, Seil, from the mainland. It’s ironically known as the Bridge over the Atlantic. 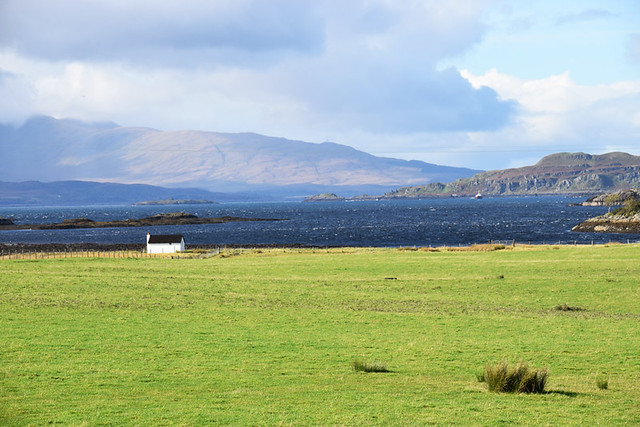 Bleak house
With each mile travelled north the land becomes that little bit more raw and rugged, views revealing a ravishing, but remote and weather-ravaged region. It is hard to imagine life in such an environment – harsh yet enchanting. Many years ago, as a fresh-faced civil servant, I had to interview people who moved to places like this, attracted by the lure of unspoiled beauty. A significant amount suffered from depression. Charmed by looks, many were simply unprepared for the reality of life in this untamed paradise. 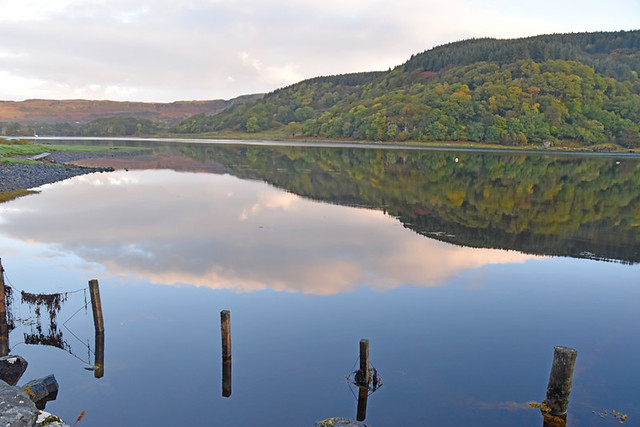 Land of lochs
Sunrise on the banks of Loch Feochan; the loch’s water is still enough to tempt Jesus wannabes to try to walk on the surface as it appears solid. I’m not an early morning person, but I can appreciate those who are; there’s a magical quality to this time of day, as though the world has been put on pause for a short period, allowing us to enjoy it all to ourselves. Soon fish will rouse themselves and kiss the surface, mallards will create V formations, and then a log-laden ship will completely shatter the liquid glass as it heads for the open sea. 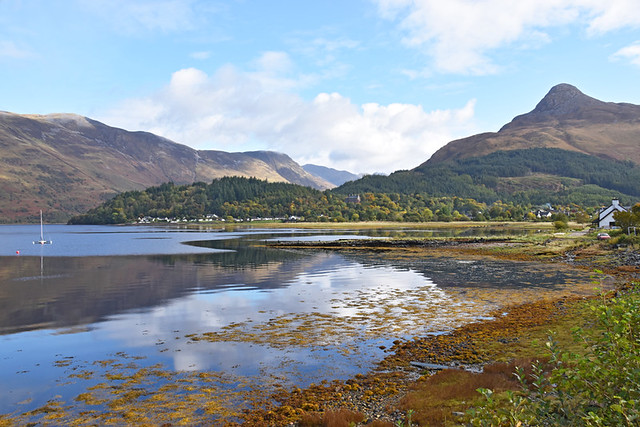 This IS Scotland
Could this scene be anywhere else other than Scotland? It has all the requisite ingredients – the loch, white cottages, heathery hills, pine thickets, and a history as dark as the deepest parts of Loch Leven. Close to here is the site of the Massacre of Glencoe when government soldiers (members of clan Campbell) acting on official orders murdered 38 members of the MacDonald clan; the very Highlanders who had shown them hospitality by sheltering and feeding them for the previous 12 days. 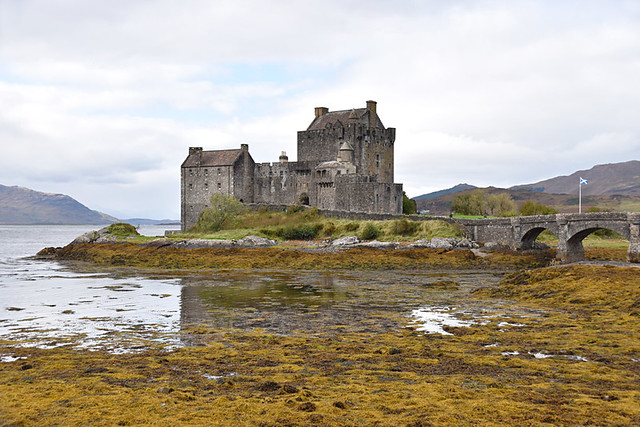 Castles on lochs
In the West of Scotland Castles there are so many castles on, or beside, lochs you can get a tad blasé about them. King of these is Eilean Donan, located where Loch Alsh, Loch Long, and Loch Duich converge. The current look only dates from the early 20th century. 200 years previously three English frigates attacked Eilean Donan during the Jacobite rebellion of 1719. The castle, manned by Jacobites and Spanish soldiers, withstood heavy bombardment for three days until a shore assault overthrew its protectors and the castle was blown to smithereens from within, using the 343 barrels of gunpowder which had been stored there. As we eat fruit slices at the cafe beside the castle, the weather changes from moody autumnal to sunny and spring-like. I prefer the autumnal look as it seems to fit Eilean Donan’s ruddy complexion better. 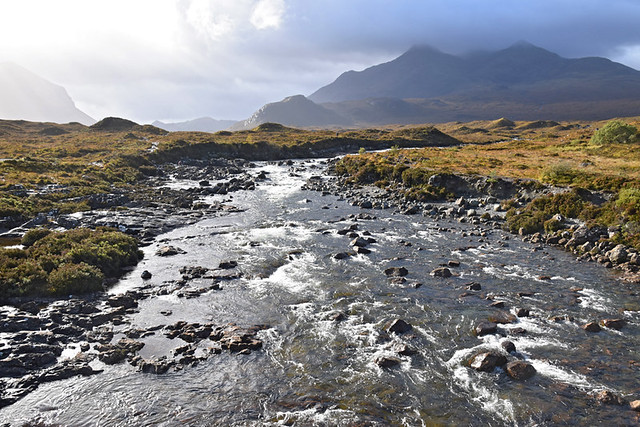 Over the sea to
Over three days on Skye we’re buffeted by bracing winds on a coral beach; seek refuge from sleety rain in a cosy café where we warm our hands on steaming bowls of pumpkin soup; skip between shelters in Portree whilst hardier souls than us queue in the rain for fish and chips; and enjoy the warmth of the sun on our faces as we walk across bracken-covered moors beneath mountains whose peaks are shrouded by ashen clouds. And it is all invigorating. I grew up on a Scottish island in the West of Scotland and therefore am not prey to romanticised imaginings of what life here would be like. And yet, and yet… 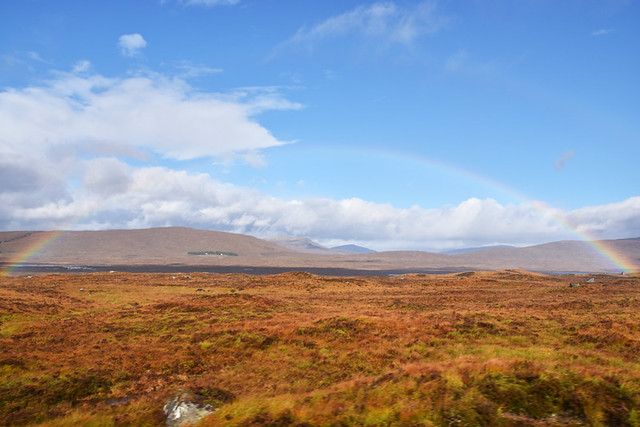 In summer-y
We turn south again, returning to Glencoe where we head east into the depths of Scotland’s most famous, and some say most scenic, glen. It’s an apocalyptic day, even as far as Scottish weather is concerned. Driving rain and dense cloud swirling and birling through the glen obscure any views. All we can see are hordes of walkers hunched against the weather’s onslaught. Even on such a dreich day Glencoe draws its admirers. The strange thing is that in many places this weather would ruin a visit, here it enhances it, adding an extra layer of mystery and drama to the unforgiving terrain. And then, the curtains open, the clouds evaporate, the sky turns blue, a rainbow arcs across the glen, and the seasons change yet again.