It’s the busiest weekend of the summer in Slovenia, so we were told in Ljubljana by rushed-off-their-feet waiters. The summer holidays are easing their way to a closure and Slovenians are making the most of their last couple of weekends before it’s back to the drudgery of work. This is why we have to queue to get into remote Logarska Dolina (Logar Valley) lying virtually at the end of the Slovenian road where granite mountains nestle against the Austrian border. To put it into perspective, queuing here means there are three cars in front of us, all pausing at a wooden hut to pay the €7 entrance fee to enjoy the valley’s natural delights. It’s a one-time fee for us as we’re staying at the Hotel Plesnik, an attractive Alpine-lodge type building in the upper part of the valley. 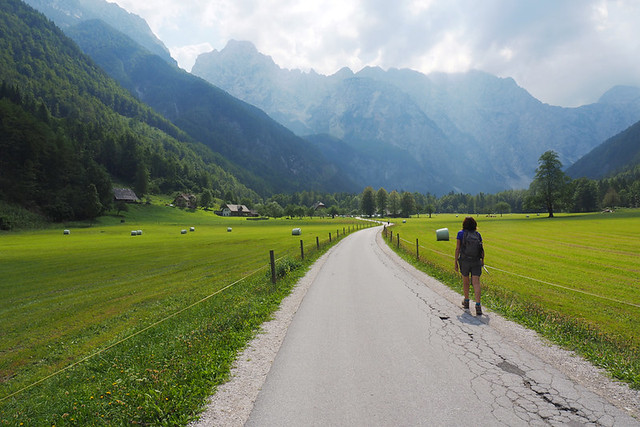 The hotel’s foyer/bar area bustles with people; a mix of smartly dressed Slovenians enjoying lunch with a view, and guests in cycling/hiking gear. It’s livelier than most rural hotels we’ve stayed in, but this is the busiest weekend of the season.

Beside the Slap Rinka waterfall
We change into light walking clothes and head deep into a glacial valley renowned for its beauty in a country where scenic splendour comes as standard. It is completely enclosed by mountains – on two sides are conifer-clad slopes, behind us are high meadows, ahead tower the saw-toothed peaks of the Kamnik-Savinja Alps. There might be a road leading to Logarska Dolina now, but once the way in was via a gap in a needle rock. Our route ambles alongside pastures before the forest wraps itself around us and the valley sheds its immaculate, Alpine meadow clothing and morphs into something wilder and more carefree. Views are obscured until we emerge at a sheer wall of red-tinged rock where a 90m high anorexic waterfall cascades into a sage-coloured pool. 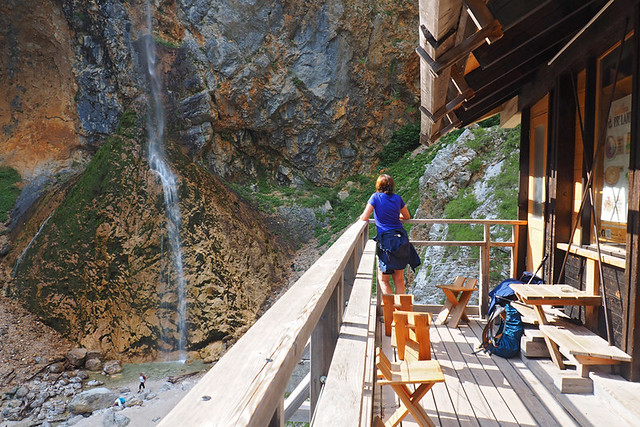 Distracting our gaze from the waterfall is a wooden structure, defying gravity on the cliff-face beside the water. A steep, rickety staircase leads to the base of the hut where another, more ladder than staircase, disappears through the wooden floor. It’s not for the vertiginous, the bones in my legs liquefy on the final section. An elderly woman runs the hut, serving light meals and snacks to the valiant ones who make the climb. We order a couple of choc ices and grab a seat on the hut’s narrow balcony for grandstand views of the falls. As I lick at my lolly it occurs to me the woman running the place has to make this climb every day. Kudos to her and those who bring supplies.

Chinese brides an eclectic gathering
Once Saturday passes, life in the Hotel Plesnik returns to being more typical of rural hotel existence – tranquil and relaxed. But there are a couple of surreal departures from the norm. At one point I look out of the bedroom window to see a Chinese couple (her in full bridal gown, him sporting a silver tuxedo) skipping down the road beside the hotel. Given the setting, it’s a bizarre sight in itself. As it’s raining cats and dogs it is especially surreal. Apparently having pre-wedding photo shoots, especially in European locations, is hugely popular with the Chinese. 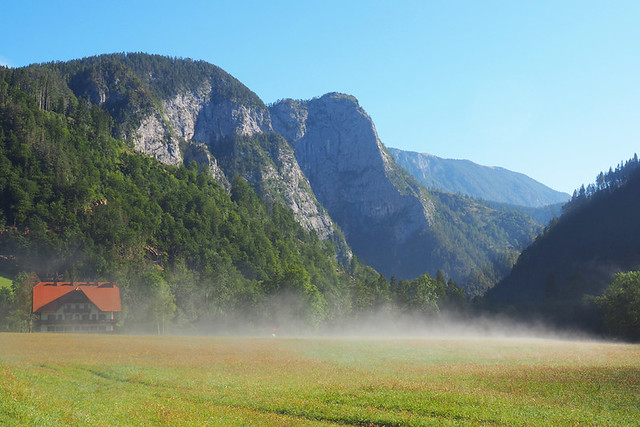 More confounding is when an eclectic group, who seem have been created from a range of international stereotypes, turn up in the hotel. As we sip post-walk beers in the bar we ponder what on earth connects two Lycra clad Italian men, who gesticulate flamboyantly and talk loudly as they stroke designer stubble jaws, with a brace of quietly spoken Japanese men wearing neat business suits, and a Russian man and women flashing too much gold and decked out in garish outfits that are no doubt expensive but which look cheap. The puzzle eats away at us until our nosiness gets too much. Nina, the hotel’s owner answers our questions about who they are; ski jump judges, scouting the area for potential jump sites.

Championing Nature
Over the following days we develop a feel for Logarska Dolina. Its inhabitants are fiercely protective of their environment, especially the younger ones who have taken over the custody of the valley. That doesn’t mean they are unfriendly where visitors are concerned, quite the opposite. They simply strive to ensure nature and traditional life in the valley is respected. We meet up with a local guide, Mojka, whose family own a farm. Our ‘walk’ starts with tea made from herbs picked on the farm, a generous slice of apple strudel and a basket of freshly baked rolls with jam centres, all courtesy of Mojka’s mum. The purpose of our meeting is to determine whether a guided walk with a theme of identifying wild herbs would fit in with the Slow Travel holiday we’re helping put together for Inntravel. 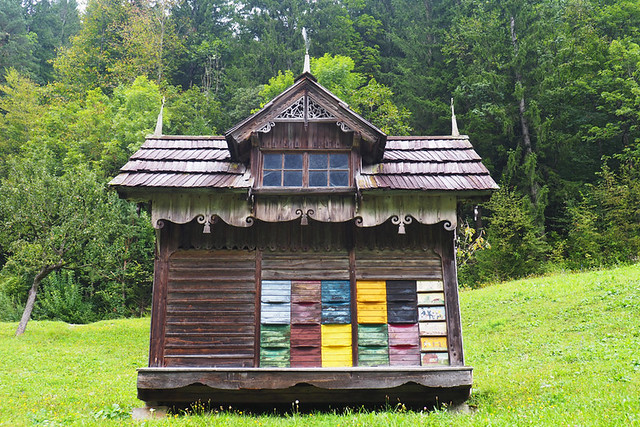 Mojka herself exudes that attractive Slovenian personality which manages to blend forthrightness with being charming and funny. As we amble across her family’s fields the conversation flows as freely as the water cascading past the farm’s old mill. She’s a pragmatic protector of the environment, one who knows nature and the symbiotic relationship between humans and the earth. She talks of the land, traditions, life in the valleys past and present – pointing out exquisitely carved beehives whilst recounting how a relation was always being thrown in jail because he was politically outspoken; picking at wild thyme as she tells us how the farm used to be much bigger but was split between family members during Communism to stop the state confiscating swathes of land. It is hugely insightful on many levels and adds context to our explorations. 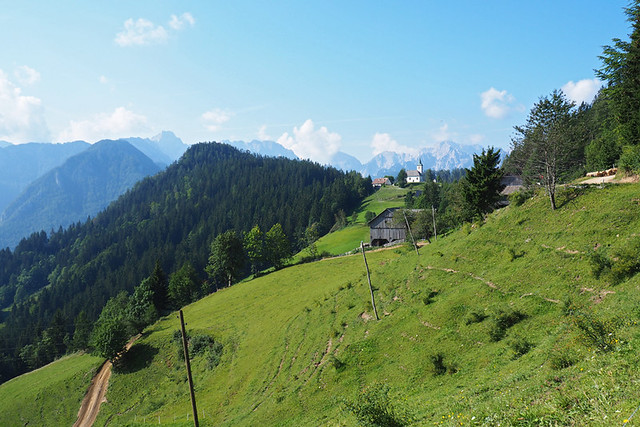 Mountain men, pigs, and orange water
Hikes in Logarska Dolina aren’t just scenic jaunts, each comes with quirky little add ons; like an encounter with a trio of squealing, happy pigs at an empty dairy farm in the depths of neighbouring valley Robanov Kot which ends when one of them tries to eat Andy’s boot. At Grohot hut we get shouted at by a mountain man, who’s a mountain of a man, because we walk into his hut with dirty boots whilst clacking walking poles on his polished tiles. Behind the brashness he’s a cuddly bear, serving us steaming coffee in tin cups and warning us about the dangers of attempting a route we’d been told was an ‘easy stroll’. It doesn’t take us long to twig that because the locals are so used to yomping around these mountain slopes, every walk is ‘easy’ even when it isn’t. 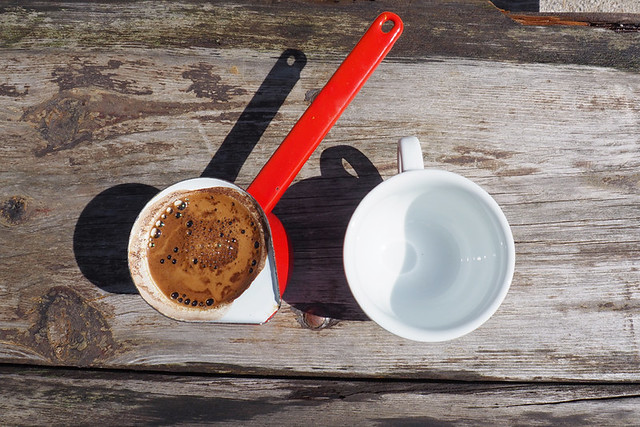 Toward the end of a steep climb through the forest to the mountain hut at Klemenca Jama (which, incidentally, has a great selection of schnapps) we see our return route – two planks fixed to a cliff-face. At least there’s a steel wire to hold on to. Having some trepidation about tackling this, I ask the young female proprietor at the hut whether it’s a safe route to attempt. She waves away my concerns with a nonchalant “it’s easy.” Of course it is.

On the aptly-named Panoramic Road we find a spring spouting water which has turned the surrounding rocks orange. The water is supposed to possess healing qualities, so we drink some – it’s sweet and metallic and has a slight fizz; it’s actually very pleasant. Metallic and orange, it could well be the source of Irn Bru. 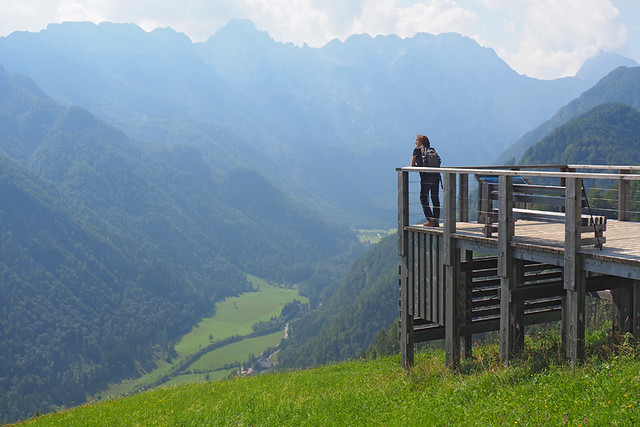 And so, in this fashion, time in Logarska Dolina breezes past far too rapidly. We’d had concerns about spending eight days in and around one small valley. However, Logarska Dolina cast its spell on us. It’s an exceptional and special place – an enchanted valley.