We didn’t immediately hit it off with Freiburg. It wasn’t the city’s fault, just circumstance.

A tight time schedule meant that most of our day had been spent devising a walk from Schauinsland to Kirchzarten where we then had to grab our luggage from our hotel, hotfoot it to the station and make our way to Freiburg. From there we had to drag our cases through cobbled streets – lovely to look at but not good for pulling cases on wheels – from Frieburg Banhof to the Hotel Oberkirch next to Münsterplatz in the altstadt (old town). The distance was substantially longer than we’d anticipated. 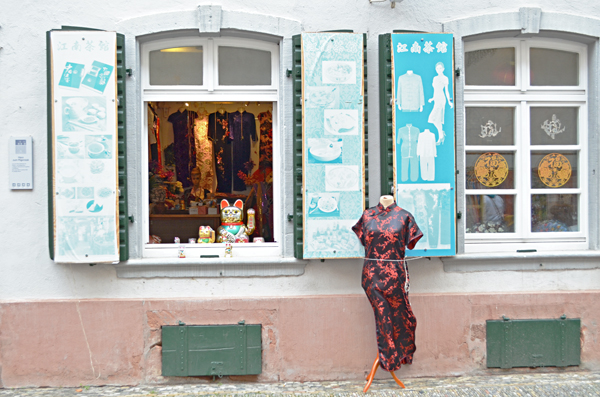 We’d had to miss lunch, were tired and felt grubby after having walked in the forest all day. All we wanted was to get to our hotel so we could dump our luggage and grab something to eat.

Later we discovered the tram would have taken us from the train station to a stop not far from the hotel, but hey ho discovering how a city works is all part of the fun of a first time visit. The bottom line was there was a lot of grumbling as we rattled our way through the what-should-have-been-charming streets. Freiburg had a bit of work to do to win us over. 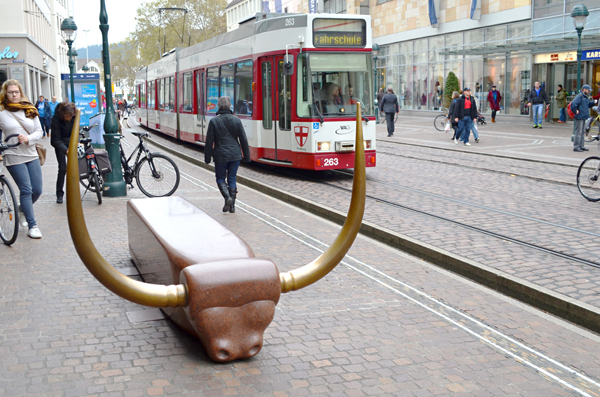 The Hotel Oberkirch is in a perfect location for exploring the altstadt, but it was too late in the day for any in-depth wandering. We picked the first café we spotted, in the Breuninger department store adjacent to Münsterplatz, and ordered a coffee and a cake. The coffee part was almost instantly regretted as it soon became clear the chic café/wine bar was the place to sip a glass or two of post-shopping champagne.

As we had a lot of planning to do for the following day’s exploration we didn’t wander far to find a restaurant for dinner. Nearby Gasthaus Zum Kranz (Herrenstrasse) turned out to be a perfect introduction to Freiburg gastronomy; cosily warm, a convivial atmosphere and a smiling waitress who helped us negotiate the menu to make some supremely tasty choices (ravioli with pork and suckling pig and an aristocratic apple strudel to finish off). 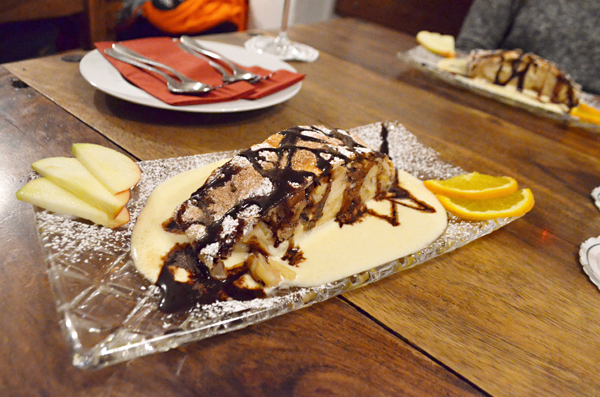 Exploring Frieburg Altstadt
As our hotel was right on Münsterplatz we were straight into the early morning action as soon as breakfast was scoffed, seeing the daily market stalls of fruit and veg, wines and honeys, cut flowers and scented lavender charms being set up before the crowds arrived.

We wandered around the great Münster looking for curios we’d been told about; the elaborately decorated entrance, a spot where carvings etched into the stone showed exactly what size bakers’ bread should be, and gargoyles who are said to irreverently have been placed so their bare bottoms are directed at the bishop’s house. 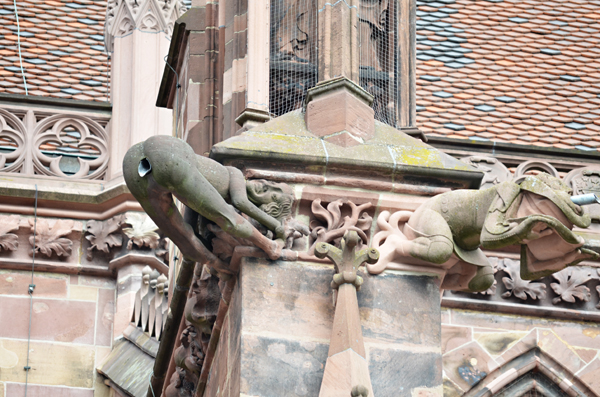 When exploring historic towns and cities we prefer these little oddities to the grand structures. The most engaging stories are often found in quirky little details.

Our planned route took us out of the Münsterplatz and past the Bishop’s Palace whose grand entrance features a door which would be perfect for a Game of Thrones set.

On Konviktstrasse we failed to find anyone who could point out the house where the convict who was supposed to have given the street its name, but it’s a pretty street filled with interesting little shops and worth a wander. 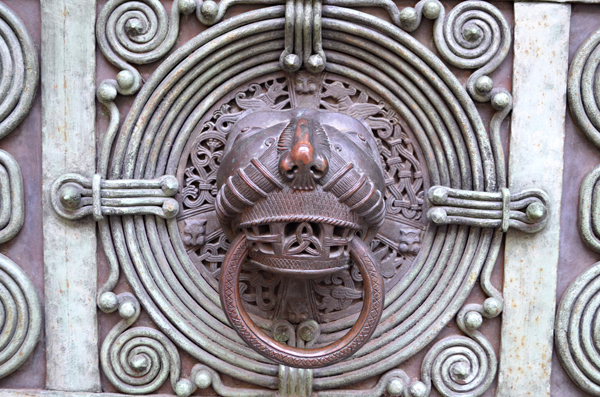 Konviktstrasse ends at the Schwabentor, a tower which is more or less where the Black Forest descends right into the old town. A couple of days later a route from Kirchzarten brought us back to Freiburg at this point. Stepping from dense forest into the heart of an historic old town is a much nicer way to arrive in a city than via homogeneous suburbs.

By the time we strolled along Gerberau with its wine cellars, crocodile (yes, you read right) and mini canals lined by bicycles we became aware there was something missing from Frieburg’s streets – cars. Although bustling with people, the altstadt was unusually quiet for a city. Anyone who wasn’t actually walking was either travelling through the old streets by tram or on a bicycle. Freiburg calls itself a green city and it doesn’t take long to learn it isn’t a hollow claim. 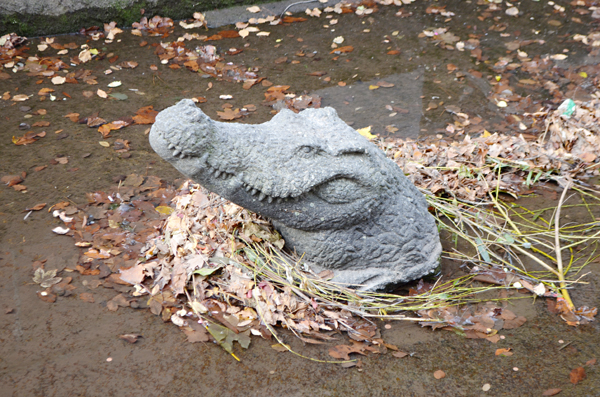 It’s one of the most relaxing cities we’ve wandered around, the car-free streets are soothingly calming. Being a university city, Freiburg also has a youthful personality; it feels both studious and fun-loving at the same time.

As we’re food market addicts we’d planned to have lunch in the Markthalle (between Gerberau and Grünwalder Strasse), an indoor gastronomic arena of food stalls and bars which is surprisingly hard to find if you don’t know where it is. Even on a weekday it was packed to bursting point by the time we found our way there via what looked like the entrance to a shop. With no seating places available we had to watch enviously as people passed us with huge plates of food involving cuisines from various corners of the globe. 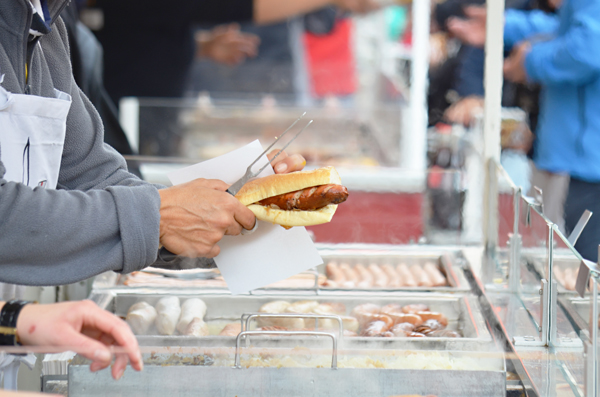 Sausage-munching over, our route took us over Kaiser Josef Strasse with its Germanic version of High Street department stores (useful for Andy to pick up a little black number for the BGTW awards dinner during the World Travel Market in London), and past the town hall. One of the interesting features on the cobbled streets is that outside some buildings there are images inlaid into the stones which depict the occupation of the person who once lived there. Some aren’t as easy to identify as you might think. 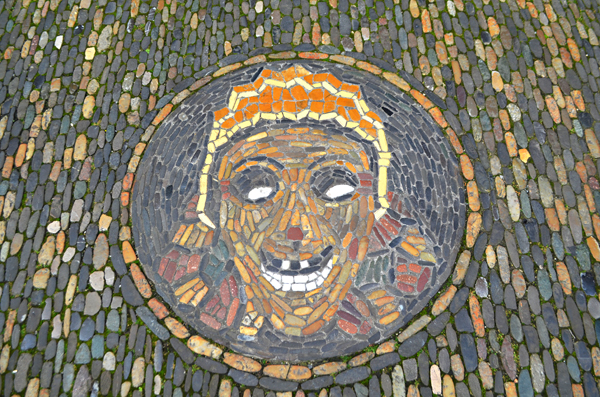 Another Freiburg feature which unlocked memories of childhood were roadside stalls selling bächleboots – little boats which children traditionally sail in the wide gutters lining some streets.

Our wanderings ended in the Statdtgarten, an artistic little park with sculptures and pools where bold herons were unfazed by Freiburgers enjoying a bit of greenery. A funicular at the Statdtgarten leads to the Schlossberg where a 30m tower offers views across the city to Kaiserstuhl. 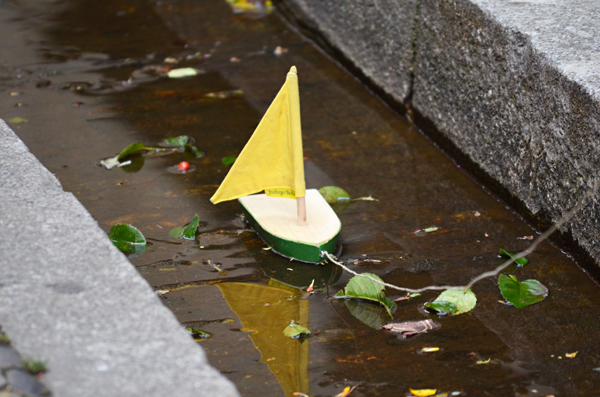 We didn’t take it, we had another self-made appointment.

By late afternoon the lunchtime crowds at Markthalle had been replaced by the jovial, post-work brigade toasting the end of their working day. We joined them, taking up position on stools around a rectangular open bar in the centre of the hall whilst a barmaid poured us two generous glasses of coppery wine from a pump. We decided we like Freiburg a lot. 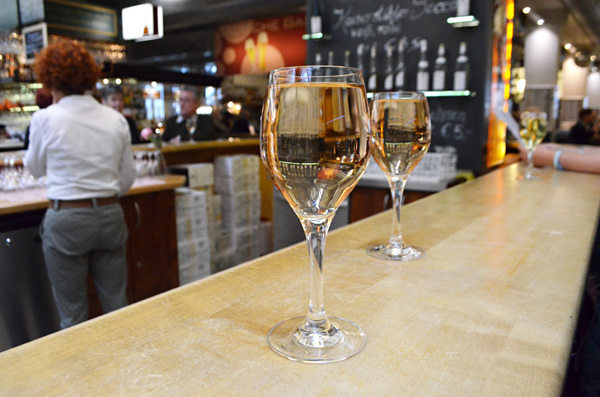 Historic, green, quirky, smart, picturesque fun, great food (I couldn’t fit in the wild boar sausages) and easy to get around. Small and beautifully packaged, what is there not to love about Freiburg’s altstadt?